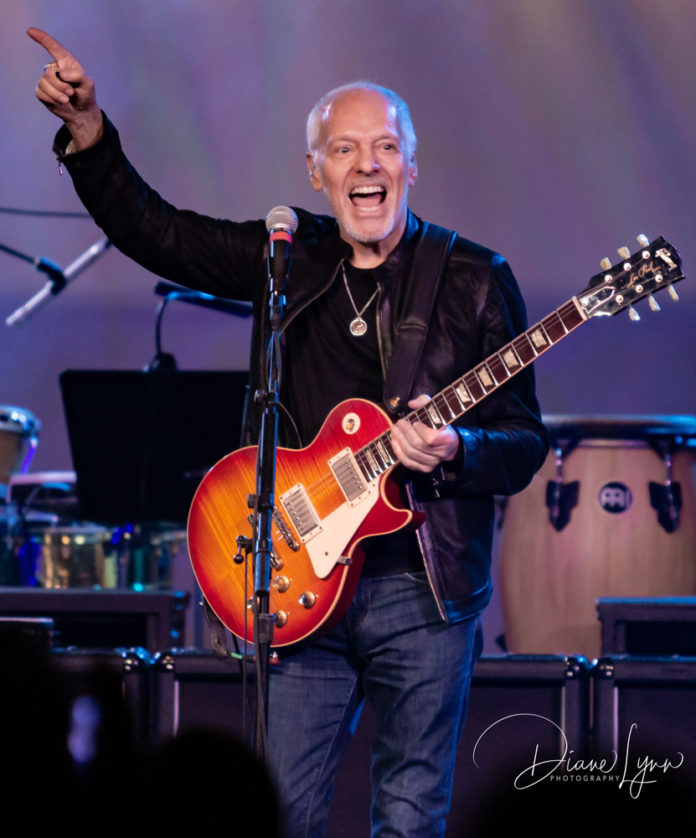 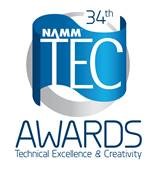 The NAMM TEC Awards was an evening of laughter, surprise and a sense of fulfillment for those in the technical field. Without these folks who spend countless hours testing new ideas, pushing the limits on creativity and providing the movie, television and music industry with the latest and greatest in technology, the entertainment industry as a whole would fall flat.

It was exciting to see the faces of the winners as their names were called, high fives all around for the team members/coworkers and then walking to the stage with a sense of pride and accomplishment to receive their award. 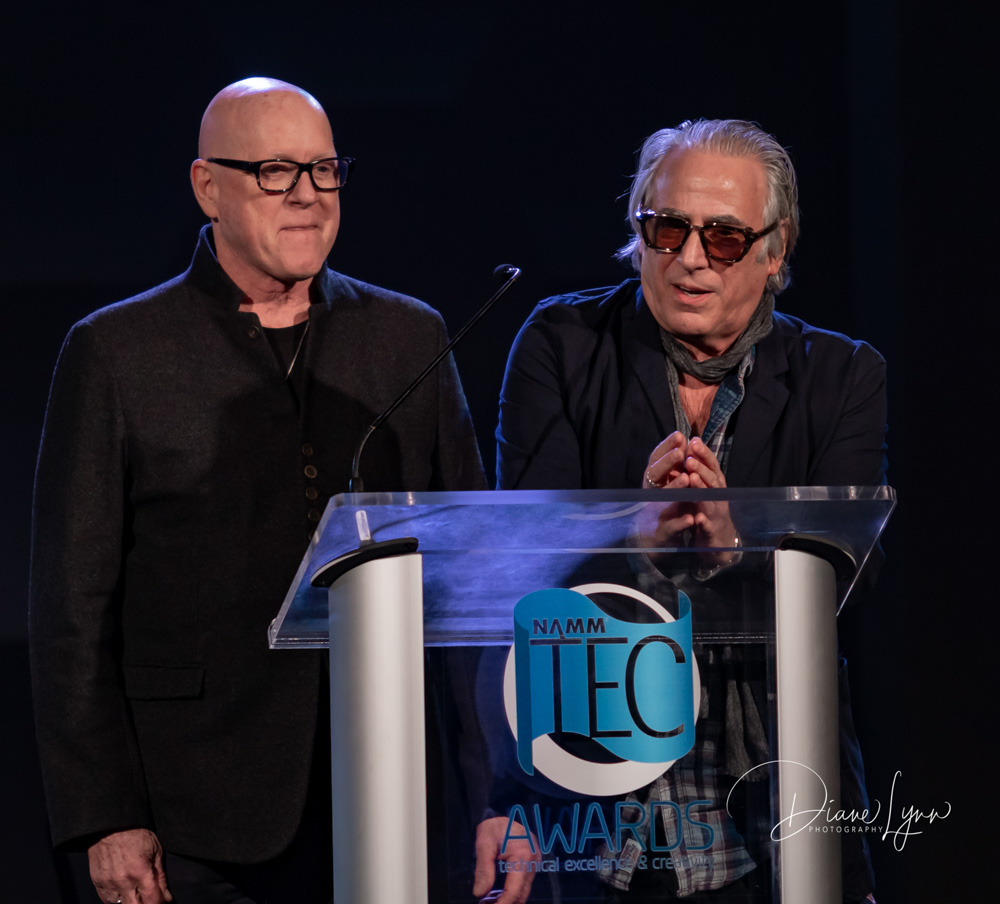 The host for the night, Demetri Martin kept the mood light and festive with quite a few laughs in between the awards presentation. The hosts kept the ceremony moving at a steady pace while also allowing ample time for the winners to thank their friends, family and peers. 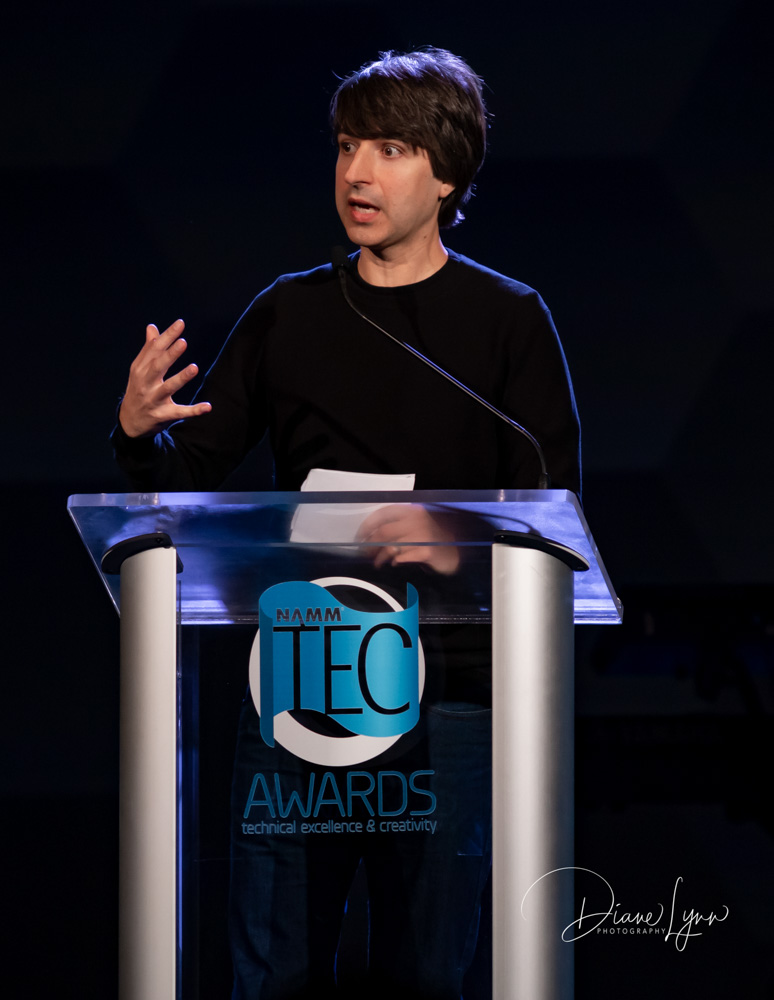 The two main events of the evening were Leslie Ann Jones being inducted into the NAMM TEC Hall of Fame and Peter Frampton being honored with the Les Paul Innovation Award. 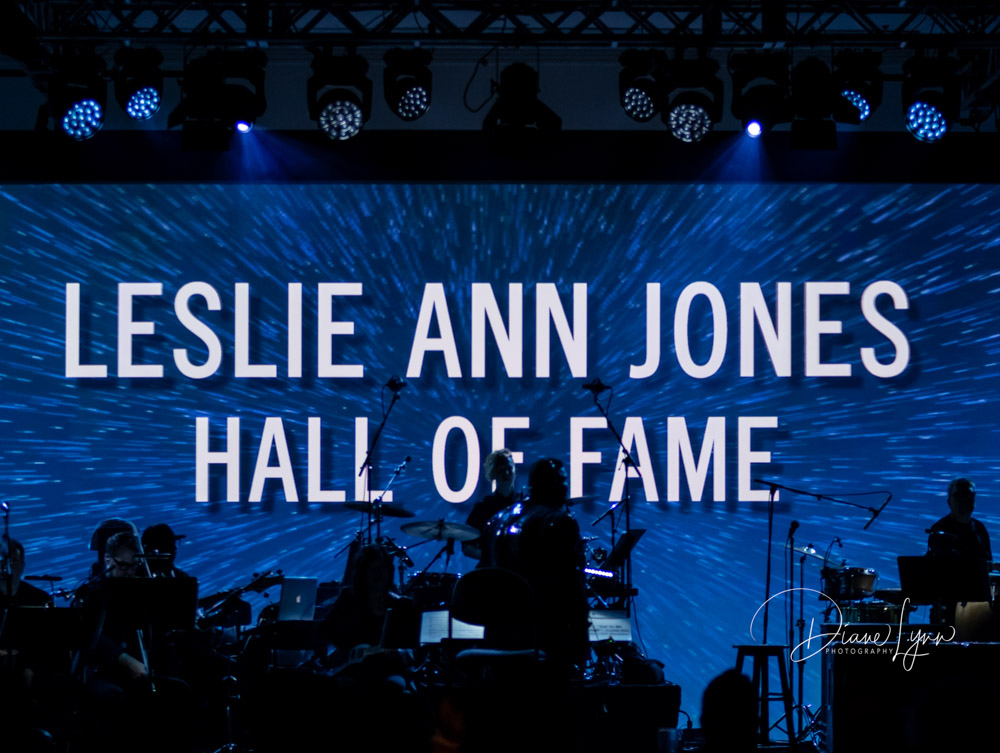 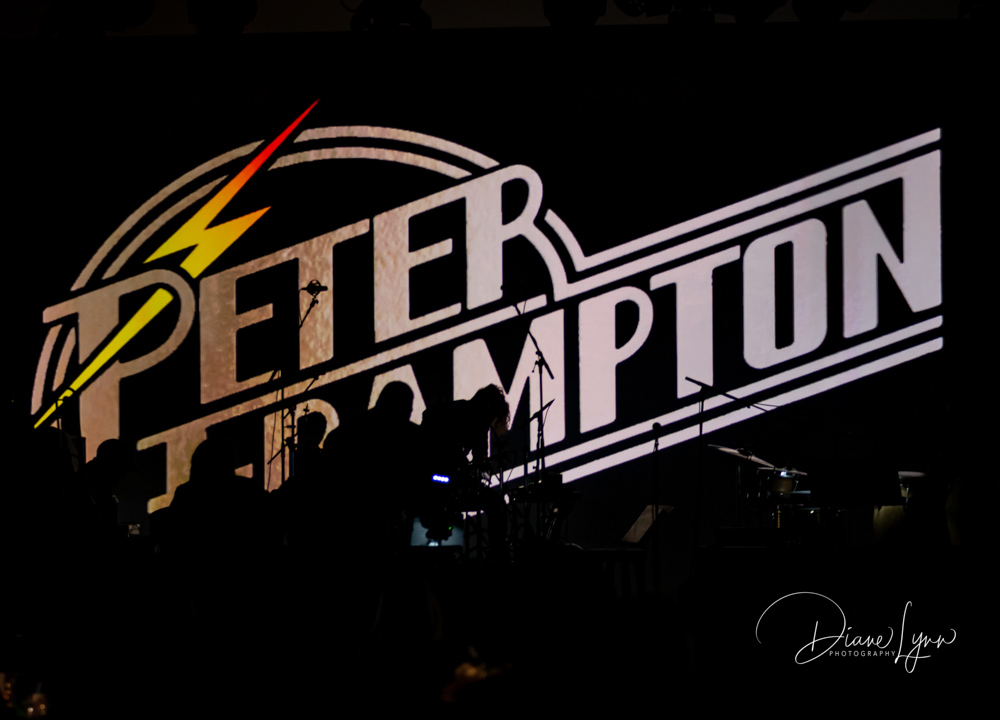 Peter Frampton treated us with a mini jam, playing a few of his classics, but the one that tugged at my heart stings was his beautifully played version of “Black Hole Sun” which he dedicated to the late Chris Cornell, his wife and daughter. Peter is truly an amazing guitarist, one who definitely deserves this recognition and I was grateful that I was there to witness the presentation.
Here are the details of the awards and winners of the night provided by the NAMM TEC Awards. 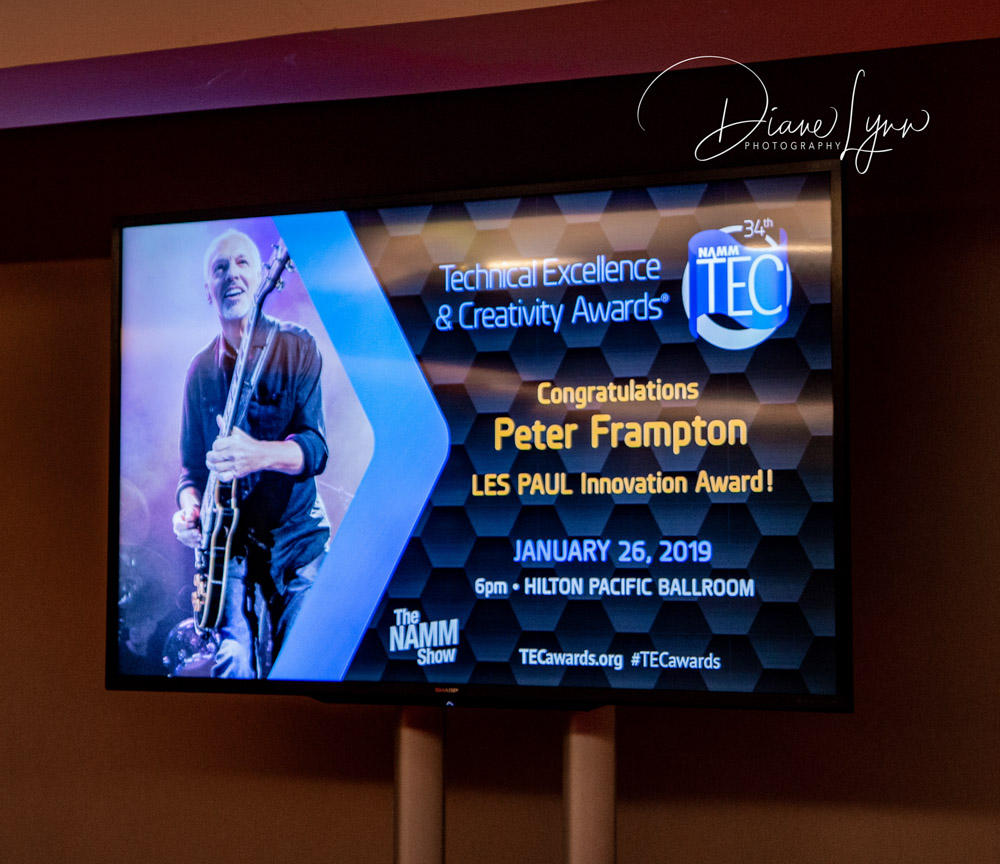 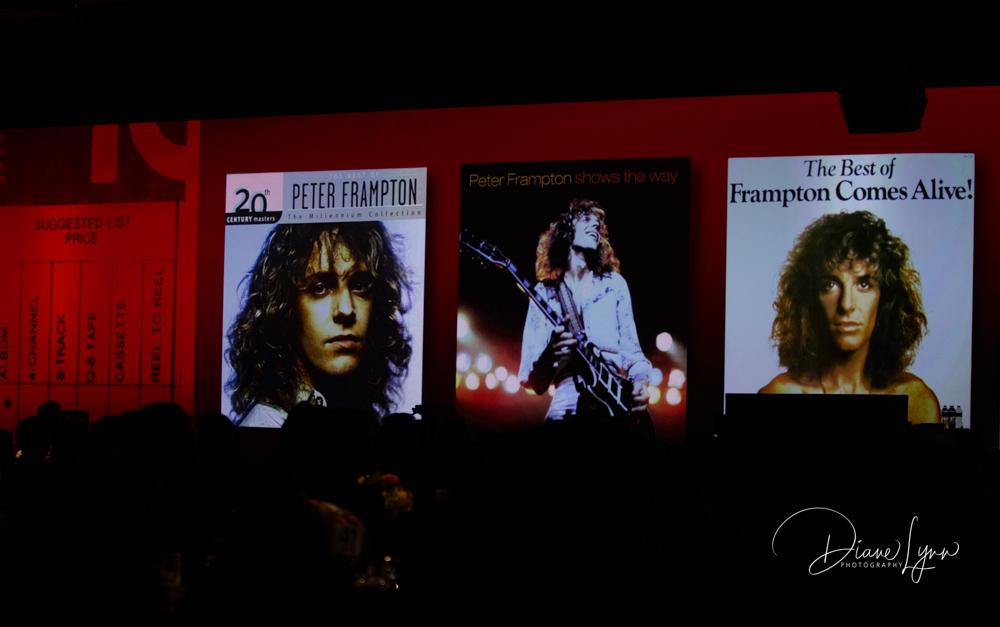 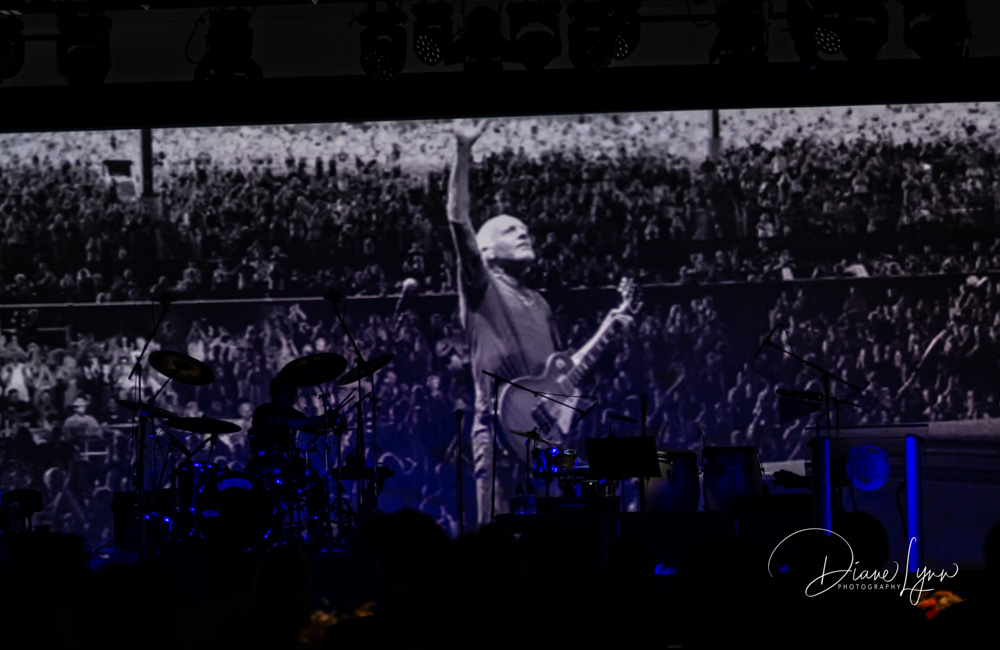 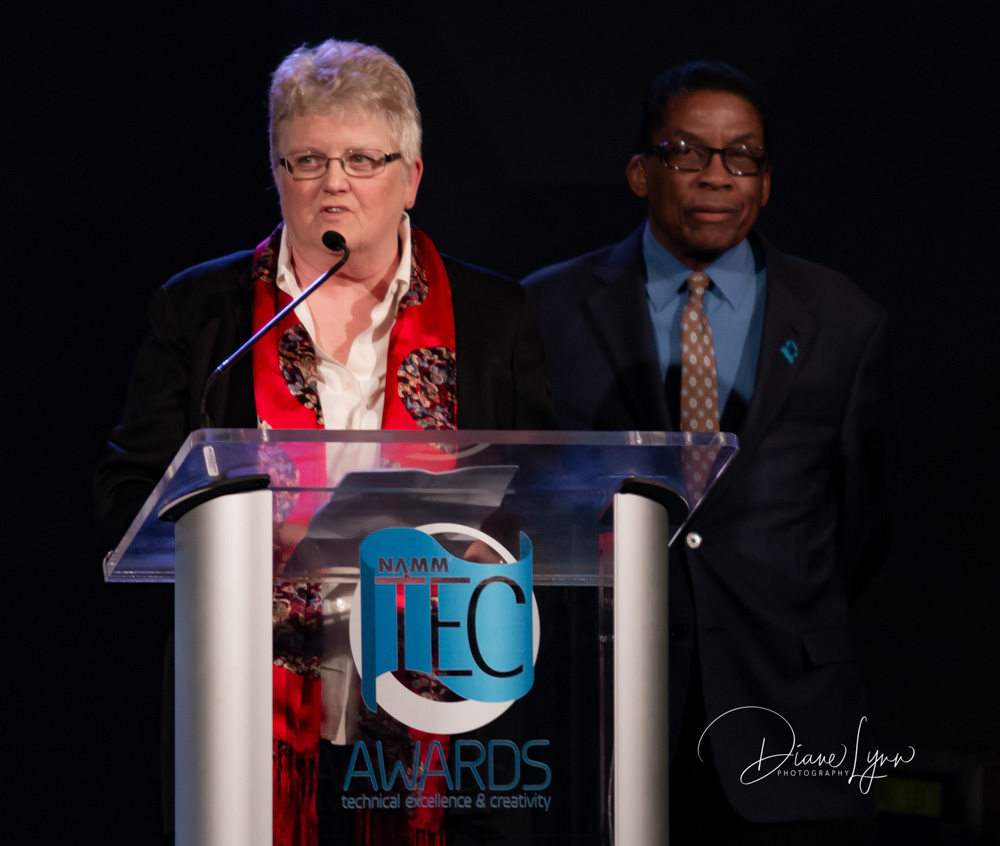 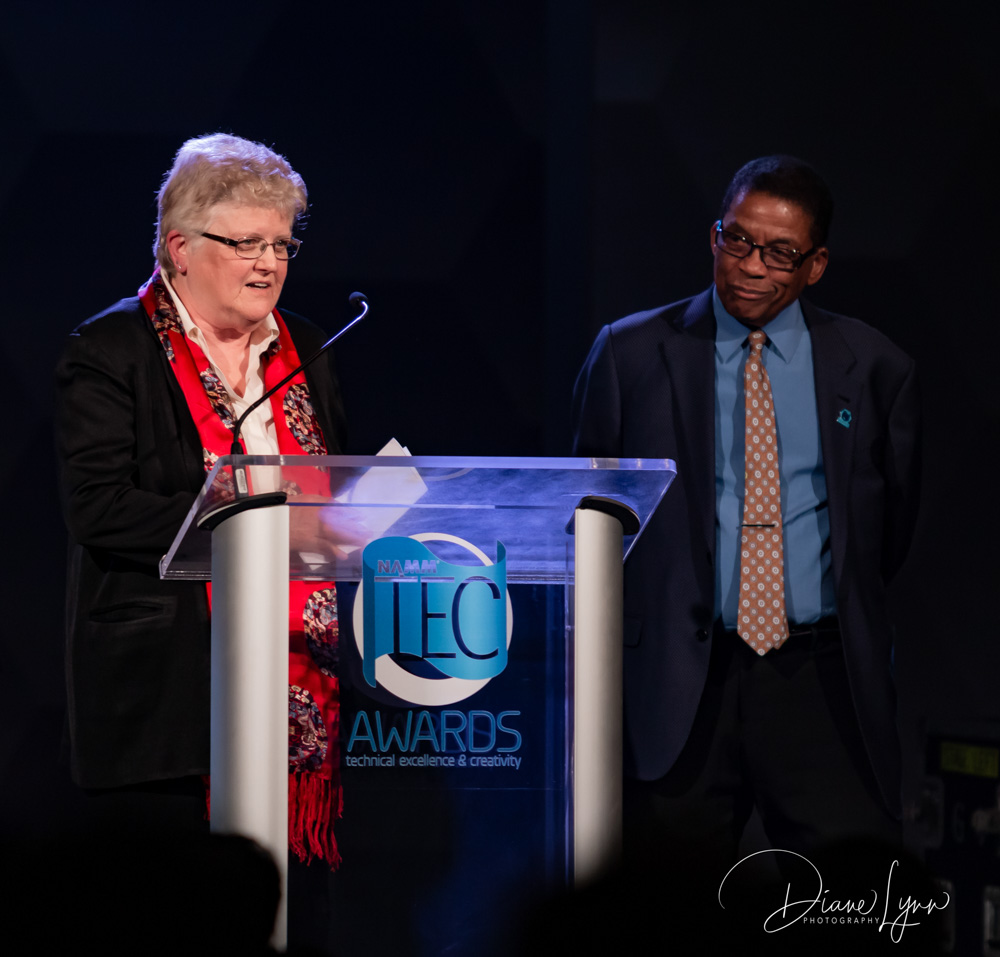 Winners in 23 technical and eight creative excellence categories were announced at the 34th Annual NAMM TEC AWARDS, Saturday, January 26, from the global NAMM Show in Anaheim, CA. Presented by The NAMM Foundation and held annually, the event recognizes the exemplary achievements and innovations behind the sound of recordings, live performances, films, television, video games and multi-media. Comedian Demetri Martin returned as host. 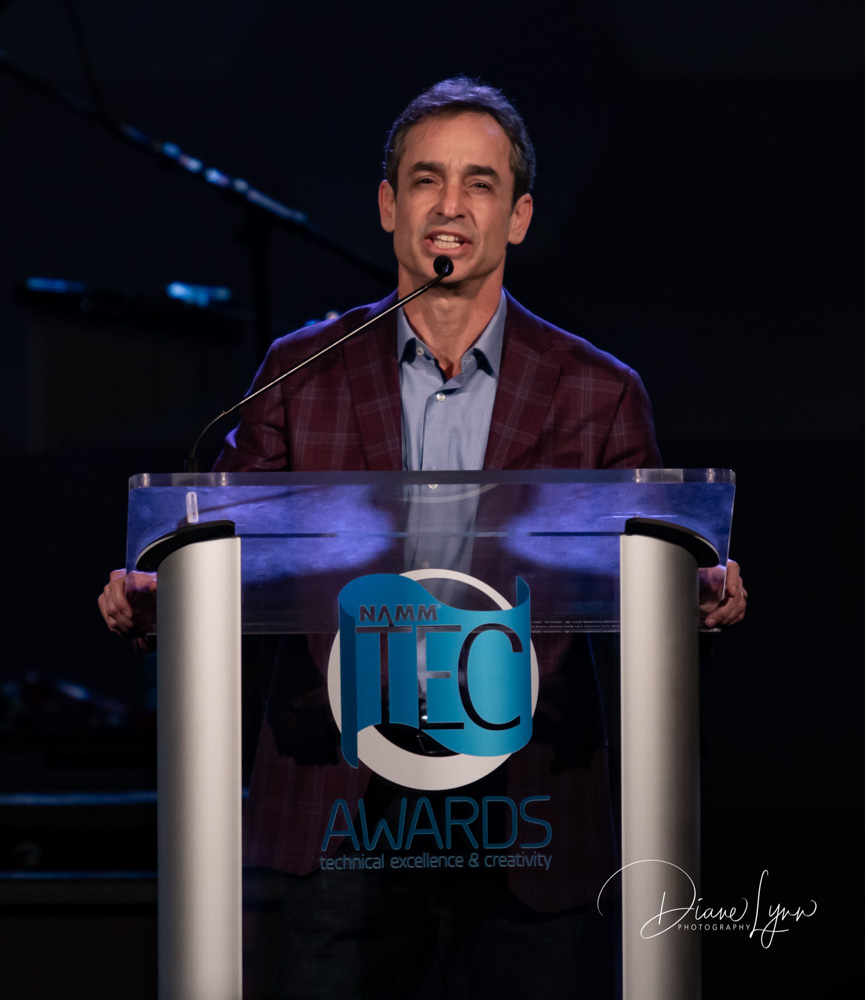 3 Series MkII under the Studio Monitors category, and in Sound Reinforcement Loudspeakers for the company’s VTX A12W Line Array Loudspeaker. Creatives behind Game of Thrones continued their encore appearances on the NAMM TEC stage year-after-year, this time under the best in Sound in Television Production winner’s spot, as a part of the projects chosen for Outstanding Creative Achievement. The 60th Annual GRAMMY® Awards (CBS Television Network), picked up another win for Remote Production/Recording or Broadcasting, after sweeping the same category the prior year. 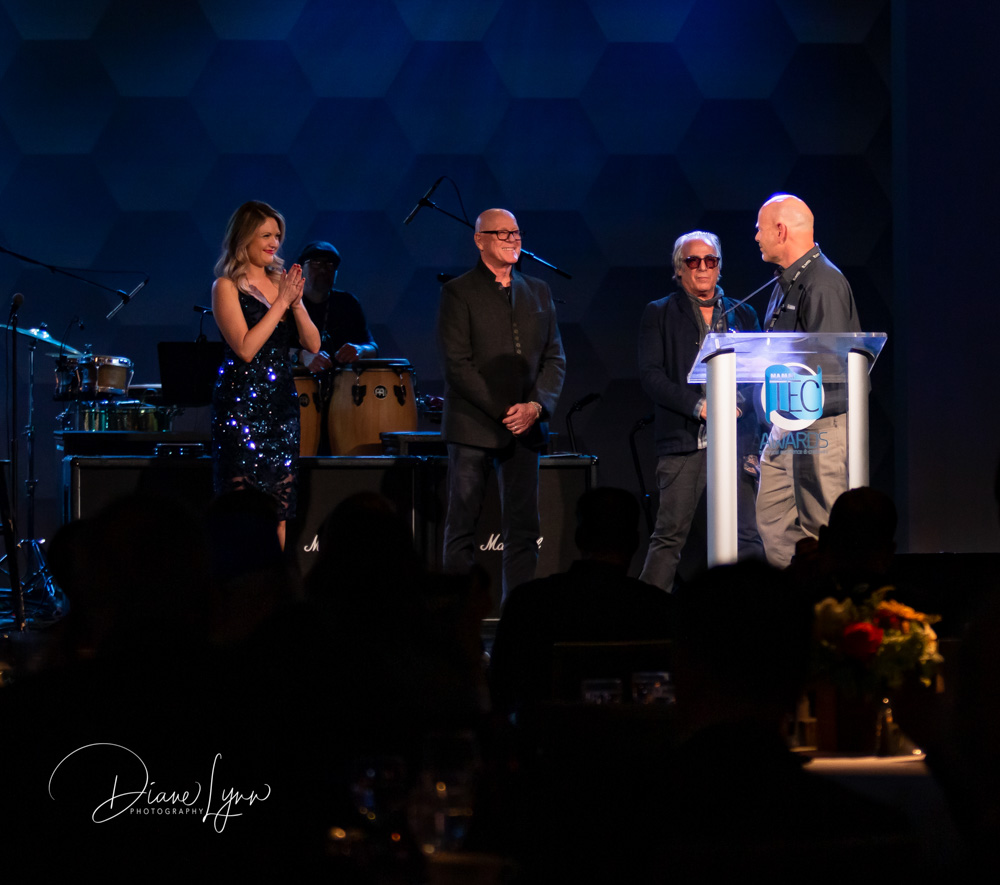 Proving the NAMM TEC Awards is one of the best nights in music, songwriter Steve Lukather was on hand to introduce GRAMMY award-winning guitarist, singer-songwriter Peter Frampton as the newest recipient of the Les Paul Innovation Award. After rocking the hall with several classics that included “I Want You to Love Me,” and “Blackhole Sun,” dedicated to the late Chris Cornell, Frampton remarked, “Les Paul was the godfather of modern recording, the most innovative of guitar players, and the creator of what we do. It’s a debt we all owe him. Whatever I’ve done to win this amazing recognition started with Les. Les showed us that innovation isn’t about high tech or money – it’s about ideas and using the tools at your disposal to make music in ways it’s never been made before.” 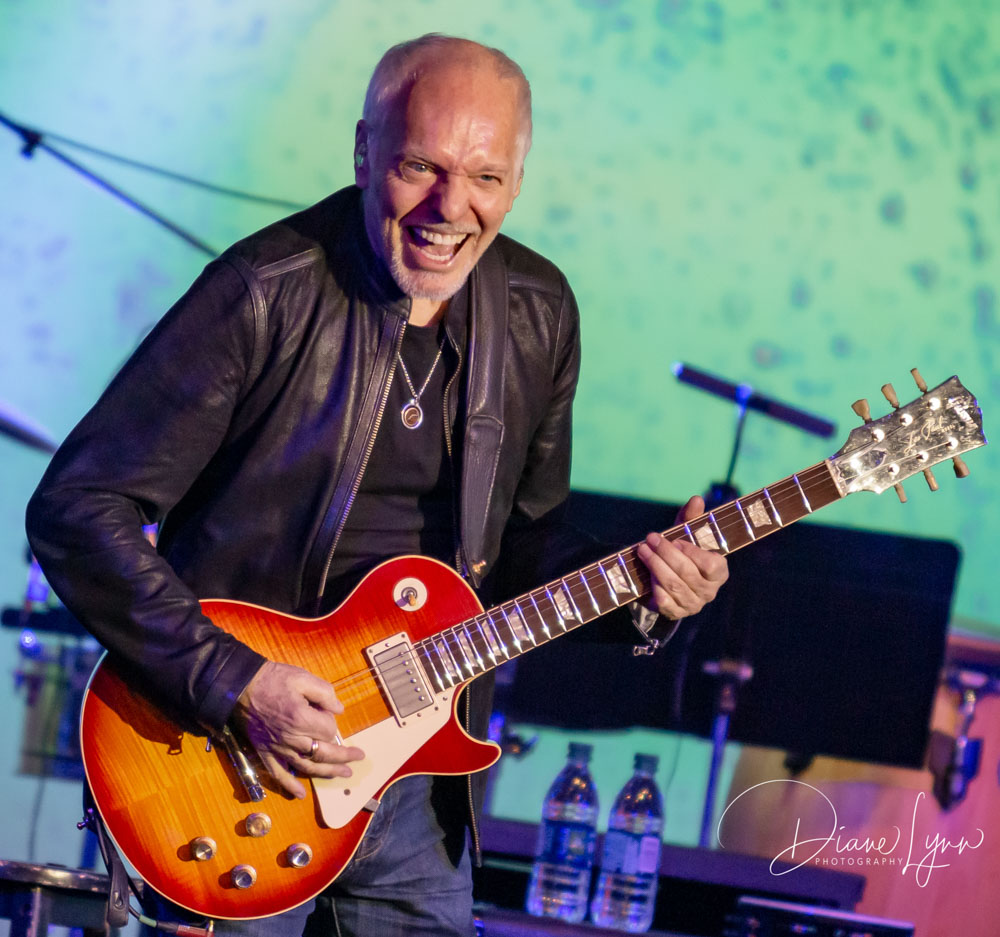 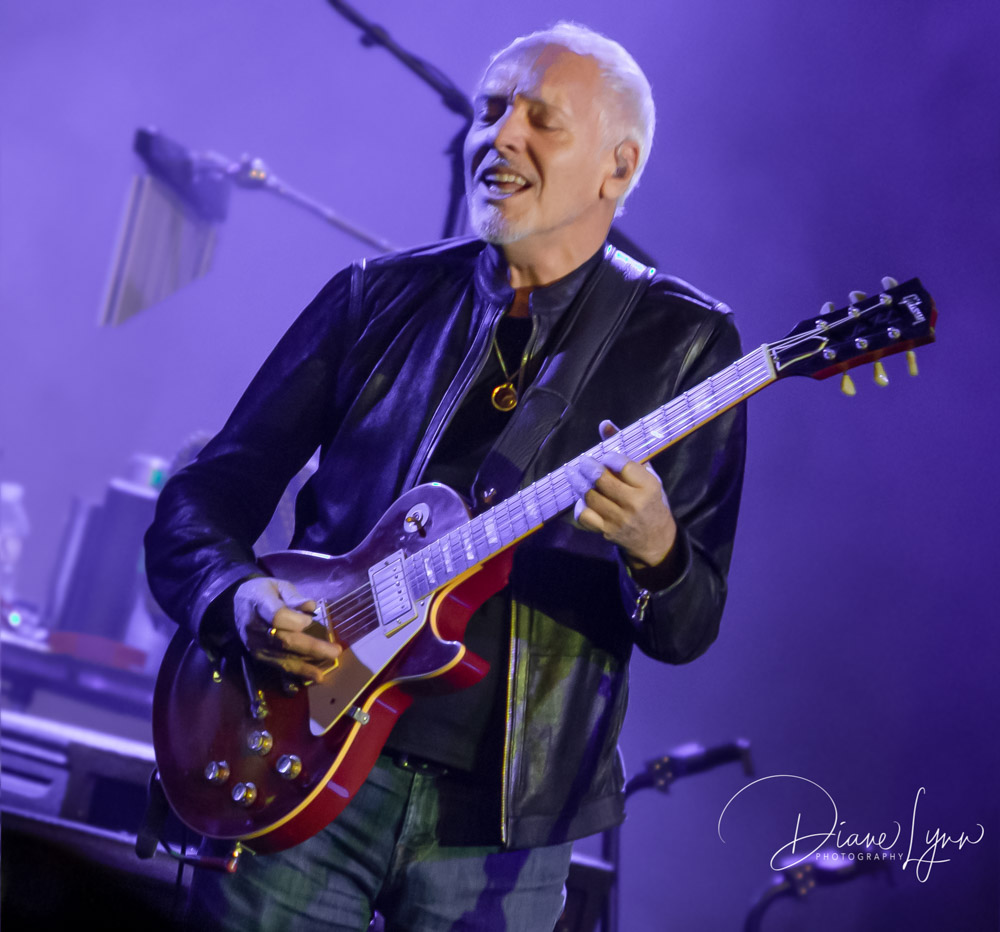 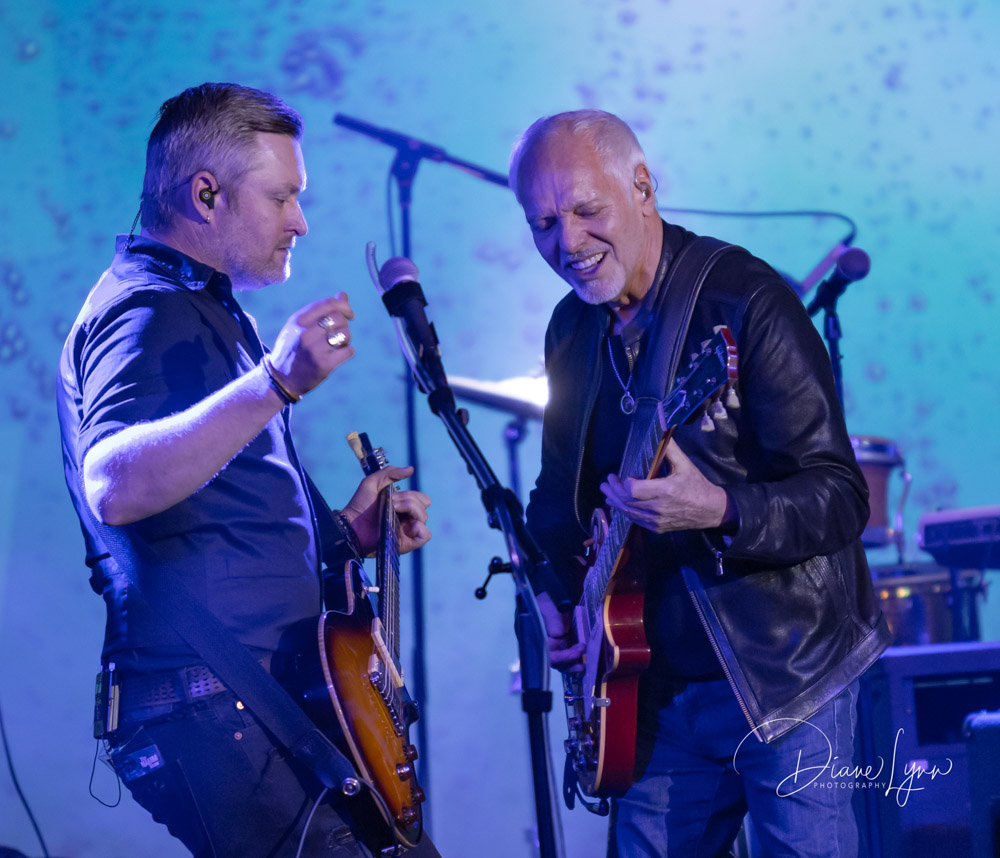 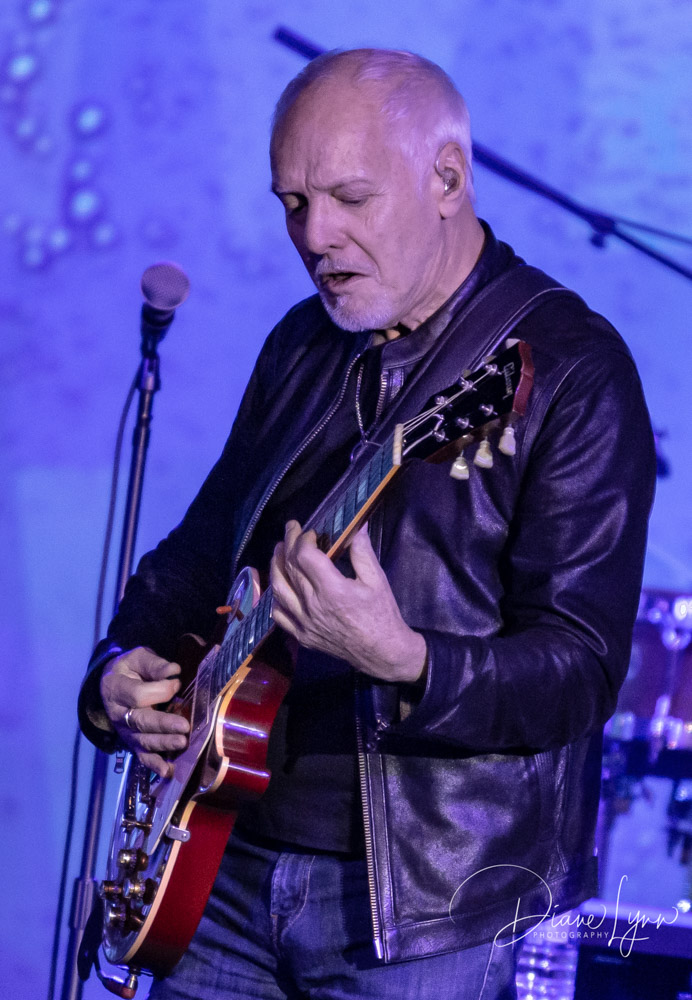 The award has been presented annually to remarkably-distinguished and accomplished individuals from the music industry, such as Jackson Browne, Joe Perry, Todd Rundgren, Pete Townshend, Lindsey Buckingham and beyond. Read more about The Les Paul Foundation by visiting https://www.lespaulfoundation.org/. 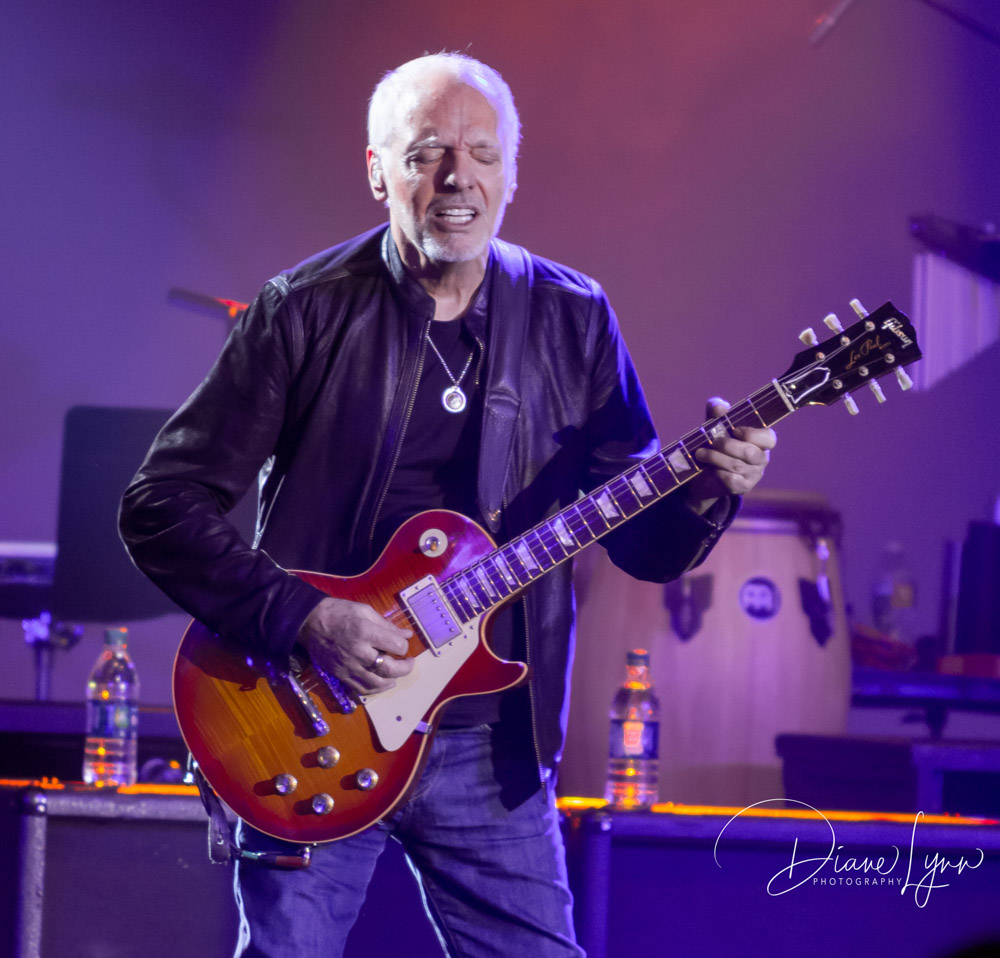 Skywalker Sound’s accomplished engineer, producer and director of music and scoring, Leslie Ann Jones, was inducted into the NAMM TEC Hall of Fame and earlier in the evening, presented a TEC Award for the 60th Annual Grammy Awards. Jones was introduced by jazz great Herbie Hancock, and is now among the coveted few inductees fit for the honor, which recognizes pioneers of audio technology, as well as the music industry’s most accomplished producers and audio technicians. Rose Mann Cherney, Skunk Baxter, Hal Blaine, Jack Douglas, Nathan East, Geoff Emerick and others have also been honored in recent years. 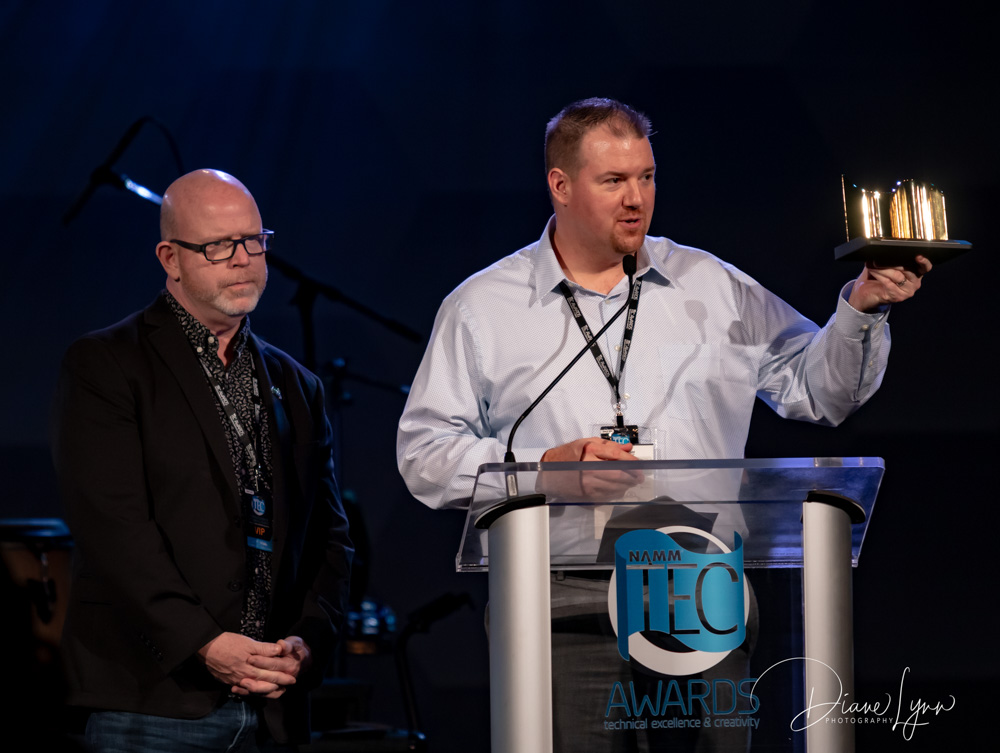 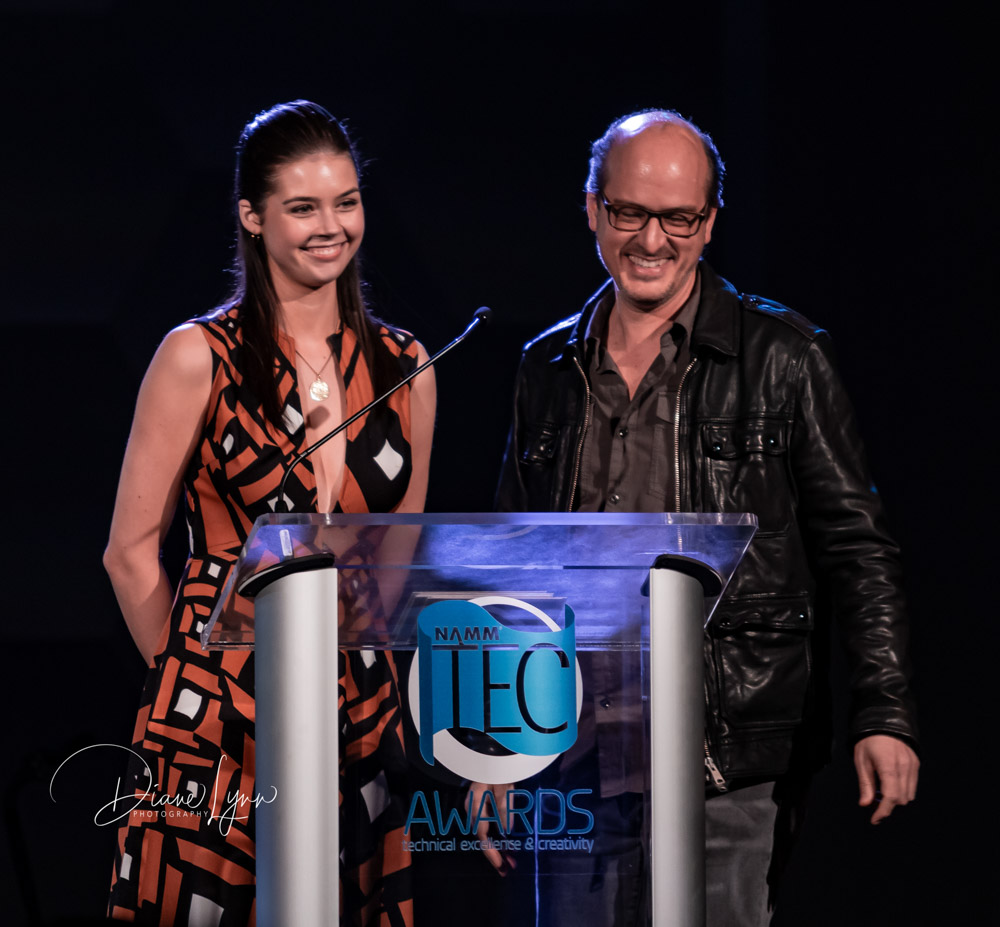 The NAMM TEC Awards were held during The NAMM Show, the global crossroads of the music products, pro audio and sound, and event technology industries. In total, winners in the 31 categories were selected from hundreds of product and project nominees. The final winners were chosen by a group of experts from all facets of the pro audio and sound production industries. 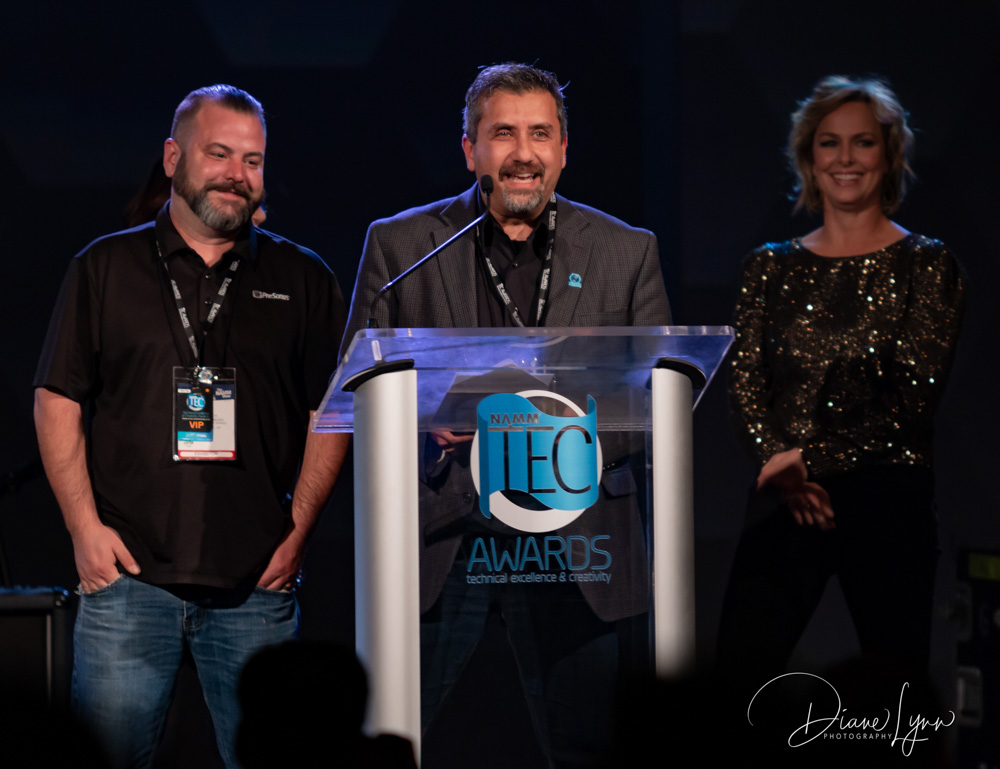 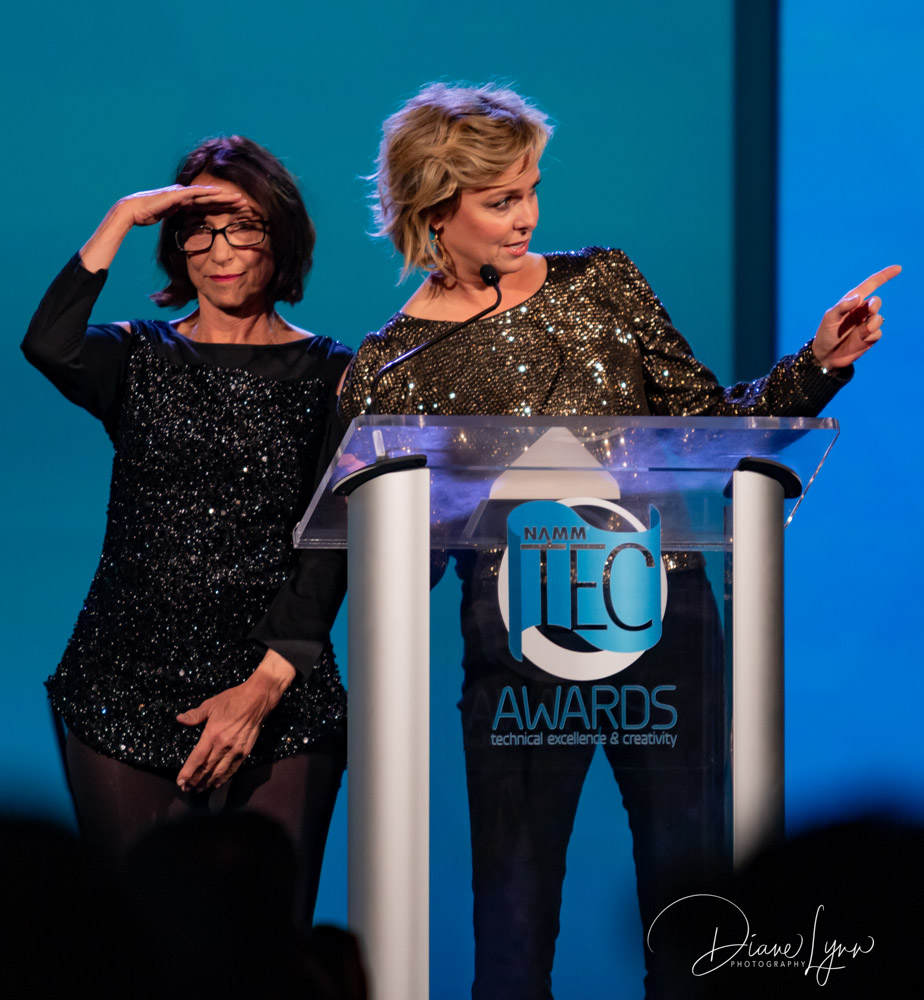 Title sponsors for the show included The Les Paul Foundation, D’Angelico New York, as well as many additional friends and long-time industry advocates.. Many of the evening’s winning products and technologies are available at music and pro audio retailers worldwide both online and in stores.

About The NAMM Foundation
The NAMM Foundation is a nonprofit organization with the mission of advancing active participation in music making across the lifespan by supporting scientific research, philanthropic giving and public service programs from the international music products industry.

About NAMM
The National Association of Music Merchants (NAMM) is the not-for-profit association with a mission to strengthen the $17 billion music products industry. NAMM is comprised of approximately 10,300 members located in 104 countries and regions. NAMM events and members fund The NAMM Foundation‘s efforts to promote the pleasures and benefits of music, and advance active participation in music making across the lifespan. For more information about NAMM, please visit www.namm.org, call 800.767.NAMM (6266) or follow the organization on Facebook, Instagram and Twitter.

About the NAMM TEC Awards
Presented annually by the NAMM Foundation during The NAMM Show, The NAMM TEC Awards recognizes the individuals, companies and technical innovations behind the sound of recordings, live performances, films, television, video games and other media in 23 Technical and 8 Creative Achievement Categories. The Les Paul Innovation Award is given at the event in tribute to musical artists and others whose work has exemplified the creative application of audio technology. Through its Hall of Fame, The TEC Awards also honors the pioneers of audio technology and the music industry’s most accomplished producers and audio technicians. The NAMM Foundation’s TECnology Hall of Fame celebrates innovations and groundbreaking technical achievements of the past. For more information, visit www.tecawards.org