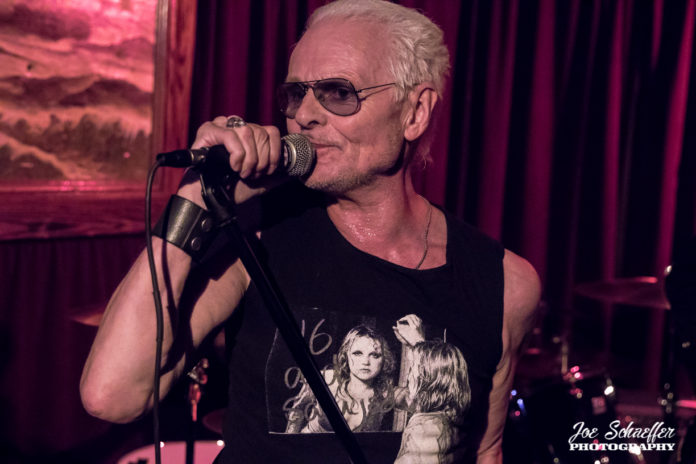 When one thinks about an eclectic artist, the name Michael Des Barres definitely comes to mind. His career has spanned more than fifty years in music, acting and more recently as a radio host. On this evening, Mr. Des Barres was doing what I love seeing him do best. Playing some kick ass Rock N’ Roll.

The Redwood Bar was packed with eager fans as Des Barres and his band The Mistakes opened their show with the blistering single “You Gotta Serve Somebody” followed up with the flipside “Living in the USA.” These two songs are amongst Des Barres current efforts. These tracks are highly energetic and I love the message of hope in both songs. The first thing I noticed was just how strong and fresh Des Barres‘ voice is. The man has definitely taken great care of himself. He prances around the stage with such energy and enthusiasm, that he was soaked with sweat ten minutes into the set. He’s one amazing performer.

The set featured songs spanning Des Barres’ recording career like the Silverhead classic “Hello New York” and “Detective Man” by my personal favorite band Detective. The band also performed a couple of Motown classics like a rocked up rendition of the Marvin Gaye classic “What’s Goin’ On” and a soft yet dramatic version of “Stop! In the Name of Love” by the Supremes. My personal favorite was a cover of the T. Rex classic “Bang a Gong.” Des Barres told a sweet little anecdote about the late Marc Bolan which was extremely special for this lifelong T. Rex fan.

Closing out their short set with a medley of Otis Redding and Little Richard songs the band and the crowd were completely fired up in the venue. The encores consisted of “Sixteen and Savaged” from the sophomore album by Silverhead and the “Raw Power” by Iggy and The Stooges. I definitely would have loved to have seen more from Des Barres and the band.

Now I may sound biased, but I must point out that Michael Des Barres has been one of my all-time favorite vocalist since a classmate gave me a copy of the first Silverhead album back in the 1970’s. I was an immediate fan of the band and especially Des Barres. I’ve seen in him perform with many different musical incarnations over the past forty years, like Detective, The Power Station and my personal favorite was his Soul Music Revue. I have never seen a bad performance from the man. He always gives 110% to any performance and leaves the audience overwhelmed. I’d encourage any true fan of Rock N’ Roll to get out and see a performance by Michael Des Barres and The Mistakes.