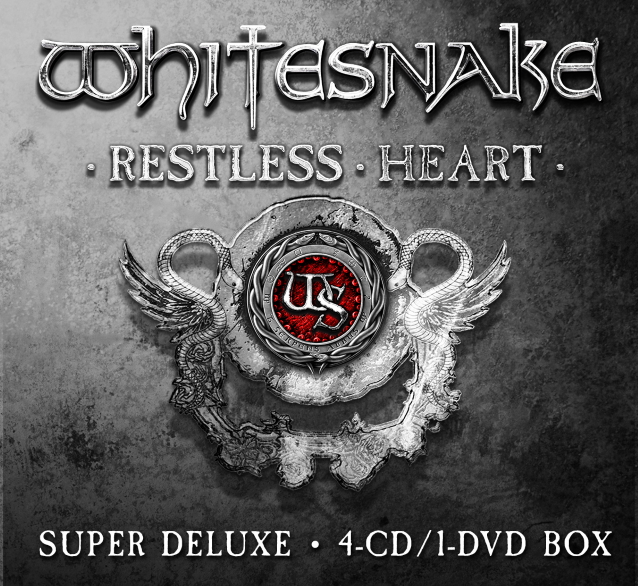 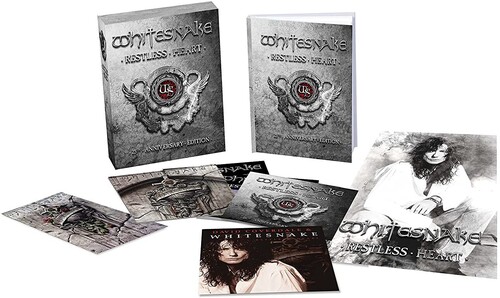 Coming out in the 90s the Restless Heart album never got its fair shake. It was never released in the US due to label problems and a record company that forced David Coverdale to release it as a Whitesnake album when it was intended to be a solo album meaning he had to try and change his approach mid project. The music climate was not favorable to classic rock and when they were recording they had to hire a Native American medicine man when they suspected the recording studio was sited on an old Indian burial ground. He truly must have felt cursed. Decades later it is unsurprising that he wants to revisit it from a position of strength.

It is an enormous package! Four CDs, a DVD, a book with interviews, a mini tour program modeled on the one from the original Restless Heart tour and a poster all in a beautiful silver box, not to even mention the vinyl version. With about 60 tracks it’ll take you a while to even get through it. For purists there is the original album remastered, but with the same underlying versions and in the same order as originally released. Then for those that felt that the original album was somewhat restrained compared to Whitesnake albums generally there is a 2021 turbo charged version remixed, and rocked up with additional contributions from Joel Hoekstra and Derek Sherinian intended to truly sit within the Whitesnake stable. It also contains extra tracks that were not on the original UK version (from the Japanese release).

Then the additional CDs ‘Dancing on The Titanic’ (a joke referring to how the original album was hatched in challenging circumstances) and Evolutions contain demo studio versions and versions showing how the tracks developed. These CDs provide a glimpse into how the band worked and often have the feel of live recordings and contain some stunning performances, a must hear for a true Whitesnake fan!

The DVD contains the new music videos, videos put together by Purplesnake (a member of the Whitesnake Creative Team) from archive material, upscaled old videos that were recorded at the time of the original record but which have now been polished up for re-release, a lyric video, three videos from the tremendous acoustic ‘Starkers’ performances with Adrian Vandenberg and a video interview with DC about the making of the record (where a couple of F bombs gets the package a 15 rating in the UK).

The book provides a lot of additional info. and stories eg about the Coverdale/Page project and which tracks on Restless Heart were intended for a sophomore album that never happened and what comedy shows DC and Adrian used to watch together when working on the original Restless Heart album for a truly intimate feel.

There is no doubt that there is a wealth of material here. When I was originally trying to get on top of the release for an interview with DC I had to do a table of the different tracks so I could formulate a road map of it in my mind. Undoubtedly this is for the Whitesnake aficionado par excellence. By this stage of the game you know if you are a Whitesnake fan or not.

One thing is for sure DC puts his heart and soul into everything he does. Simply to plan and execute this album selecting the demo tracks and approval of the remastering and remixing processes must have taken him and his producers a lot of time and energy.

However, be assured that if you enjoy Whitesnake you will be delighted with what has been done with the Restless Heart album to enable it to fit more comfortably in the Whitesnake stable and for the more casual fan the newly remixed album is available separately if desired. Personally as a passionate Whitesnake fan I would not want to be without the wonderful performances on the extra material.

If you love DC you’ll be in snaky heaven.

MegaCruise: Ensenda and CORROSION OF CONFORMITY – 10/16/19