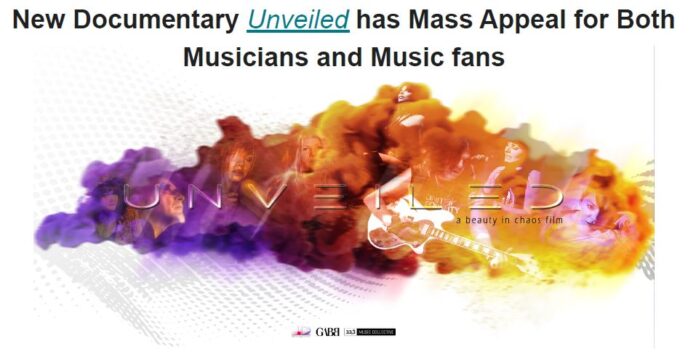 Beauty In Chaos is proud to announce the release of the new documentary titled “Unveiled“. The documentary, produced by Jammer Direct and GABB Design, was released on September 8, 2022 and is available for streaming now at https://jammer.direct/unveiled, with global streaming platforms in the near future.
Unveiled delves into the writing and recording process of the Beauty In Chaos album, Behind The Veil.

The documentary explores the decision to use an all female vocal lineup and the creative process involved with each of the artists. You also get first-hand accounts from Grammy nominated producer Michael Rozon and the artists involved in the remixes.
Unveiled features insight and commentary from singers/songwriters Elena Alice Fossi (Kirlian Camera), Whitney Tai, Tish Ciravolo, Pinky Turzo (Silver Ghost Shimmer), Betsy Martin (Caterwaul, Purr Machine), and Cinthya Hussey. Also, remixes by Bentley Jones, Julian Shah-Tayler, Tim Palmer, Tommy Hatz, Michael Rozon, as well as those around and
involved in the project.

Unveiled offers an intimate look at how Beauty In Chaos was able to create a cohesive and diverse album, while also staying true to their mission statement. The album, “Behind The Veil“, features songs that are relevant, musically, socially, and spiritually in today’s world.

About Beauty In Chaos
Beauty in Chaos is the brainchild of guitarist Michael Ciravolo. The LA-based, New Orleans native, is also President of Schecter Guitar Research. Until launching BIC, Ciravolo was guitarist for Human Drama for 30 years and had also played live and recorded with Michael Aston’s Gene Loves Jezebel since 1998.

About Jammer Direct
Jammer Direct is a multi-platform and online promotional and media company that includes video, radio, and journalist entities in the form of the brands Jammer Direct, JammerStream Radio, Jammerzine, and the TV streaming service collectively known as Jammer Direct ON DEMAND (JDOD).

The Evolution Of Revolution