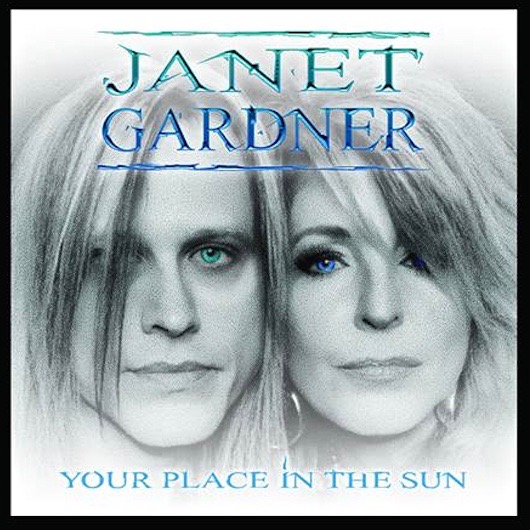 Janet Gardner – “Your Place In The Sun”

Janet Gardner’s second solo album with her husband Justin James,”Your Place In The Sun“, is a great follow up. Instantly accessible, I’ve had it on a loop on my recent travels. Similar to her first self-titled album in parts, it follows a heavier direction than the Vixen albums with Janet baring a few more teeth while staying full of commercial hooks.

Kicking off with ‘Your Place In the Sun’ the album launches straight into Randy Rhoads like meaty riffs, with whammy bar a’la Jake E Lee at his best, guaranteed to keep Janet’s 80’s fans happy. Second track ‘Assassinate’ has a touch of electro-pop about it with its insistent synth refrain providing something different which buries into your brain at a deep level after a few listens, but still includes Janet’s signature raspy rock vocal; it remains firmly in the right spot for WillToRock readers.

‘Standing’ is a big singalong song that is addictive after a few spins. It’s quite poppy, but in a great way and with Justin’s guitar solo and Janet’s vocals it’s in the same territory as some of the best of Cher’s pop rock and is not insipid in the slightest. ‘Try’ is more of an honest emotional ballad showing that Janet is not afraid to show her vulnerability in her work which will appeal to fans for its authenticity. It’s a little more Nashville with acoustic guitar, but it has little gospel touches too in the backing vocals. It’s just a great song with broader appeal than straight 80’s rock while it easily also could have been on MTV back in the day.

‘Web’ picks up the pace again and is a little harder in places, but there is also something a little early Madonna-ish about it until the guitar kicks in and changes all that. ‘Kicks Me Back’ reminds me a little of Saraya; rock with a Southern streak. ‘A Way To Your Heart’ has all the melodic deliciousness of a great Heart song back in the day. ‘Should Have Known’ is harder edged with a groove. ‘Unconditionally’ has a very subtle hook that grows on you.  ‘You Said’ is metal streaked through with a little electro-pop for a commercial edge. ‘Without You’ is so catchy after a few listens it really could have been chart material when a chart really existed. ‘Flame Thrower’ is a more traditional rock n roller with rollicking roots a’la AC/DC.

I enjoyed this album enough to listen to it again and again. Janet felt the need for a change and it’s great to see her spread her wings and fly literally to her place in the sun.