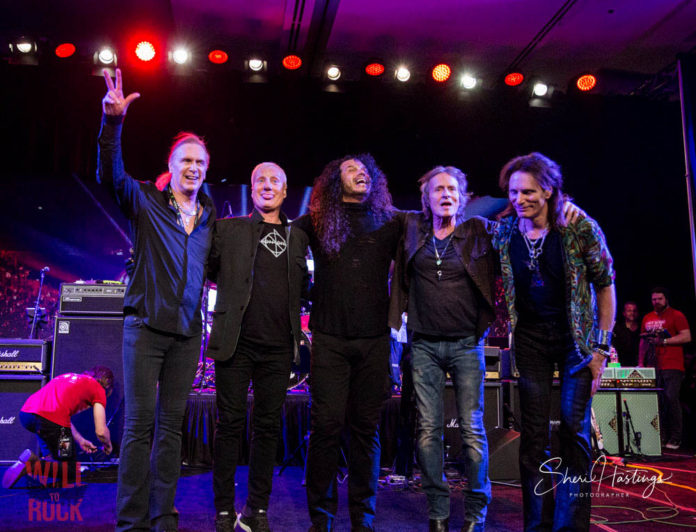 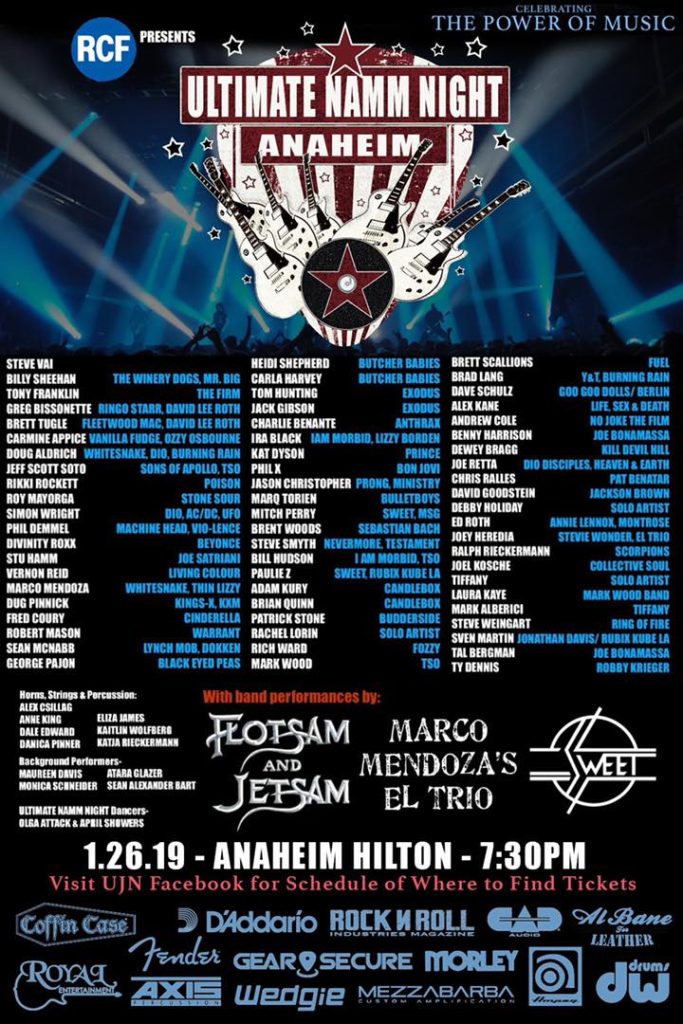 The 2nd annual Ultimate NAMM Night presented by RCF Audio was a huge success.  The packed to capacity Anaheim Hilton ballroom once again provided the 1500 attendees with many genres of music  from jazz to pop to funk to metal & thrash and classic rock, all performed by a diverse range of performers...91 to be exact! Some of tonight’s guests included Vernon Reid (Living Color), Doug Aldrich (Whitesnake), Marco Mendoza (Dead Daisies, Thin Lizzy), Doug Pinnick (Kings X), Tiffany (solo recording artist), the band Sweet and members from Zebra, Scorpions, Poison, the Butcher Babies and many others, including the Ultimate Jam Night house band, that included Paulie Z (vocals/MC duties), Mitch Perry(guitar), Sean McNabb (bass), Sven Martin (keys), & Chris Ralles(drums), and of course, the UJN Dancers, Olga & April were there as well.
After the opening by the UJN House Band, Marco Mendoza’s El Trio kicked off the evening with some Latin flair followed up by one amazing performance after the other! 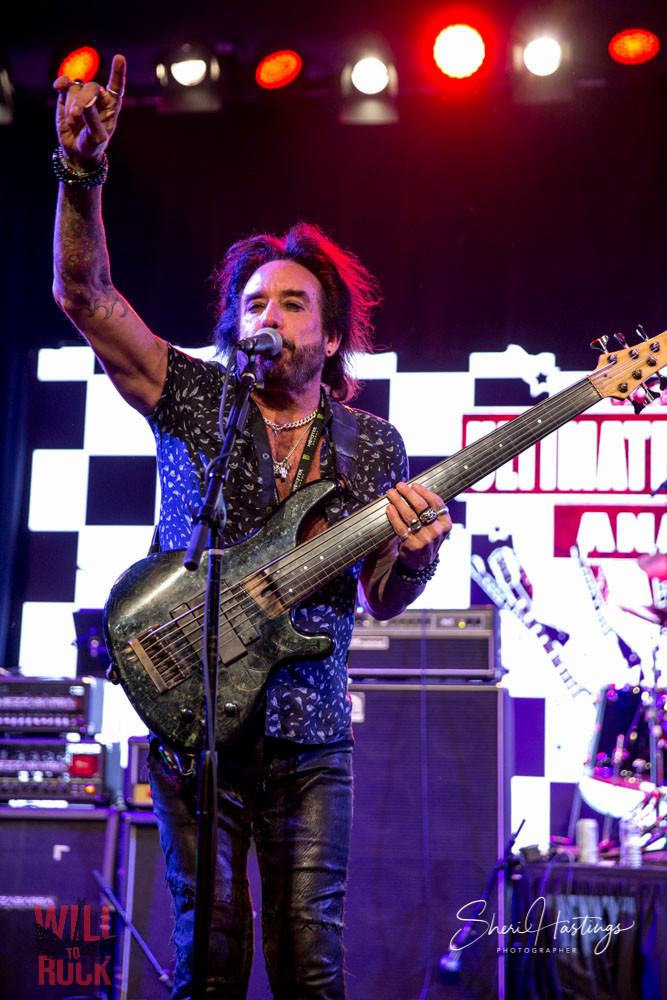 There were also a couple of band reunions that happened that night: The progressive metal band from Phoenix, Flotsam and Jetsam got back together and performed two songs, including one from their newest album, “The End Of Chaos“. Based on the reception they received from the crowd, it was a VERY welcome return to action. 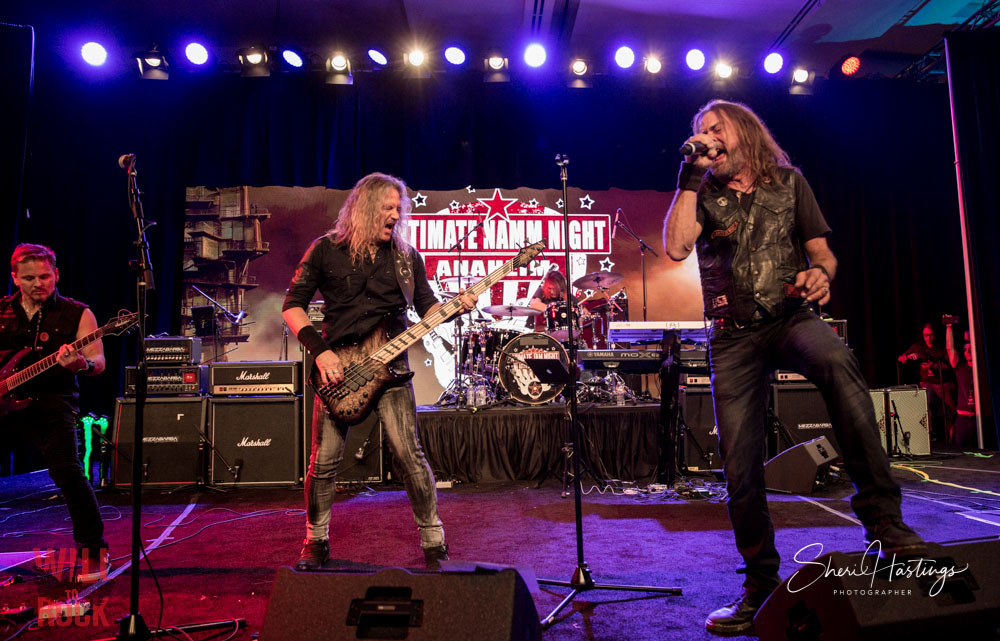 There was also the long-awaited reunion of the David Lee Roth “Eat ‘Em and Smile” band minus David Lee Roth. Instead the ever capable Jeff Scott Soto (Sons Of Apollo) took on the lead vocal duties for this evening. To see the dynamic duo of Steve Vai and Billy Sheehan along with Brett Tuggle and Gregg Bissonette perform together for a coupe of songs (“Tie Your Mother Down“ and “Shyboy“) was a very special treat indeed. Especially for those of us who almost saw the reunion take place a few years back when Ultimate Jam night attempted to get the band back together but infamously was shut down by the fire marshal just as Dave and the Boys were about to take the stage. Even without Dave, the sight of the band together, ripping through “Shy Boy” was indeed satisfying. Jeff Scott Soto has a voice that is undeniably strong and pitch perfect and he did a stellar job taking on Dave’s and Freddie’s vocals. 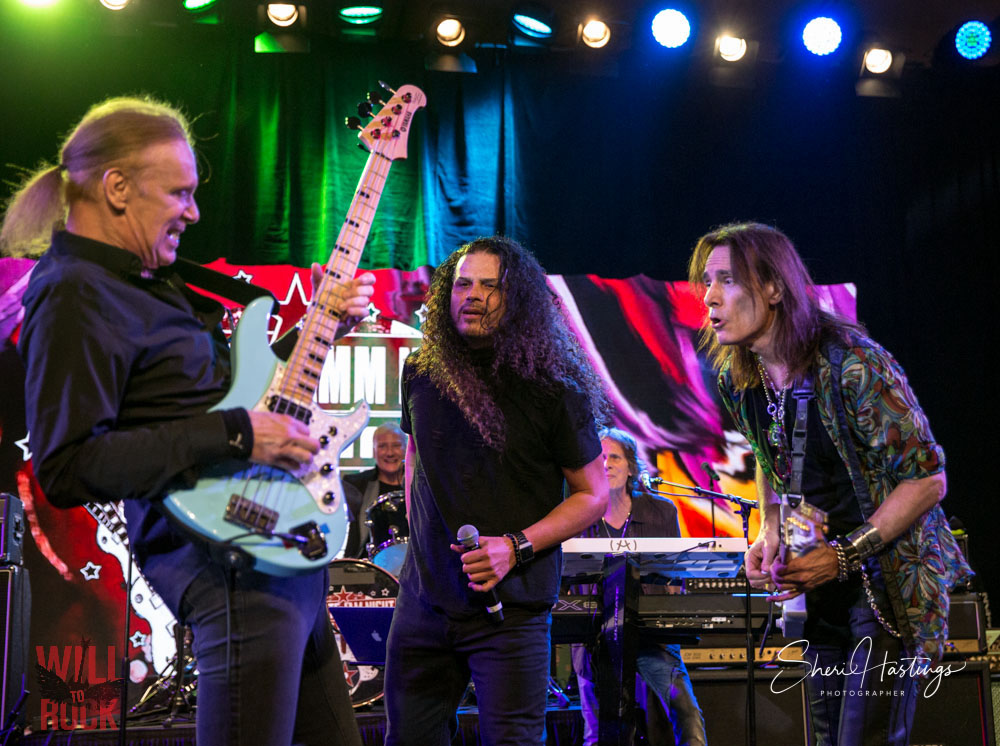 (The Eat ‘Em And Smile Band) 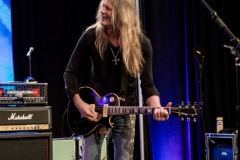 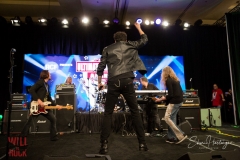