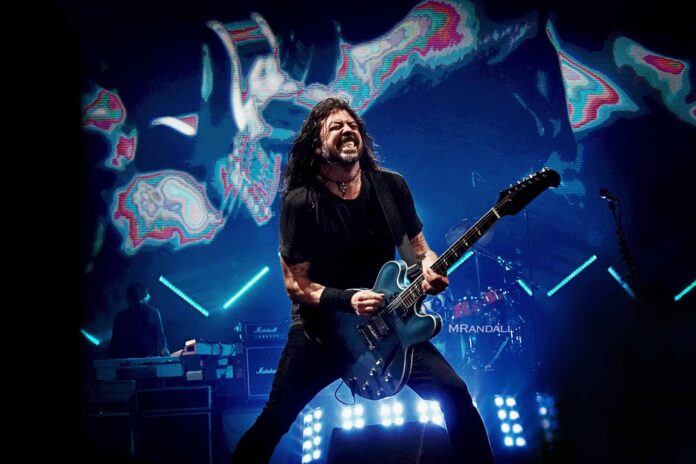 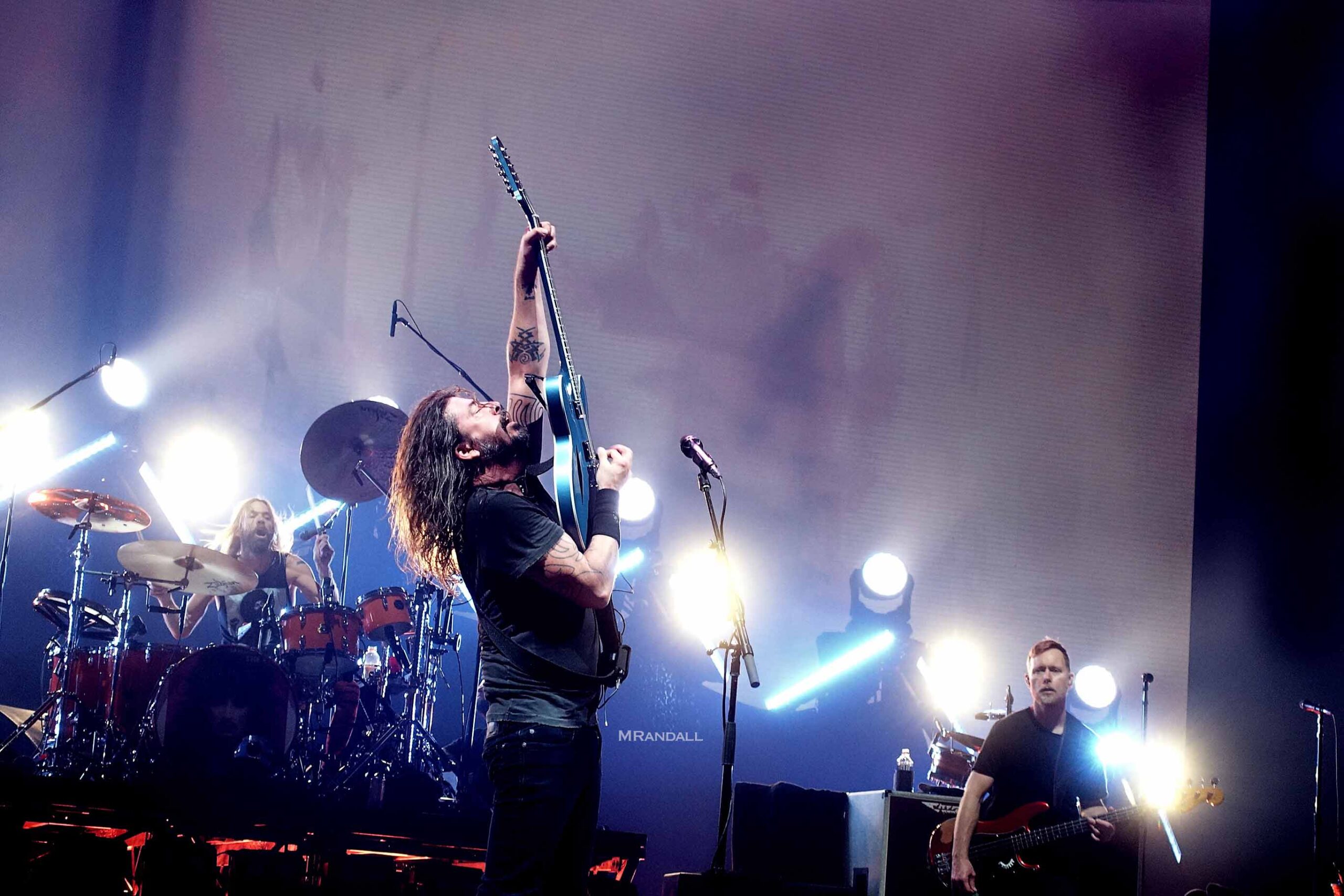 Newly inducted Rock and Roll Hall of Famers the Foo Fighters made a stop in Sin City for a 2-night stand on Thursday, Dec. 2nd and Saturday, Dec 4th. Their 25th anniversary tour had to be re-dubbed the 26th anniversary tour, due to their tour and “Medicine at Midnight” album being postponed to 2021 due the pandemic.

It’s never a gamble when you go see the Foo Fighters, they always put on a great show, and they never phone it in. And it was great to see a band that can easily fill a football stadium play in a small venue like the renovated 5,200 seat Dolby Live theatre.

At around 9:05 the band walked out on stage. Dave Grohl in his black t-shirt, black jeans and trademark blue Gibson 335. They opened with “Times Like These” with just Dave on vocals accompanied only by keyboardist Rami Jaffee. Then halfway in, the song exploded with the full band joining in. Grohl made full use of the stage, running from one end to the other. He did this all night, his energy never waning throughout the nearly 3-hour show. “All right, here we go!!!!” 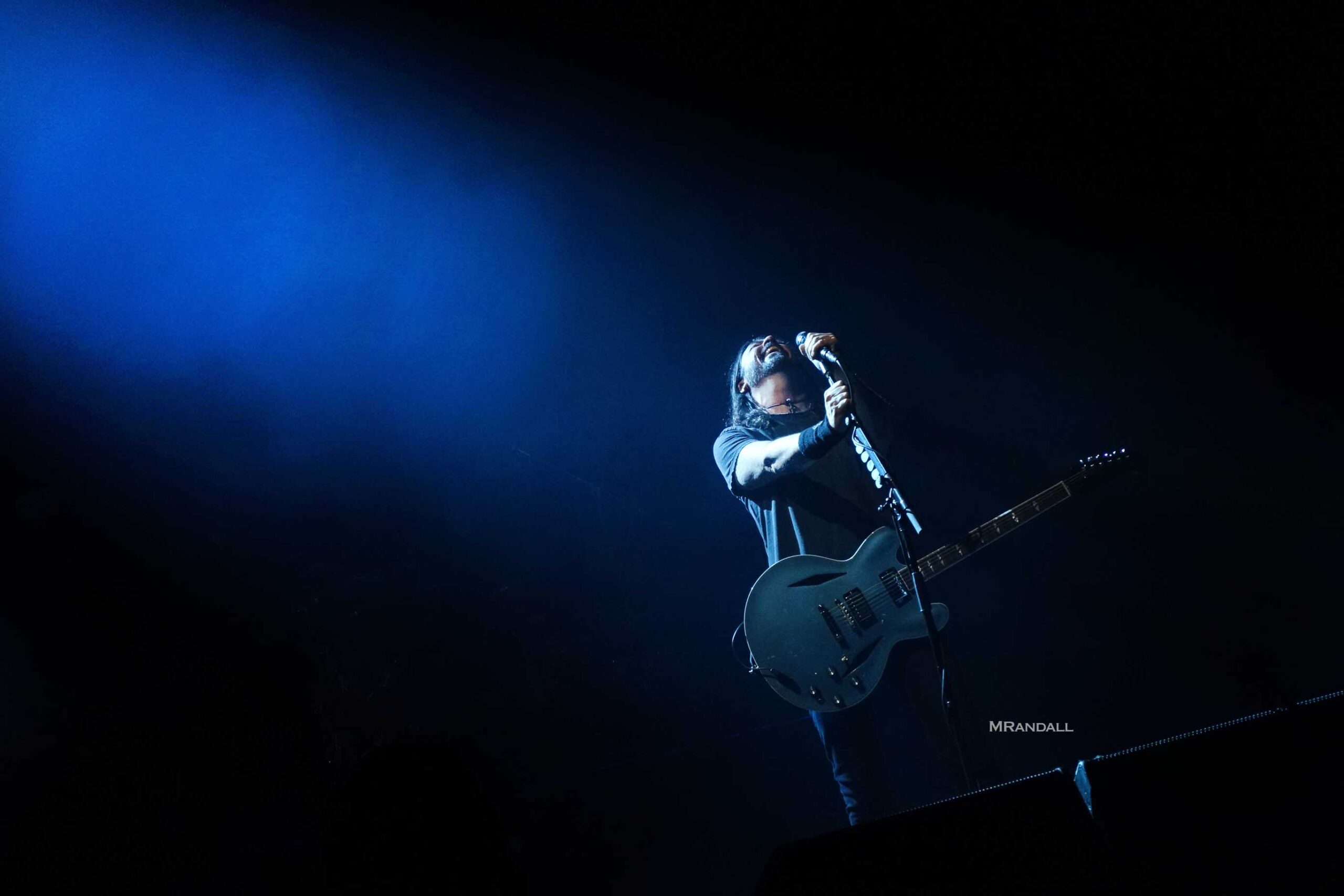 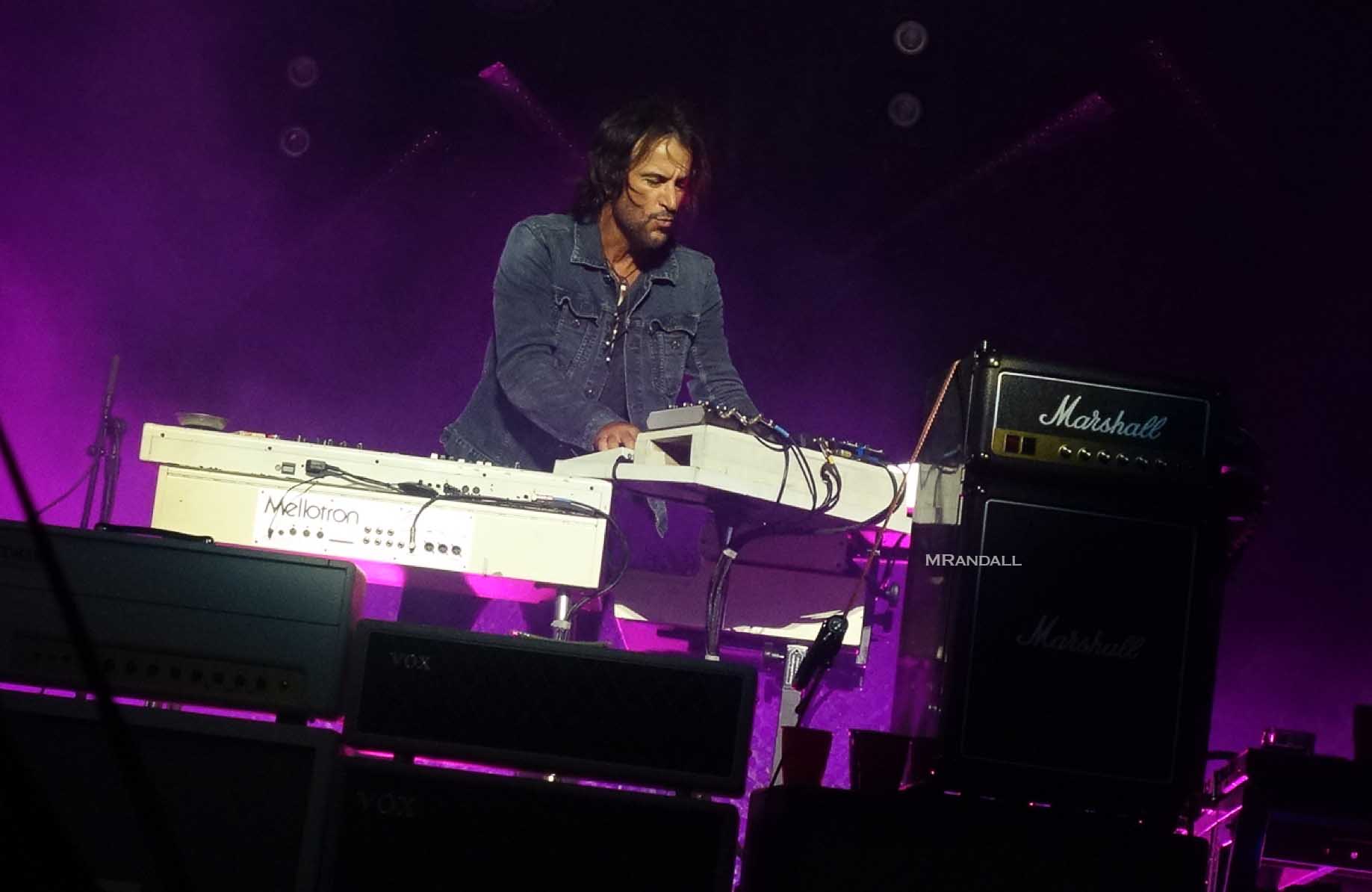 Dave Grohl warned the crowd, “We’re gonna sing all night, you know that right? Are you ready for a long fucking night?” When you go to a FF show, you’re in for a loooong night. Foo Fighter shows are marathons, not sprints and their fans know it. They come early, they come prepared to sing and scream, and they come armed with signs to hoist and hopefully get the band’s attention.

Every song was a mini-concert in and of itself, with fists pumping, sing-a-longs, scream-a-longs, and dramatic endings. By the second song, Dave was drenched in sweat. Lots of songs were peppered with riffs of other rock songs: “Cat Scratch Fever” referenced in “All My Life.” The band members are unabashed fans of all forms of rock, from punk to classic rock.

Throughout the evening Dave acknowledged the old school fans, but was also on a mission to win over new ones. “I assume some of you have seen the Foo Fighters before. But I also have to imagine some of you haven’t. You’re my target audience. I am here to turn your ass into a fucking Foo Fighters Fan! Our songs are so fucking simple, if you don’t know the song, look at the asshole next to you and do what he does.”

The band pulled songs from all eras, with songs from “The Colour and the Shape” to their newest album, “Medicine at Midnight“, including the Motorhead-ish “No Son of Mine.” The band was augmented by their three background singers Linda Mace, Barbara Gruska and Samantha Sidley. 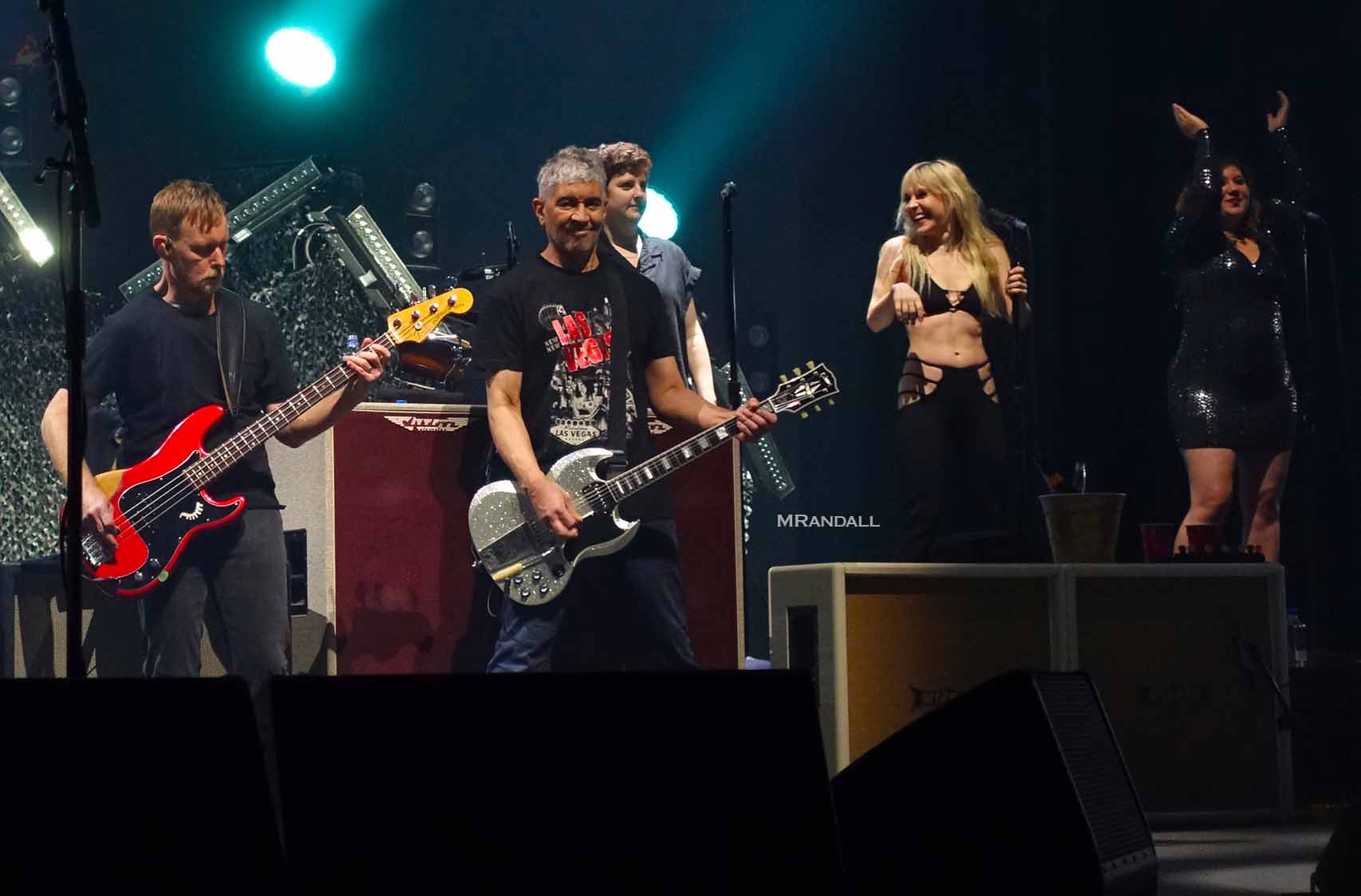 This being night two, Dave confided with the crowd, “I know it’s weird being the second night. But just so you know…we had fun the first night. But fuck that shit! This is night TWO! Can you say TWO? Can you say TWO? You just jinxed it. Now we’re fucked.” He later hinted at a Vegas residency in the future, “When we eventually come here to do our residency, it’ll be ‘Night 26 was fun, but Night 27 is fucking going off right now!” 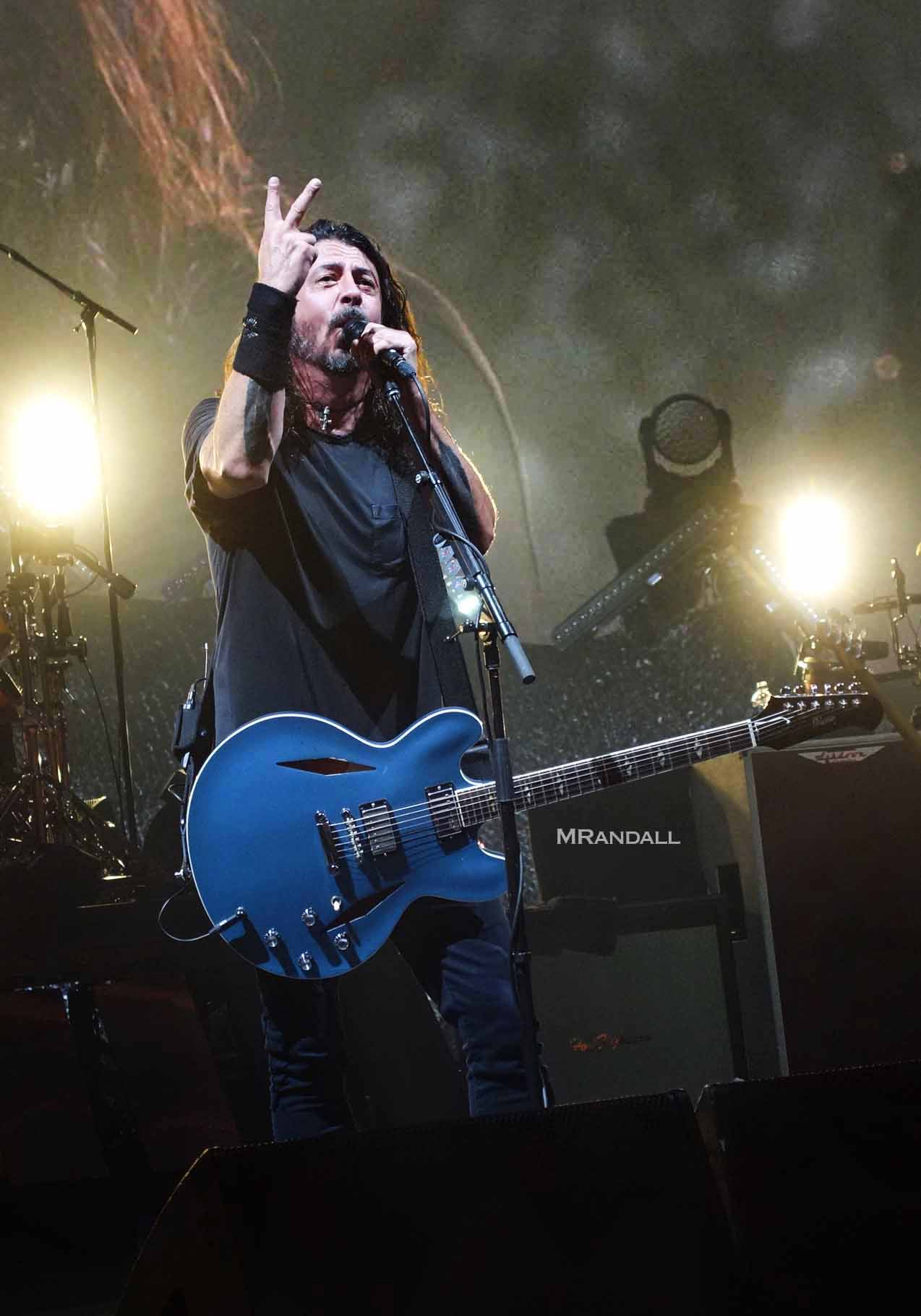 At this point, Dave spotted a fight in the audience, “Hold on sec, let me get in some of this Monster Energy Drink -aggressive male behavior. Hold on UFC” and tried to de-escalate things by breaking out into a dance. “Look at me! You paid good money to watch this shit. Namaste Mother-fucker.” After a few moments, Dave mouthed to the gentleman, “You gotta go.” “Medicine at Midnight” continued and morphed into Tom Petty and the Heartbreakers “Breakdown.” 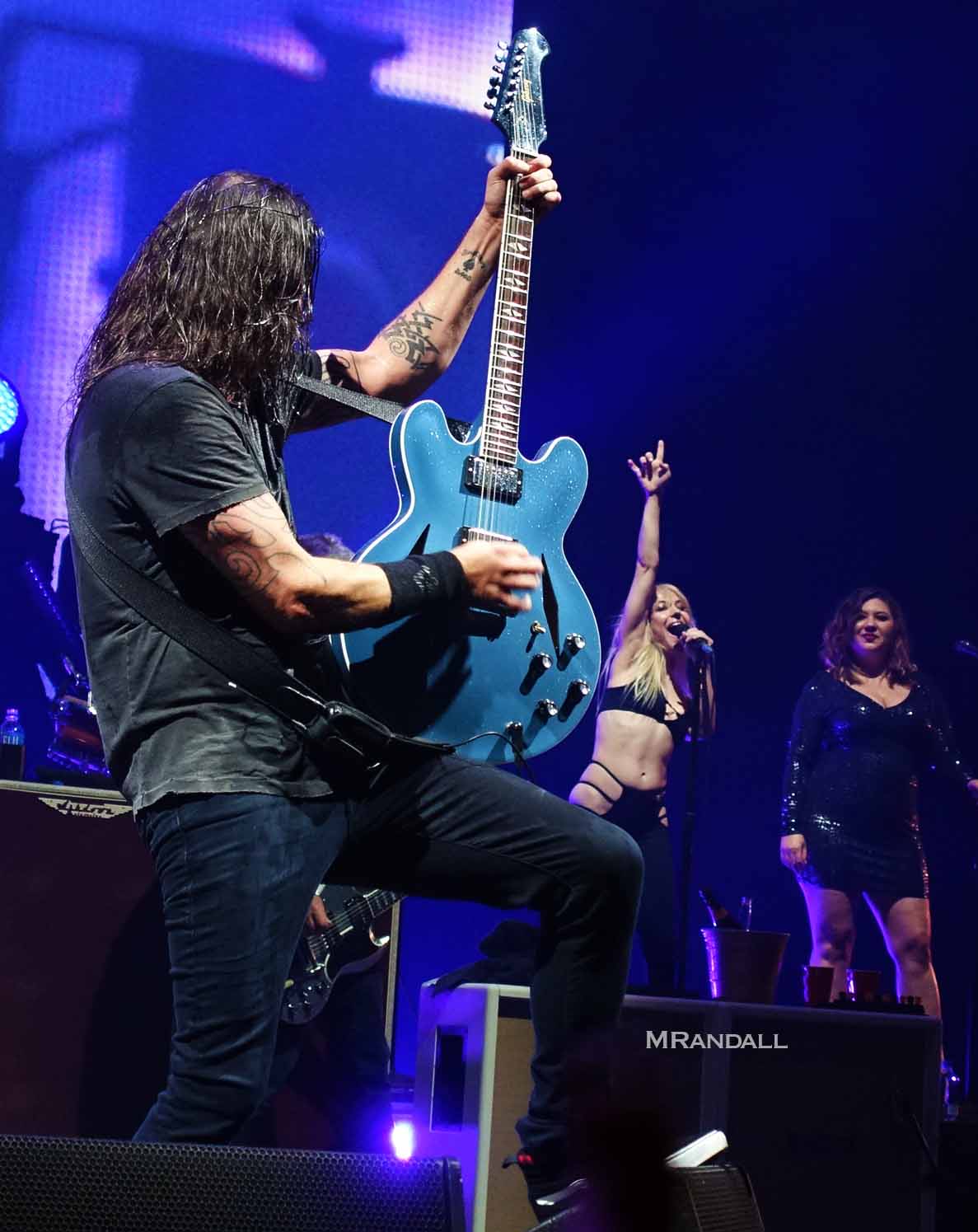 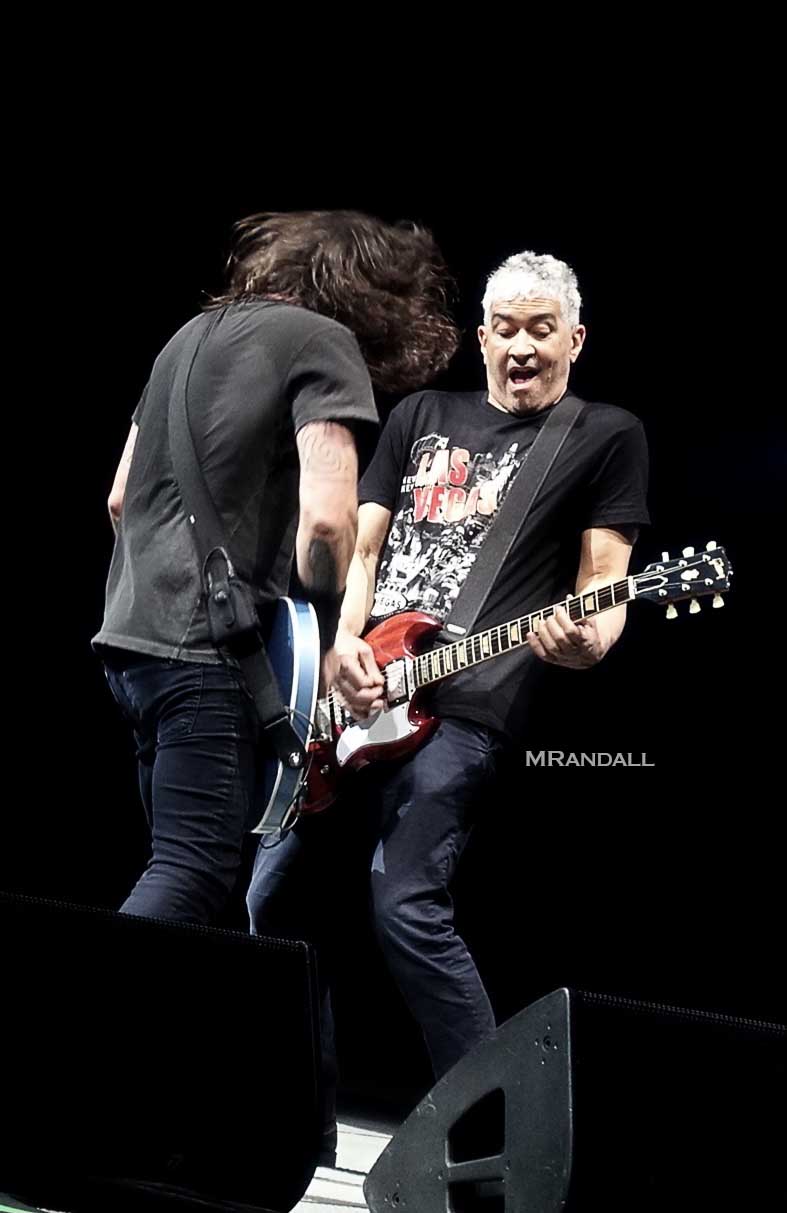 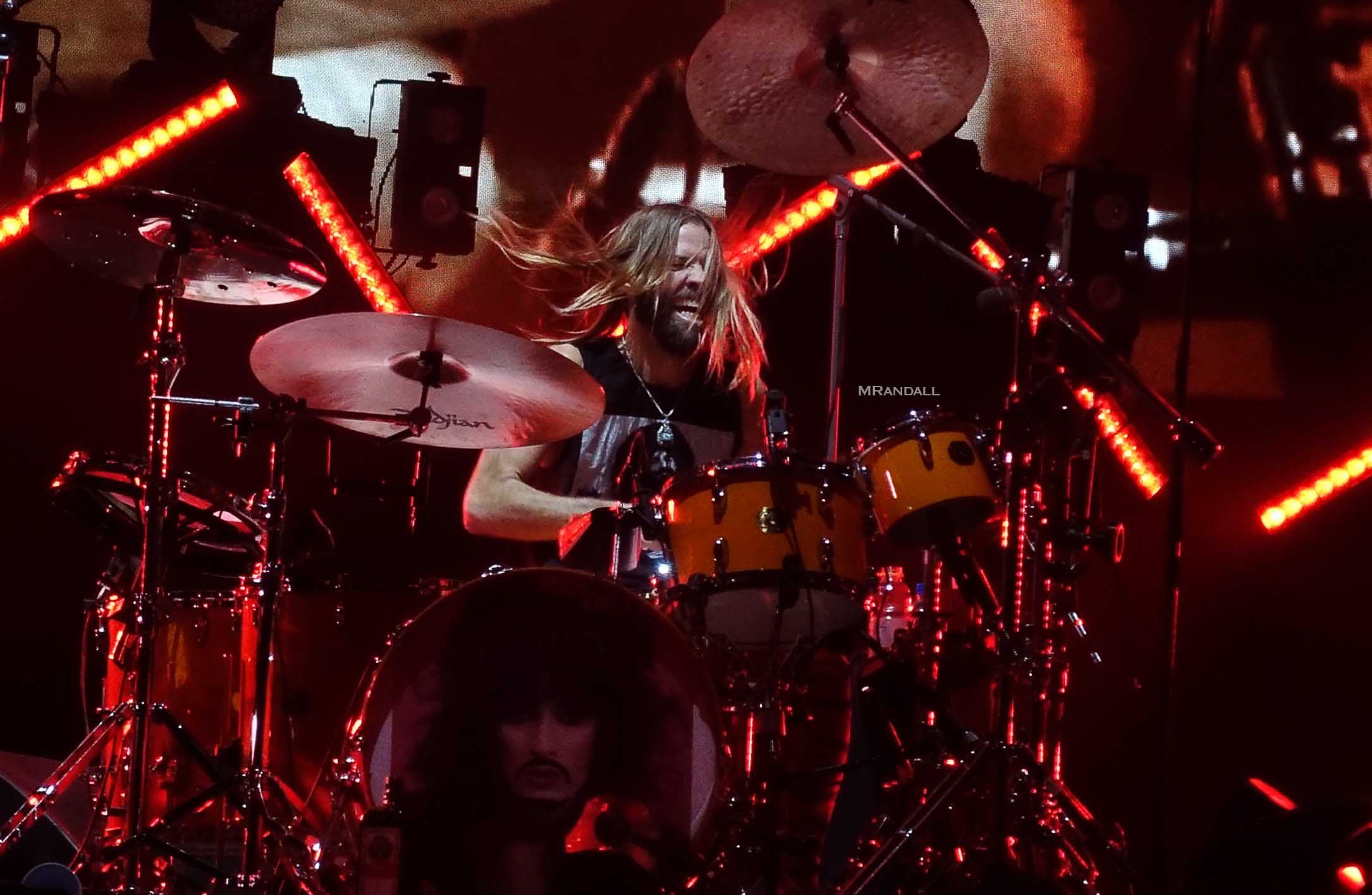 After the song “Walk” from 2011’s “Wasting Light” album, it was time for band introductions. Chris Shiflett tore into an Eddie Van Halen inspired solo prompting Dave to say “you won’t hear that in a Foo Fighter’s song, but he’s THAT good!” Shiflett then pointed out an audience member in Gene Simmons make-up and then announced that the real Gene Simmons was backstage. With that the band started “Dr. Love” as Gene Simmons strolled on stage wearing a baseball cap and facemask and handed Dave a $100 bill. I’d say there were more boos than applause for him, but Dave had nothing but love, “I feel like that’s what he looked like when he was dating Cher. Listen…Gene Simmons is a legendary bass player. I had posters of that motherfucker on my wall when I was a kid. Hold up! Let me rephrase that-I STILL have posters of Gene Simmons on my walls at home!” 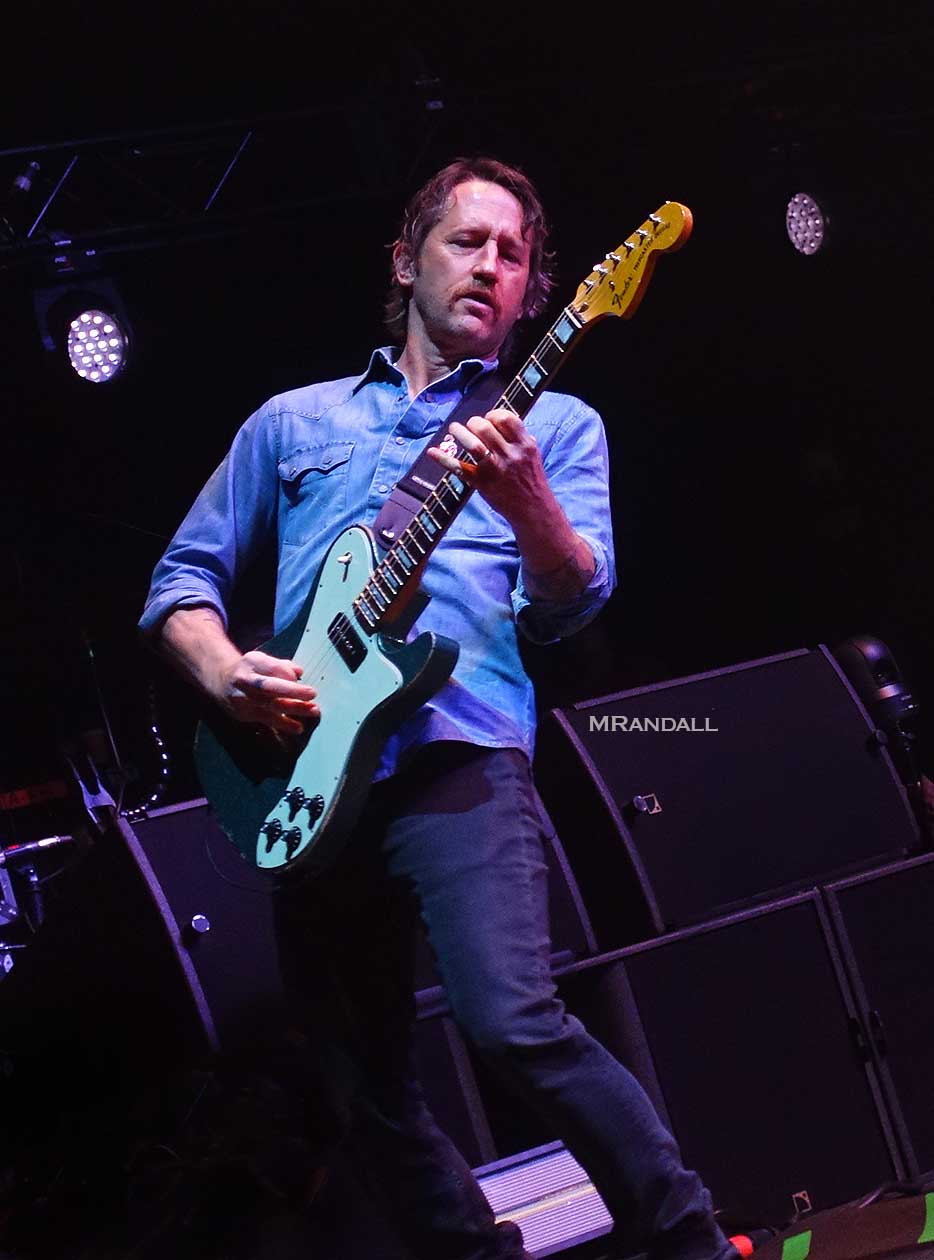 When it was “God of Thunder” bassist Nate Mendel’s turn, he rumbled through John Entwistle’s bass solo from The Who’s “My Generation.” When it was time to introduce Pat Smear, he was teased for thinking he’d be able to go home after the Thursday show, so he didn’t pack a change of clothes. Thus the Las Vegas gift store t-shirt he was sporting on this night. 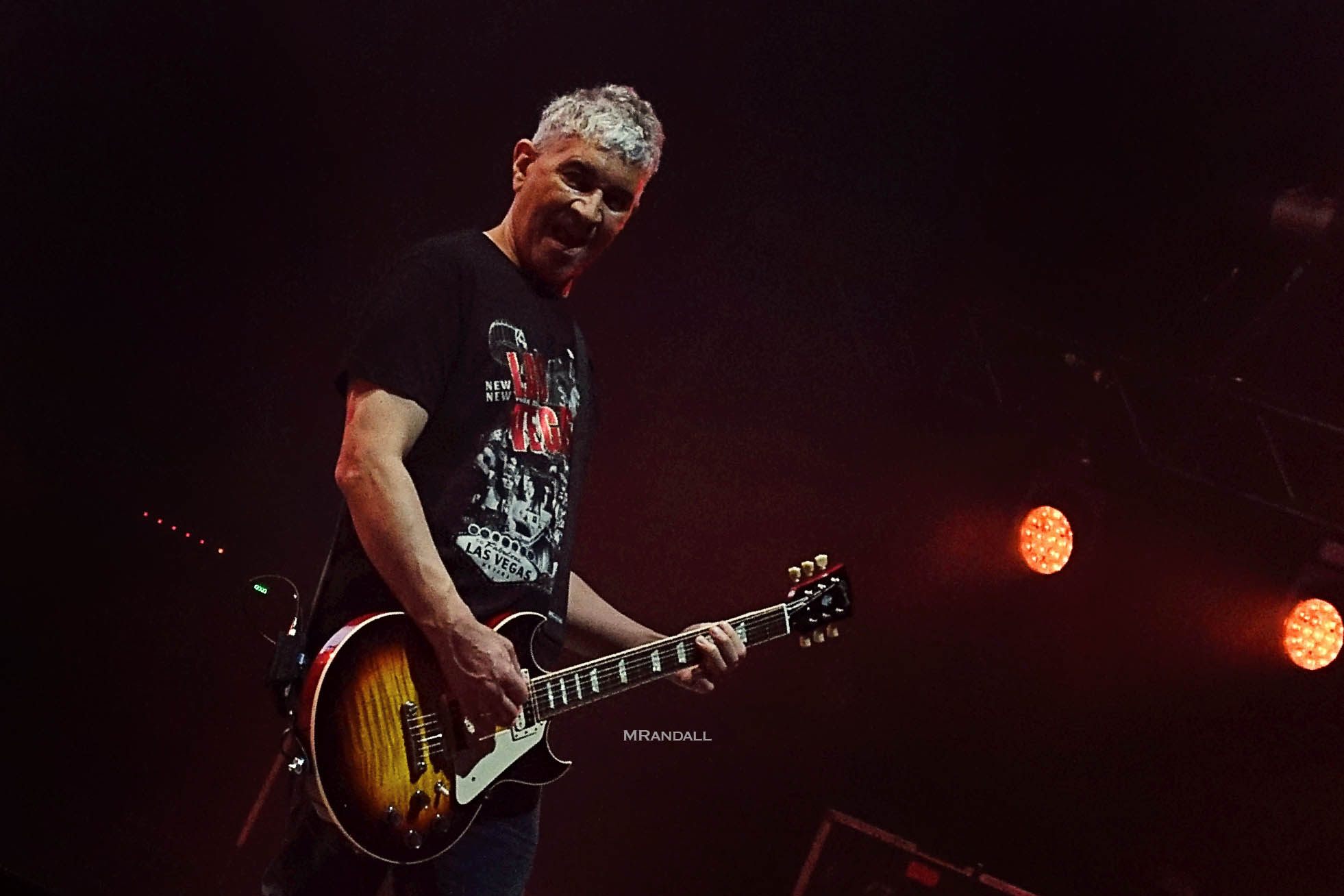 It was then drummer Taylor Hawkins’ turn. Wearing EVH board shorts and tiger-striped leggings, he stepped out from behind his kit and Dave took his spot. On this particular night the kit’s bass drum was adorned with the image of an ‘80s era Tommy Lee. Taylor led the crowd in a Freddie Mercury-style call and response and a cover of Queen’s “Somebody to Love.” 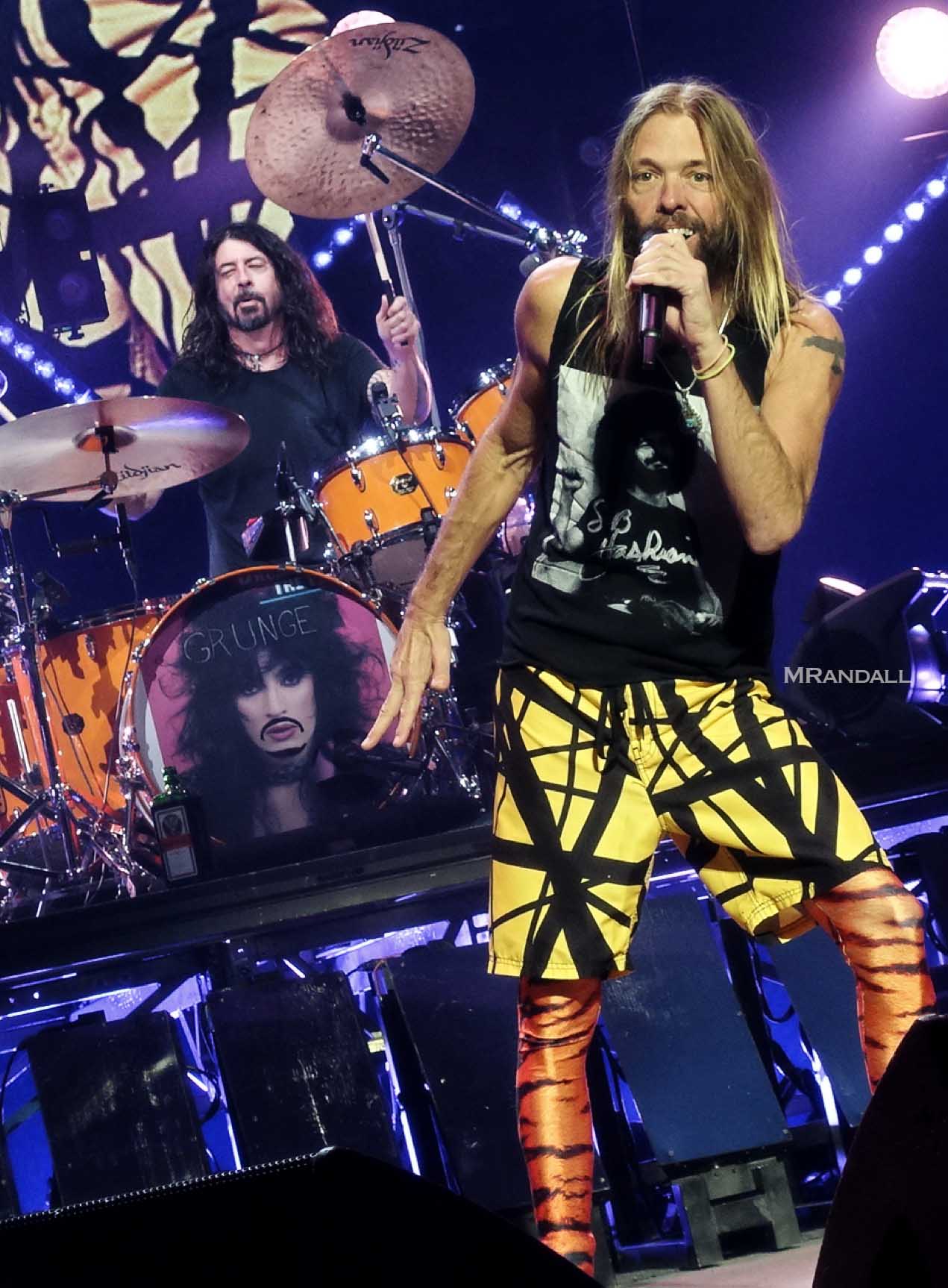 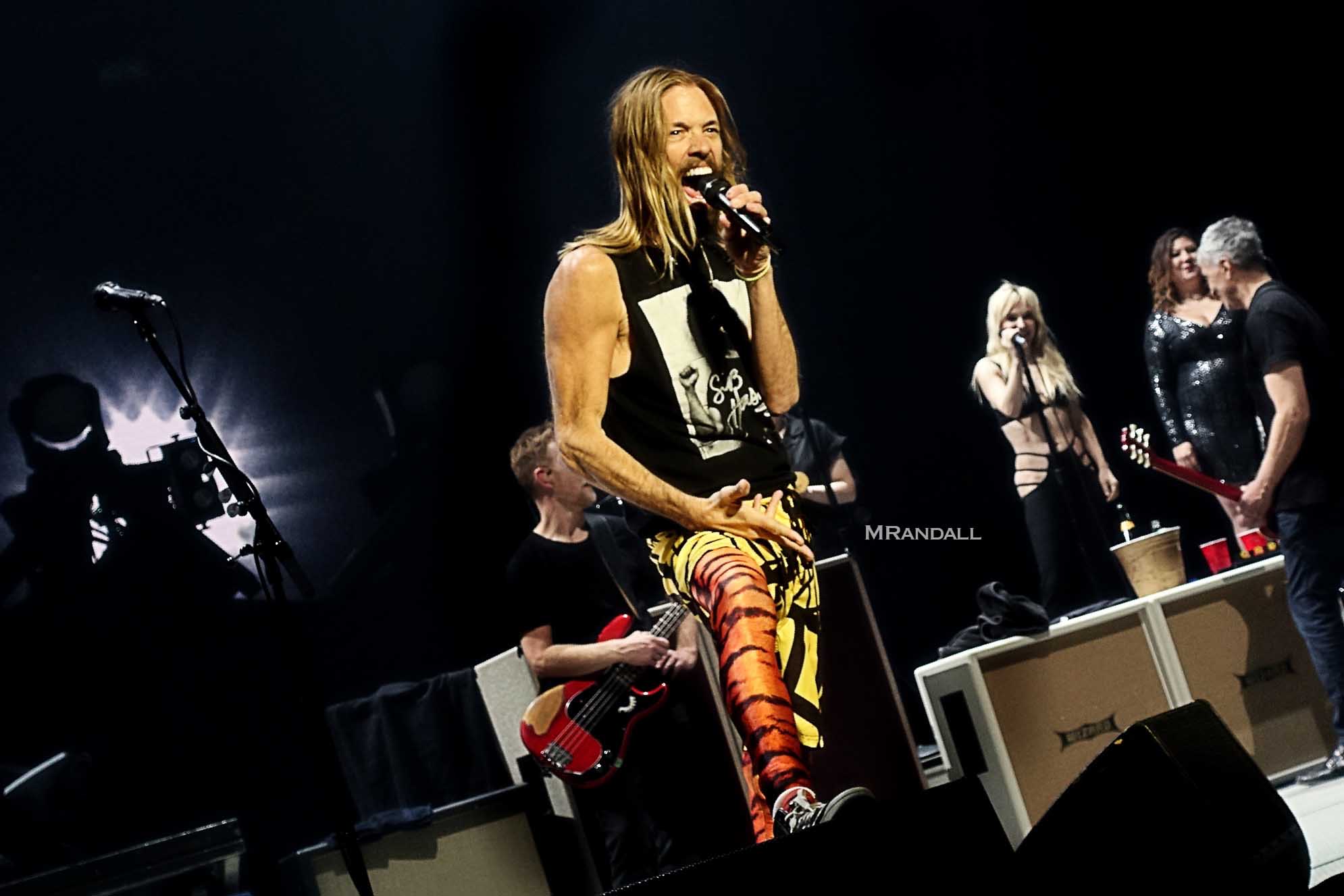 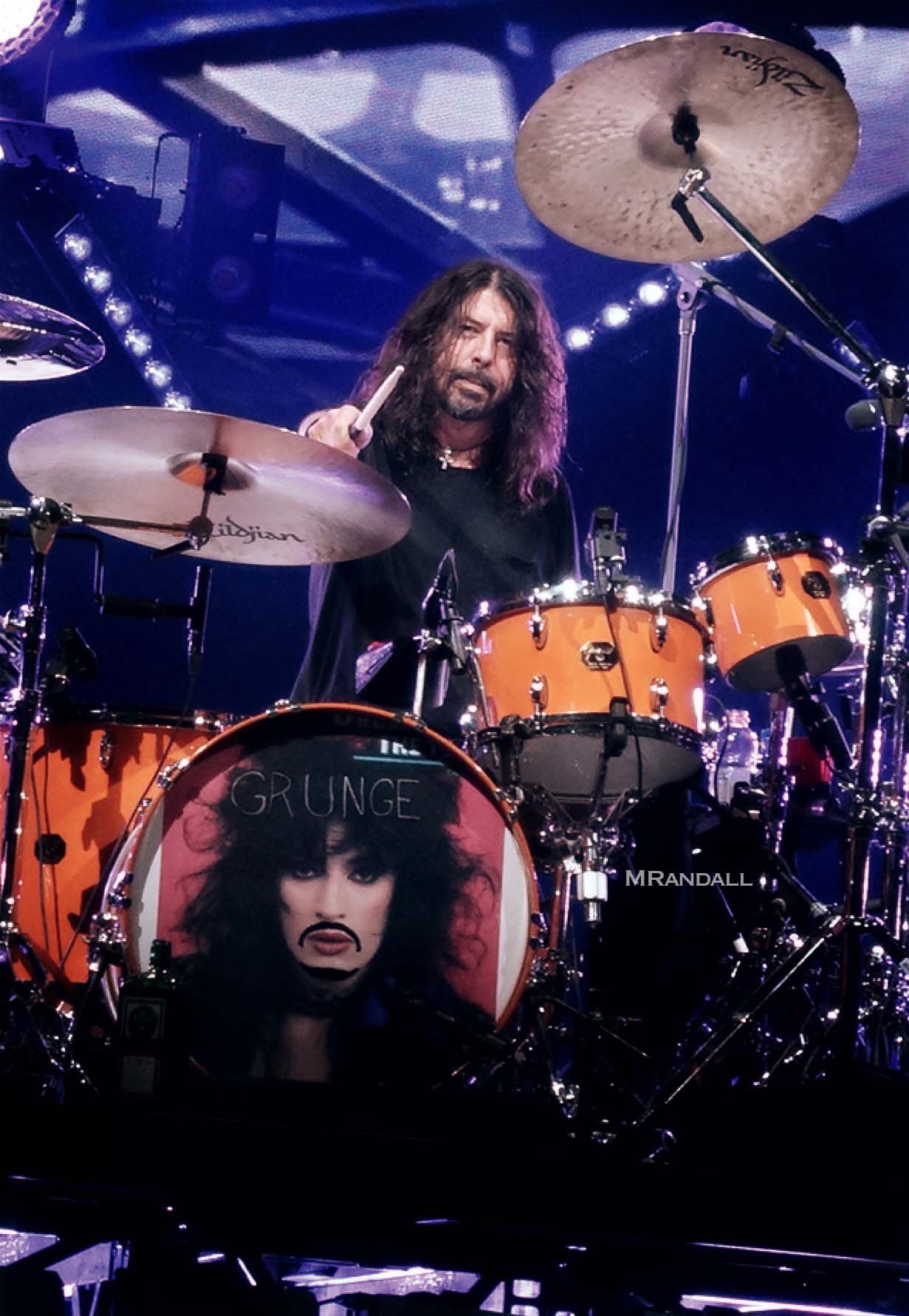 Dave then paused to look at some of the many signs fans had brought to the show. He remarked how the requests had changed over time from asking to come onstage and sing, to requesting things like “Dave! Shotgun a beer with me!” “It’s come to that? Now I’m like Cheech and Chong?” Dave let the fan know that he’d love to, but there were Covid restrictions. But Dave did oblige and walked over to what looked like a Marshall amp, but was really a mini fridge. He pulled out two cans, one for himself and one for the fan and they simultaneously chugged their beers. Anything for the fans.

Throughout the night, the longtime Foo Fighter faithful were rewarded. “There’s some people that have been coming to shows for twenty fucking years…I see you. This song is for the old-school, hard-core motherfuckers,” and with that the band went into “Aurora” from 1999’s “There is Nothing Left to Lose“.

With midnight approaching, Dave wasn’t down with any “sweet, sappy goodbye shit. Fuck that!” and instead the song “Everlong” served as the farewell. The band was then headed to Northern California, wrapping things up in Fresno. The band will be back on tour in early 2022. 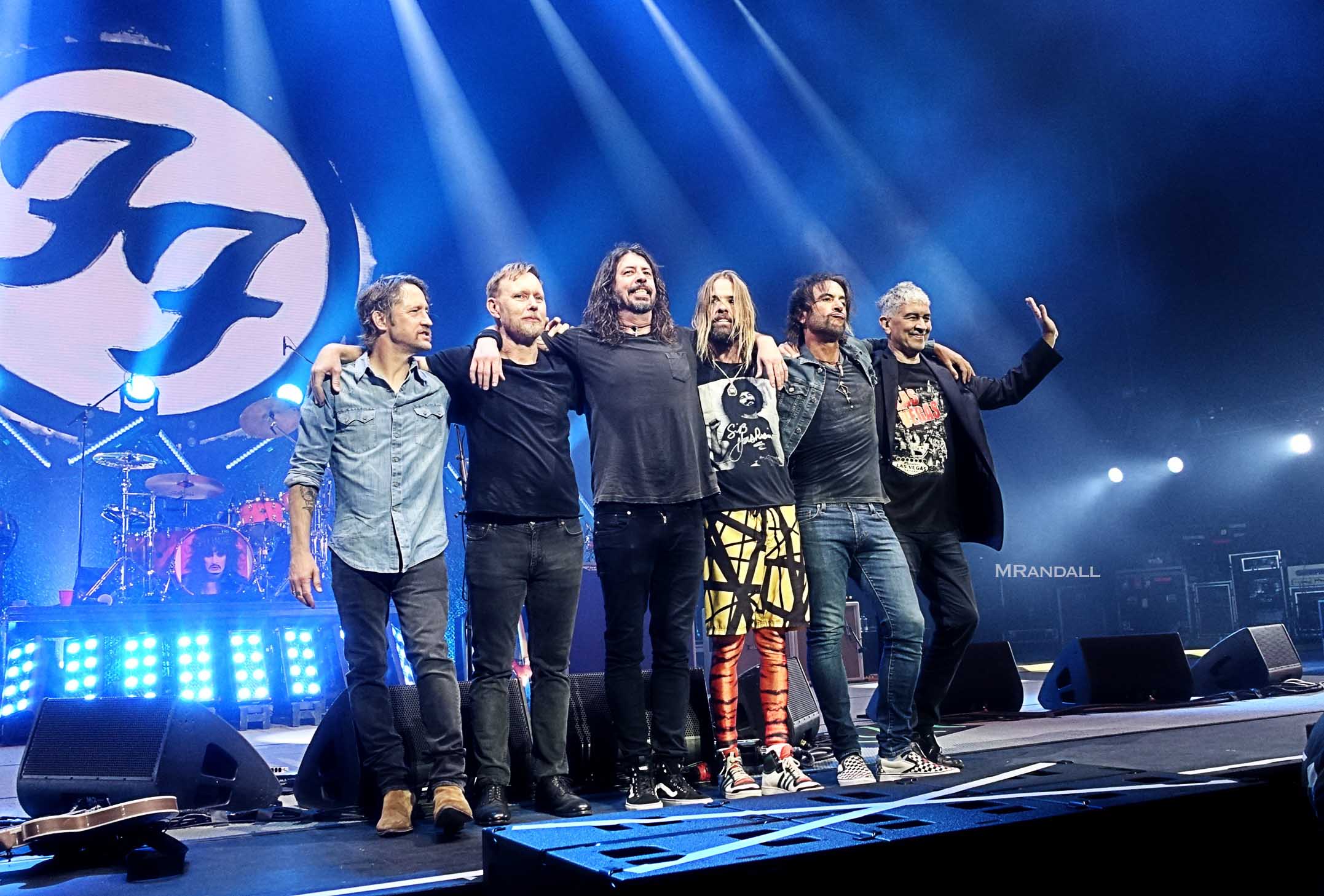