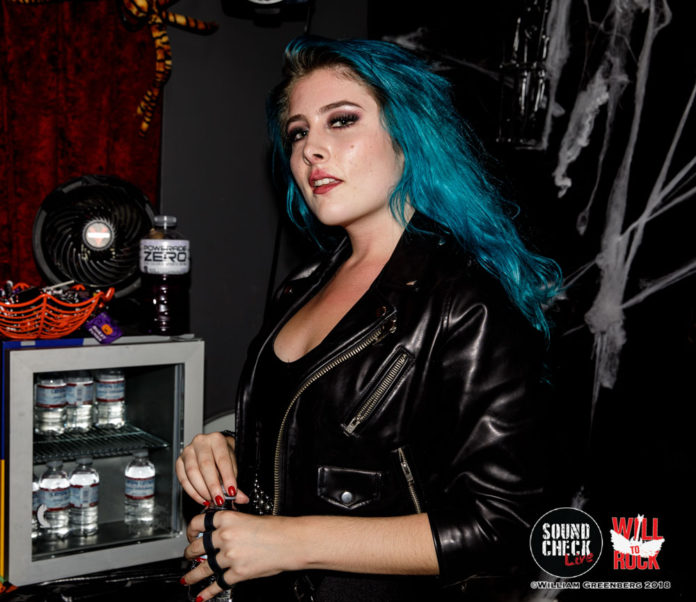 WillToRock’s Tara Lakatos talked with burgeoning Rock Goddess, Diamante about her current tour, her latest single and video for “When I’m Not Around” (written by songwriting legend, Diane Warren), her dream tour and Blue Gatorade…

Tara: Thank you very much for having me here. Your new track “When I’m Not Around” is dropping this Friday, which I’m super excited about. It was written by the legendary Diane Warren, how did the song come to you to record it?

Diamante: What’s interesting for me is, I have never recorded a song that I didn’t write unless it was a cover, just because I feel that writing your own song is how you connect with them. So, I feel really strongly about that. When I heard “When I’m Not Around”, I had this feeling of, I feel like I wrote it, I felt like I wrote this song, even though I didn’t. It felt like my story, felt like my words. So, I told my A&R at the label, I really, really want to record this song, I really want to cut it, it means a lot to me. It’s saying things that I myself wasn’t able to say. And he’s like, it’s a Diane Warren song, so I don’t know if that’s gonna be doable. We had to ask for permission, obviously and she said yes. I went to NRG Studios in Burbank, before leaving for this tour. I recorded the song and the coolest thing ever is when she heard the final product, she loved it. And what she said, which is a huge compliment in my eyes, is that she believes every word of it when I’m performing it, I’m singing it. So, it’s really cool to hear that from her. Especially because she’s had the song in her pocket for like, seven, eight years. Wow, wild crazy.

Tara: The video for “When I’m Not Around” is also coming out this Friday.  Is there anything that you can tease us with about that? Are you keeping it all under wraps?

Diamante: It’s not really that under wraps. I think the video is really cool, because it’s, it’s how I feel about the song and it’s my experience with love. Every single time where you’re not appreciated by someone until after you’re gone, and they don’t realize what they have until you’ve left. So, it’s very literal in the sense that it’s almost like paranormal in a way like popping up everywhere. I’m driving this guy crazy. So, it was a lot of fun to shoot, we shot at the Viper Room in L.A., legendary venue.

Tara: So, your debut album was heavily influenced by the 80s rock sound.  You had mentioned previously that Joan Jett was especially an influence for the track “Coming in Hot”.  The new single’s a bit heavier and has a more modern sound to it. Will your next album, follow the trend? Or are you going to mix it up?

Tara: So, you’ve been a part of a few incredible tours. You’ve been able to tour with bands such as, Five Finger Death Punch, Shinedown, and you’re back out with Breaking Benjamin and also got to be out with Bad Wolves. How has the experience been being on such huge tours? 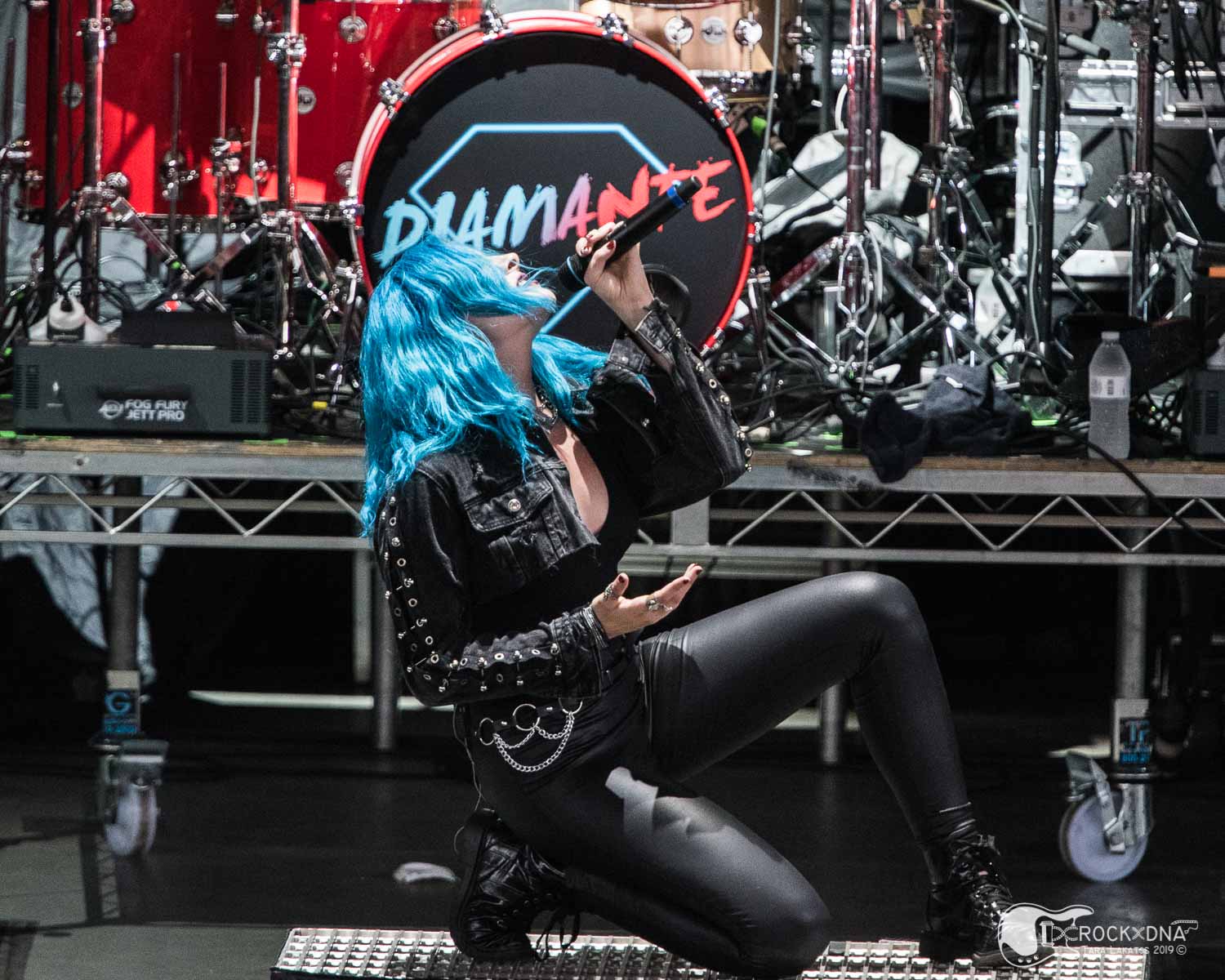 Diamante: Unreal, just to know that from one song, “Hear Me Now” with Bad Wolves. I was 21 last year and I was able to step out onto arena stages and amphitheater stages for the very first time and do this level of touring.  Like you said, go out with bands of the caliber like Shinedown and Breaking Benjamin, Five Finger Death Punch. It was such a great training session all of last year, because I was only getting up to sing the one song, but I was becoming familiar with how you interact on stage when it’s that big and how you connect with people when you can’t even see the third row. So now this summer, a year later, being able to be again on the Breaking Benjamin tour, at the same exact venues and do my own set, I feel like it was the perfect path to take. 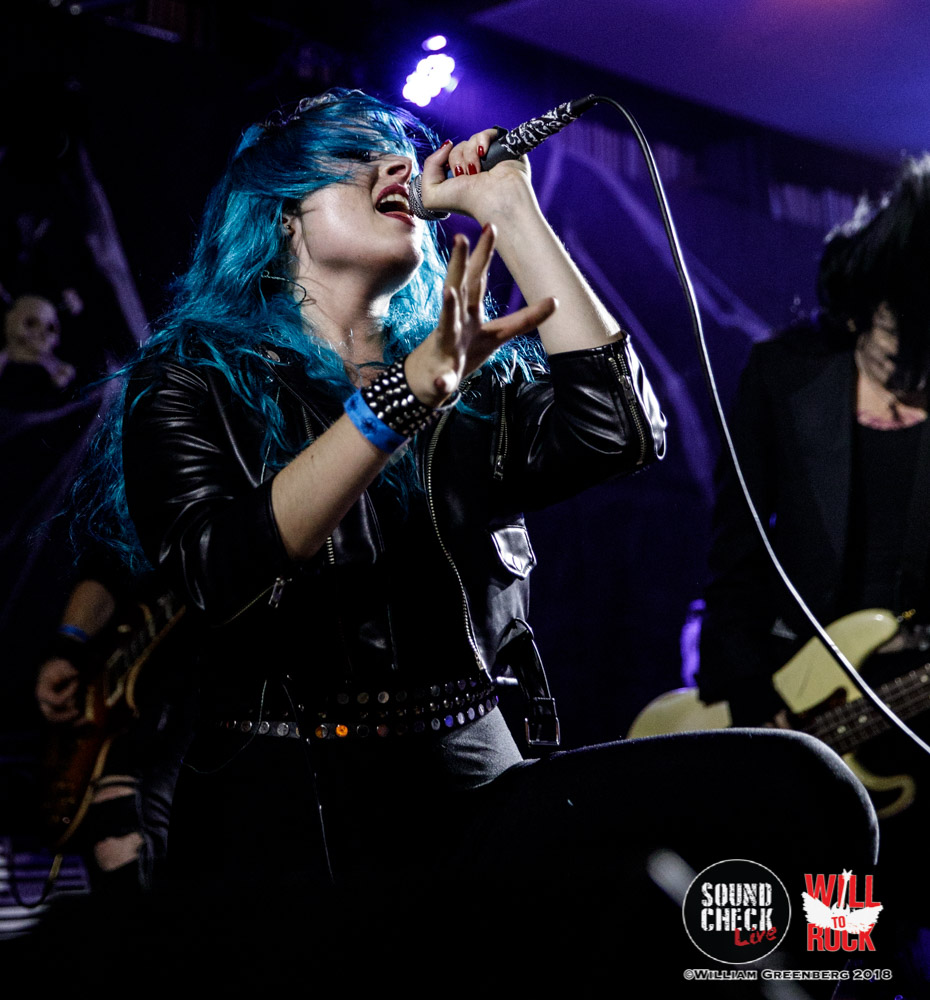 Tara: Do you think that having “Hear Me Now” come out a little bit before your own album helped people get familiar with you that hadn’t heard of you before?

Diamante: Absolutely, yeah, it was like, first step.  I mean, I knew from the beginning that that song was amazing, but I would never would have guessed that it did what it did.

Tara: If you could put together your dream tour who would be on it?

Diamante: I was having this conversation last night on the bus. That’s so funny. I always say Guns n” Roses. It’s like if I could just be direct support that’d be amazing.  Lady Gaga is a huge one for me, that’d be the coolest tour ever. Um, I’ve always wanted to do a Marilyn Manson or Rob Zombie tour, and two other bands that I really want to tour with are Halestorm just because she’s incredible, and Shinedown because I love that band. 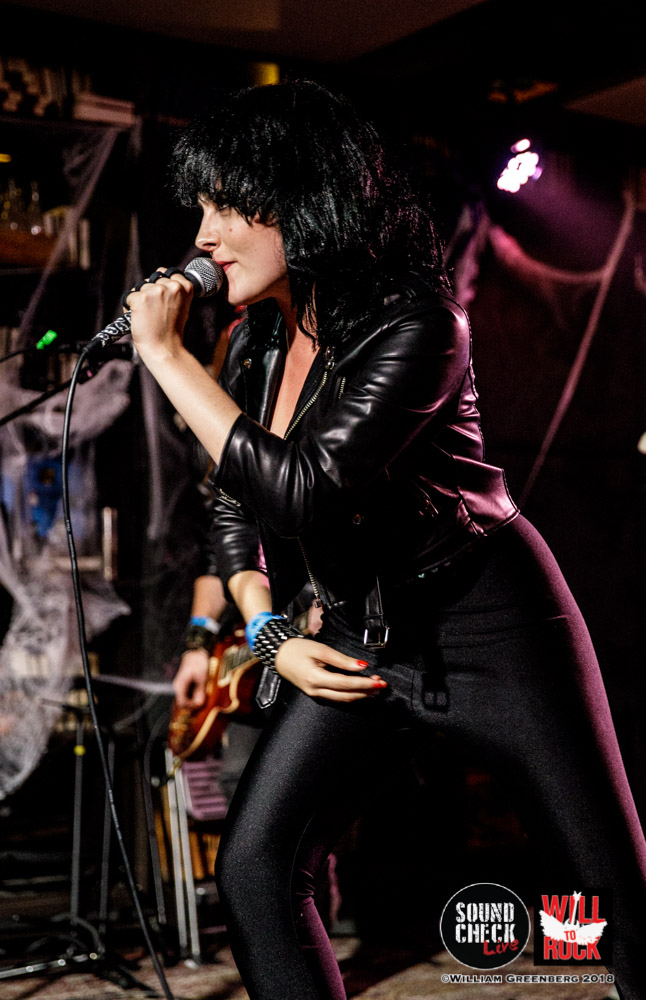 Tara: Is there anyone that you would like to collaborate with?

Tara: So, I do follow you on your social media’s. I saw the other day that people were asking about paid meet and greets, and that you don’t do it, that you go out and meet the fans. I know a lot of up and coming bands usually do that, and then as things go on, people start to charge because things get chaotic. I saw Ash Costello mention on your feed that she was a fire hazard and I have seen that. Do you think your opinion will change over time with that? Just because as you grow, or?

Diamante: No, I don’t think it will. I think I’m just going to be smarter about the way that I do meet everyone. If I get to the place, I think I will get, you know, 5 years, 10 years from now I don’t think I’d be able to walk into the middle of an amphitheater lawn and just hang out. But I don’t think I will ever pay or sorry, charge for meeting greets. I think I’ll just, you know, select people. Kind of like how Taylor Swift does, she’s never charged.  So, I think that’s the biggest way to say thank you to the fans. And also, just me personally, I just can’t get the idea in my head of someone paying to meet me, it just feels weird.

Tara: Since you are so fan friendly and go out after the sets, have you ever run into a scary or bad experience?

Diamante: Um, not so much scary thank God, but there’s moments when people can get a bit aggressive. We try to keep it really streamlined, so it’s like a direct line. If you have merch, you can come to the front of the line and then try to do the kids first. You know, like people are out here drinking since the middle of the day. Yeah, so people can get a bit aggressive, but thankfully, I have people around me, so I know I’m safe.

Tara: Where do you get your stage outfits?

Diamante: So usually, I love just shopping online. I type in like 80s metallic, catsuit rocker, like all these things, and I would find my own outfits. But for this summer run, I decided to do a stylist.  I hired someone to get clothes for me for this tour, because I knew I needed the wardrobe to be 100%.  I went with her in L.A., we went shopping on a street called Melrose. They have a lot of cool, like vintage rocker clothing. That’s where I bought my hat that I wear all the time.  It’s important to have good stage-wear. 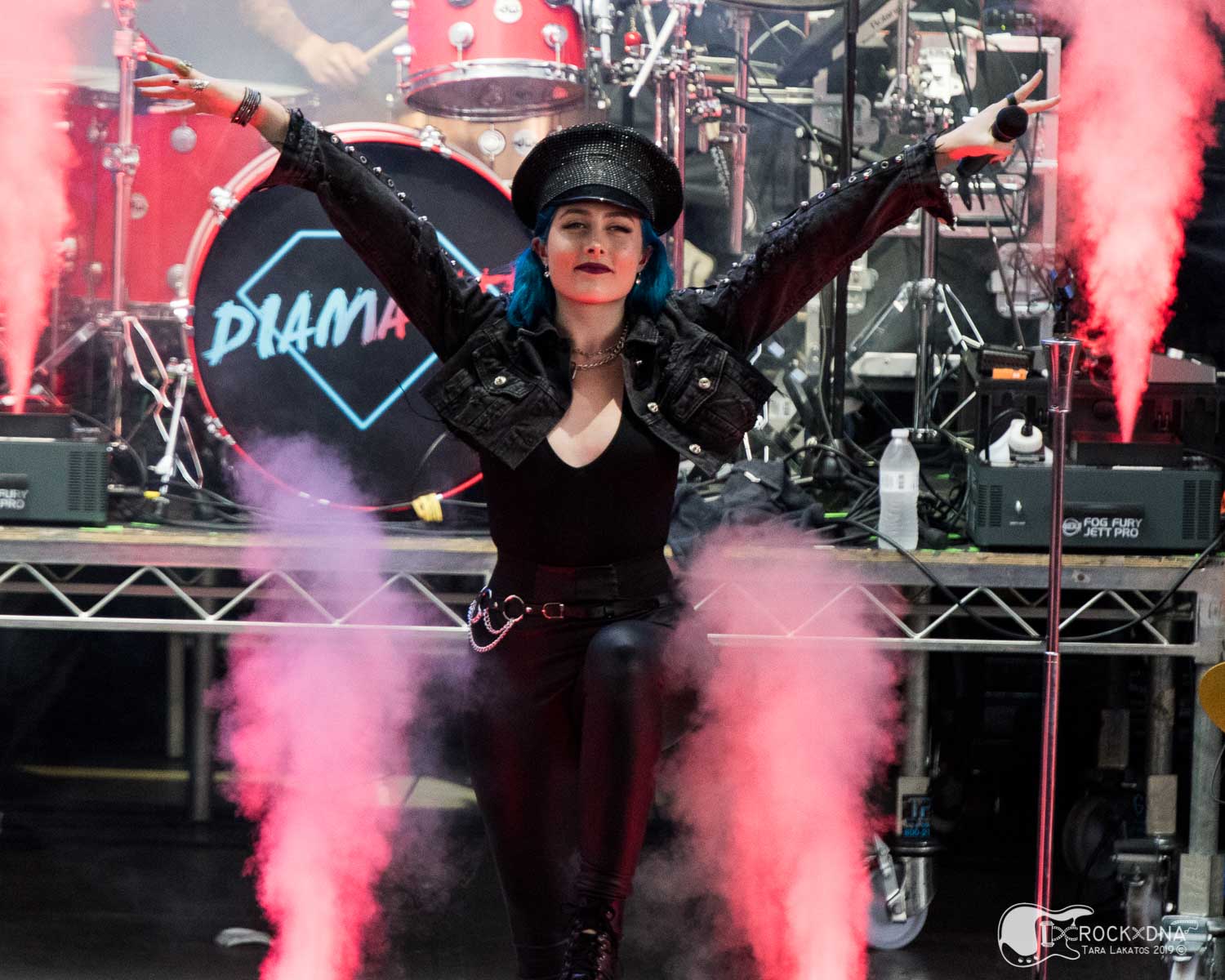 Tara: Have any of your idols randomly got in touch with you? Or have you been surprised if anybody knew who you were that you were like, oh, wow, they know who I am?

Diamante: Honestly, Three Days Grace on this tour. I met them day one and they’re saying to me like, wow, your song with Bad Wolves, “Here Me Now”, that song was huge. Canada played it on the radio station every day.  We’re so happy for you and how much you’ve grown in the last year. Like, you know who I am. Oh, cool. Like I used to listen to them when I was in high school. So yeah, touring with these bands is so full circle.

Tara: Do you have any strange requests on your rider?

Diamante: Not really strange. I like getting Blue Gatorade and only the blue flavor because it’s my favorite flavor. I love blue candy blue, sports drinks. I always get a bottle of Patron because tequila is my go-to especially right before show, I always take one little shot of Patron. That’s like my good luck thing. What else? I try to stay healthy. So, I get hummus and pita chips, vegetables.  We wanted to get puppies on the rider.

Diamante: Unfortunately, I’m not too involved in charities at the moment. But I’m very passionate about the environment. I really love animals and I’d love to get more involved with dog rescue places. I know, a couple of artists who donate like a percentage of merch to shelters.

Tara: If you’re interested in Baltimore, there’s a rescue called Show Your Soft Side. I know that Brent has worked with them and Lzzy has also. They usually will take a photo of you with a dog and then they’ll sell a poster. I think they’re $5 and all that money goes to their rescue. So it’s based out of Baltimore, Maryland, but they have a Facebook that you can check out.

Diamante: I love dogs, I have a rescue so it’s very close to me. I want to save as many as possible.

Tara: Is there anything that we missed or anything else that you would want your fans to know about you?

Diamante: Yes, the idea is that I’m going to be hopefully in the fall, either continuing to tour or getting in the studio and finishing the second album.

Tara: Thank you so much. 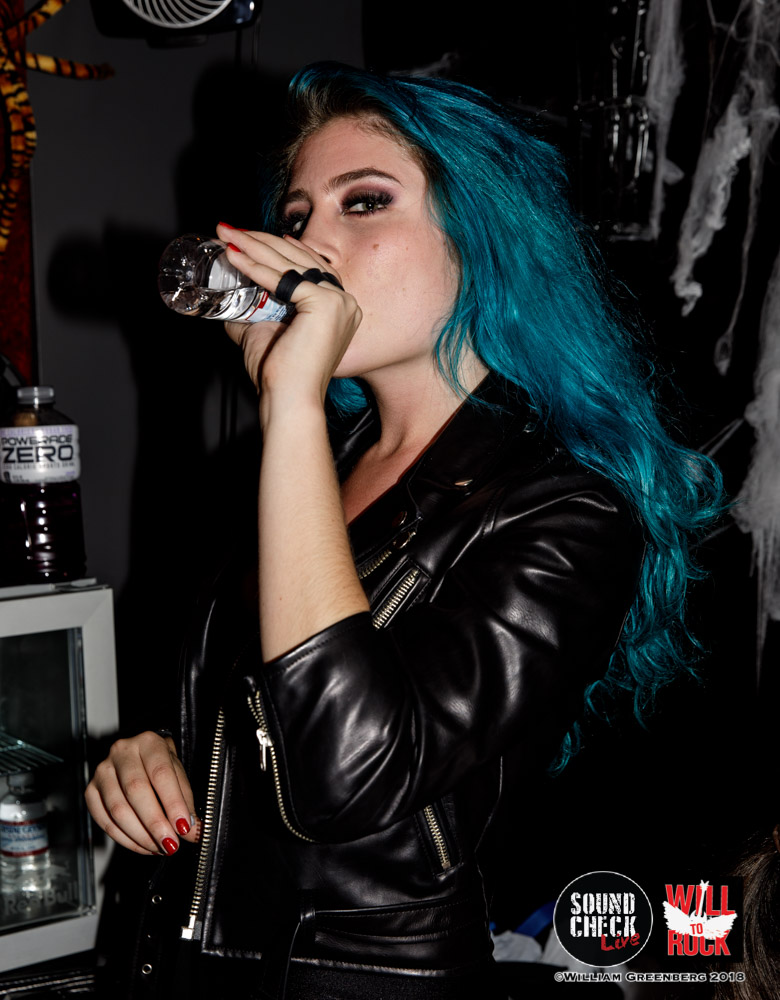