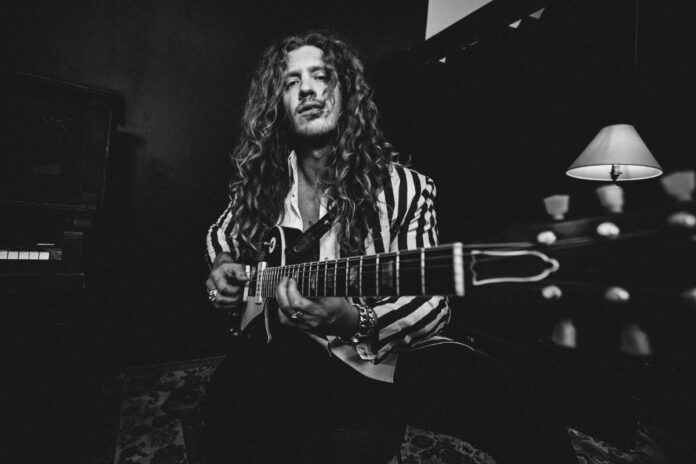 In other news, Jared has teamed with Artist Works to offer a limited run of brand-new VIP online guitar-playing lessons in rock and blues guitar. Jared’s guided path of lessons includes custom riffs and exercises paired with downloadable play-along tracks recorded exclusively for this course. From string basics and guitar tuning, to slides, bends, and speed & accuracy exercises, these guitar lessons give everything needed to solo, improvise, and jam with serious Blues Power. For more information, visit: https://artistworks.com/guitar-lessons-jared-james-nichols

After issuing the much-acclaimed 2020 single “Threw Me to the Wolves,” which showed him stepping outside his core sound, the blues-power firebrand entered Blackbird Studios in Nashville with producer Eddie Spear (Jack White, Chris Stapleton) to record his forthcoming four-song EP, Shadow Dancer. All live, tracked to tape, high-volume and no safety net, Shadow Dancer is Nichols’ most heated and varied offering yet. From the anthemic and hooky lead single, “Skin N’ Bone” to the roiling and turbulent “Saint or Fool,” the full-throttle aggro-chug of “Bad Roots” to the dark atmospherics and deep grooves of the title track, Shadow Dancer sees Nichols digging deep to conjure a set of songs infused with his characteristic passionate vocals and wild guitar pyrotechnics (throughout, his guitar, aka Old Glory acts as a second voice, singing and screaming, moaning and wailing right alongside him) while also fearlessly pushing out on his blues-rock boundaries.

“I’m going to a lot of places I’ve never gone before,” Nichols acknowledges about the new EP. “For the first time in my life I said, ‘I’m going to write with no filter – I don’t care if it’s blues, if it’s rock, if it’s this or that. Whatever’s going to come out is going to come out.’ That was such a liberating feeling. It was so cool to spread my wings and say, ‘How far can I take this before the train goes off the rails?’”

Anyone who has experienced the Jared James Nichols in the flesh knows that the man – and his music – is a whirlwind of unbridled emotion and energy. And indeed, for Shadow Dancer he and his trio brought the onstage Jared James Nichols experience straight into the studio, laying down the tracks, guitar solos included, live and loud and capturing, as he puts it, lightning in a bottle. “Before this, I don’t know if I ever felt completely comfortable in the studio,” Nichols admits. “I would say it took three years of touring, sleeping in a damn van and playing shows every night to figure out what was the core of what I was trying to say not only onstage, but also as a songwriter. We finally captured it on this record, mostly due to the fact that we didn’t constrain ourselves to anything – we just went in and played in the most organic, natural way we could. And it had to be that way in order to capture the excitement and the energy and the overall feeling of this music.” 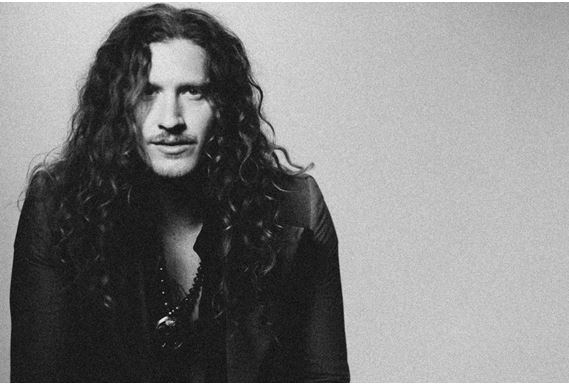 While Shadow Dancer is infused with plenty of awe-inspiring six-string moments these songs also reveal new sides to the JJN. For “Skin N’ Bone,” on which Nichols takes a hard look at what divides us as people but also, more importantly, what should unite us. The same could be said for “Saint or Fool,” which focuses in on “that constant fight between good and evil,” Nichols explains. “We all know that there’s a dark side to life, and it’s very easy to get sucked into that. So the message is kind of haunting, and then I wrap it up in this structure that gives it a really uneasy vibe. There’s this weird chromatic walkdown riff, a really hypnotic verse, just a lot of different melodic ideas I’d never tried before. And vocally it takes you somewhere pretty intense. It isn’t the prettiest song, and it kind of stands out for that.” The EP’s title track rides in on an evocative, watery guitar line and hushed vocal before exploding with an anguished, hard-rocking and heavy-riffing chorus. The track presents a heavier, grungier side of Nichols, but it’s all part of his musical DNA. “I love the blues, but I also grew up on ‘90s hard rock – Alice in Chains, Pearl Jam, Silverchair, Stone Temple Pilots,” he says. “And so I wanted to bring in those different colors.” And if you’re looking for those different colors, look no further than “Bad Roots,” which marries a Tom Petty-esque classic-rock chord progression to a full-on heavy metal rhythmic assault, and tops it off with a hushed, semi-chanted vocal.

“I love trying to push the limits of what I think is possible with my songwriting and with this music,” Nichols says. To be sure, it’s something he’s been doing since his earliest days on the scene. “I used to be, like, a 12-bar guy,” he recalls about his early approach to the blues. But whether it be his unique, pick-less approach to guitar playing, or his desire to create his own one-of-a-kind instrument – which, in a nice full-circle moment, has since been recreated twice by Epiphone as the Jared James Nichols Les Paul Custom “Gold Glory” in Gold and “Old Glory” in Ebony–Nichols was just named Gibson’s newest Global Ambassador, an honor previously bestowed on Slash–he has ever since carved out his own singular path in the music world, and in the process has brought the blues screaming into the 21st century. “I try and interpret this music in my own way,” Nichols says. “For me, it’s not about trying to be traditional or act as if I’m from a certain era – it’s about breathing fresh air into this music that I love. Shadow Dancer, he continues, “feels like 2021 blues – it’s all my emotions, all my feelings, all my angst and energy bottled up in one record. It’s my version of the blues.” 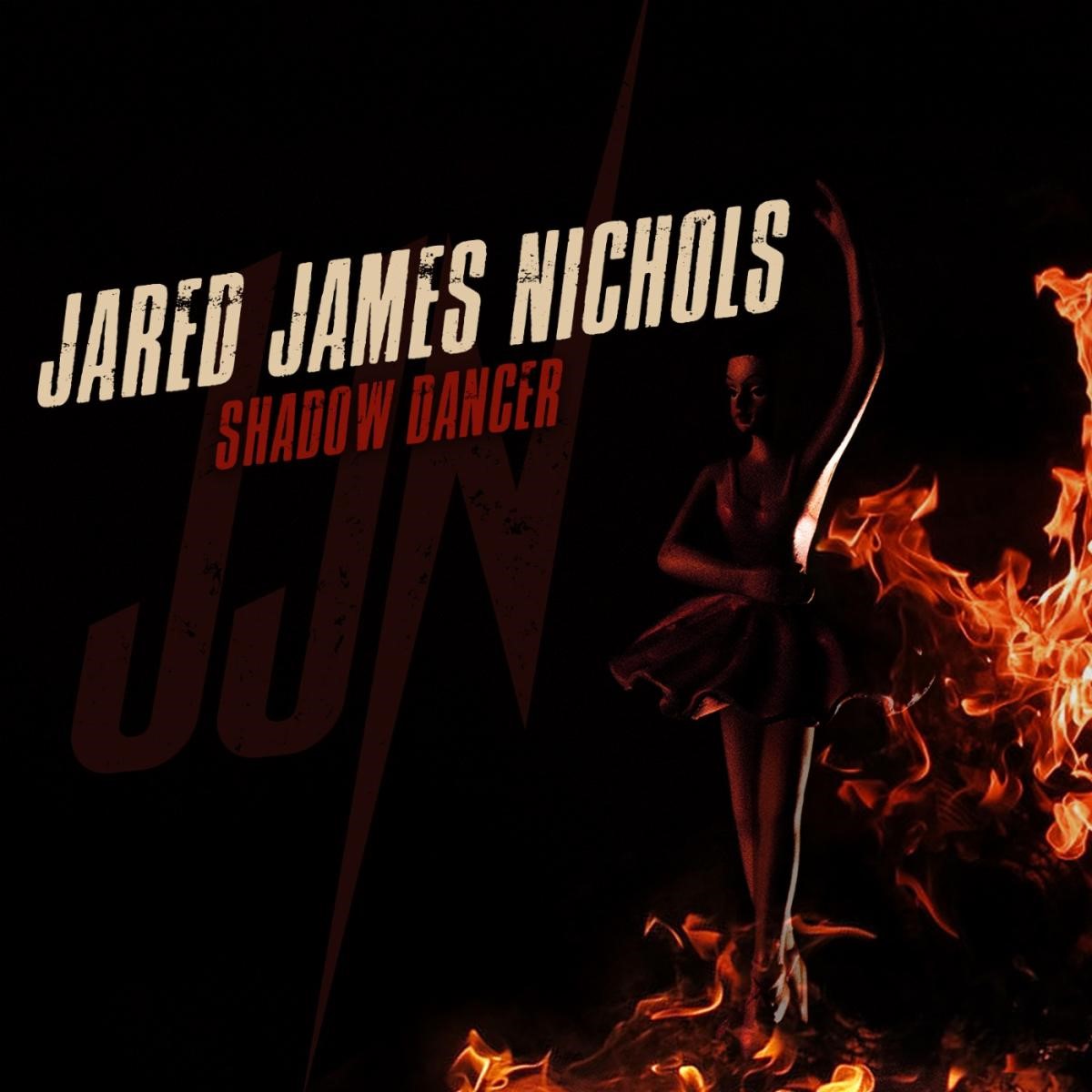 “guitar-driven hard rock with a Southern flair. …it’s bluesy, country undertones combined with a driving beat, is too rare a combination in music today.”

“Jared James Nichols is a larger-than-life guitar player. …[on the single ‘Bad Roots’] Nichols summons a monster riff for the chorus and is typically blazing on the solo on the track taken from his forthcoming EP.”

“Jared James Nichols has asserted himself as one of the world’s top modern bluesmen, and he illustrates exactly why on his latest single, ‘Bad Roots’. Verging on the boundaries of hard rock, the track is fueled by crunchy palm-muted powerchords throughout, and features a dose of JJN’s gain-heavy lead wizardry at the 2:09 mark.”

Following below are the current tour dates for Jared James Nichols: 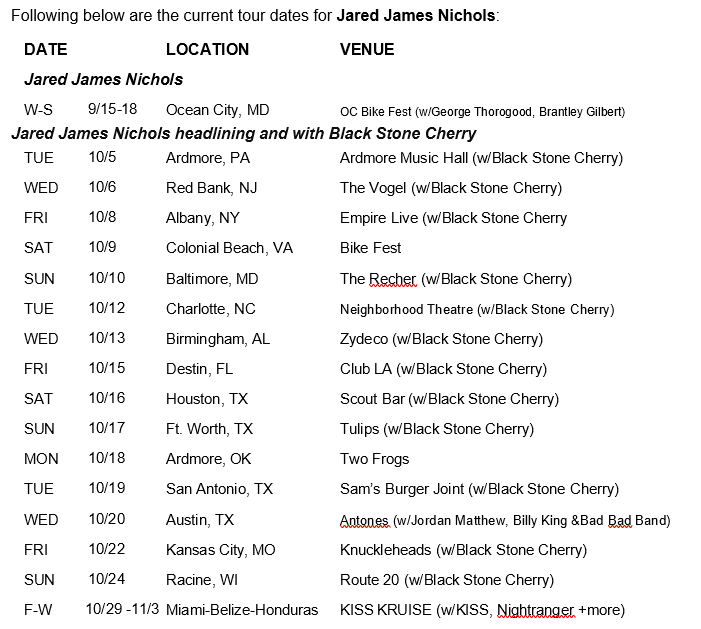