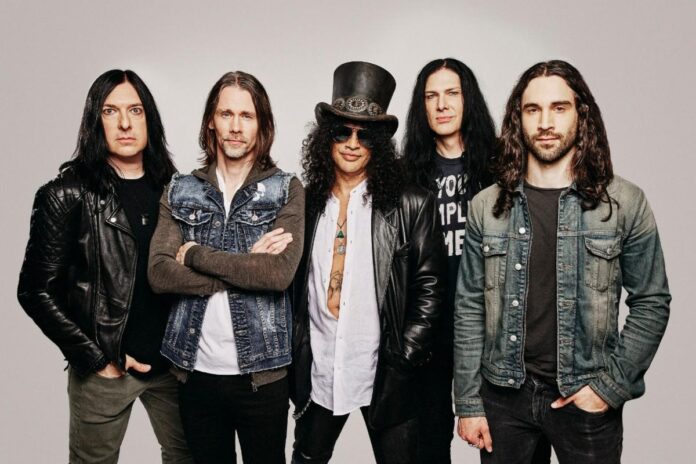 HITTING 28 MAJOR CITIES TO KICK OFF TUESDAY, FEB. 8 IN PORTLAND

LOS ANGELES, CA (October 22, 2021) A decade and four albums into their career, SLASH FT. MYLES KENNEDY & THE CONSPIRATORS haven’t been deterred by any obstacles in their path–including a global pandemic. SLASH FT. MYLES KENNEDY & THE CONSPIRATORS have announced today, October 22 they’ll release their new album titled 4 on February 11, 2022, via Gibson Records, in partnership with BMG. 4 is SLASH’s fifth solo album and fourth overall with his band featuring MYLES KENNEDY (Vocals), BRENT FITZ (Drums), TODD KERNS (Bass & Vocals) and FRANK SIDORIS (Guitar & Vocals). The album pre-order for 4 is out today, HERE.

A vibrant rock album fueled by memorable guitar hooks and compelling melodies, big choruses, and even bigger riffs; 4 builds on the legacy of SLASH FT. MYLES KENNEDY & THE CONSPIRATORS’ prior work. That sensibility comes through immediately on the opening track and first single, “The River Is Rising.” The group has unleashed “The River Is Rising” –today, to radio. Watch and share the official video for “The River Is Rising” -shot on location in downtown Los Angeles with Gibson TV director Todd Harapiak

SLASH describes the creation of the song “The River Is Rising,” “There’s two or three songs on the record that were written during the pandemic; everything else was written before. ‘The River is Rising’ was one of the last songs I wrote before we started pre-production, and because it was so fresh and has a certain groove and energy to it, it was the first thing we really attacked. It’s the newest song on the record, and as for the double-time part, that was something that I came up with and tagged onto the end of the arrangement. Then when we were over at RCA, Dave Cobb suggested we do it right after the breakdown. So, we went straight into the fast part, and I just started doing the guitar solo over it. It was one of those things where we were jamming around, trying to fish out the arrangement, and it just happened.” While MYLES KENNEDY adds, “The lyric ultimately explores how humans can be brainwashed or indoctrinated by some sort of dangerous idea. Once we shot the demo back and forth a few times, I personally felt confident that we had the album opener. To me, it’s an important track.”

For 4, SLASH and the band traveled across the country together to Nashville, TN, and recorded the new album at the historic RCA Studio A with producer Dave Cobb (Chris Stapleton, John Prine, Jason Isbell, Brandi Carlile), revealing a stunning new sound and style all captured live in the studio. Cobb shared the band’s desire to lay down the tracks live, in the studio including guitar solos and vocals–a first for the group. The band’s previous albums over the last decade Apocalyptic Love, World on Fire, and Living The Dream have continued on an upward trajectory, all achieving Top 5 Billboard charting debuts in the U.S. and reaching the Top 10 on 12 major charts across the globe. To date, the three SMKC albums have now garnered 10 consecutive Top 5 Radio singles, spawned sold-out world tours, and have earned SLASH and the band the best critical acclaim of their career with their latest album Living The Dream (2018) singled out by the Los Angeles Times, Classic Rock, Guitar World, Loudwire, LA Weekly, and more, as their best songs to date.

Today, the band has launched a DSP and physical pre-order in the following formats for 4, including a Deluxe Vinyl Box Set featuring a vinyl gatefold jacket in four colors (Black, Red, Blue, and Purple), randomly distributed inside a mirrored O-card. Each vinyl is 140g black vinyl and comes with a guitar pick, an Axe Heaven Custom Limited Edition 4 Slash Les Paul Mini-Guitar, CD softpack in one of the four colors above (also random), the O-card and a guitar pick, a Cassette Tape featuring an exclusive 4-song live rehearsal titled “Live Rehearsal Tape 5/28/21,” a 36-page photobook including an SMKC interview and handwritten lyrics, an embroidered sew-on patch, a Signed Lithograph (limited to the first 500 copies) and a pick tin with 4 custom SLASH guitar picks. A Deluxe CD Box Set, a full album Cassette Tape, and Standard Vinyl and CD packages are also available. To view the full variety of 4 album packages available, go to: http://www.slashonline.com. 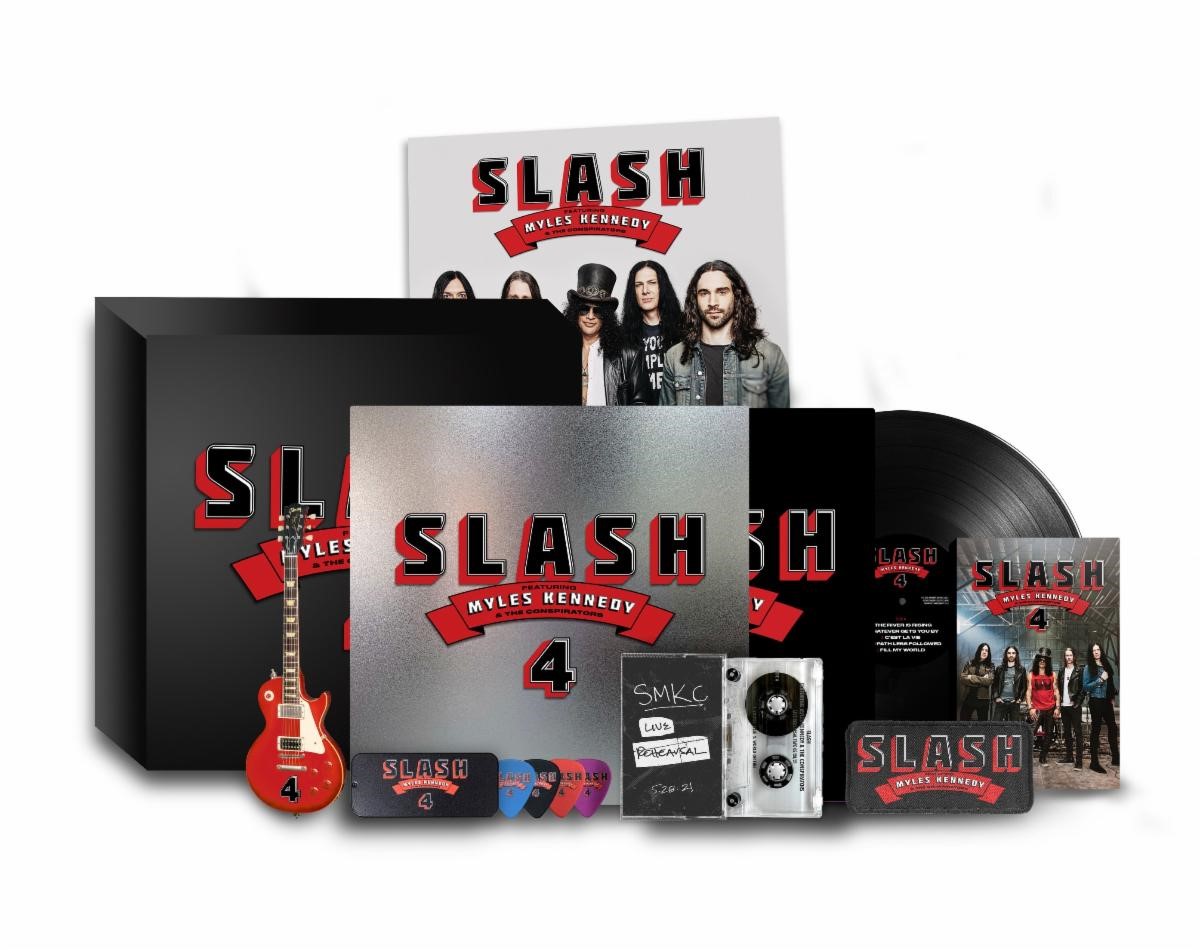 The new album 4 has the added history-making distinction of being the first-ever album to be released on the new Gibson Records label, which is headquartered in the iconic American instrument brand Gibson’s hometown of Music City, Nashville, TN. In light of the 30-year partnership between Gibson and the GRAMMY Award-winning, Rock and Roll Hall of Fame inductee SLASH, it makes sense the new SLASH FT. MYLES KENNEDY AND THE CONSPIRATORS’ album 4 will be released via Gibson Records–in partnership with BMG.

In another groundbreaking move, Gibson will commemorate SLASH FT. MYLES KENNEDY AND THE CONSPIRATORS’ first studio album with Gibson Records, with a first-ever limited–edition SLASH Les Paul Standard 4 Album Edition guitar package that will be released on February 11, 2022, the same day as the album release. Only 250 Slash Les Paul Standard 4 Album Edition guitars will be made available for global release on www.gibson.com and at select authorized Gibson dealers, and the unique guitar package also features the new SMKC album 4 on vinyl with an exclusive case inside that houses the vinyl, a 4 album guitar pick tin containing a variety of pick colors (8-count), a signed SMKC band portrait, and a 4 album decal sticker. 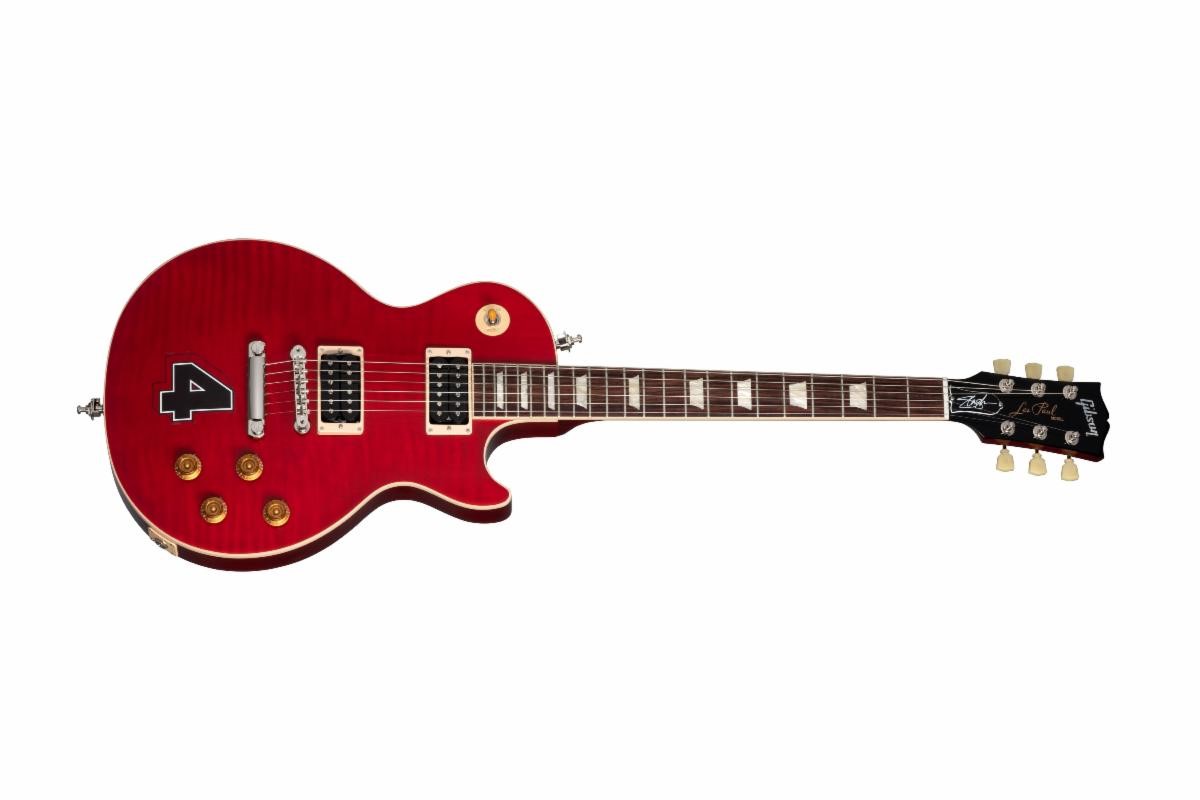 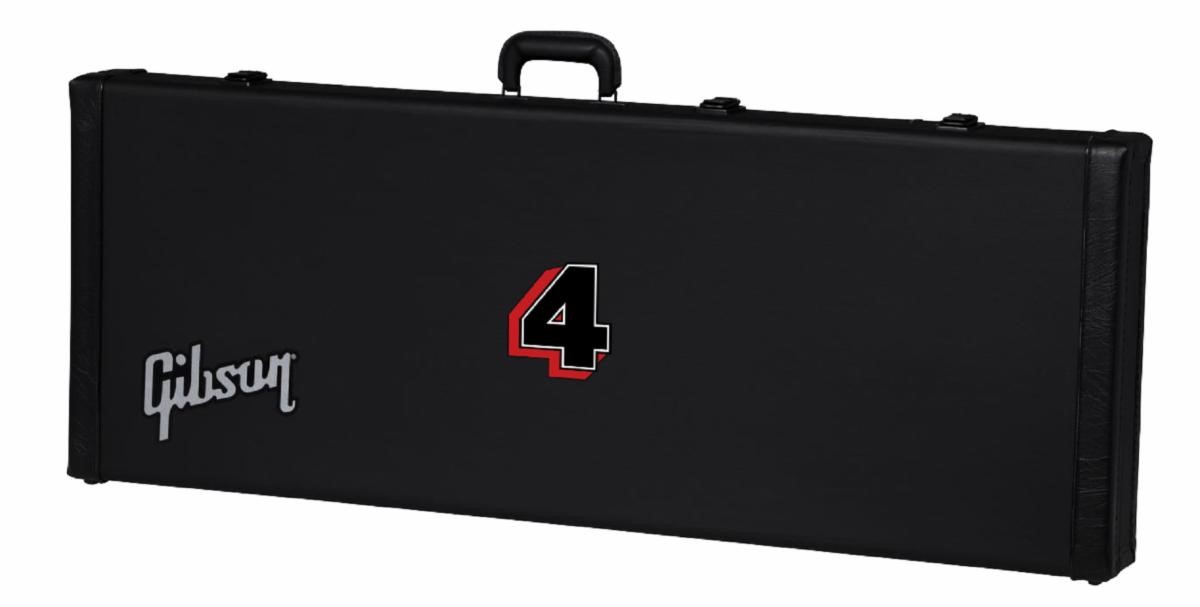 SLASH FT. MYLES KENNEDY AND THE CONSPIRATORS will kick off a North American headlining tour on February 8, in Portland, OR, and hit 28 major cities, including Los Angeles, New York, Boston, Philadelphia, Chicago, Denver, Nashville, Dallas, Austin, Houston, and more, before wrapping-up March 26 in Orlando, FL (all dates below).

St. Patricks Day with FLOGGING MOLLY at the Hollywood Palladium –...