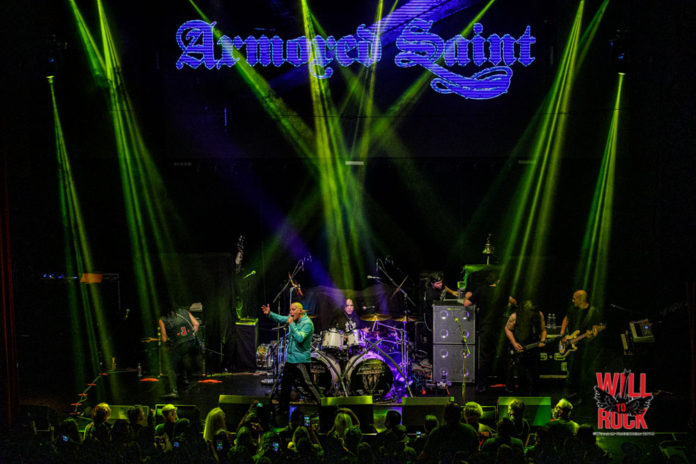 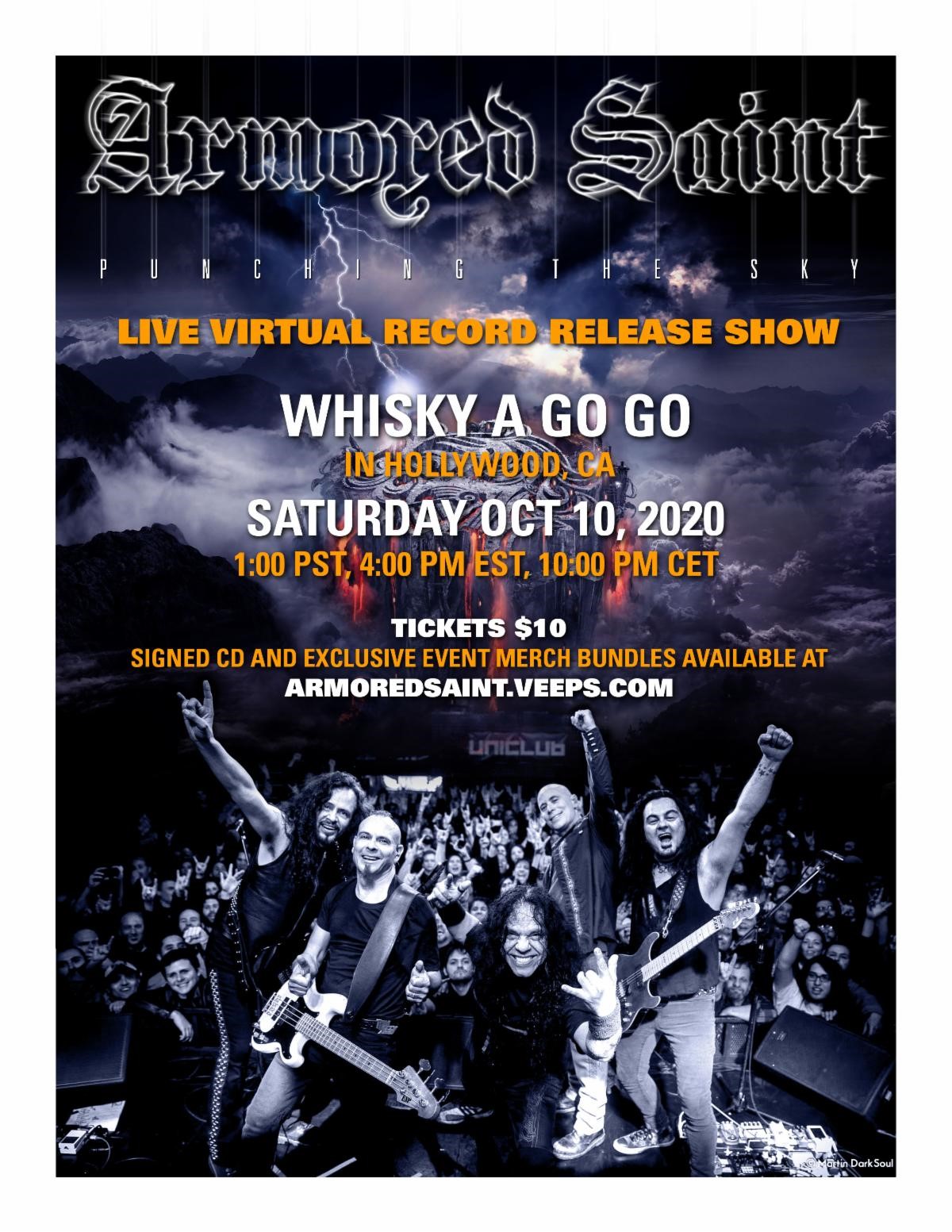 On Saturday, October 10th at 1PM PST//4PM EST//10PM CET, Armored Saint will host a live record release show online for their upcoming album, Punching The Sky (due out October 23rd via Metal Blade Records). Set to take place at the Whisky A Go Go in Hollywood, CA, Armored Saint will be performing a full set, including 4 new songs from Punching the Sky. Additionally, the band will be answering select questions from fans who submit them via a post on their Facebook page: https://www.facebook.com/thearmoredsaint

Armored Saint comments: “We are very excited about our new record ‘Punching the Sky‘, and we’d be pleased if you’d join us in this virtual show to help celebrate the release date. In these strange times where none of us can go to see live music anymore, this is the closest thing we can do about that. We will be on stage, cranking it out as we always do. We will certainly be missing seeing all of you in the venue, but we hope you’ll Rock Out with us in the comfort of your own homes!” 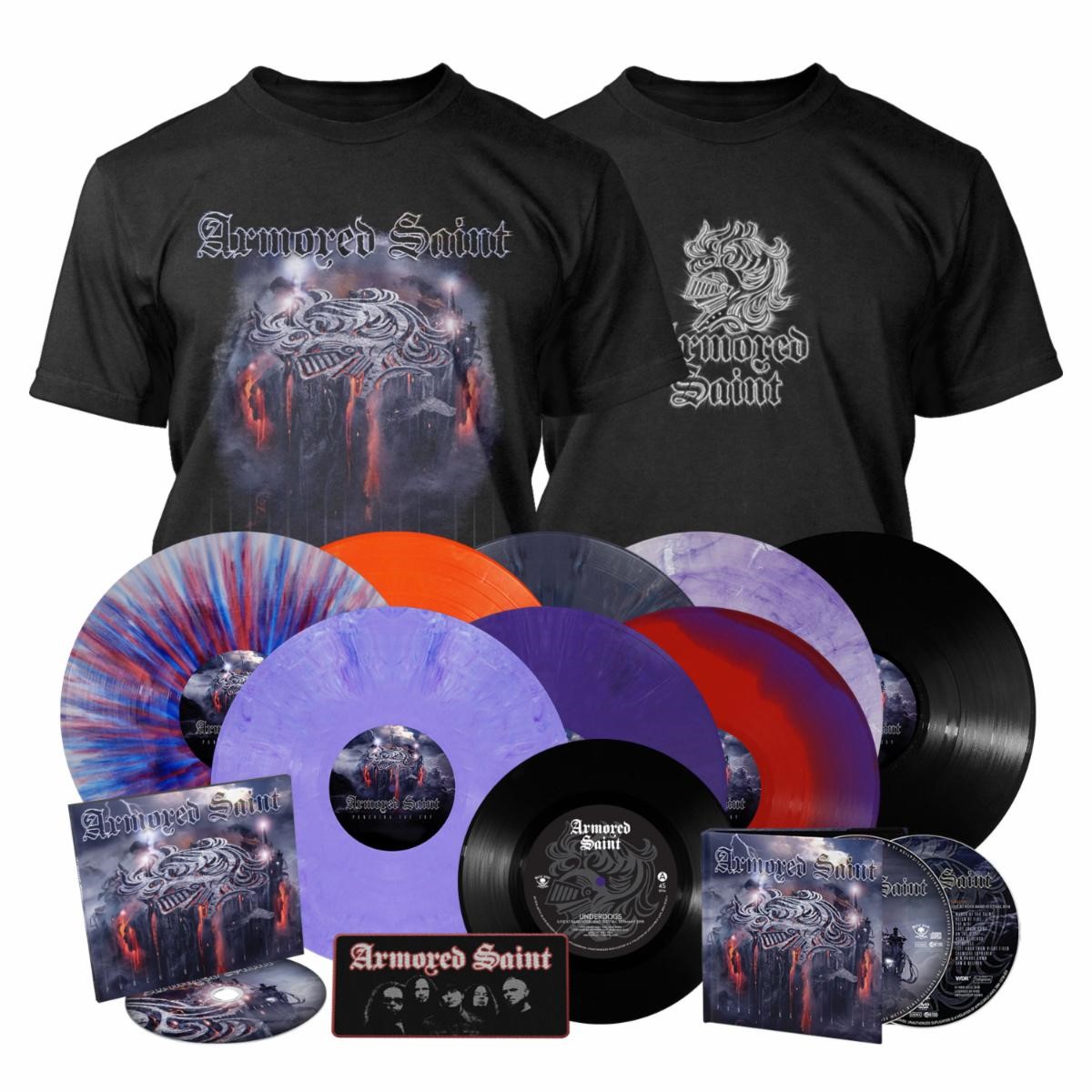 Leaders and stalwarts of the American heavy metal scene since the early 80s, Armored Saint‘s Punching The Sky sees them returning hard. A diverse, attitude-drenched collection, it’s everything the band’s faithful have come to expect from them while pushing their signature sound forward. “The goal is to write really good music. I know I’m stating the obvious here but that’s about the size of our agenda,” says bassist Joey Vera. “We’ve been able to shed a lot of expectations that sometimes plague a band like ours that has been around a long time, and we’ve recently moved into a comfort zone with just being ourselves. We have this kind of freedom now that we didn’t really have early in our career, and we can take some chances and make the kind of music that we want to hear. This record is a reflection of where we are at, right now.” Exploding to life with the crunchy, rousing “Standing On The Shoulders Of Giants” and not letting up until the closing ruthless riff of “Never You Fret”, the record is possessed of an urgency and vigor which very much places it in the right now, but could only be the work of Vera, guitarists Phil Sandoval and Jeff Duncan, drummer Gonzo Sandoval and vocalist John Bush. “When you’re a band that began four decades ago, you really have to push yourself harder than ever when it comes to making a new record,” states Bush. “The last thing you ever want is for it to appear as though you were going through the motions or that you’re just putting a product out to do some touring. The records are immortal. They’ll be here long after us. Every one needs to count in its own individual way.”

With Vera acting as producer, he recruited the same engineering team that worked on Win Hands Down with drums recorded by Josh Newell at El Dorado Studios in Burbank, CA, guitars tracked by Bill Metoyer at Skullseven studios in North Hollywood, CA, and vocals, bass and additional recordings by the bassist at his studio. “I like working with people that I trust and have a good personal rapport with. That same reason is why I hired Jay Ruston (Anthrax, Amon Amarth, Stonesour) to mix the record. It’s important to be able to work with people who understand what the end goal is.” The process of realizing the album was a lot of hard work, Vera admitting he took on too many of the tasks himself, but he states that overall it was a good experience and everyone brought their A-game to the table and the right attitude for getting things done. “At the end of the mixing stage, I always have a hard time walking away from the project we’ve been working on for so long. It’s hard to let it go. The end result is good though. Everyone played and sang their asses off and it shows.” The record also features a few guest musicians further expanding its sonic palette, the whole thing kicking off with the sound of Uilleann Pipes, Vera finding player Patrick D’Arcy in LA and recruiting him to the cause. Guns ‘N’ Roses keyboardist Dizzy Reed also contributes, Vera giving both him and D’Arcy some general directions and letting them loose, both of them delivering strong performances. The band’s own Gonzo Sandoval plays an American Indian flute on “Never You Fret” – a first for Armored Saint and their drummer. Also Jacob Ayala, the son of a childhood friend who is a drum major in high school, added some marching snare on one of the tracks, which really stands out.

With the band’s place in the metal scene firmly reestablished with Punching The Sky, they are staring down their four decade anniversary, which Vera reflects on. “Part of me feels like I can’t believe we’ve been doing this for that long. It’s kind of incredible. So I feel pretty damn lucky really, that we’ve been able to have the support from fans and our record company for all these years. Without this support, we really couldn’t do any of this. So this is the big part of what has kept us going, and when I stop and look around, I am humbled that we’ve had this opportunity to make music and tour for such a long time. That’s what our initial goal was back when we were just 18 years old.”

Punching The Sky track-listing
1. Standing on the Shoulders of Giants
2. End of the Attention Span
3. Bubble
4. My Jurisdiction
5. Do Wrong to None
6. Lone Wolf
7. Missile to Gun
8. Fly in the Ointment
9. Bark, No Bite
10. Unfair
11. Never You Fret