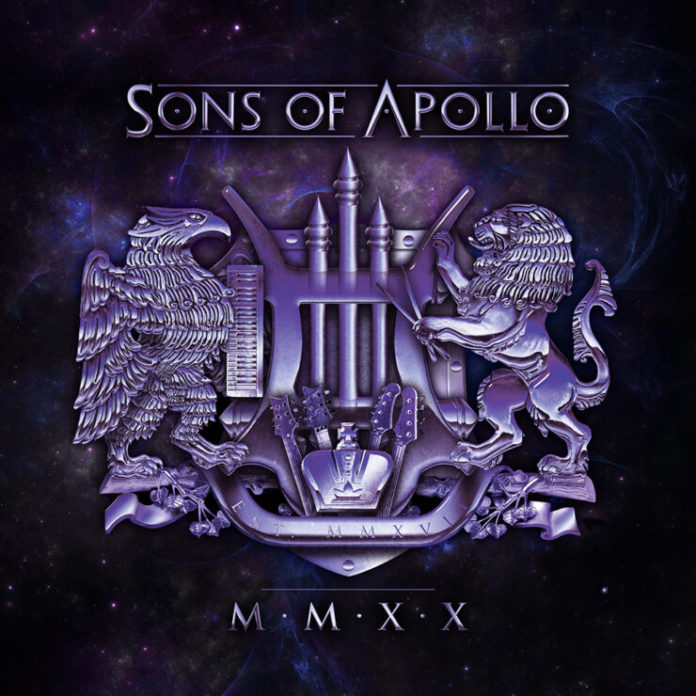 SONS OF APOLLO
LOUDLY RING IN THE NEW DECADE WITH
THE APPROPRIATELY-TITLED NEW ALBUM,
“MMXX,”
DUE OUT JANUARY 17 ON INSIDEOUTMUSIC/SONY;
“MMXX WORLD TOUR” BEGINS JANUARY 24
IN POMONA, CA 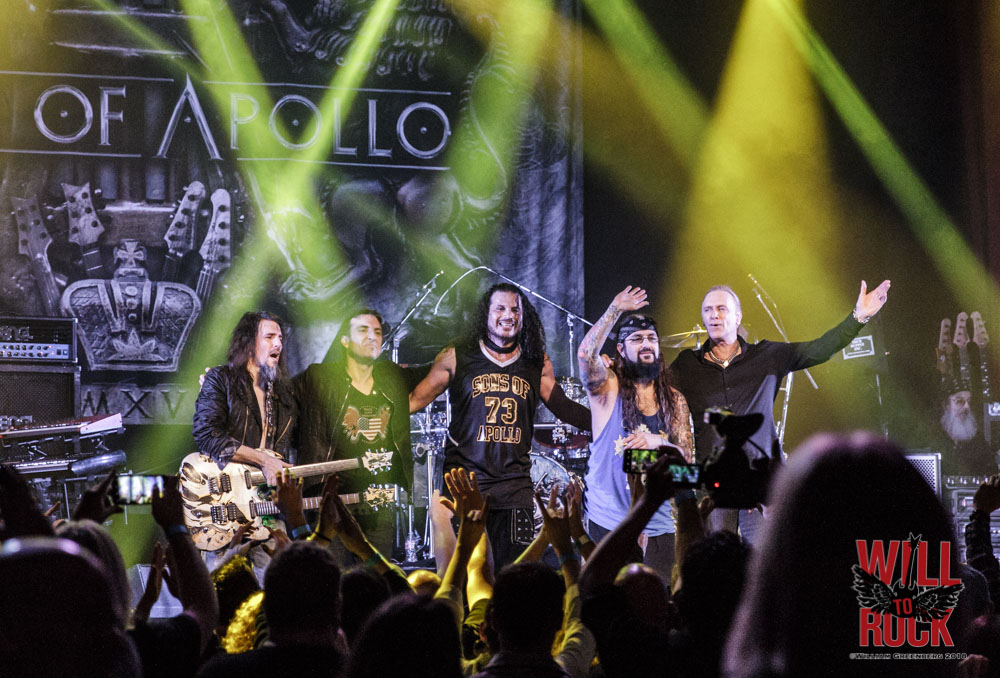 November 6, 2019 — SONS OF APOLLO–former Dream Theater members Mike Portnoy and Derek Sherinian, Ron “Bumblefoot” Thal (ex-Guns N’ Roses), Billy Sheehan (The Winery Dogs, Mr. Big, David Lee Roth) and Jeff Scott Soto (ex-Journey, ex-Yngwie Malmsteen’s Rising Force)–are ready to ring in the new decade with a sonic boom with their second studio album, appropriately titled, MMXX(pronounced: 20/20).
Produced by The Del Fuvio Brothers (Portnoy and Sherinian), MMXXwill be released on January 17, 2020 via InsideOutMusic/Sony as a standard CD package, Limited Edition 2 CD package (which includes instrumental mixes and a cappella excerpts), 2 LP + CD package, and on all digital formats. Pre-orders for all formats will be available starting November 15, which will include an instant download of the album’s first single, “Goodbye Divinity,” on iTunes and Amazon.
A teaser trailer was released on Inside Out’s official YouTube page here.
“Stylistically, we have followed the same path as the debut,” outlines drummer Mike Portnoy. “But we feel that it has come out stronger, simply because we know one another better. PSYCHOTIC SYMPHONY was the first time the five of us had worked together, so there was bound to be an air of experimentation happening. Now, we can draw on having the experience not only of recording that album, but also of touring together a lot. And now there is clearly a lot more obvious chemistry going on.” 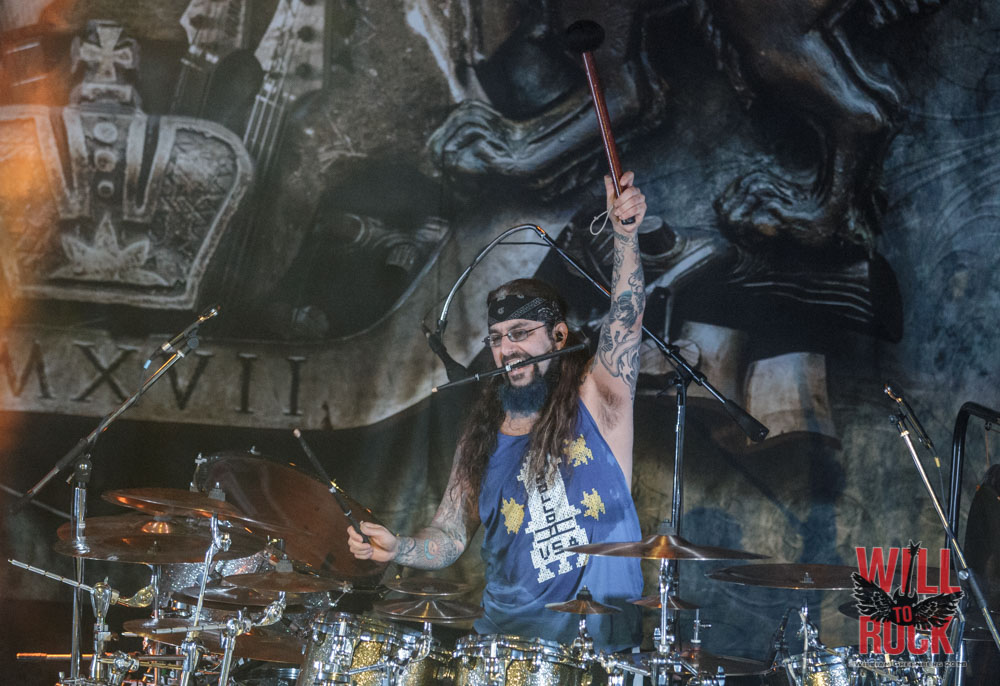 “We did 83 shows on the last tour,” adds keyboardist Derek Sherinian. “And it was so worthwhile, because we came out of it with a stronger bond, and that is certainly reflected in what we wrote.” 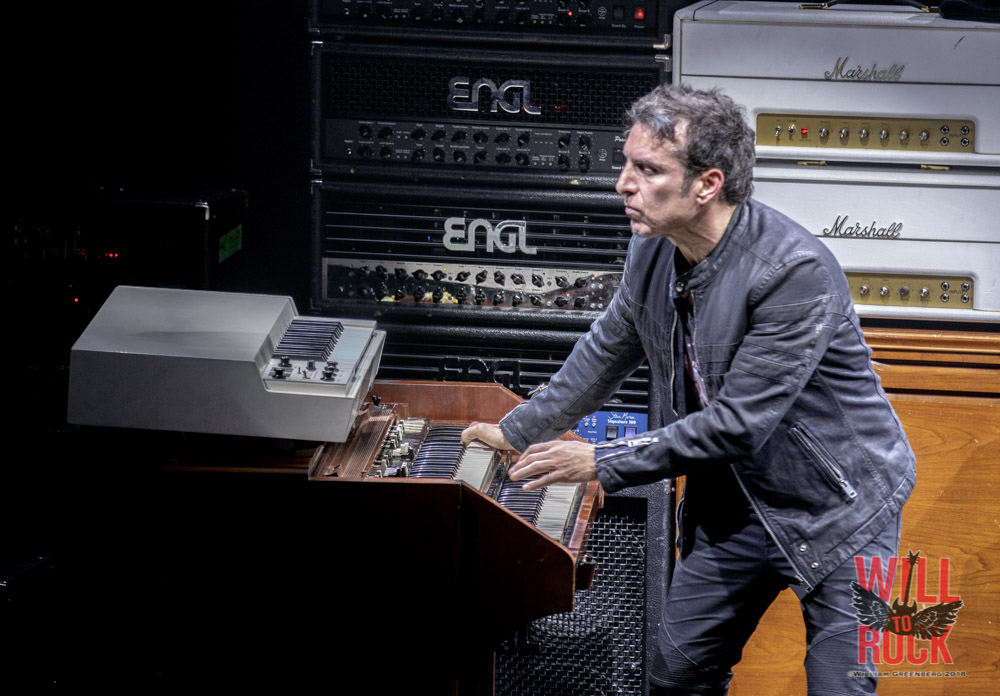 The writing process began at the start of the year, as Portnoy, Sherinian and guitarist Ron “Bumblefoot” Thal got together. “The three of us were at my home studio in Pennsylvania,” explains Portnoy. “And it took about three weeks to get all the music written. That was a very smooth process. The last time, it certainly must have felt a little weird for Bumblefoot to be writing with Derek and me, because we were strangers to him. Now, we know one another better and that helped things push along.”
“Because we all have our home studios, it meant everyone could record there as and when they had opportunity,” continues Sherinian. “We all had the luxury of being able to take our time to get all the parts done, which was a huge help in the way the album’s come out. I suppose in all, it took about eight months to record everything.” 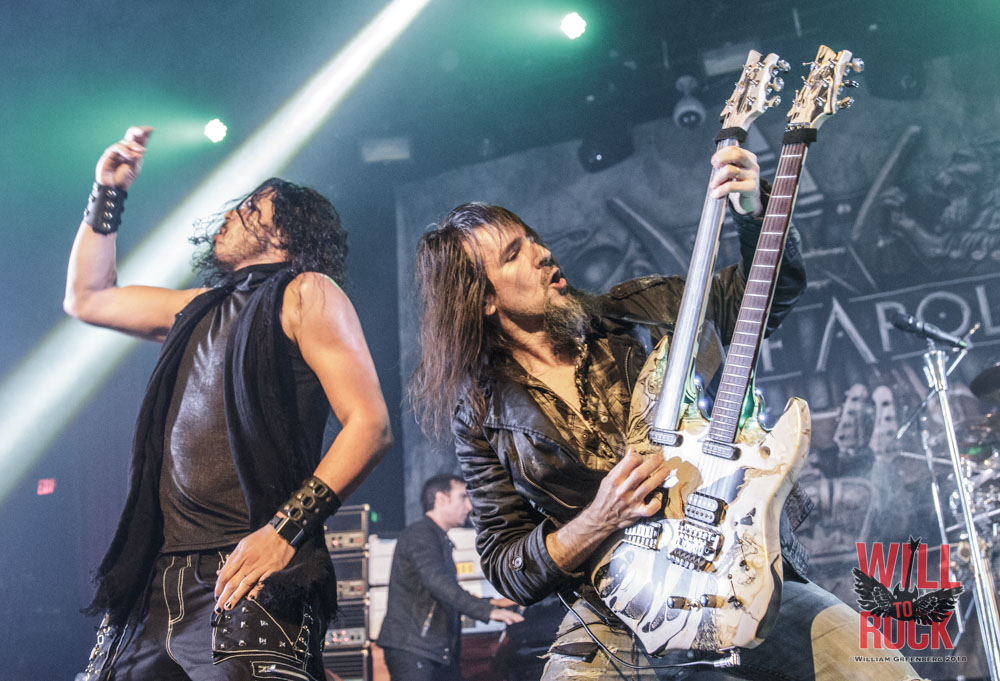 The lyrics were written by Soto, who also came up with the melody lines with input from Sherinian. “While Jeff was left to come up with thewords on his own, as the melody lines are part of the music, it made sense for me to be involved with that part,” says the keyboard player.
There are eight tracks on MMXX, with variations in length totalling 60 minutes. “The final song is ‘New World Today, which is 16 minutes long,” says Portnoy. “This one has elements similar to ‘Opus Maximus’ and ‘Labyrinth’ on the previous album. It has some insane, brilliant instrumental moments, which I am sure the fans will love.”
“We wanted to do something epic here, as we did with ‘Opus Maximus’ last time around,” adds Sherinian. “You have to remember that Mike and I come from Dream Theater, where we never bothered about how long a song was. So, for us doing a 16 minute track is not a problem.”
The album title was inspired by a simple chronological fact. “This will be released in mid-January 2020,” says Portnoy. “That means it will be one of the first releases in what is a new decade. So I came up with the idea of calling it ‘2020,’ except having it written in the Latin form of ‘MMXX’.” And the album’s artwork has been created by Thomas Ewerhard (who was responsible for the cover design of PSYCHOTIC SYMPHONY), which inevitably reflects the title. As Portnoy explains, “For the first record, we had a mythological feel. This time around though, there’s a much more futuristic style to what we’ve got. It has a very 21st century appeal. And the band crest is more polished, cleaned up and a lot more modern than last time, when it had an old fashioned look.”
“Each member of this band has their own signature sound on their instrument,” adds Sherinian. “And when you put all of this together what you get is a wonderful five-headed beast. It makes this a sonically special band, which is definitely what comes across on MMXX. You can hear odd time signatures and amazingly crazy performances here. Overall, we’ve been satisfyingly more adventurous this time than we were before, and I know people are sure to love what we’ve done.” 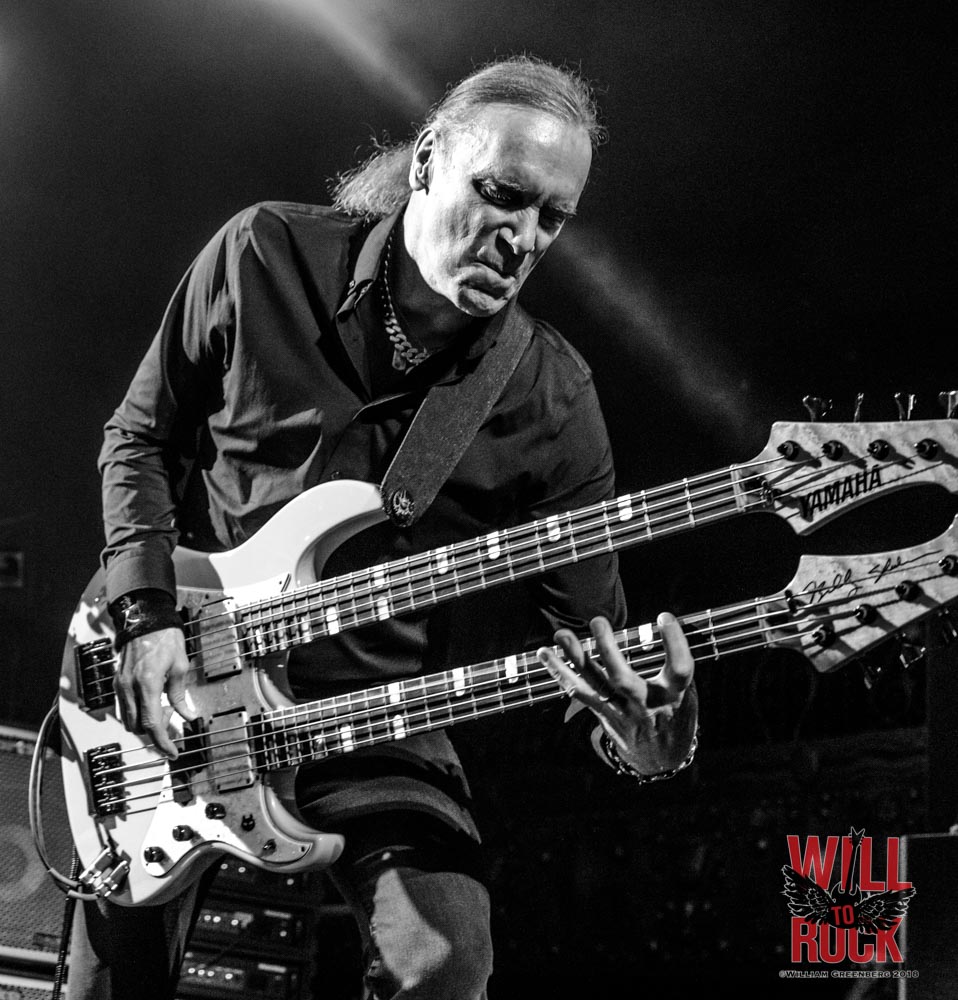 SONS OF APOLLO have certainly enriched the music sphere since their formation in 2017. It says much that the huge talent involved immediately combined with a cohesive and recognizable individual stance on their #1 debut album, PSYCHOTIC SYMPHONY, acknowledged as one of the finest releases in ’17. Praised by Loudwire as an “…impressive debut disc,” it was released October 20, 2017 via InsideOutMusic/Sony. It debuted on Billboard’s “Heatseeker” chart at #1, as well as at #10 on the “Rock Chart,” and #33 on the “Top Current Albums” chart.
PSYCHOTIC SYMPHONY picked up rave reviews upon its release, and got them a nomination at the Progressive Music Awards 2018 for Best International Band:
“Fuck the term ‘supergroup’, that’s not what this is about. SONS OF APOLLO are simply a group that are super.” – Classic Rock
“PSYCHOTIC SYMPHONY is fierce, loud, bewildering, brilliantly performed and monstrously entertaining.” – Prog Magazine
“…PSYCHOTIC SYMPHONY, truly lives and dies by the instrumentation, which by all involved is next level…At first listen you would be remiss not to draw comparisons from previous works of all involved, though SONS OF APOLLO is not defined by past triumphs. Rather, they represent the bridging of common attractions, with the end result being an album that is fresh and daring.” – Outburn
In touring news, the band’s headlining “MMXX World Tour” will launch January 24 in Pomona, CA and will take them around the world throughout the new year. Tickets are on sale now.
Here’s the track listing for MMXX:
1. Goodbye Divinity (7:16)
2. Wither To Black (4:48)
3. Asphyxiation (5:09)
4. Desolate July (6:11)
5. King Of Delusion (8:49)
6. Fall To Ascend (5:07)
7. Resurrection Day (5:51)
8. New World Today (16:38)
Check out SONS OF APOLLO at any of the following stops: 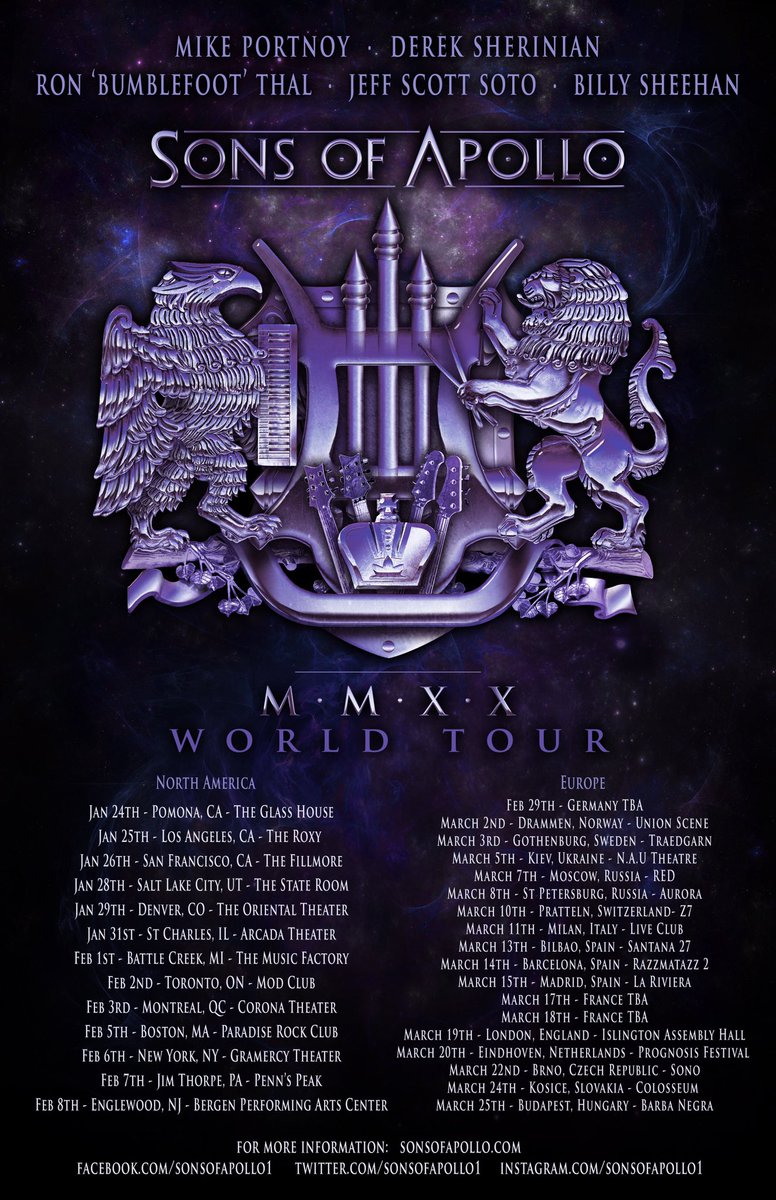 UNLEASH THE ARCHERS w/ Aether Realm and Seven Kingdoms at 1720...