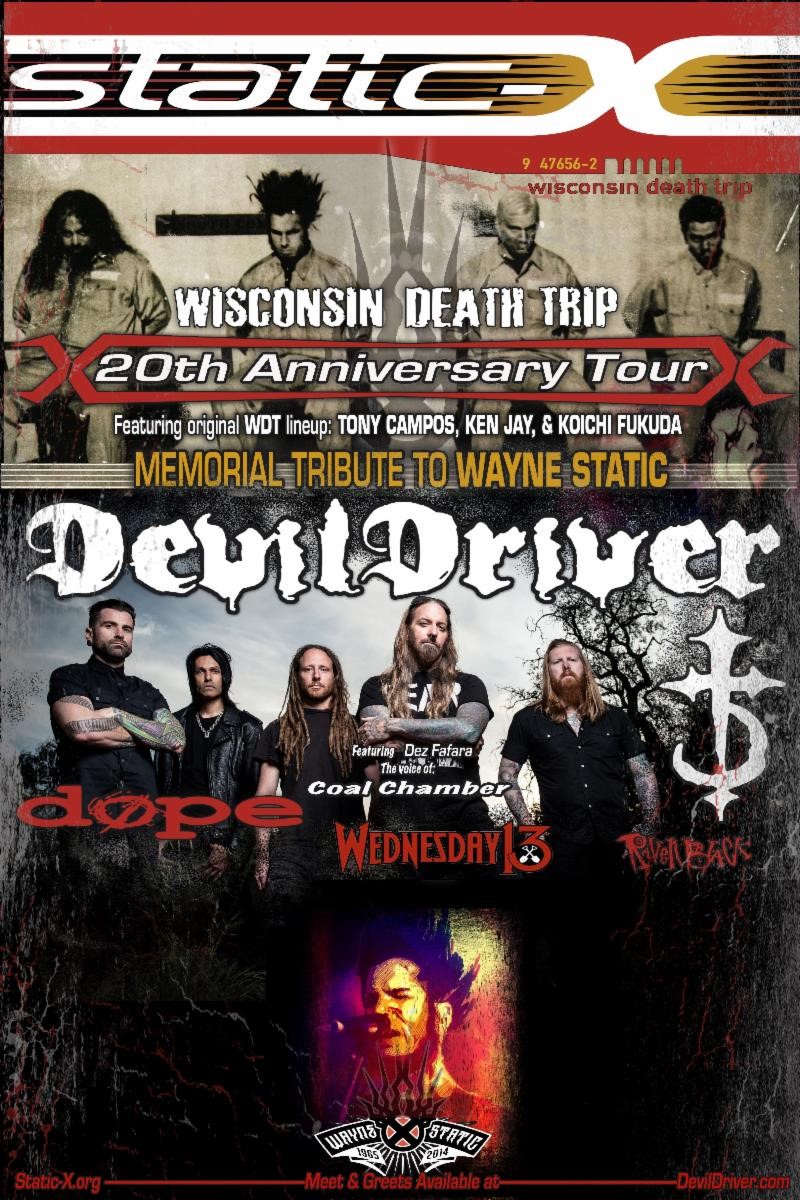 Tickets for this tour are in high demand, and select markets such as Joliet, IL and Pittsburgh, PA have already sold out, so make sure to grab your tickets now before they are gone for good!

Wednesday 13 says, “We are excited to announce that we will be a part of the STATIC-X North American dates. Now, we will be touring all over the world this year with STATIC-X including in Australia, Europe and the UK. Such a great line up – we’re excited to be included on the bill.”

Raven Black adds, “We couldn’t be more excited to be a part of this tribute tour. As long-time fans who grew up listening to STATIC-X, it’s surreal to have this opportunity and be a part of it. It’s also incredibly full circle that our producer and friend Ulrich Wild produced Wisconsin Death Trip.”

July 11 – Indianapolis, IN @ The Citadel

STATIC-X with support from Wednesday 13 and Dope

STATIC-X with Soil, Wednesday 13 and Dope

STATIC-X with Wednesday 13, Soil and Dope

A few weeks ago, STATIC-X dropped a special video in which fans can see and hear the band’s mysterious, unnamed vocalist performing the band’s cult classic, “Bled for Days”, along with the original Wisconsin Death Trip band lineup of Tony Campos, Ken Jay and Koichi Fukuda.The clip also showcases the band’s stage production for their highly-anticipated upcoming US tour, and teases a brand new song from their upcoming album, Project Regeneration. Watch the clip here: https://youtu.be/_340zcRUO5g

STATIC-X is currently in the studio putting the finishing touches on their seventh studio album, entitled Project Regeneration. The album will feature 12 brand new STATIC-X tracks and contains several vocal performances and musical compositions by Wayne Static, along with a handful of high-profile guest vocal contributions.

As announced, the original STATIC-X lineup introduced on their 1999 platinum-selling debut full-length album, Wisconsin Death Trip – bassist Tony Campos, guitarist Koichi Fukuda and drummer Ken Jay – have joined forces once again to release a new album, Project Regeneration. The band has cultivated a treasure chest of vocal performances and musical compositions left behind by Wayne. Along with the help of STATIC-X‘s long-time producer Ulrich Wild, the band is in the process of completing the album now.

A new teaser featuring clips from a brand new music video, as well as five new STATIC-X tracks – “Road To Hell”, “Something Of My Own”, “Terminator Oscillator”, “Hollow” and “Disco Otsego” – along with a personal message from bassist Tony Campos about the inspiration behind Project Regeneration, is available to view now at www.static-x.org.

For the unfinished tracks, the band is inviting several of their friends to lend their voices for the completion of this very personal project. The guest vocalist curation process is being led by none other than SiriusXM programming pioneer Jose Mangin, who is working alongside the band as one of the executive producers for Project Regeneration.

STATIC-X has created a pre-order campaign allowing fans who purchase Project Regenerationin advance to have their name appear in the liner notes of the new album. Additional special pre-order package options are also available, including Project Regeneration merch bundles and several old school STATIC-X merch items to commemorate the 20th anniversary of Wisconsin Death Trip.  Pre-orders are available via www.static-x.org.