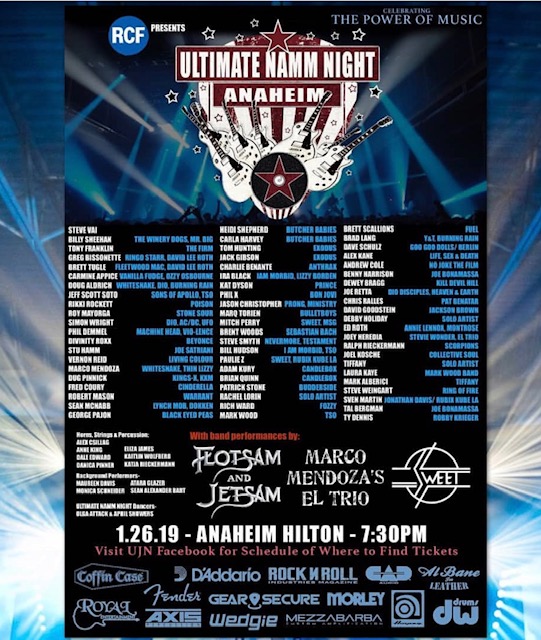 Ultimate Jam Night is now teasing something that almost happened in November of 2015:   The reunion of the David Lee Roth band from the Eat ‘Em And Smile era.  Officially scheduled to appear at the UJN NAMM event at the Anaheim Hilton are Steve Vai, Billy Sheehan, Greg Bisonnette and Brett Tuggle.

For those that don’t remember that ill-fated evening, the EEAS band were scheduled to appear at Ultimate Jam Night with Ralph Saenz (Steel Panther) on vocals. Turns out David himself showed up to complete the reunion, but at the very last minute the Fire Marshall came in and shut down the event due to overcrowding.

Is it finally time for Dave to get the band back together?  I guess you’ll have to show up to see for yourself.  (Official Press Release below)

Over 80 performers will present a show that is dedicated to portraying the power of music and its diverse reach. The event will showcase many different genres of music including Latin, Funk, Rock, and Metal and portray the mission of Ultimate Jam Night – bringing people together through the power of music.

As is its custom the show is offered free-of-charge with tickets available at select times during the NAMM convention, details of which can be found on facebook.com/ultimatejamnight.

Founded in 2015 by Quiet Riot’s Chuck Wright, Ultimate Jam Night is community-oriented event that features live unrehearsed performances by some of music’s greatest talent, charitable-giving, comedic interludes, walk-around characters, and other entertainers. It is presented each week free-of-charge at the famed Whisky A Go Go in Hollywood, California. For more information please visit facebook.com/ultimatejamnight or ultimatejamnight.com.