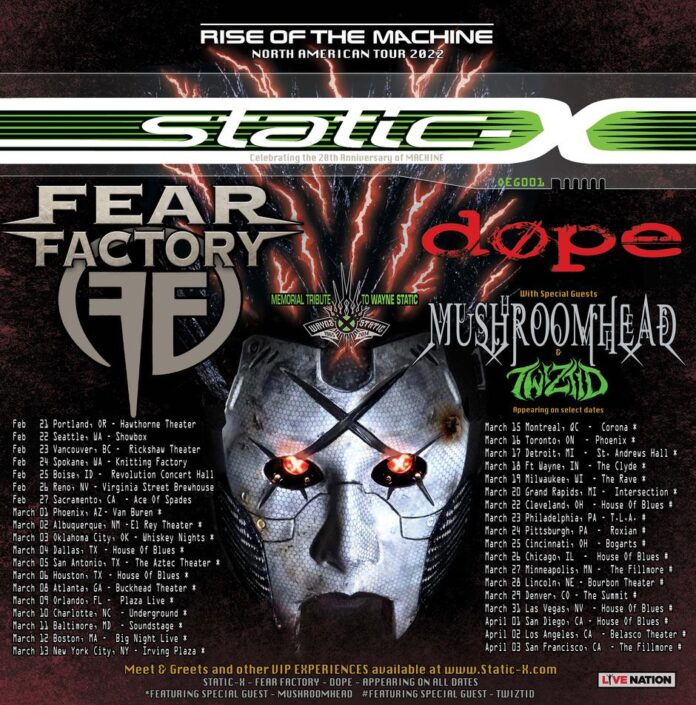 Tour Will Continue Band’s Memorial Tribute To Wayne Static And

Can Be Found At http://www.static-x.com/

New York, NY) Multi-platinum selling industrial music icons Static-X will bring more of their self-proclaimed “Evil Disco” to the masses with their Rise Of The Machine North American Tour 2022.  The 37-date run, produced by Live Nation, kicks off on February 21st in Portland, OR and runs over 5 weeks wrapping up on April 3rd in San Francisco, CA. General tickets go on sale starting Friday, September 17 at 10am LOCAL. .” More information on tickets, meet & greets and other VIP experiences for the Rise Of The Machine tour can be found at: www.Static-X.com.

The tour will celebrate the 20th Anniversary of the band’s RIAA Gold-certified sophomore album Machine which is being re-released next year and will serve as a continuation of their memorial tribute to honor their late singer Wayne Static. Joining the touring Static-X lineup of Tony Campos, Koichi Fukuda, Ken Jay, and Xer0, will be fellow industrial metal pioneers Fear Factory and Dope, along with special guests Mushroomhead and Twiztid (appearing on select dates). The Rise Of The Machine tour will also celebrate career anniversaries for both Fear Factory and Dope with Fear Factory celebrating their 30th anniversary as a band and Dope celebrating the 20th anniversary of their cult metal anthem “Die MF Die.”

“We are so excited to finally get back out on the road. We plan to play most of the songs off of both Machine and Wisconsin Death Trip, as well a number of nice surprises that are being incorporated into the set list. It is going to be awesome to have Fear Factory, Dope, & Mushroomhead back out on the road with us to share in all of this nostalgic insanity. All in all, this package is going to be one for the ages and we can’t wait to get out there and celebrate 20 years of our Machine record, while we continue to remember all of the good times that we had with Wayne and to share it live and loud with all of our fans night after night,” explains Static-X.

“I’m beyond excited to finally turn the Fear Factory machine back on and start crushing stages alongside our longtime friends in Static X,” adds Dino Cazares of Fear Factory.

“We are honored to be part of this tour. Static-X, Fear Factory, & Dope toured together back in 1999.  It was the first time that we all met, and it laid the foundation for all of the tours that Dope and Static have done together.  I can’t wait to get back out there and get crazy with all the fans!” exclaims Edsel Dope.

The 20th anniversary release of Machine – scheduled for February 18, 2022 – features newly remastered audio by Ulrich Wild and features all 12 tracks from the original release, as well as 3 new bonus tracks: “Wisconsin Death Trip (Live 2019 Regeneration featuring Wayne Static),” “Sweat of the Bud (Live 2019 Xer0)” and “I’m With Stupid (Live 2019 Regeneration featuring Wayne Static).” Originally released in 2001, Machine would ultimately turn out to be the last album recorded by the 4 original members of Static-X.  All of the lead vocals and guitars on Machine were performed by Wayne Static, while bass, backing vocals, drums, and programming contributions came from founding members Tony Campos, Ken Jay, & Koichi Fukuda. The limited-edition release will have packaging featuring fully reimagined artwork and will be available in multiple configurations including multiple color vinyl sequenced on 2 discs, with an etching of the Static-X Shock symbol on side D. Machine 20th anniversary is now available for pre-order at: www.Static-X.com. 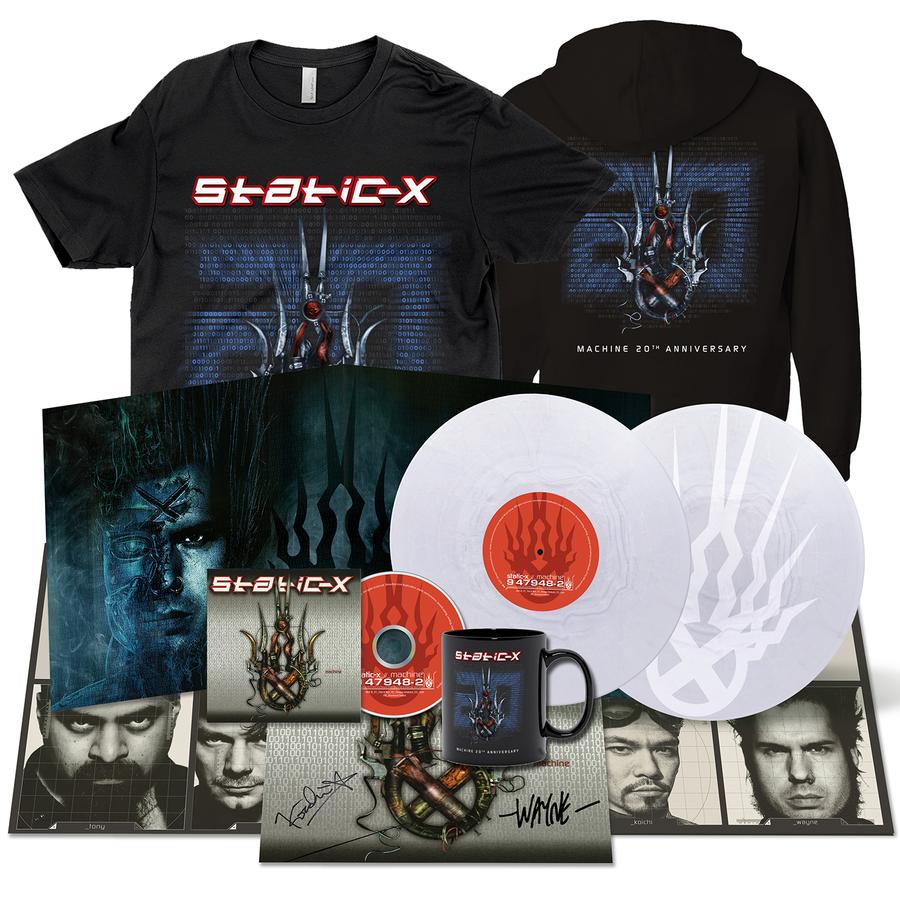 ^ Not a Live Nation Date

News: Tesla’s BRIAN WHEAT Tells His Side of the Story in...