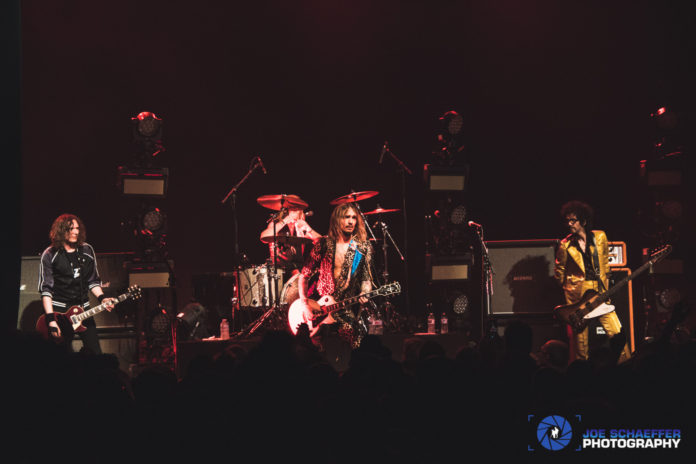 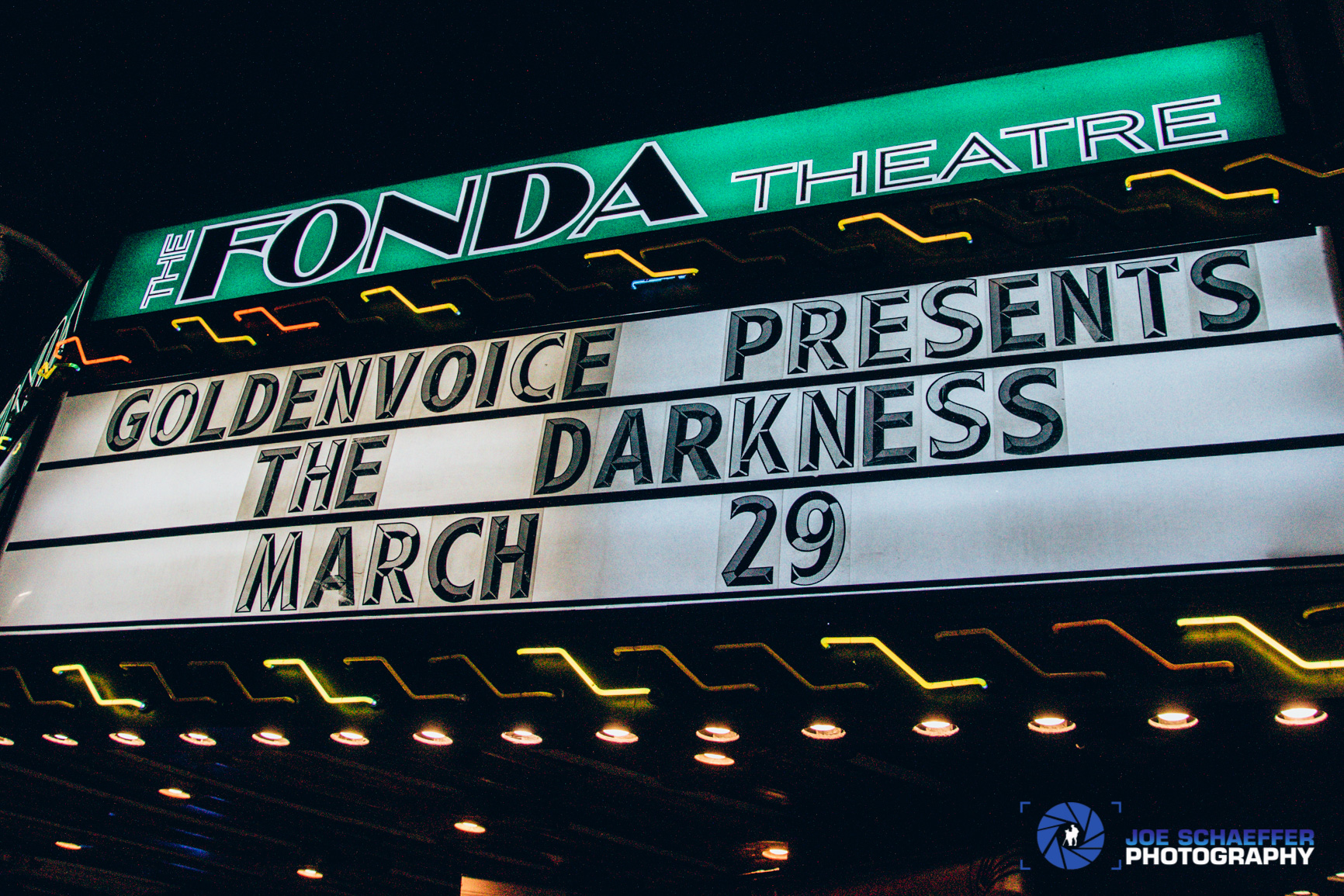 One thing that can be said about British rockers The Darkness, is that they are definitely a band on a mission. That mission is simple…these lads want to bring back fun and chaos to Rock N’ Roll. Their performance at The Fonda Theatre captured both. 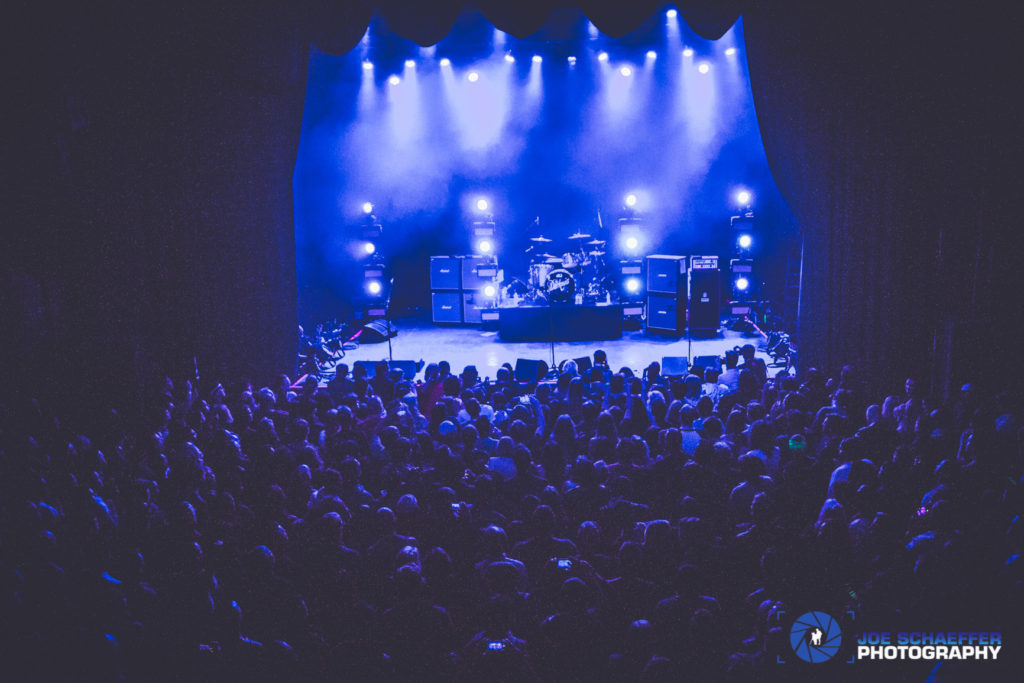 I first became aware of the Darkness in 2003 when their video for “I Believe in a Thing Called Love” gained heavy rotation on American television. At first I was a bit perplexed with the band’s seventies glam image, the high wailing falsetto vocals and their overtly campy posturing. This led me to question if the band was merely a parody of an age gone by or were they a hundred percent serious? Their debut album “Permission to Land” became an international hit after constant touring and they followed up their success with “One Way Ticket to Hell” in 2005. It was then that I became a devoted fan. Unfortunately the band split up the following year due to personal and health issues. Thankfully, the original members reunited in 2011 and have released three albums since then.

Marching on to the stage at the Fonda Theatre in Los Angeles, The Darkness delivered a blistering ninety minute set which featured material predominantly from their debut album and their current release “Pinewood Smile”. 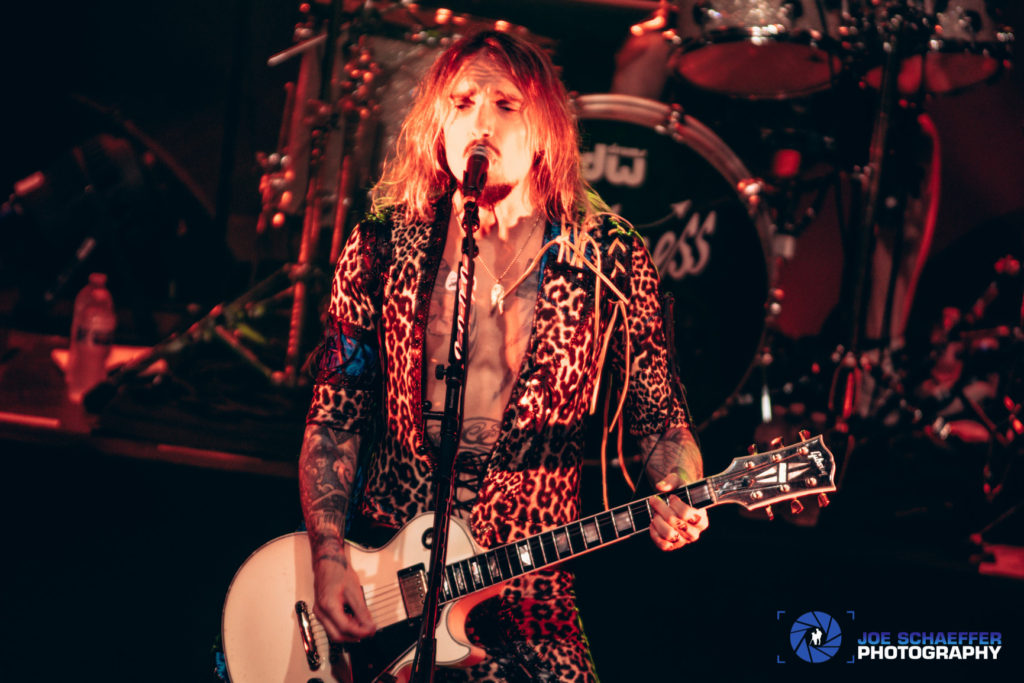 The frenzied crowd were definitely there to see the band and have a good time. Opening with “Open Fire” from their fourth album, Justin Hawkins took complete control of the stage. Hawkins is a natural and experienced front man who commands attention and respect from the audience and immediately establishes a rapport with the crowd and treats everyone as though they were merely sitting in at a band rehearsal. Along with his brother Dan on guitar, bassist Frankie Poullain and drummer Rufus Taylor, the four members perform at a high level without the aid of backing musicians or tapes. These guys are a real Rock N’ Roll band. 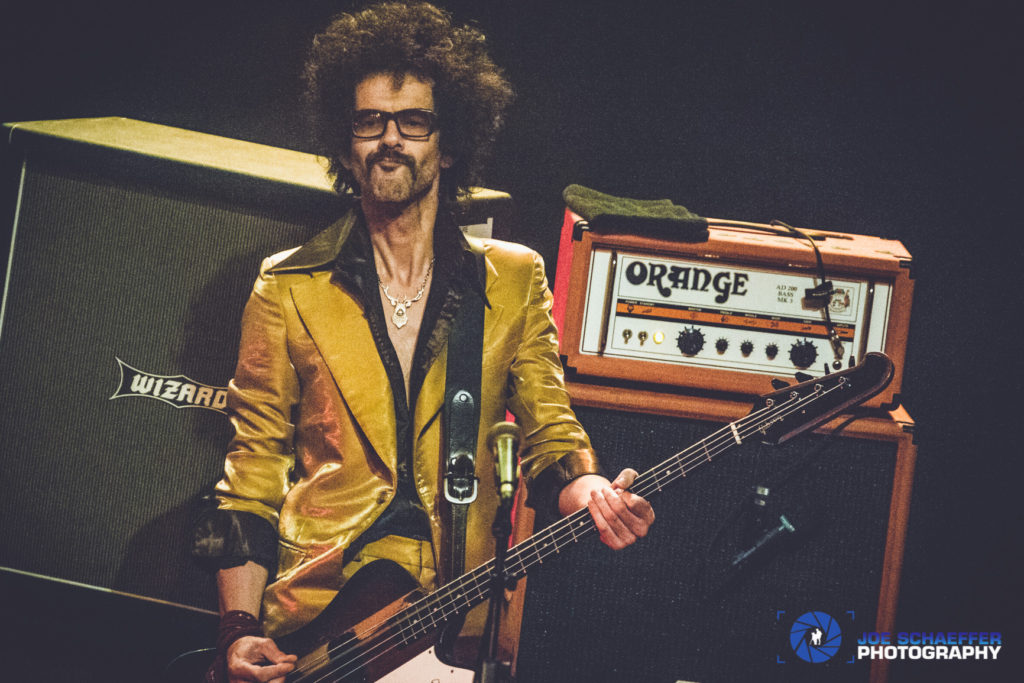 I must admit as a lifelong Queen fan, I am a bit biased towards this band at the addition of young Taylor playing drums (son of the legendary Roger Taylor) He maintains an amazing  energy and stamina throughout the performance. 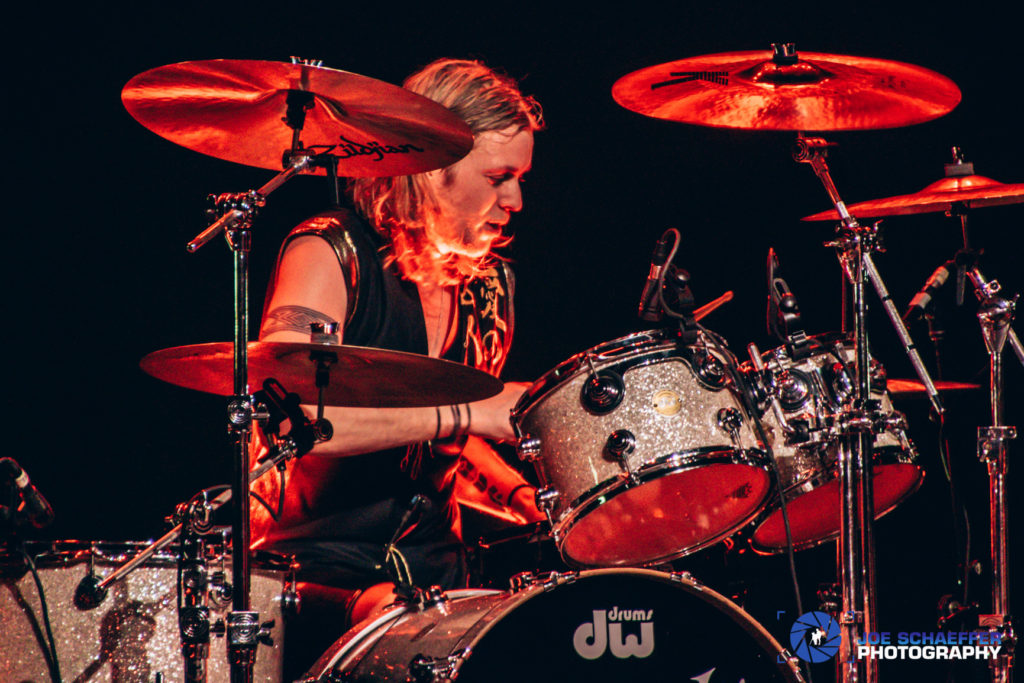 Highlights included “One Way Ticket,” “Barbarian,” “Solid Gold,” “Black Shuck,” and my current favorite, “All the Pretty Girls.” The band closed the show with three selections from their debut album, “Stuck in a Rut,” “Get Your Hands off My Woman” and “Growing on Me“. Encores included “Japanese Prisoner of Love” and the much anticipated “I Believe in a Thing Called Love“. The song has definitely become a staple and the band’s anthem. It was a bit amusing to hear the audience take control of the vocals while Hawkins merely strummed the chords lightly on his guitar while most of the crowd sang in a high falsetto range that could have shattered glass. 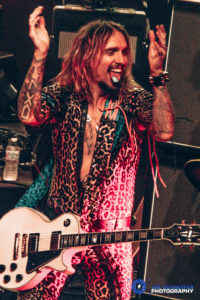 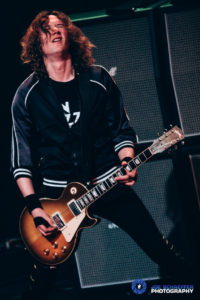 The Darkness are definitely one of the constant touring bands out there keeping the hard rock genre alive. They crossover enough to attract fans ranging from teens to baby boomers. A popular thread amongst other contemporary bands like the Struts, Vintage Trouble and Greta Van Fleet.

Judging from the response of the LA crowd, those fans have an undying affection for the band’s debut album which was released over fifteen years ago. Baffling?…No, that’s just the power and influence of Rock N’ Roll. If it’s good, there’s no expiration date!

Love Is Only a Feeling

All the Pretty Girls

Every Inch of You

Stuck in a Rut

Get Your Hands Off My Woman

I Believe in a Thing Called Love 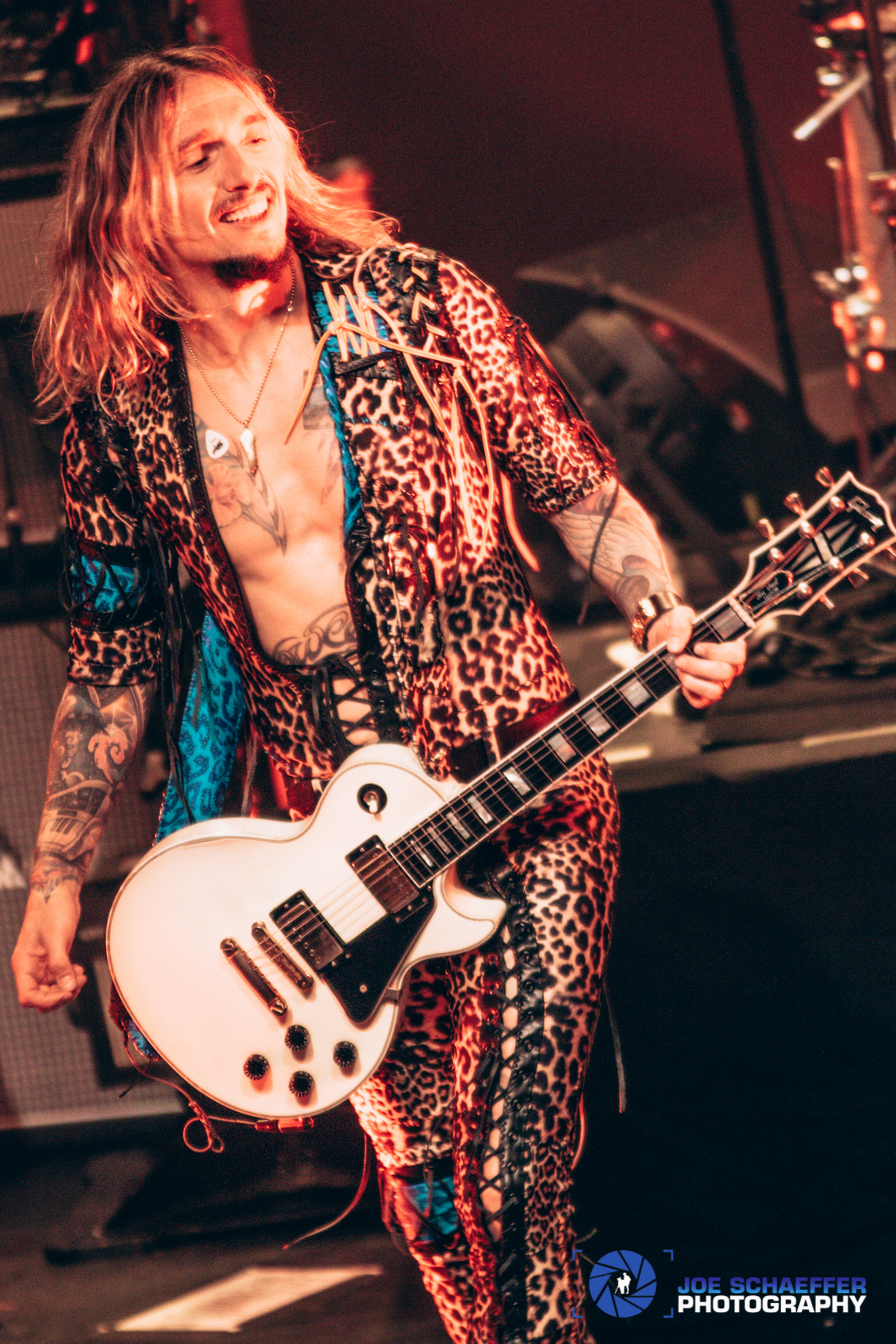 The complete album of photos can be found here: