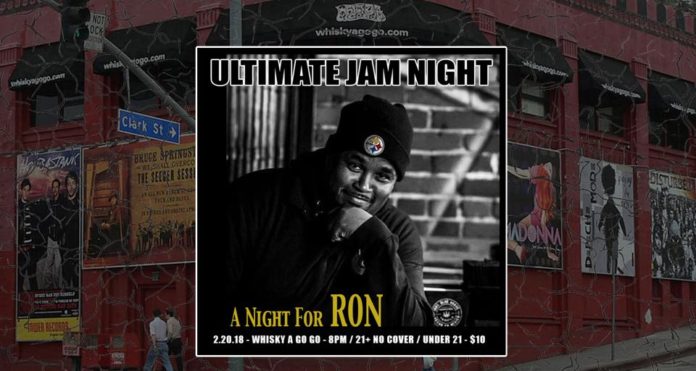 (Los Angeles, California) Ultimate Jam Night, the long-running community-oriented music program in residence at the Whisky A Go Go announced a benefit show on Tuesday, February 20, 2018 for Ronald Broadnax, a long-time member of the Whisky A Go Go security staff. Doors open at 8 pm. Contributions can be made directly to www.gofundme.com/ronbroadnaxmemorialfund .  All funds received will go to his family to aid in funeral and other expenses.

Broadnax, well-known and loved in the live music business, was shot and killed in front of his home on February 14, 2018. The homicide was a result of being in the wrong place at the wrong time as Broadnax was an unintended victim. The death has shocked the music industry.

Known for his ability to make everyone from the very famous to the ordinary feel at ease, Broadnax often worked the Whisky A Go Go back-stage area. There, he was responsible for safeguarding some of the most prominent names in the music business.

A program featuring both local and national artists that Broadnax admired will be presented. A complete list of performers is continuing to be assembled. Updates will be made right until showtime and listed at www.facebook.com/ultimatejamnight.

ROB ZOMBIE says “Shake Your Ass and Smoke Your Grass”. ...