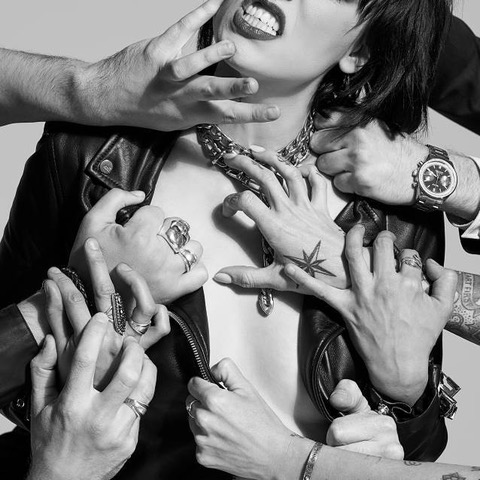 Halestorm is set to release their fourth studio album, “Vicious”, on Atlantic Records on Friday July 27, 2018.  Halestorm is Lzzy Hale (vocals, guitar), Joe Hottinger (guitar, vocals), Josh Smith (bass, vocals) and Arejay Hale (drums, vocals).  Using Lzzy’s own lyrics from their first single Uncomfortable to describe this album, “break every preconceived notion that you have”, as this record is like nothing you have ever heard from them before.  This is all thanks to raw and uncompromised vocals, serious musical chops, lyrics fueled by anger, passion and love, as well as, outstanding production by Nick Raskulinecz.

I have been a huge fan of Halestorm since before their Atlantic debut in 2009. By all accounts, Halestorm is best listened to in a live setting, their energy is infectious.  With that being said, this album, “Vicious” is a knockout; it has a completely different sound than any record they have released.  This record is clearly Halestorm, but amplified and fueled by rawness that has not been captured on a recording until now. “Vicious” literally sounds like you are in the front row of their concert.  Their producer, Nick Raskulinecz, who had seen them live multiple times, set out to harness the energy from their live show into a record, and he did just that.

Their first single “Uncomfortable” was sparked by many online conversations about, of all things, Lzzy’s short haircut.  Some people were literally enraged that she cut off her hair and every time anyone asked why she said because she wanted to.  These conversations made Lzzy realize that just being herself made people uncomfortable.  This song is fast paced, with rapid fire vocals, shredding guitar riffs and probably Arejay’s most unique beats.  This song is rapidly climbing up the active rock charts and this week reached number 6.

There are three hard rocking tracks on this album that have blown me away.  First, the title track “Vicious”.  This song is filled with buzzy guitar riffs, smoky vocals, and a hook that turns into an instant earworm. The second track to grab my attention was “White Dress”.  This song has Lzzy embracing her dark side and living outside of the white-picket fence, despite what may have been envisioned for her.  She is determined to show she doesn’t need to fit in order to make people proud, that breaking the mold is ok.  This song is true rock and roll with heavy hitting drums and a tight bassline.  The hidden gem of this album is “Killing Ourselves to Live”.  This song is one that touches on some of life’s harsh realities, the pain that people face and how we are all literally killing ourselves to live. It opens with a simple riff that leads into what is possibly Lzzy’s best vocal performance to date.  This song is an anthem and the chorus is huge.  Lzzy’s vocals during the bridge are so passionate, you can literally feel every word, emphasized by Joe’s blazing fast solo.  This song will undoubtedly be on repeat for days on end.

“Vicious”, unlike their previous two releases, does not contain a piano ballad, but fans…  do not panic.  “Heart of Novocaine” and “The Silence” will fulfill your needs in a big way.  “Heart of Novocaine” is about gaining strength through pain. This song has vulnerable lyrics, which are backed by an acoustic guitar and powerful, vocal harmonies.  Lzzy is using a lot of guttural vocals throughout this album, if I didn’t know any better I would have thought that this song was recorded live.  “The Silence” is possibly my favorite on the album.  This song leaves Lzzy in a place that I never thought would see the light of day on an album.  Lzzy’s love is off limits, it’s the only thing she never really exposes.  The vocals are so raw and passionate, the first time I heard the song, I was literally brought to tears.  If you wanted a little glimpse of Lzzy’s love story, she’s put it out in the most beautiful way.

The one track that Lzzy has been dropping the most hints on is, “Do Not Disturb”. This track is bluesy and based on a true rendezvous. Joe had said in an interview that the song would leave you with a funny feeling. For me, I was actually hoping for a little more lyrically than what the song actually presents.  None the less, I believe it will be a fan favorite.

I will leave the other songs for you to discover on your own. I believe that this is Halestorm’s best album to date, it is fresh and different, but will not betray longtime fans. “Vicious” will be in my rotation for a long time to come and I hope that the rest of the Halestorm  fans, or Freaks as they are commonly referred to, will enjoy the album as much as I do.

7. Killing Ourselves to Live