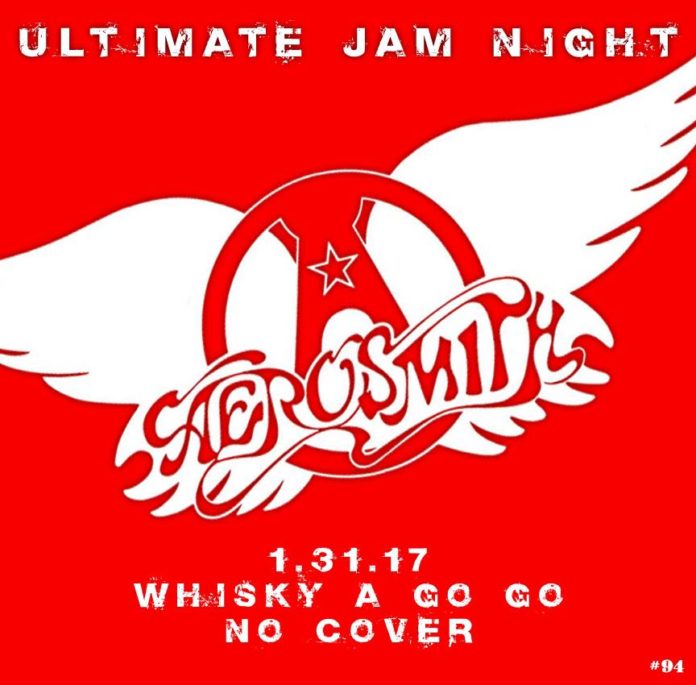 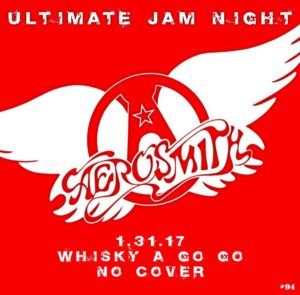 “Oh Hell Yeah!! This past Tuesday at The Ultimate Jam, Capt’n Chuck Wright & Co. closed out January with an extremely heavy dose of in-your-face, no bullshit, good time Rock and Roll by paying tribute to one of America’s most iconic and enduring acts ever to grab you by the throat!

I’m talking, of course, about none other than Boston’s finest: The one and only Aerosmith! That’s right, baby! Almost five freakin’ decades worth of classic Aerosmith power tunes were pounded out this week before a packed house at The World Famous Whisky A Go-Go; really and truly the one and only club on the Sunset Strip that’s actually worthy of America’s Greatest Rock & Roll Band.

Needing a break from all the political discussions that seem to have taken over everybody’s lives, I needed nothing less than a good, hard, LOUD injection of disorderly conduct to distract me from it all. And that’s just what I got. The Ultimate Jam Night proved to be just the right punch to make everything in the world go the hell away; well, at least for the next few hours. And what a fantastic few hours they were!

Young Royals jump-started the night just right with a heavy hand of sonic sounds that honestly sent shivers down my spine. It took all of five seconds for me to be hypnotically entranced by Eric Bradley’s stunning vocal virtuosity and Johnny Blade’s ferociously forceful hammer licks. By the time these Aces, along with bassist Shannon Bizzy and Drummer Ryan Brown, wrapped up their set with a chilling rendition of The Beatles classic “A Day in the Life”, the crowd was salivating. Yes, the troubles of the world were starting to disappear and I for one was ready for more Rock.

And more is what came next when special guest Tracii Guns (L.A. Guns) and everyone’s favorite MC, Paulie Z, rolled out on stage to round out The Ultimate Jam Night’s famous house band starring its faithful regulars Capt’n Chuck Wright (Quiet Riot, Alice Cooper), Matt Starr (Mr. Big), and Walter Ino (Survivor). (Mitch Perry sat out this week). The boys wasted no time at all ripping into a ferocious rendition of ”Toys In The Attic’ with abandon that pretty much kicked the audience square in the ass.

And, it was all non-stop from there, as an exchange of power players took turns at the helm bashing out well covered and lightning infused versions of ‘Adam’s Apple”, ‘Nobody’s Fault’, ‘Seasons of Wither’, ‘Jaded’, ‘Lick and a Promise’, ‘Eat the Rich’, and more… All perfectly lined up to bring the first half of the night to a feverish crescendo. Now was just the time for Paulie Z to call the dazzling Debby Holiday (Rod Stewart) and Jimmy Burkard (Billy Idol) to the famous stage; two names that anyone familiar with the Ultimate Jam Night will always associate with unadulterated, crowd-pleasing perfection.

At the sound of Holiday’s name, everyone in the room knew deep down and without a doubt that they were about to be taken to the highest level known to mankind. Nothing short of a dream could have transported them closer to paradise then to imbibe Holiday’s scintillating vocals as they slowly made love to Burkard and Ino’s lofty guitar licks. Well a dream is what they got, as Holiday, Burkard, and Ino, along with Wright, Starr, Koi Anunta on violin, and Matthew Jordan on keys intoxicated this packed house with ‘Dream On‘. And NOT the studio version, I might add. No, THIS was the live bootleg version, which is only about ten times as transcendent as the original classic. When the music stopped you could hear pins drop. It was quite simply beautiful.

From this point on, it was all back to carelessness and craze with some of Aerosmith’s later classics, including a righteous version of ‘Walk this Way‘, A tune that has the nostalgic distinction of being on the first record that I ever purchased with my own money when I was thirteen years old. Yeah, my future was looking bright. Needless to say, the memories came flooding back last Tuesday, and that’s exactly what a good Jam is supposed to do; make us forget about whatever is on our backs so we can get some much needed refuge from our day-to-day toil in the trenches.

This night would not have been complete without the seductive sounds of singer Cherokee Fortune. If her voice had been any hotter this night, the Whisky would have burned to ashes. Simply intoxicating.

The Ultimate Jam Night is a perfect mid-week stress reliever. Believe me, most of us need it these days more than ever. And where else in the world can you see some of Rock and Roll’s most notorious, high-caliber legends play live and totally unrehearsed? Check it out every Tuesday night at the World Famous Whisky A Go-Go, 8901 Sunset Boulevard, West Hollywood, California. Admission is always free, but ask at the door about how you can tip your favorite performers. Doors at 8:30PM. Peace.”