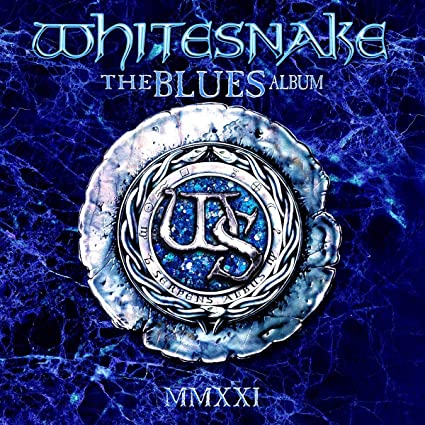 Whitesnake’s third album in the Red, White and Blue trilogy represents the hugely popular Blues Rock aspect of the Snakes. This includes re-mixes and updated songs originally featured on albums ranging from 1982’s ‘Saints and Sinners’ till 2011’s ‘Forevermore’ (including songs that were first released on ‘Restless Heart’ and  ‘Into the Light’, both originally David Coverdale solo albums.)

Kicking off with ‘Steal Your Heart Away’, we have rollicking, heavy, bouncing riffs with a mighty swaying rear end. ‘Good to Be Bad’ also from the Doug Aldrich era seems to have been slightly adjusted so you can hear the rounder tone of DC’s vocals making the track more Blues orientated and less metal than the original.

Whitesnake – “Steal Your Heart Away”

‘Give Me All Your Love’ has been clarified so that John Sykes’ can be better appreciated, no longer just a string of squeaks and a blur of lightning fast notes, you can hear what he is playing.

‘Take Me Back Again’ with its dramatic emotion filled vocals now has additional contributions from Joel Hoekstra on guitar and Derek Sheninian on Keyboards, notably at the end. Titanic anthem ‘Slow and Easy’ has also been … ahem ..slightly interfered with (sorry, Whitesnake double entendres are just too hard to resist). Or rather as Coverdale put it, “tweaked to make things interesting”. ‘Too Many Tears’ (also on ‘Love Songs‘, but a different version) has an even more of a melancholic start, additionally the organ, guitar and drums have been altered and are more prominent – overall it’s flattering to the flow of the song which is slower and less predictable than the original.

Huge tune ‘Lay Down Your Love’ has a less harmonized, less echoey vocal at start and the guitar solos have had ‘the treatment’ as DC puts it.  ‘The River Song’ already incredibly bluesy in its original incarnation has been given more warmth in the vocal. I won’t spoil the complete surprise of the addition to the beginning of ‘Whipping Boy Blues’ but trust me you won’t miss it There’s also a new voice and harmonica interlude and with it being cleaned up, everything can be heard better in the mix.

Whitesnake – “Lay Down Your Love”

‘If You Want Me’ is fairly faithful to the immense ‘Live in the Shadow of the Blues’ version with a few additions to the vocals. ‘A Fool in Love’ having lost the ‘Again’ from the title as it originally appeared on ‘Good To Be Bad’ is essentially the musical bad boy it always was although it’s easier to hear all the lyrics.  Stormin’ track ‘Woman Trouble Blues’ has added guitar and at the end some new trippy Hammond Organ effects. ‘Looking for Love’, an exquisite track from ‘1987‘ has stratospheric John Sykes solos which can be now be heard more distinctly. A stormy new intro now features on the epic ‘Crying in the Rain’ which also has added keyboards and altered riffs. The vocals have been tinkered with towards the end and the song now finishes with a new echo effect.

Coverdale has the laudable ambition of revisiting as much of his existing work as possible to update and get it to the quality of modern production levels. Should the opportunity arise to do it for older work, where the recordings are not yet at his disposal, he will no doubt grasp it. For now we can enjoy what he can get to and since he’s obviously having the most amount of fun possible doing it, it would be positively and utterly rude not to! For me it’s the heavenly mix of the big riffs, heady emotions and that voice which is utterly irreplaceable. New versions maybe. Iconic songs always.