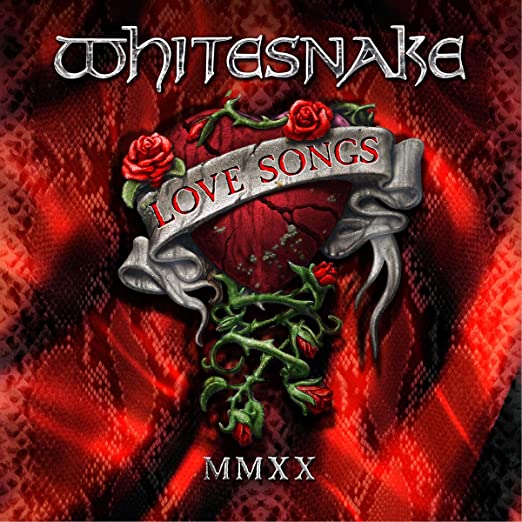 This is the second Whitesnake album in the Red, White and Blue series; this one devoted to love and all things to do with the heart. (The first white one, ‘The Rock Album’ having been released earlier this year)

Now arguably all things Whitesnake are to do with the heart. In my view, David Coverdale is the premiere rock singer with the ability to truly feel; communicate those feelings; and make an audience feel the same way. The love song is the ideal medium for exactly that.

Out of the fifteen songs on the album there are three unreleased tracks ‘With All My Heart’ (a romantic ballad Elvis would be proud of), ‘Yours For The Asking’ (a rockier upbeat, lighthearted song with a touch of Eastern promise) and ‘Let’s Talk it Over’ (a bluesy seventies style track particularly showcasing the famous Coverdale tone), all originally recorded for his solo album, ‘Into The Light’.

Otherwise the tracks are selected from the Whitesnake albums from “1987” like the iconic ‘Is This Love’ (which is kept quite true to the original for those who couldn’t bear to see it altered) up to 2011’s excellent ‘Forevermore’ album. It contains a lot of lesser known tracks across that period so that it may seem like an entirely new album to the casual Whitesnake listener.

Remixed and Remastered, Coverdale’s mantra has always been if something is worth doing it’s worth doing well – and he never disappoints. As such, even if you are already entirely familiar with all the released tracks on the album you can expect a lot of bright shiny new versions of your favourites. With additional guitar and keyboards added which were never even on the old versions of tracks like ‘The Deeper The Love’ and ‘Too Many Tears’ these are new performances, as well as new mixes. Just by way of some examples, ‘Love Will Set you Free’ has a striking new acapella start and there are new enhanced backing vocals on ‘Summer Rain’ and ‘Don’t You Cry’ while ‘Your Precious Love’ is less gospel sounding than the original.

I love all things Whitesnake and David Coverdale and even if you thought you love the blues or rock aspects of Whitesnake more, it only stands to reason that your significant other would love to receive ‘Love Songs’ as a present, but I for one, am not giving mine away.