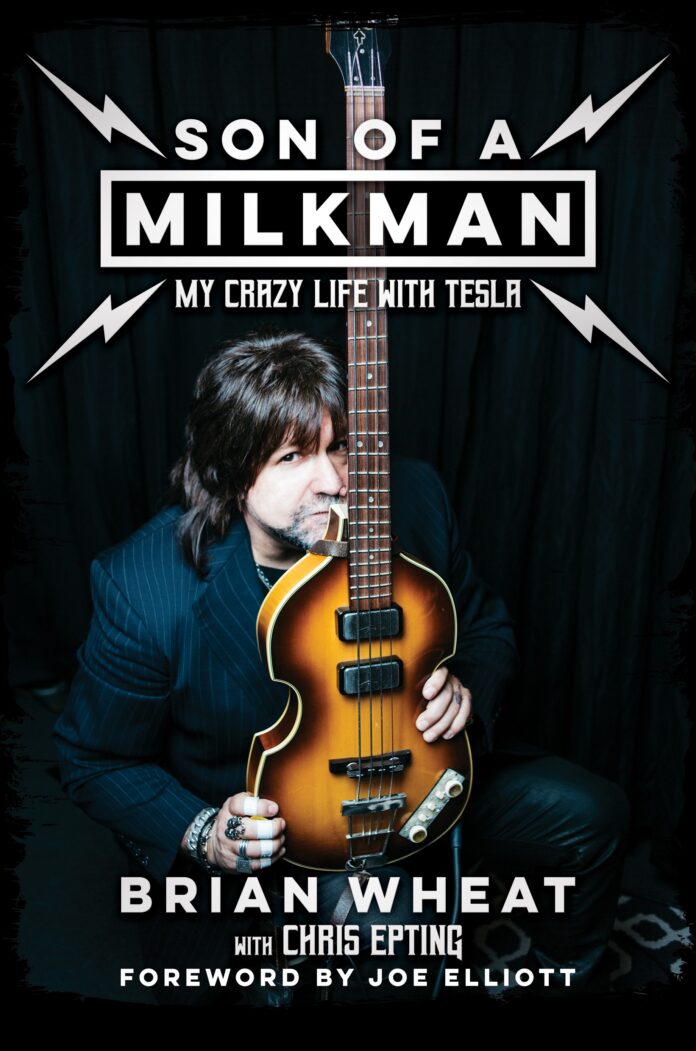 Brian Wheat – “Son Of A Milkman: My Crazy Life With Tesla”

“Literally. You’ve heard the term “son of a milkman,” based

on the old joke that way back when, when the husband was at work,

the wife would fool around with the milkman and end up pregnant?

Well, that’s me. I have lived that joke since day one.”

Hang Tight (Tough?!) with me on this one…  This will be my first Book review (outside of anything that was assigned to me as homework during my younger years).  I wasn’t necessarily sold on writing a review of the book (of ANY book!) because I’ve started so many that unless I’m hooked right away, I’m out.  But Brian Wheat’s first book is written, and I don’t mean this in a bad way at all, with such “Simplicity” (that might be a pun) that I found the pages just flying by.  The book starts in 1962 and ends in the age of the Coronavirus, so this is literally a “Hot Off The Presses” release.

“There have been times when

I thought about ending it all, but I fight back because I believe in

myself, and I believe in working hard.”

Let’s be honest, I read the book because I’m a Tesla fan and I wanted to get a little bit of insight into the workings of a (should be bigger than they are) band as well as some of the process that went into all those classic Tesla albums.  I got what I wanted and so much more. For the casual reader who may not be a Tesla fan, there’s enough drama that involves personal relationships and basically the circumstances of an interesting life to keep one’s interest.

“I thought he sucked, but Frank was next to him and could hear his singing. He said, “This guy’s got a great voice,” so we hired him.

Of course there’s the band stuff, from “City Kidd” to “Tesla” to his side band, “Soulmotor”.  Brian starts, as most “memoirs” do, with his humble beginnings. How being the “bastard” son of a milkman forged him into the man he would become (for better or worse).  Brian talks frankly about his mental struggles as well living with severe anxiety and the pain of colitis; How it seems that most of his relationships begin with a certain amount of conflict yet he somehow ends up to reconcile them;  The bet that lead to the MTV “Unplugged” phenomenon; and as with a lot of bands, how success and drugs almost destroyed them (and him).

“So, I call up the band’s dealer, who got the coke for everyone in

Tesla except for me. He used to keep away from me because he knew

I snapped, “Well I do now so bring me a fuckin’ eight ball!””

These are just a few out of many stories that Brian is able to tell in relatively short, sharp bursts of chapters.  The book starts with a foreward by Def Leppard’s Joe Elliott.  Who if you know anything about Tesla, understand that DL have been a constant presence and great influence in the history of the band.  It closes with an afterword by legendary photographer, Ross Halfin who confirms the story that he basically thought Tesla were a bunch of idiots when he first met them.

After reading this book and thinking about it… His book is much like his band, Tesla; No frills.  It’s straight forward and tells it like it is.  Like Tesla, there’s no huge production or extravagant lightshow and fireworks.  It’s in your face Rock ‘n Roll storytelling and because of that, it’s really Highly Recommended.

MAMMOTH WVH: The Rescheduled Friends and Family Show – The Whisky...