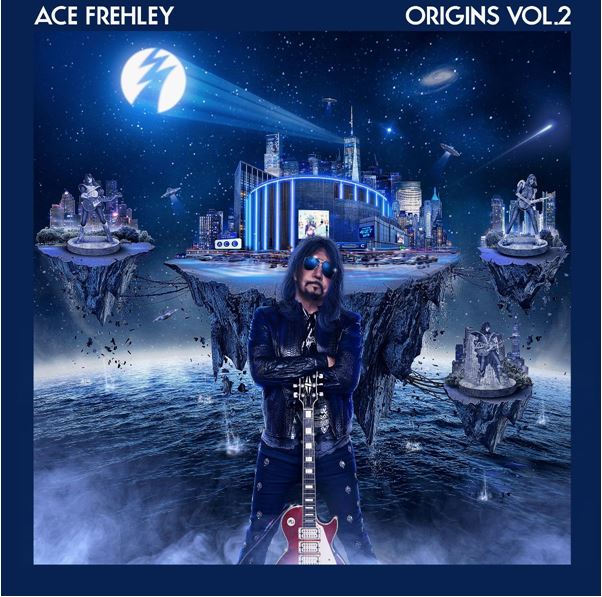 Following on from Origins Vol. 1, Ace Frehley has again revisited songs from the heroes that influenced him in his youth and given them his own special spin on the aptly titled, Origins, Vol. 2. Determined not to overthink it he began the project not knowing what all the songs would be. The album retains the excitement of that spontaneity and involves many very special guests to create an album I found to be a joy from start to finish.

Led Zep are not an easy band to cover or an easy act to follow, but kicking off with a great version of ‘Good Times Bad Times’ Ace peppers it with his own special sauce and you should watch out for extra lyrics at the end… A thinly veiled attack on those that have wronged him in the past – he can’t resist a little private giggle in anything he does.

A blistering version of Mountain’s ‘Never Again’ follows with the self referential ‘bolt of lightning’ lyrics from the Japanese album insert. Also very appropriate for the Space Man character is Deep Purple’s ‘Space Truckin’ which sounds like it was meant to have always been performed this way with that slightly nasally, alien sounding vocal and technical effects that make the Hammond organ sound quite ‘Close Encounters..’.

Lita Ford contributes a great vocal for ‘Jumpin Jack Flash’ which benefits greatly from the hard rock treatment. Ace’s dystopian sleazier version of ‘Politician’ pisses all over the Cream version in my view, and even when you bear in mind, as he modestly admitted, that he has access to far better technology, the results are momentous and truly, truly worthwhile. “Politician” also features a cross faded guitar solo from John 5 (Rob Zombie) who also contributes a solo to ‘I’m Down’ from the Beatles Rock n Roll early period.

Robin Zander of Cheap Trick is the guest vocalist on Humble Pie’s ’30 Days in The Hole’ giving it a whisky laden rock n roll touch. Bruce Kulick (KISS) contributes an extended wild-style solo on Hendrix’s ‘Manic Depression’. Not forgetting his current touring band Ace got them to do a fine version of the bonus track, ‘She’, the only former KISS track on the album.

I don’t remember the last time I had a cover songs album in my favourite albums of the year, let alone in my top five. When I came to compile my list for the end of 2020 I found this album so unforgettable that it’s my fourth most favourite album of the year behind the two Whitesnake (The Rock Album Review & Love Songs Review) and Queen albums (both lifelong passions of mine). Such a high ranking says something about the quality of this album. Covers albums are often regarded as ‘fluff’. Regard this one as, rather, quintessential.