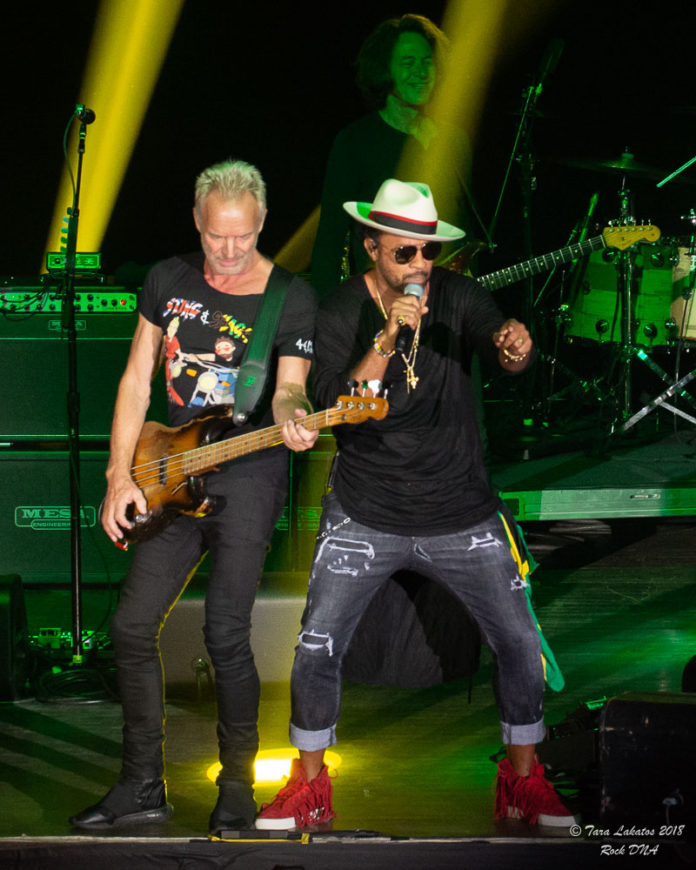 The Sting and Shaggy 44/876 Tour bounced its way into Philadelphia’s Fillmore on September 20, 2018.  The thought of this tour would make most people scratch their head including myself, but it was a sonic dream.  This tour is supporting their collaborative release “44/876” which pays homage to their respective telephone country codes; UK +44 and Jamaica +876.   This concert was filmed for NHK Japan, which is Japan’s largest broadcasting organization. 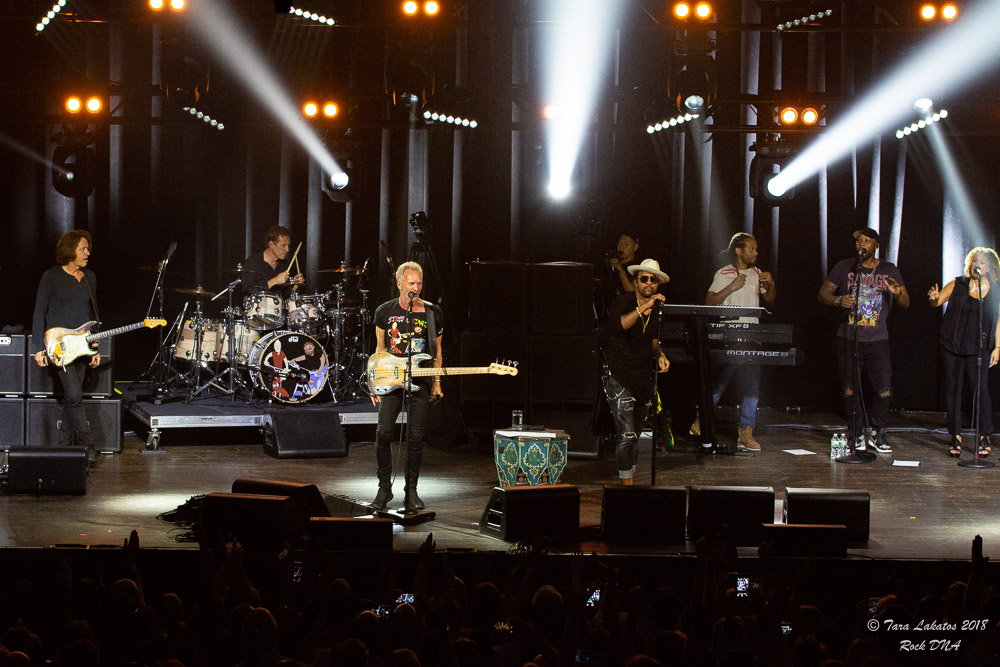 Sting and Shaggy performed a 26-song set that was a mix of songs from “44/876”, The Police, Sting solo and Shaggy.  They opened the set with Sting’s “Englishmen in New York” from his 1987 release “…Nothing Like the Sun”.  If you were wondering how this show would mesh together, the first song literally set the tone for the evening.  “Englishmen in New York” has a reggae beat, horns and island flair; it also hits on jazz flavors as well.  Sting’s voice was impeccable, it was just as good as it was in the early 80’s.  Shaggy joined in the choruses blending himself perfectly in with Sting.

Then they hit on two songs from “44/876”, the title track and “Morning is Coming”.  “44/876”, is a reggae toned song with Shaggy and Sting singing back and forth.  It’s all about the love of Jamaica, the love of the music and the people.  The song displays genuine respect between the two artists and their styles of music.  “Morning is Coming” starts with Sting singing the first verse; the horn section was strong on this song, giving it a more Ska feel.  This song is a light-hearted, feel good song about starting your day, making the most of every moment and uplifting mankind.  There’s something about these island infused jams that just make you want to dance and enjoy the evening. 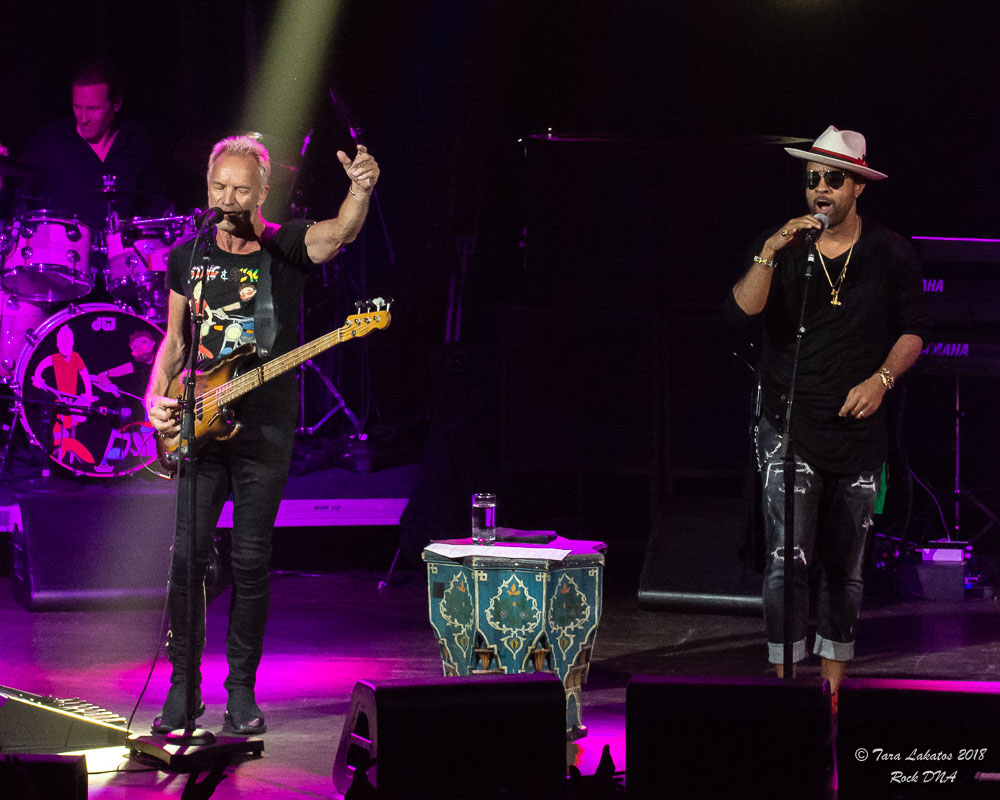 Sting hit on several Police tracks during the set including “Every Little Thing She Does is Magic”, “Message in a Bottle” and “Roxanne”.  These songs are all iconic and Sting brought them back to life, like they had been recorded yesterday.  I remember watching MTV in the early 80’s when it first hit the airwaves; the video for “Roxanne” is one of the first videos I remember waiting for to come on.  On this night “Roxanne” was the last song before the encore and it was combined with Shaggy’s hit “Boombastic” to make a rocking reggae medley.  Sting knocked out the first part of the song then Shaggy came in, Mr. Lover Lover… the two songs while in two totally different musical realms blended together with ease, the “Roxanne” back beat tied the songs together and Shaggy’s smooth tone really is gold to the ears. 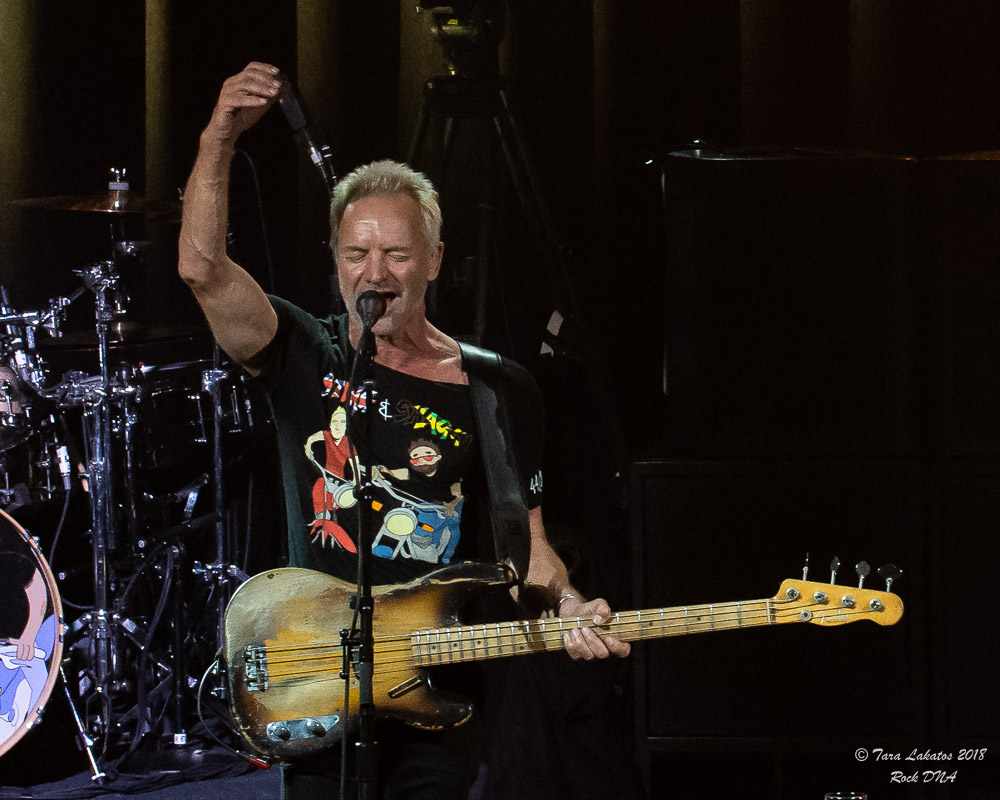 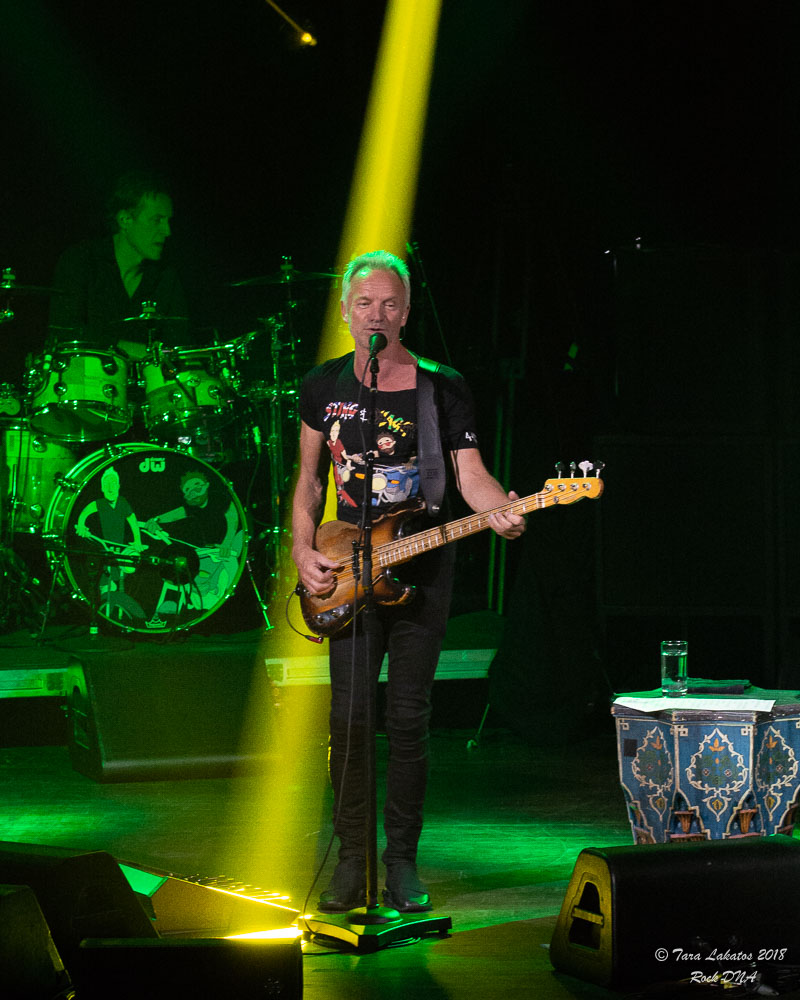 Sting also performed several of his solo songs including; “Fields of Gold”, “If you Love Somebody Set Them Free” and “Desert Rose”, with both artists performing each song with such enthusiasm.  It was something else to see these two mesh together, in some ways it was like this project was always meant to happen.  Shaggy also had several of his own songs highlighted throughout the set including, “Angel”, “Habibi”, and his cheeky song “It Wasn’t Me”.  Admittedly I hadn’t heard any of these songs in years but I will tell you that Shaggy makes you fall in love with his music. 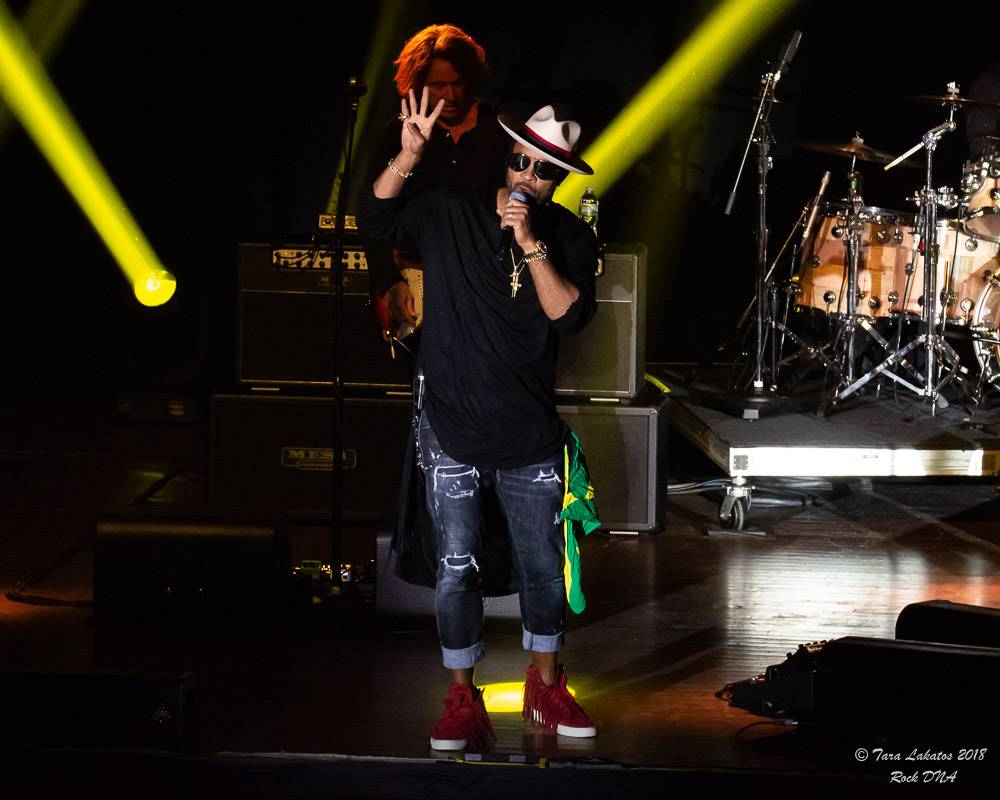 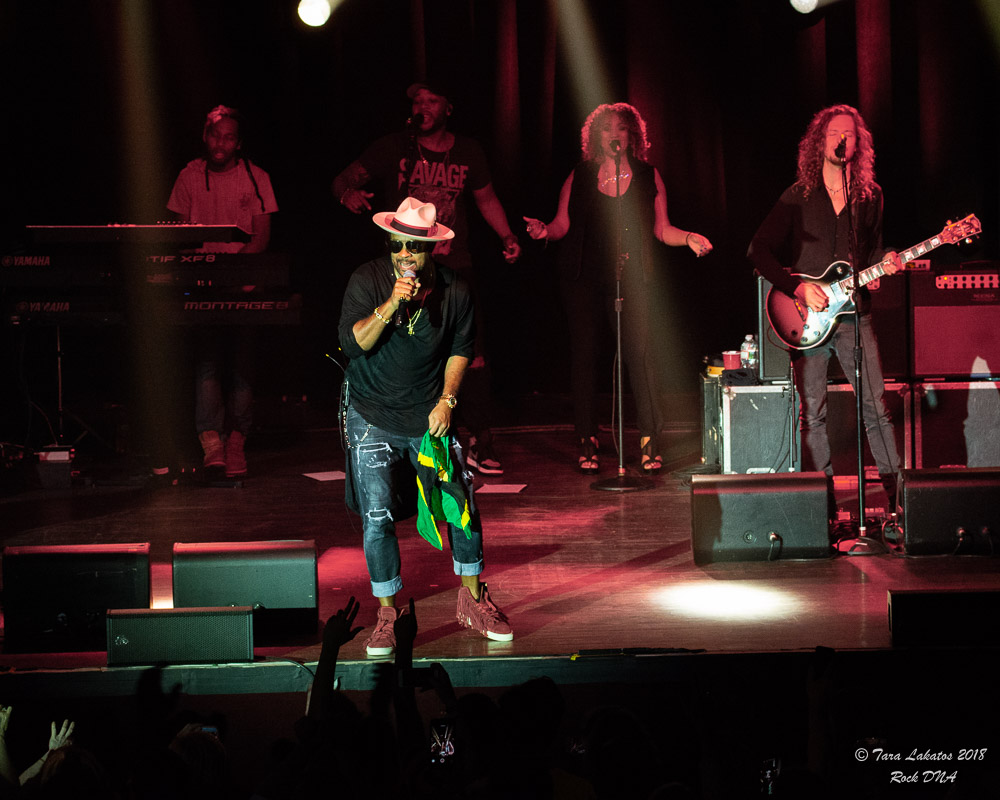 Although each artist got to highlight their personal accomplishments, much of the night was spent performing songs from their collaborative effort.  One of my favorites was “Dreaming in the USA”, while performing the song Shaggy engaged the crowd by telling everyone that no matter who you are or where you are from, that we are in the life together and that we should spend the night celebrating.  This song was uplifting as I saw a very diverse crowd come together and raise their hands up in unity. 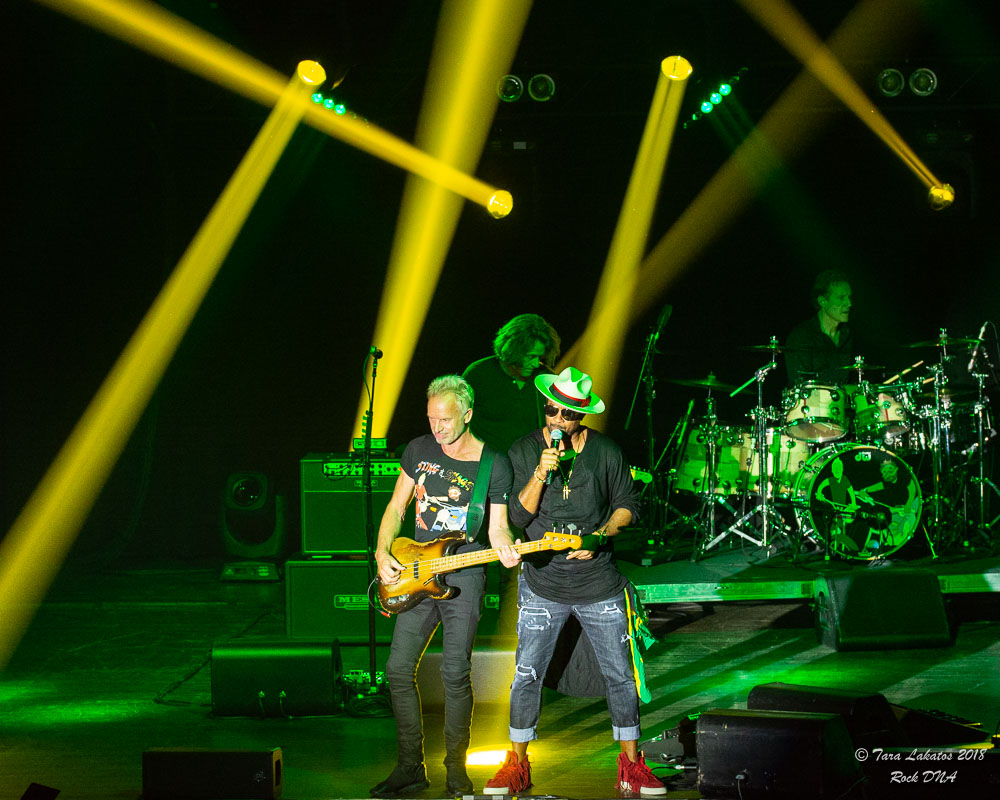 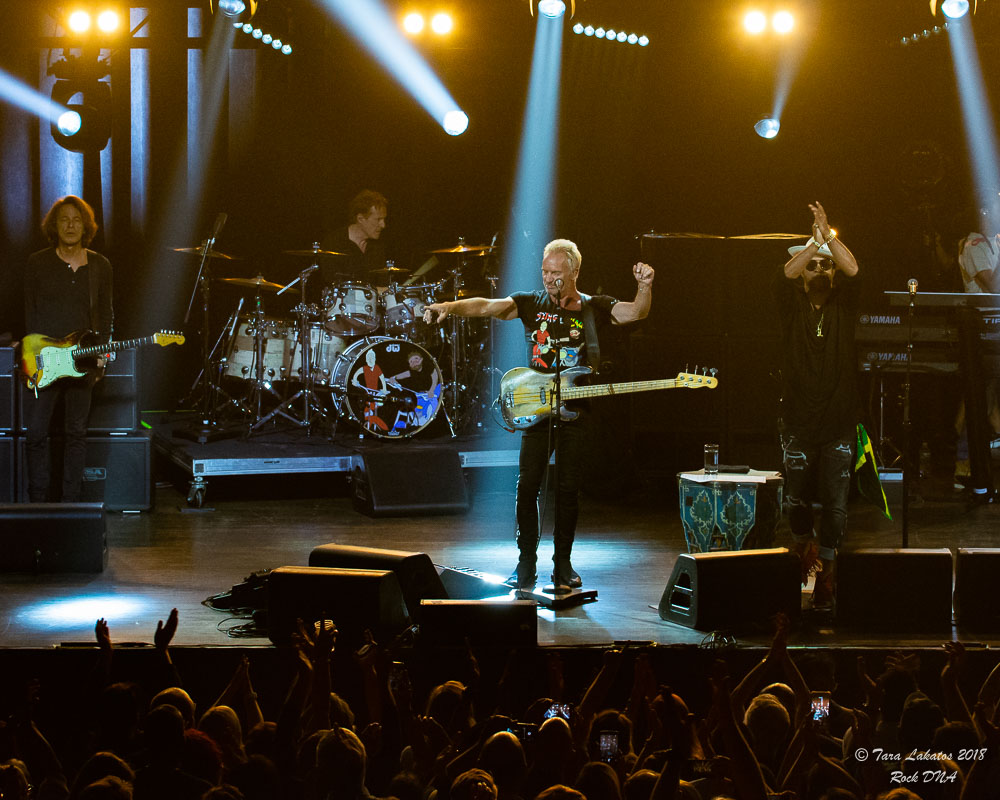 All I have left to say is that this unexpected pairing of Sting and Shaggy was one of the very best concerts that I have been to.  Each artist hit a homerun with their solo material and meshed two diverse worlds into one for their collaborative album “44/876”.  This tour is currently moving westward and is a must see if they are in your area.  They have dates through mid October in Missouri, Arizona and California.