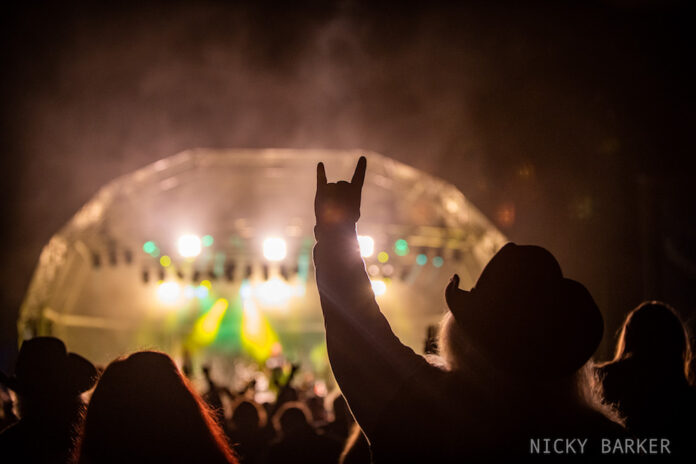 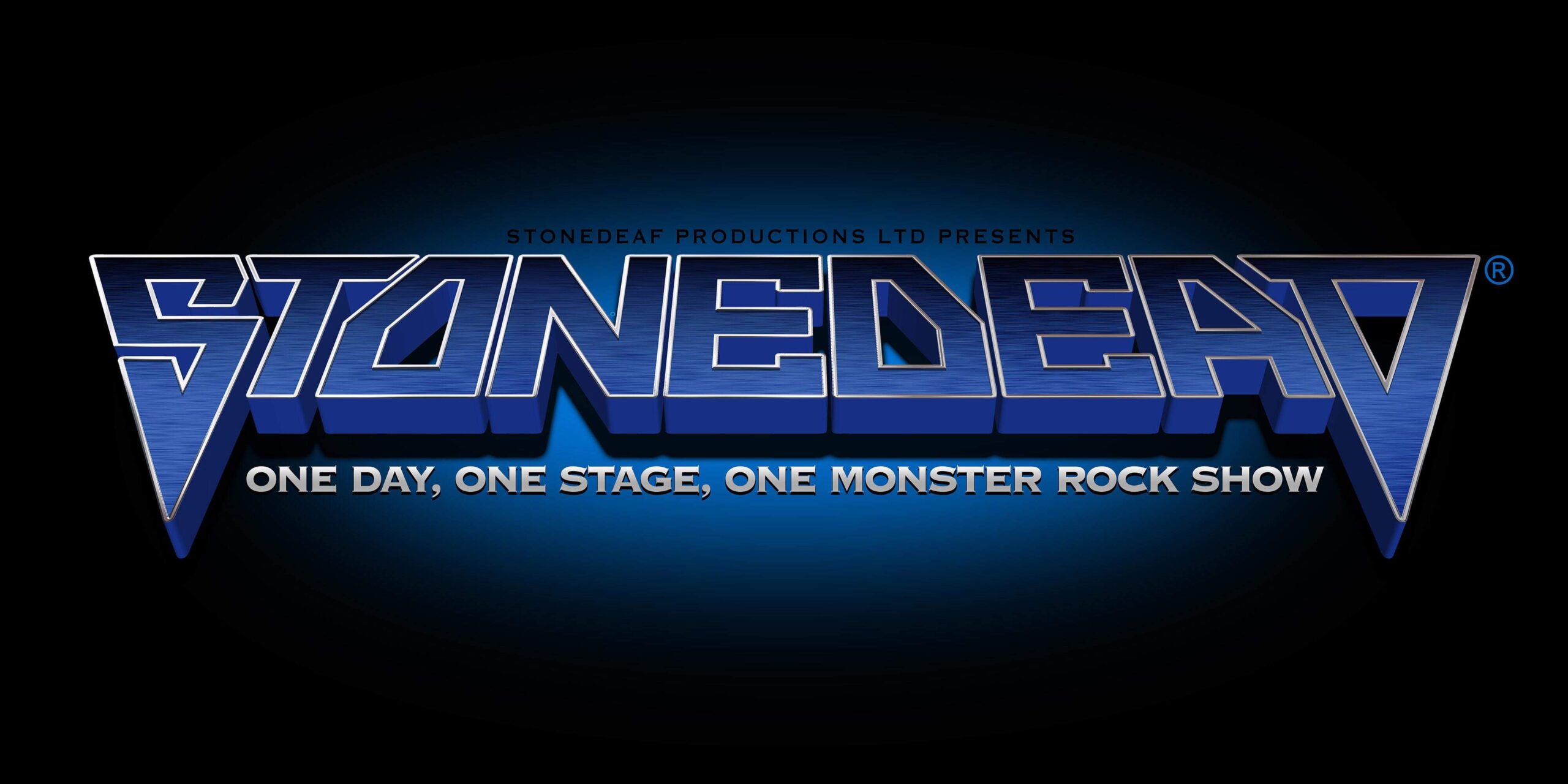 At only 3 years old Stonedead Festival is still in its infancy, but it is rapidly becoming one of the must see/go to festivals on the rock festival calendar.

Formed in 2018 by some Monsters of Rock “DONINGTON” veterans as a festival for the fans by the fans, Stonedead was originally named Stonedeaf, until it was realized there was actually a guitar amp company of the same name.  So, in 2019 Stonedeaf was rebranded to Stonedead.

Stonedead 2020 sold out quite early on, but then the unthinkable happened and the world was brought to a halt by a pandemic.  Stonedead 2020, along with everything else, was postponed until 2021.

Stonedead is really only for one day but the weekend campers are treated to a Friday night rock show.  This year there were 4 bands on the bill.  The Hot Damn, Stop Stop, Cats in Space and headliners, Wayward Sons. 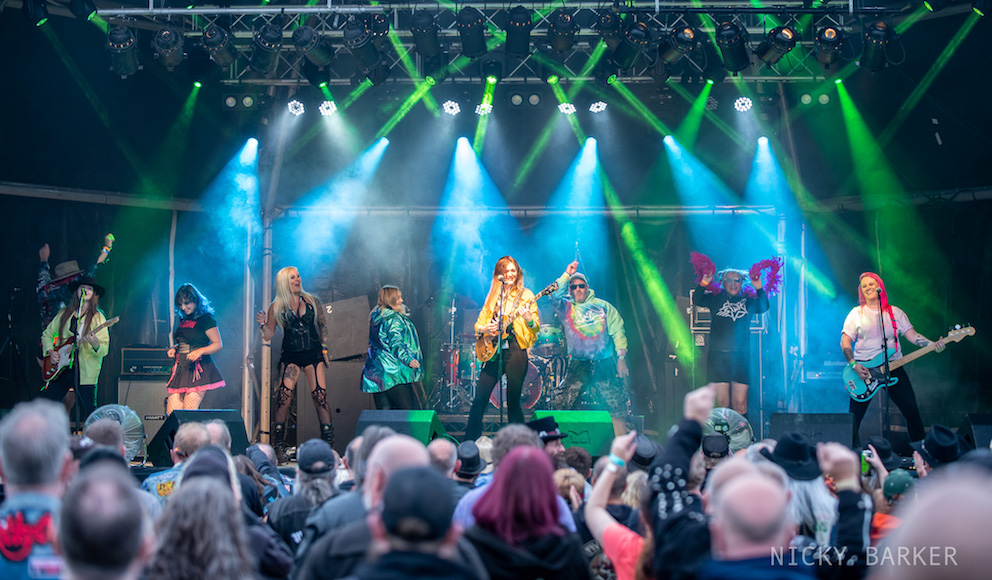 The all-female quartet opened up the show on Friday night.  They are a newly formed band, but are no strangers to the stage.  Gill Montgomery (vocals and guitar) was previously in The Amorettes and drummer Josie o’ Toole is ex Tequila Mockingbyrd. 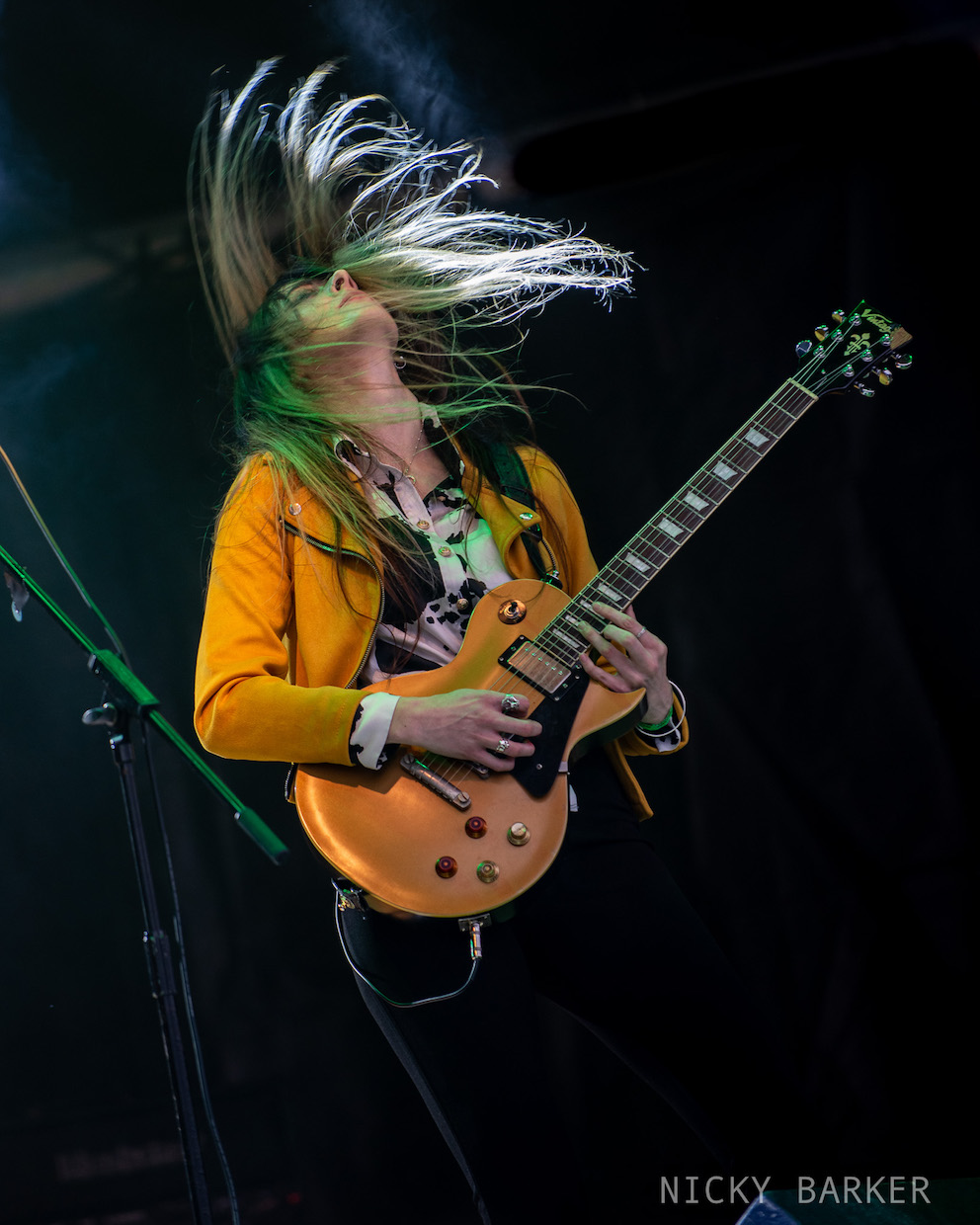 Hot Damn hit the stage hard with a heavy guitar sound and vibrant look.  These ladies already seem to have a growing fan base as quite a few fans were stood at the front wearing their Hot Damn tie-dye t-shirts.  They definitely kicked off the Friday night party, and had dancers join them on stage when they played their debut single ‘Dance Around’.  The band got a great reception from the crowd, and certainly set the bar high for the rest of the weekend. 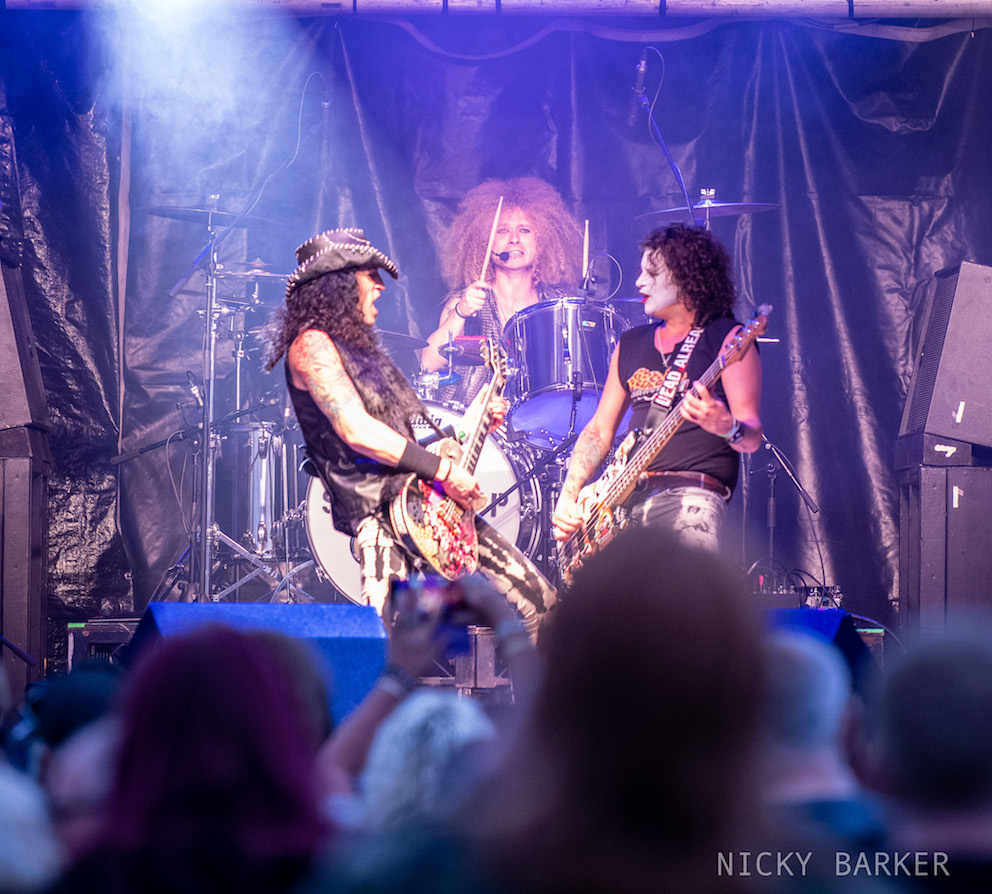 Next up were 3-piece band, Stop Stop.  Pooling their savings to buy a van, the trio moved to the UK from Barcelona after becoming frustrated with the Spanish music scene.  They are Jacob A.M (lead vocals/bass), Vega (guitar) and Danny Spasov (drums).  As soon as they came on stage, I knew they were going to be a fun band. 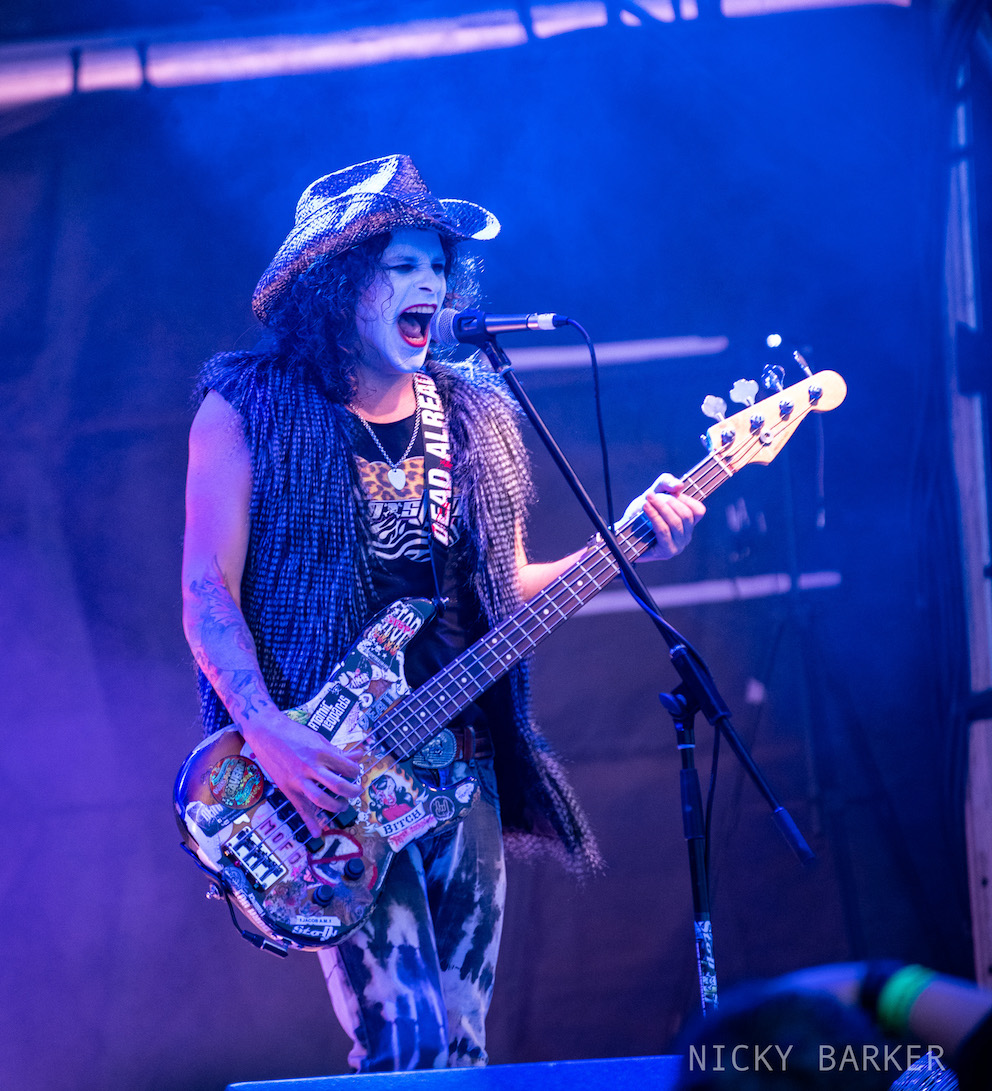 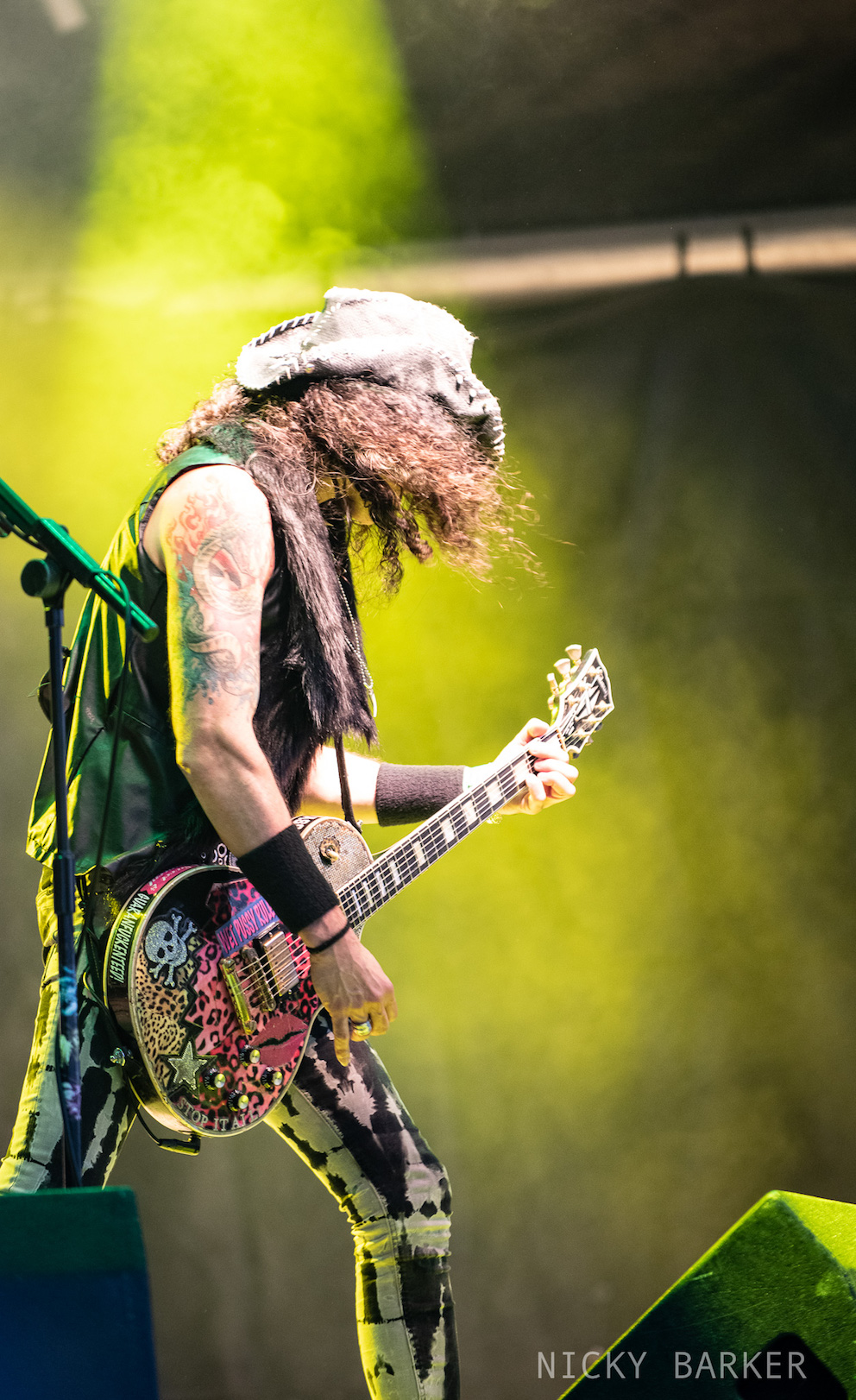 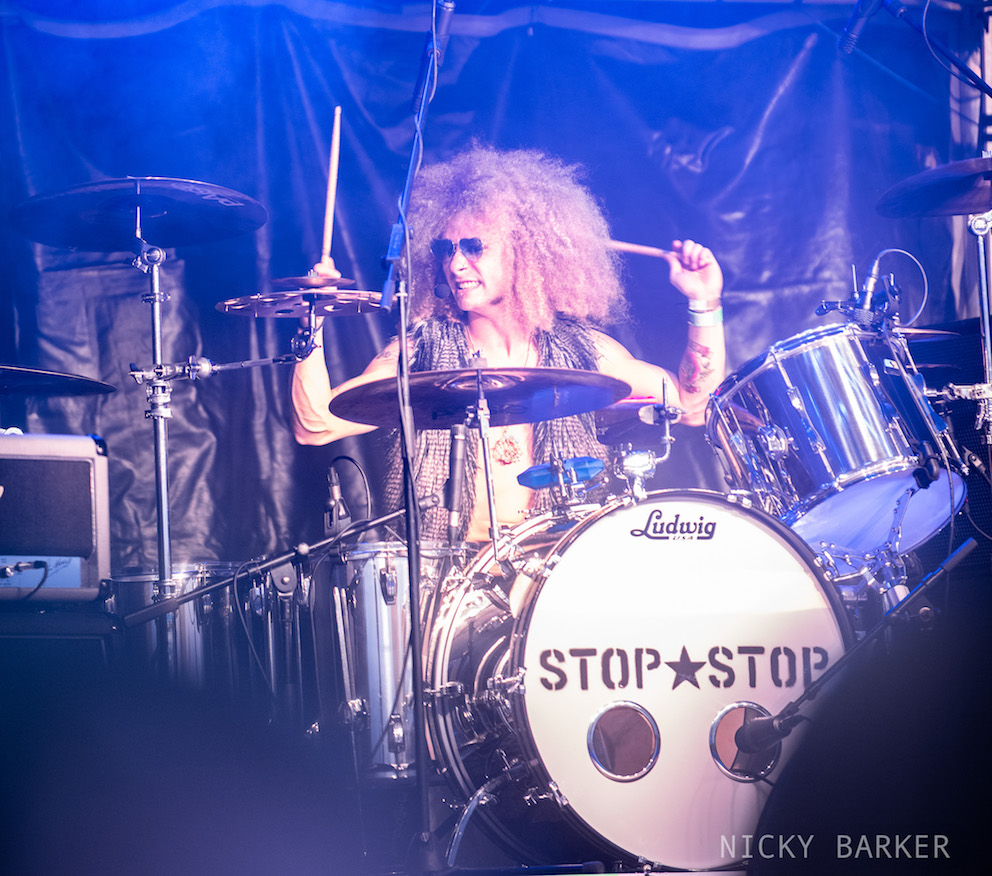 Singer Jacob with his Kiss-like painted face had the crowd’s attention instantly with his gritty voice and flamboyant style.  The band had an 80’s rock vibe with infectious songs, plenty of thundering guitar riffs and high energy drumming.  At one point drummer Danny put his snare drum around his neck and came to the front of the stage, the band then proceeded to jump down into the crowd and sang and danced in amongst the crowd.  The party just went up a notch! 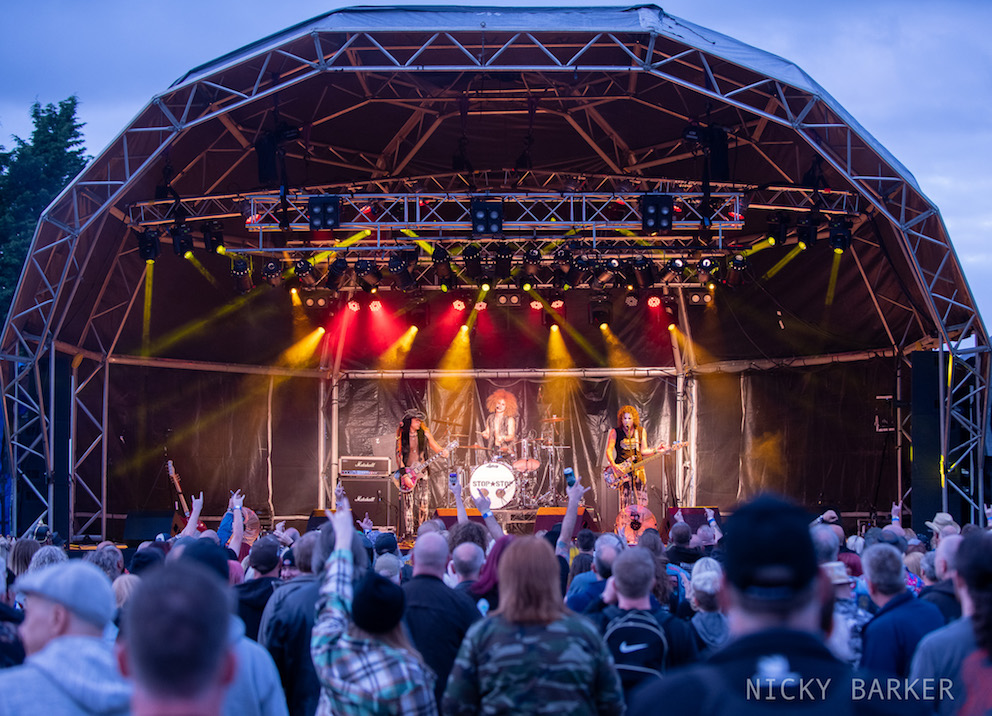 I’m not sure many of the audience had heard of Stop Stop, myself being one of them, but they got an excellent reception, I found them to be a really good fun band to watch. 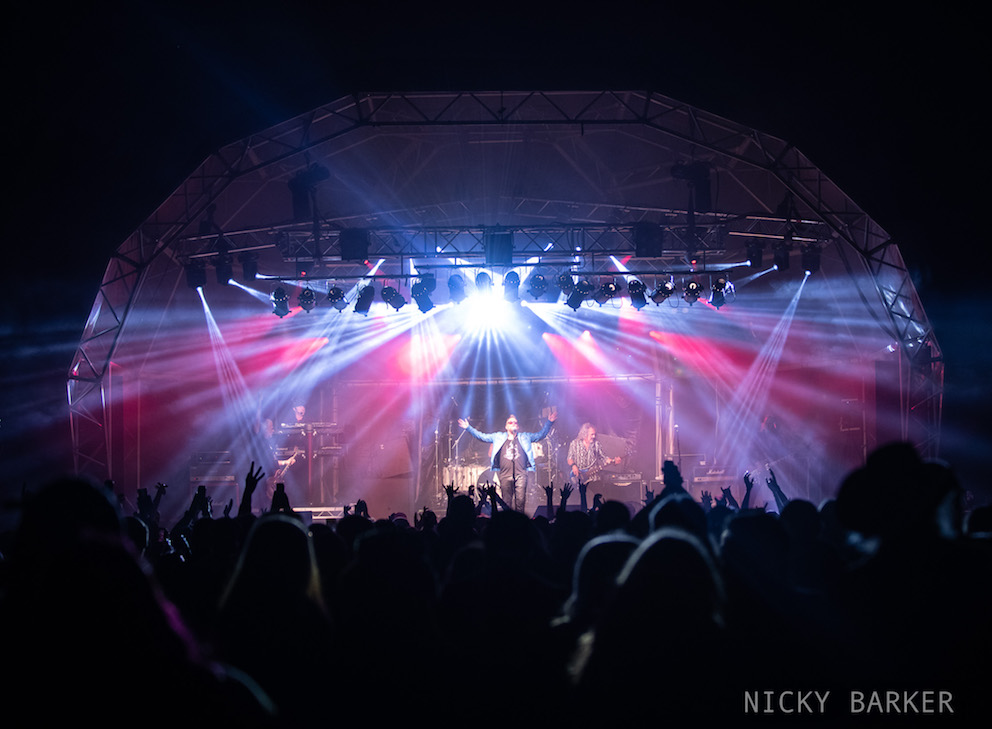 Cats in Space formed in 2015, are a British melodic rock band from West Sussex.  They describe themselves as “the most original classic rock band since the 1970’s”.  With a name like Cats in Space, I was expecting more of a punk rock vibe rather than classic prog rock. 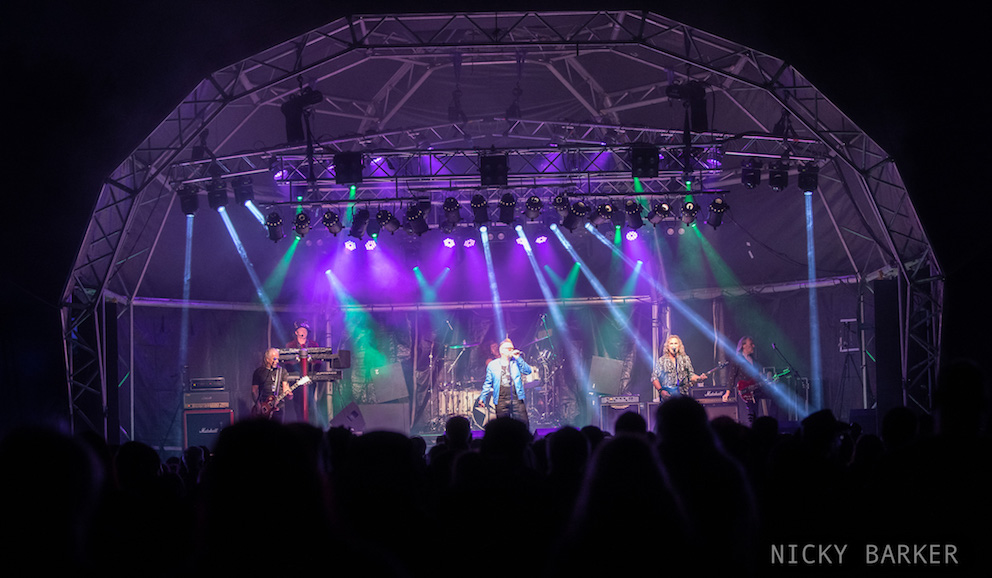 This 6-piece band certainly transport you back to the 70’s with lots of multi-layered, harmonious tunes.  Their sound is very distinctive and new singer Damien Edwards showcased his vocal range perfectly and seemed to be well received by the fans. 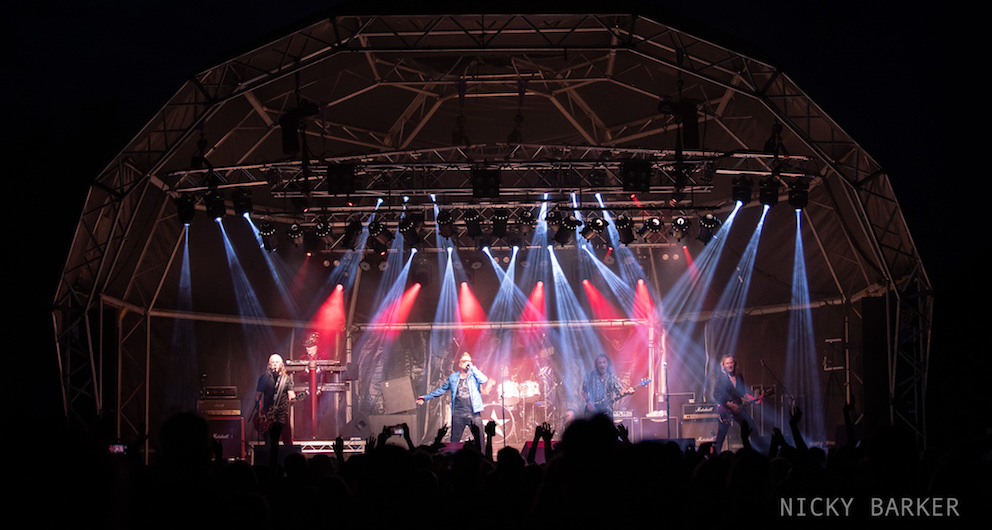 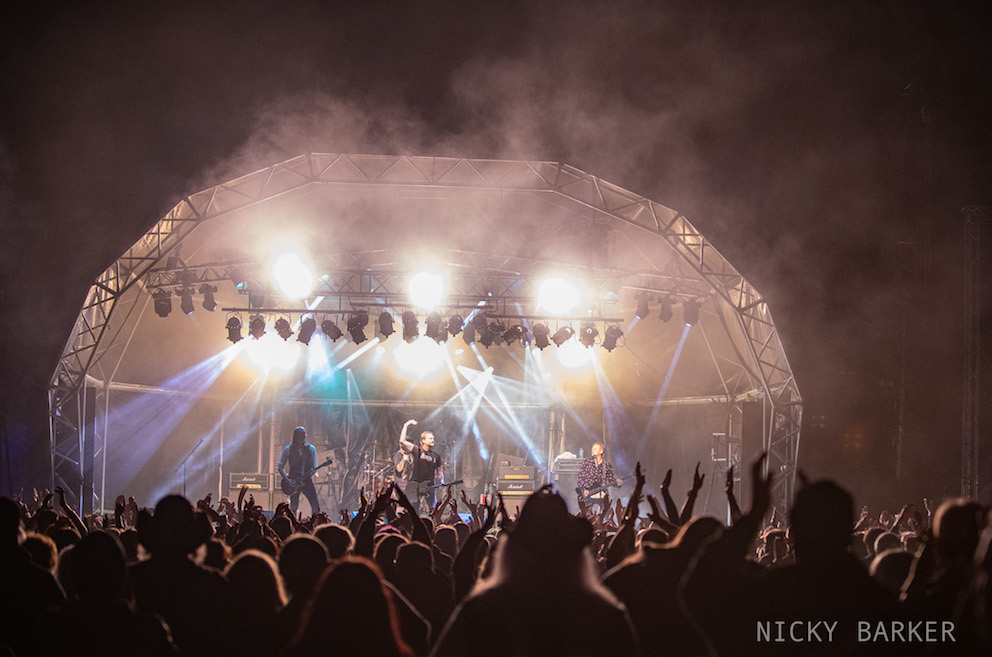 The barrier at the front of the stage quickly filled up for Friday night’s headliners Wayward Sons.  ‘The Sons’ have a large and very loyal fan base and there was an air of excitement gripping the crowd in anticipation of seeing their band.  Since their debut album ‘Ghosts of Yet To Come’ was released in 2017, Wayward Sons have received widespread acclaim. 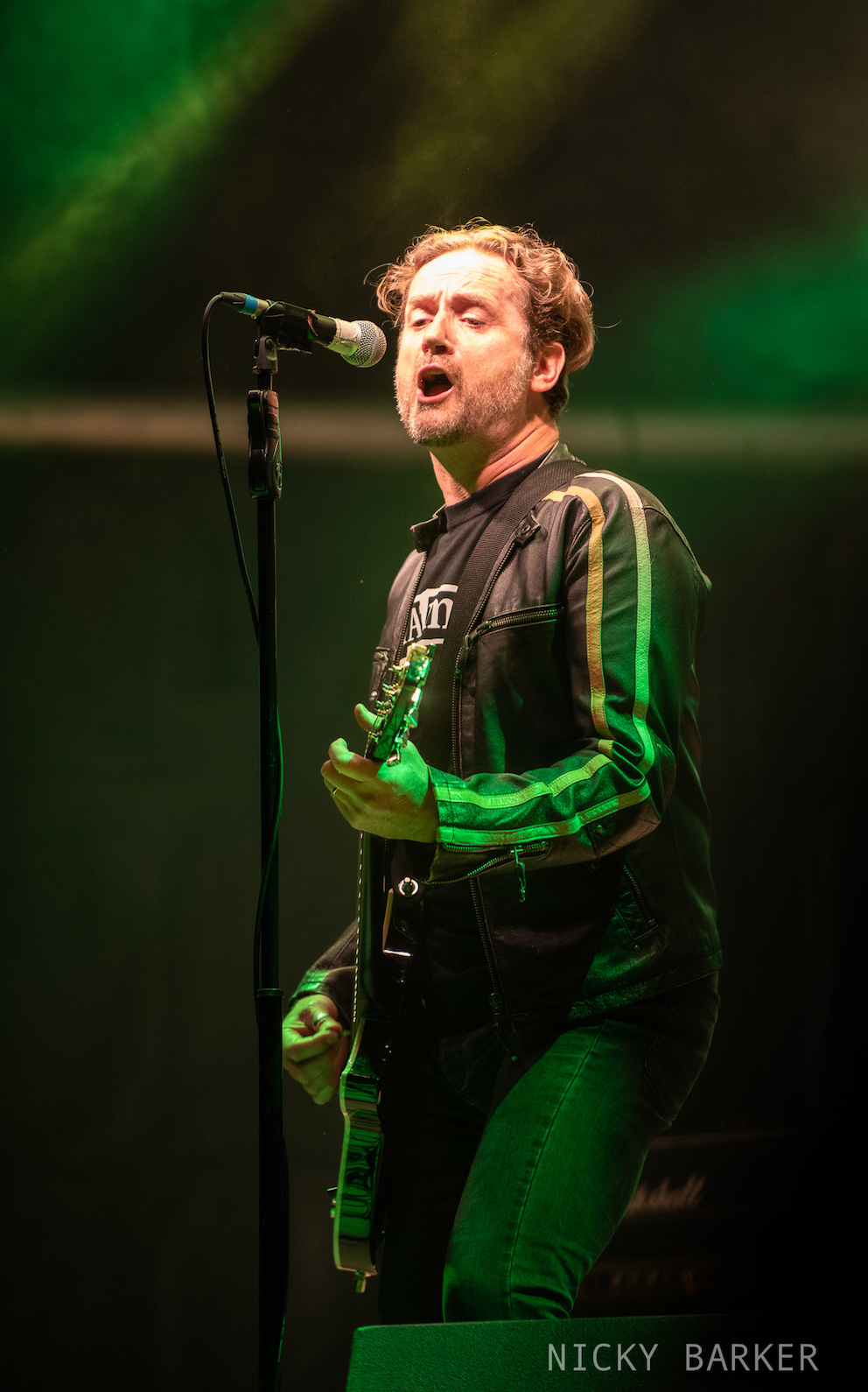 The lights went up and the band burst on stage to a huge roar.  Starting with ‘Any Other Way’ the crowd singing along to every word, which continued right across their set.  We were treated to some new songs from the band’s up and coming new album ‘Even Up The Score’ which the fans loved. 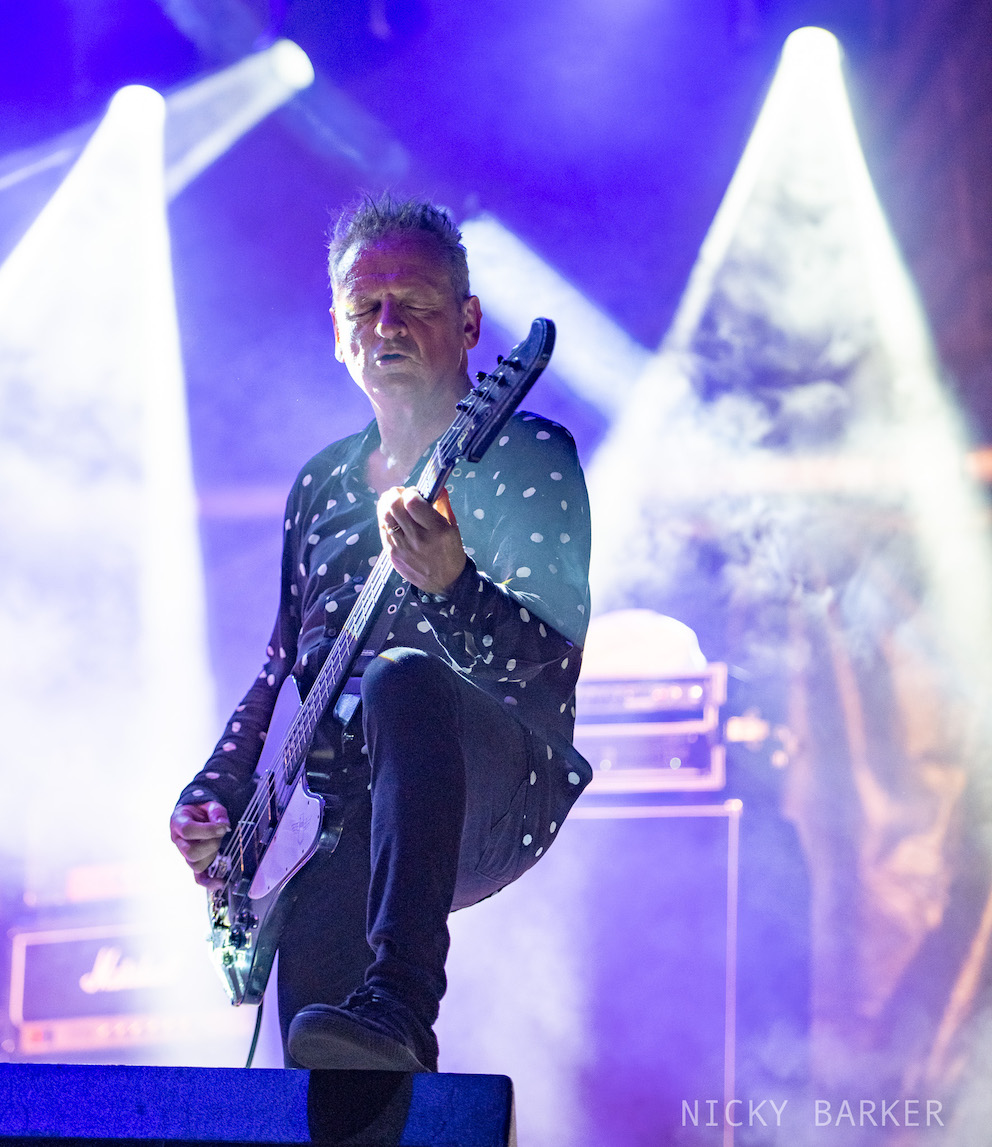 I have seen Wayward Sons quite a few times now, and in my opinion it’s the best the band have ever sounded.  They have always put on a good show, but tonight was another level again. Lead singer, Toby Jepson announced the band will be out on tour across the UK in November. 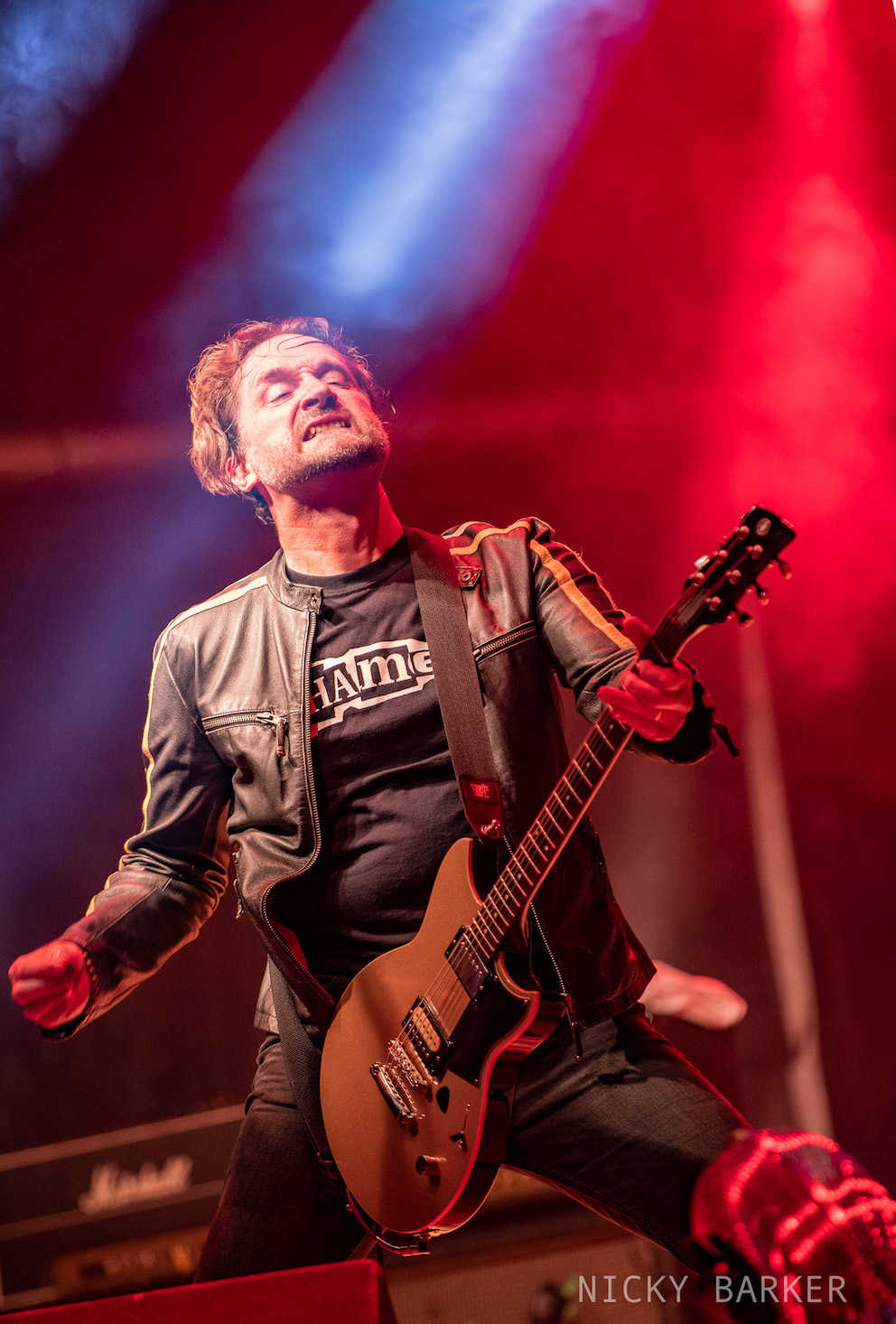 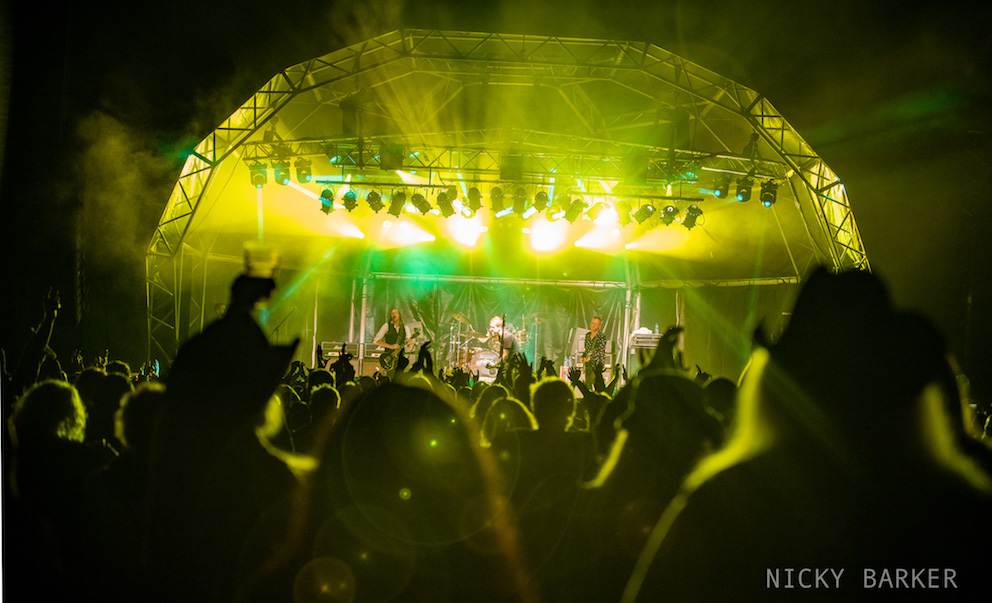 What a fantastic evening of rock music. If the Friday night warm up show was anything to go by.  Saturday was going to be something else.