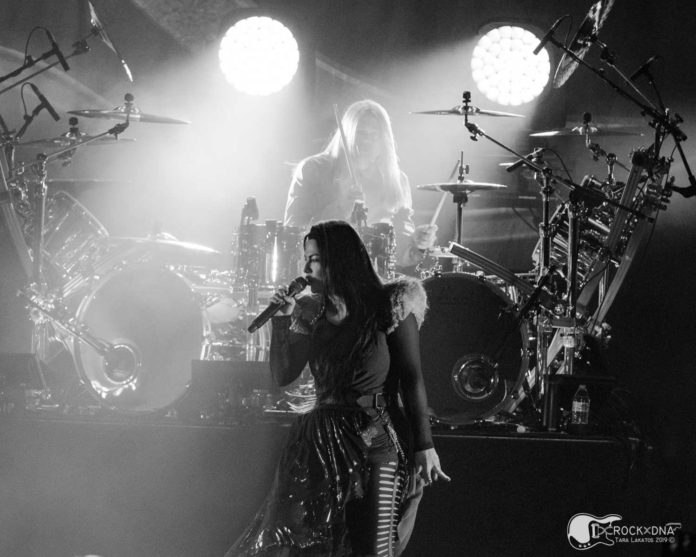 Evanescence returned to the Sands Event Center on May 14th 2019.  This time they returned with a full on rock show and brought along with them VERIDIA, an electronic-infused rock band out of Nashville, TN.  This was my second time seeing this tour package, as VERIDIA also toured with them in the fall of 2016. 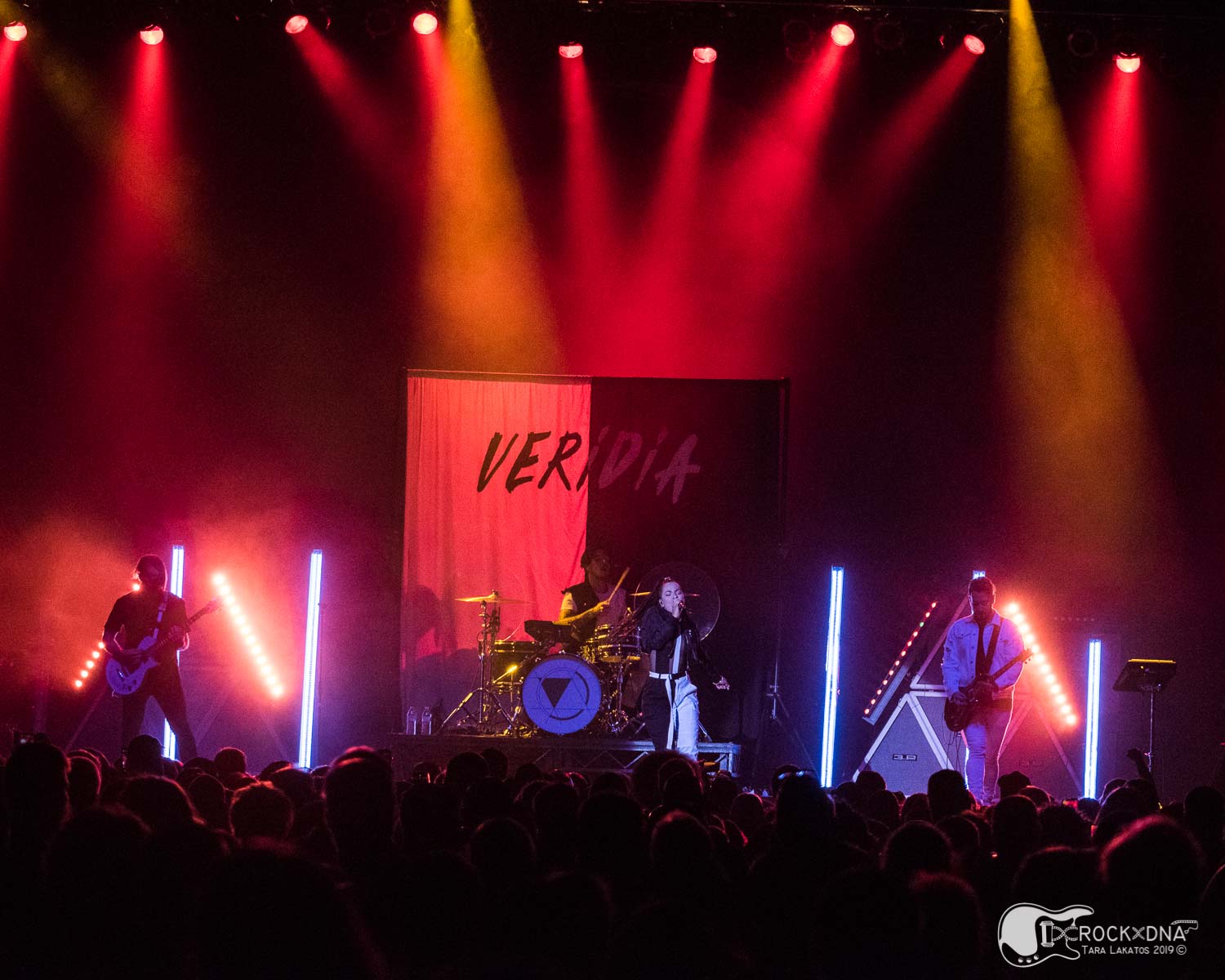 When I first saw them in 2016 I wasn’t totally impressed with them.  The band seemed a little cheesy with matching outfits and boy band-synchronized dance moves.  For a rock-type band it seemed all a little much.  This time around the outfits remained but Deena totally commanded the stage and the band seemed to have come into their own. 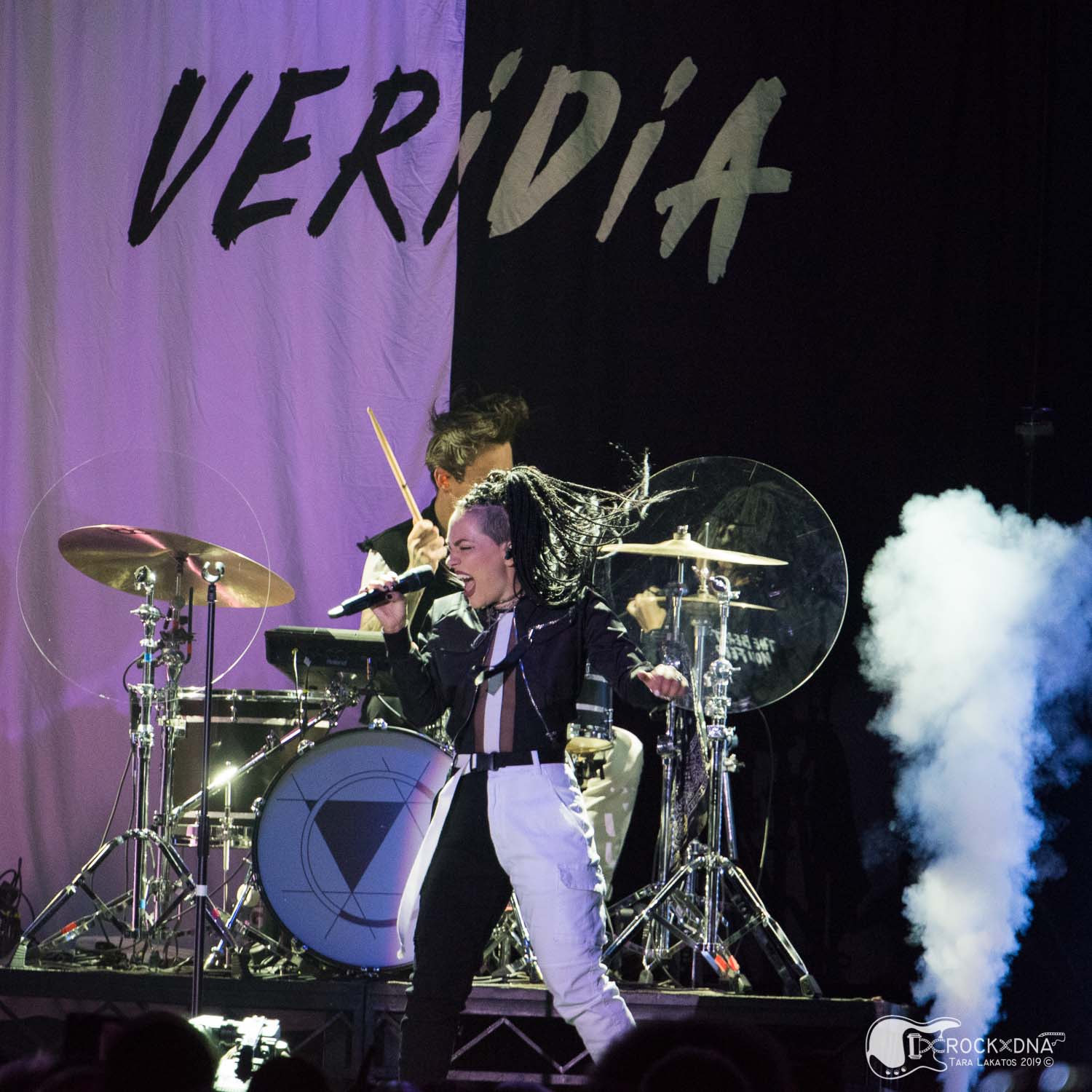 Their songs are definitely more on the pop side having the electronic dance backing beats but the crowd really rocked out to them.  My favorite song that they performed on this night was “Still Breathing” which is a single that they released in 2016.  The song is very catchy and has an incredible hook.  Deena definitely owned this song and worked the front row of the crowd reaching out towards them a few times. 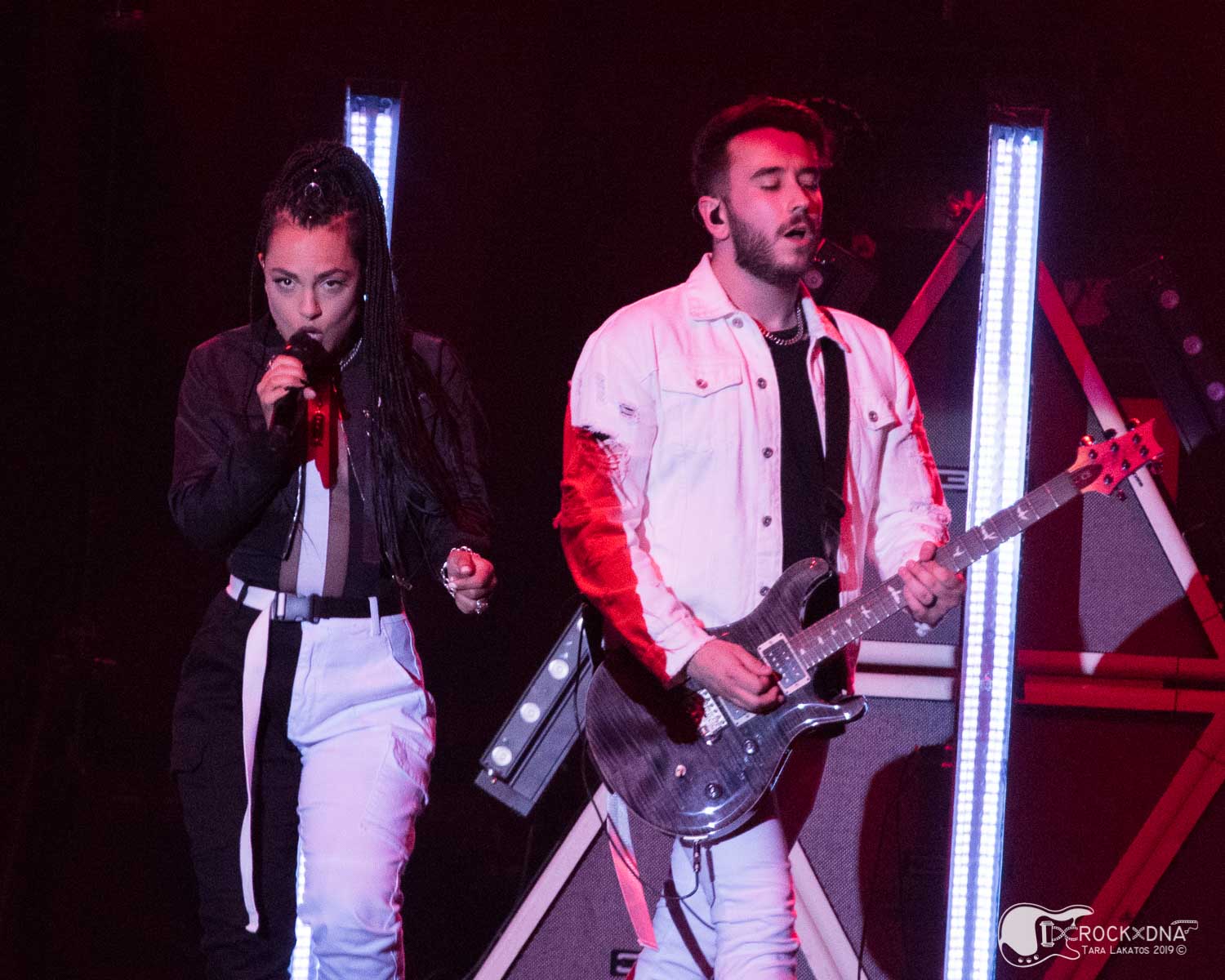 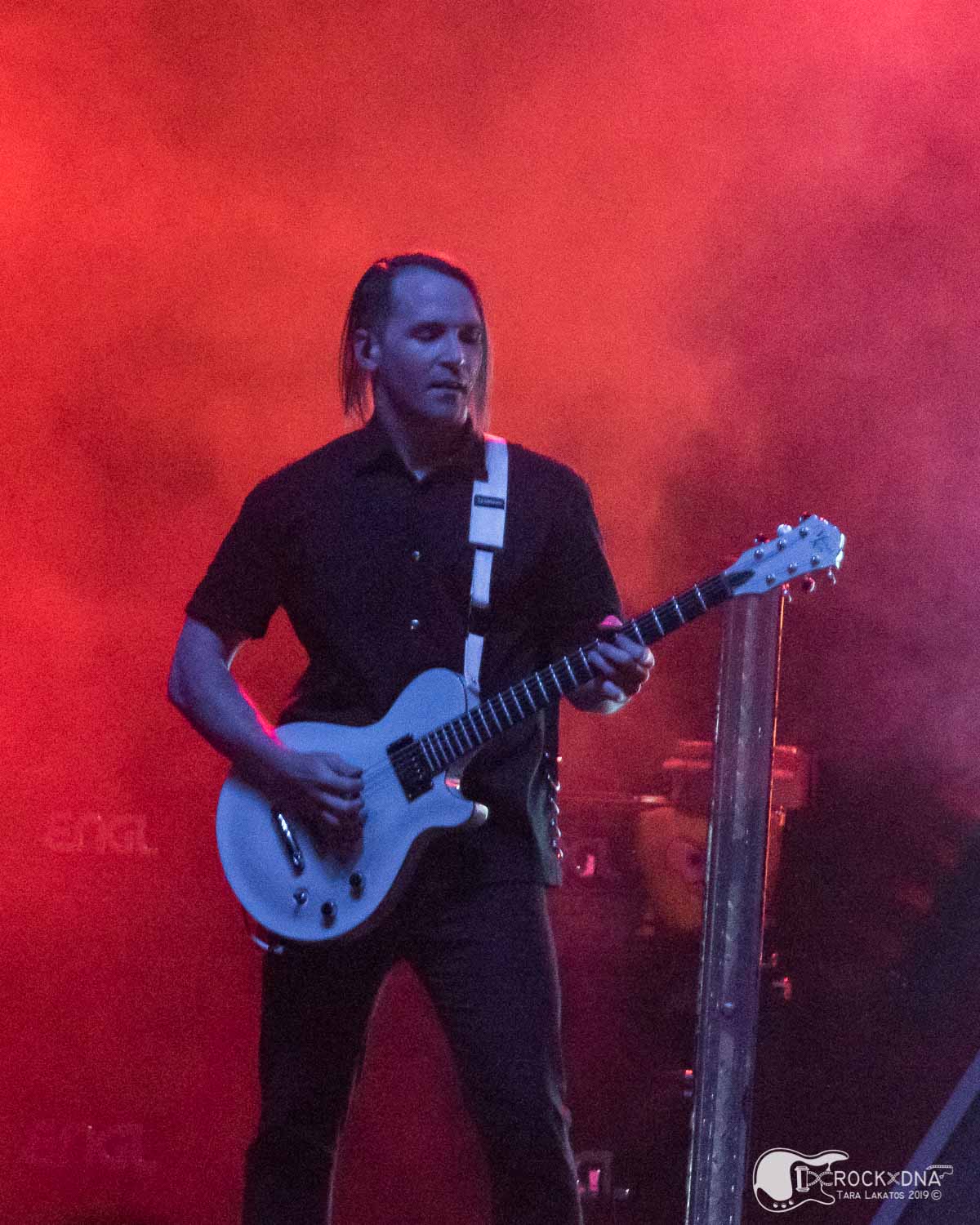 My only wish is that the band members were a bit more present.  Both guitarists were on opposite ends of the stage and either in the dark or bleached out by the bright backlighting.  I personally like to see band members reacting to each other it makes it more cohesive.  Overall VERIDIA had a much better show this time around and they show a ton of promise for the future. 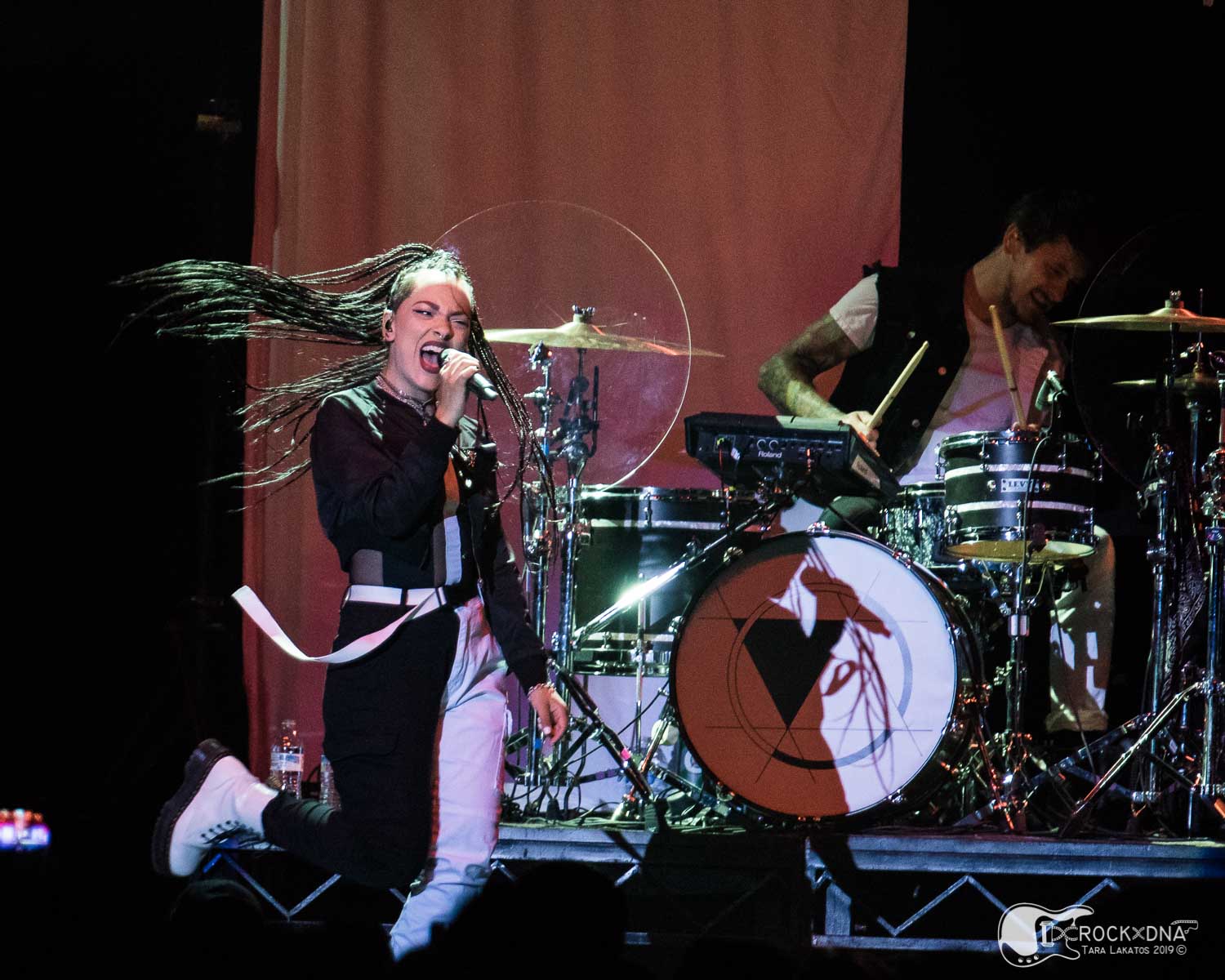 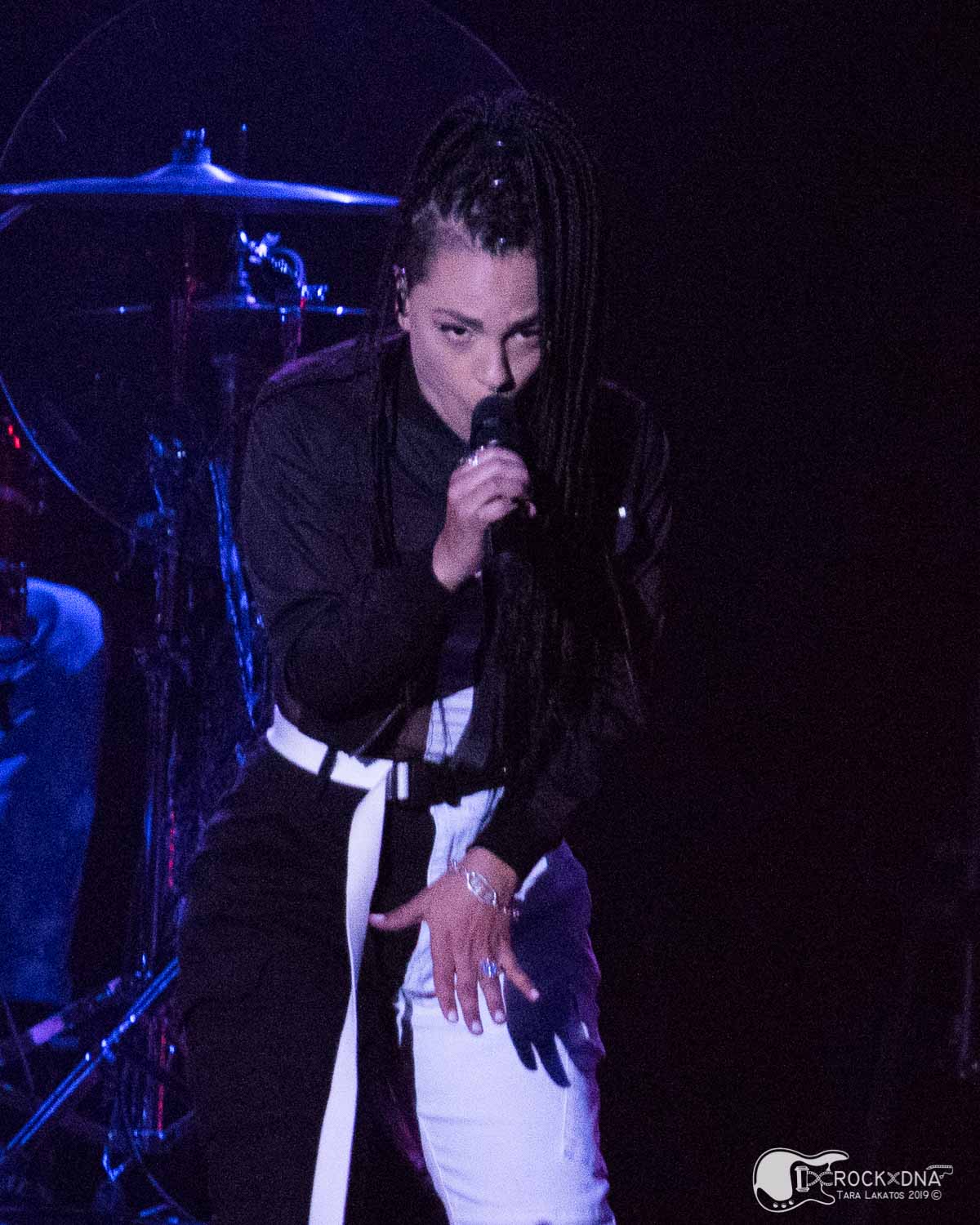 The last time Evanescence came to the Sands they had a nearly 30-piece orchestra in tow.  This time it was just the five of them ready to torch the venue.  Evanescence consists of Amy Lee (vocals, synth, piano), Jen Majura (guitar), Troy McLawhorn (guitar), Tim McCord (bass) and Will Hunt (drums).  I was supremely disappointed in the lighting this time around.  As a photojournalist I use visual media to tell a lot of my story; when you cannot see the band that piece is missing.  The lighting was super dark with blues and purples and Will’s drum kit was surrounded by blinding white lights.  This proved difficult to navigate for all photographers in attendance at this performance. 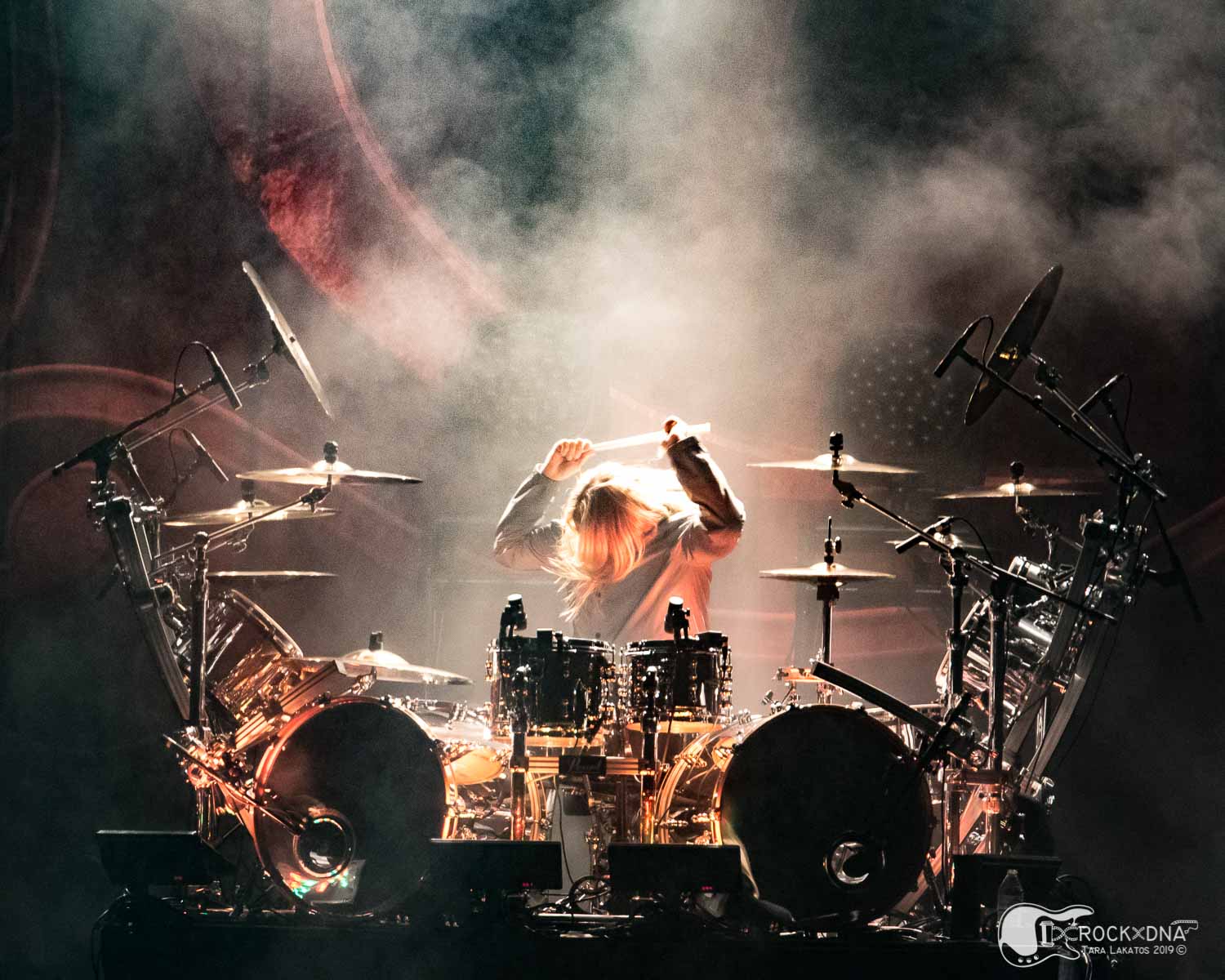 Now onto the music… Evanescence had taken quite a hiatus only playing a small number of shows in recent years before the “Synthesis” album arrived.  While that album was orchestral based, most of the songs were reimagined from previous recordings.  There were a couple of new songs in the mix but they were not the rock and roll that we had been used to.  In a recent interview Amy stated that they will be writing new material and hope to have something out next year but that they were not going to rush the process. 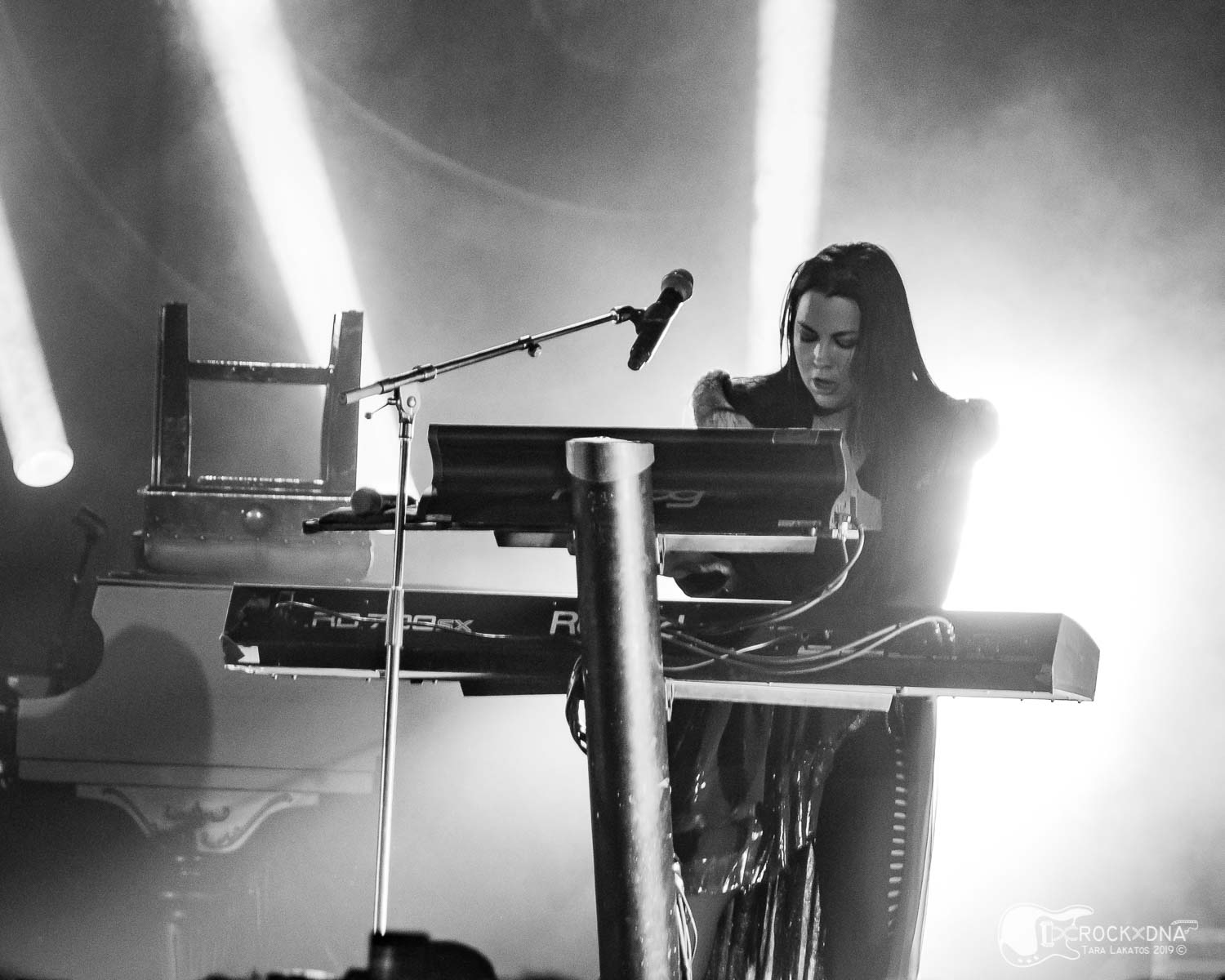 I mentioned all of the above because they opened their set with a rock version of “Imperfection” which was one of the new tracks on the “Synthesis” album.  Their music is super versatile because it works both ways.  This song packed a super punch without the added orchestral touches.   Amy is a powerhouse vocalist, with an insane uniqueness.  She’s not a pure rock vocalist but she’s also not totally on the operatic side like Sharon Den Adel from Within Temptation.  Evanescence also performed “Take Cover” which is also a relatively newer single.  This song started off a little slow and leads into a chorus reminiscent of classic rock bands.  Jen, is the newest addition to the band, it’s a joy to watch her play guitar and sing backup with Amy.  They complement each other very well.   They also performed my favorite rock out song “Call Me When You’re Sober”.  At this point I was in the crowd and singing loudly along with everyone else.  There was a bit of space where I was in the back and one very exuberant young lady was dancing like it was the best night of her life.  There’s nothing better than being surrounded by a crowd of people that are in love with the moment that they are in. 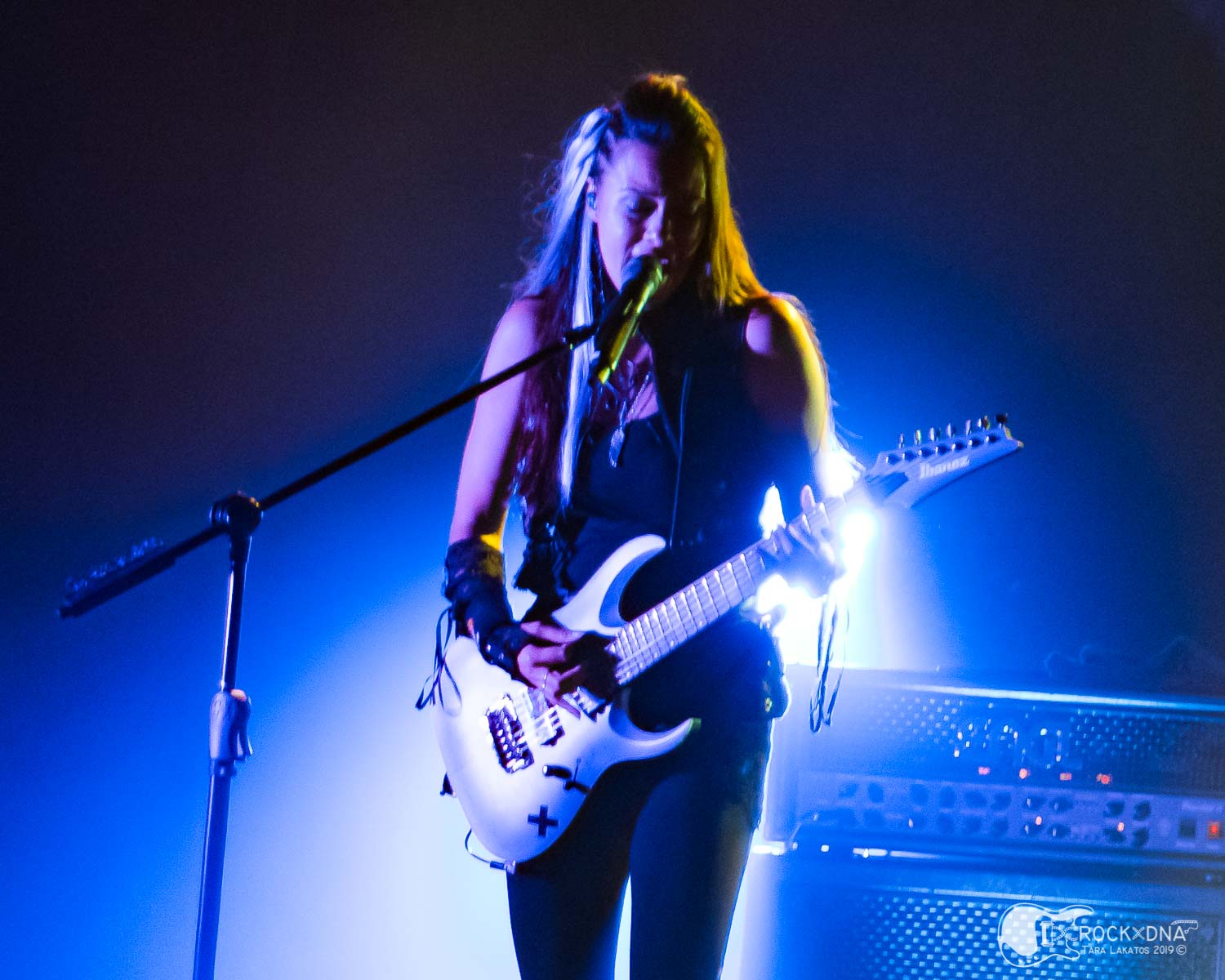 A few favorite moments of mine were songs that Amy got to play with her grand piano.  One highlight was “Lost in Paradise”.  Amy started off by giving a short speech to audience saying that it was ok to be broken and to admit that you can’t do it all by yourself.  She went on to say that it was ok to allow yourself to fall apart, and invited the audience to fall apart with her during this performance.  This song is so haunting and Amy’s vocals were on point.  The words literally floated off of the stage and into your soul.  About halfway through the rest of band joined in to drive the song home.  I am sure there were plenty of fans left in tears after this one.  Lastly the encore started with “My Immortal” which is a song that Amy admits that she had lost touch with and regained her love for it through her fans.  She sat down at the piano, yelled sing with me, and went right into the song.  This was one of the most beautiful things I have ever seen at a concert, literally every individual in the venue was singing along.  Amy asked the audience to light up their phones for the second verse, everyone of course obliged and lit the place up.  It’s quite rare for a song to touch so many so deeply at the same time.  I’m glad that Amy regained her love for a song that speaks to so many different people, it would be a shame if she had stopped performing it. 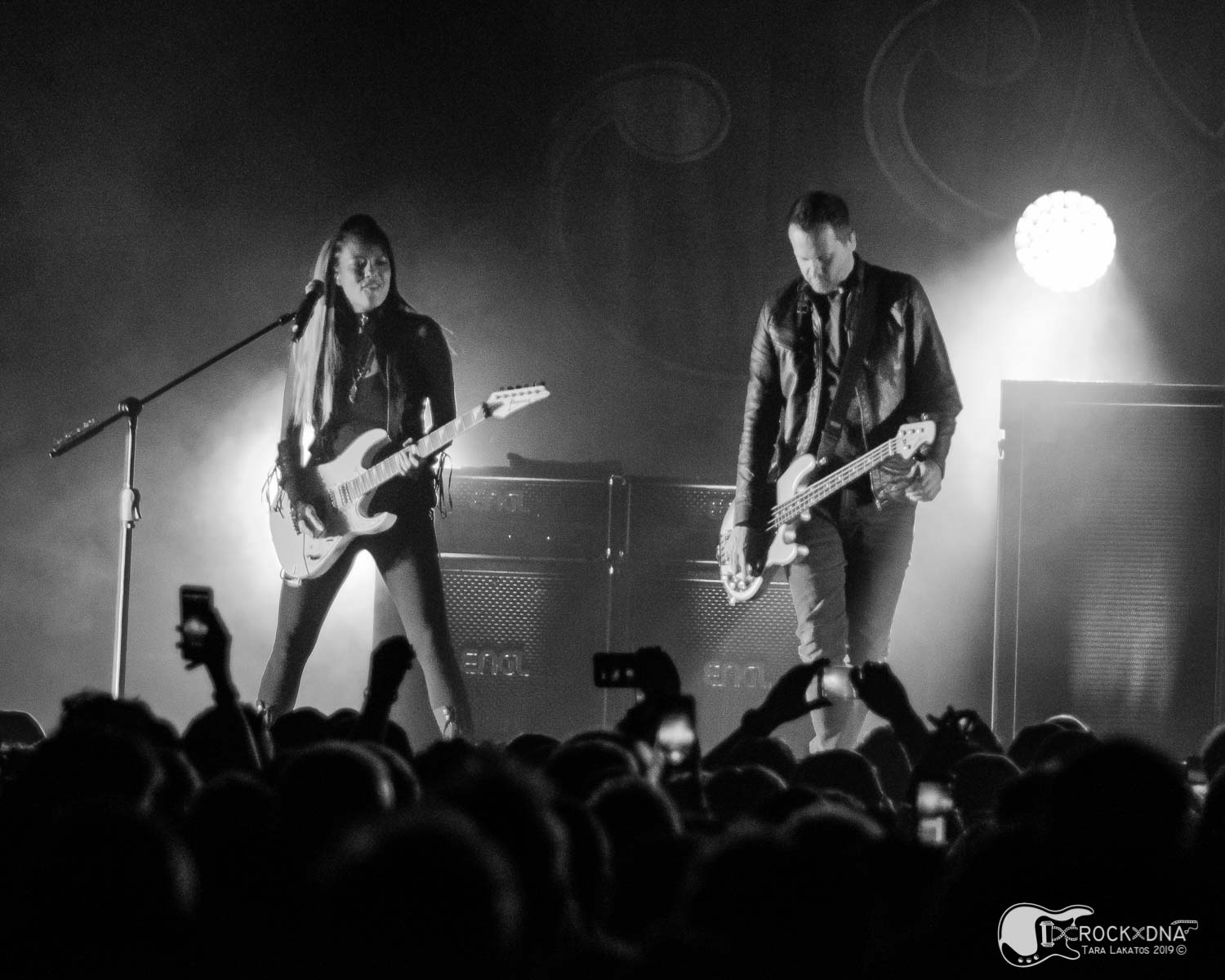 This was a wonderful night of music by all involved.  VERIDIA had a very solid opening set and Evanescence left all of their diehards wanting more.  Evanescence has a few dates in the U.S. over the summer and head over to Europe in September.  Hopefully in between they keep their promise of writing new music.  With or without new tunes they have lifelong fans that will show up to their concerts as long as they have them.  Their fan base is loyal and is spread all over the globe.   If they come your way this year be sure and catch them since I am not sure what their future plans hold while they are writing and recording. 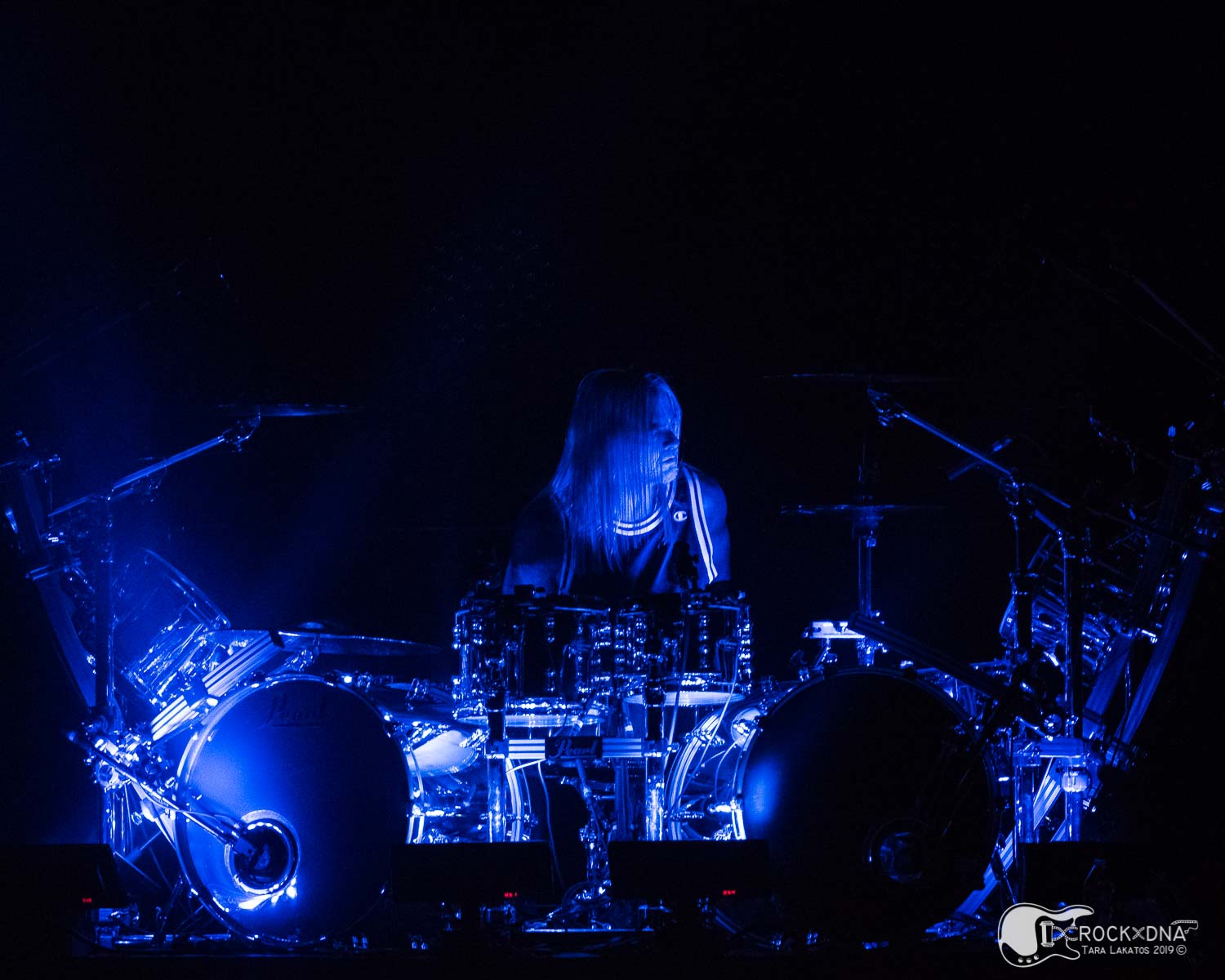