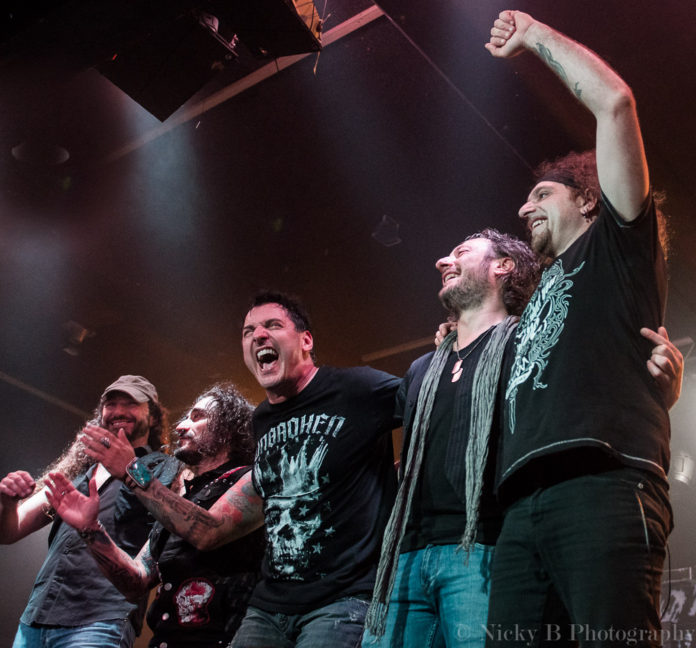 Hardline are an American hard rock band formed in 1991 from a union between brothers Johnny and Joey Gioeli, who were joined by Journey/Bad English guitarist Neal Schon, Todd Jensen on bass and also from Bad English Deen Castronovo on drums.  Their debut album ‘Double Eclipse‘ was released in 1992 and their first hit from the album was ‘Hot Cherie‘.  They have released 5 studio albums to date. 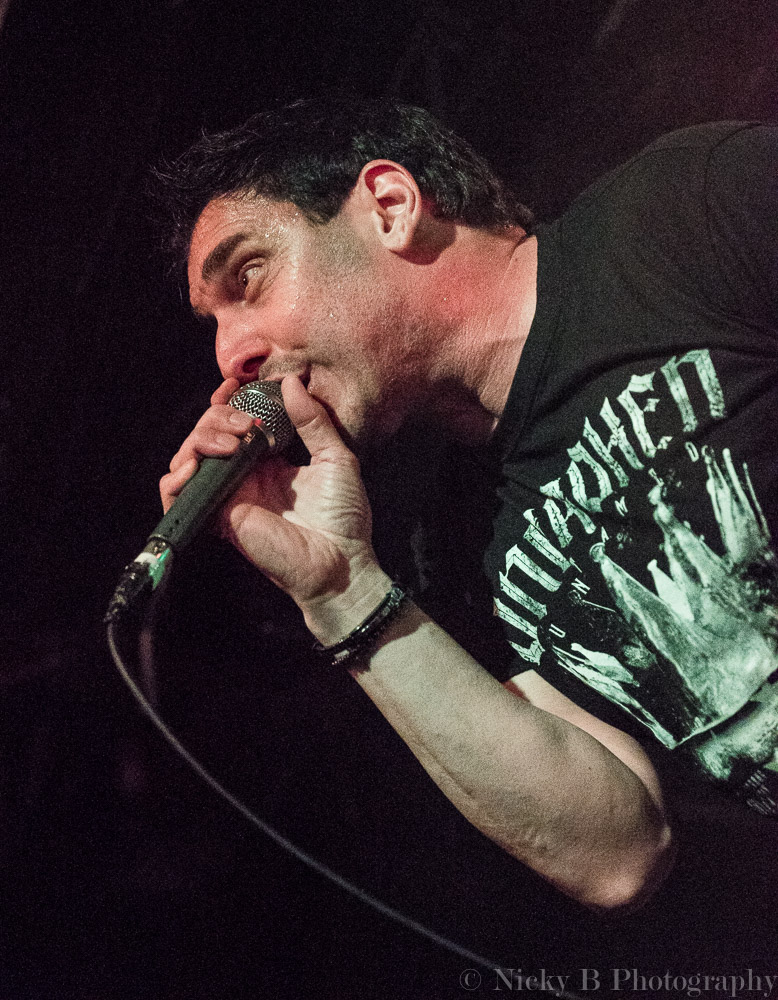 The 1990’s saw grunge and alternative rock take over the melodic rock scene so Hardline were never really popular in the mainstream however, they did have a steady fan base starting to grow.  Over the years the band has seen numerous band member changes and currently Johnny Gioeli remains the only original member.  The current line up has an impressive pedigree of talented musicians.  They are Johnny Gioeli (lead vocals), Alessandro Del Vecchio (keyboard/backing vocals), Anna Portalupi (bass), Mario Percudani (guitar) and Franceso Jovino (drums).  For this weekend only Nic Mazzucconi was filling in for Anna on bass. 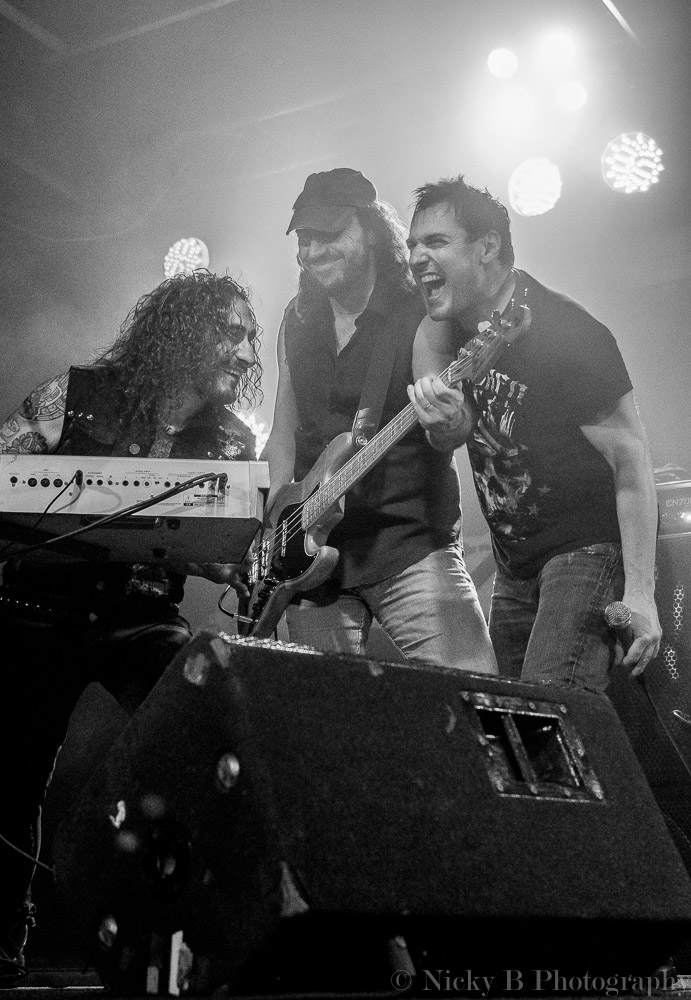 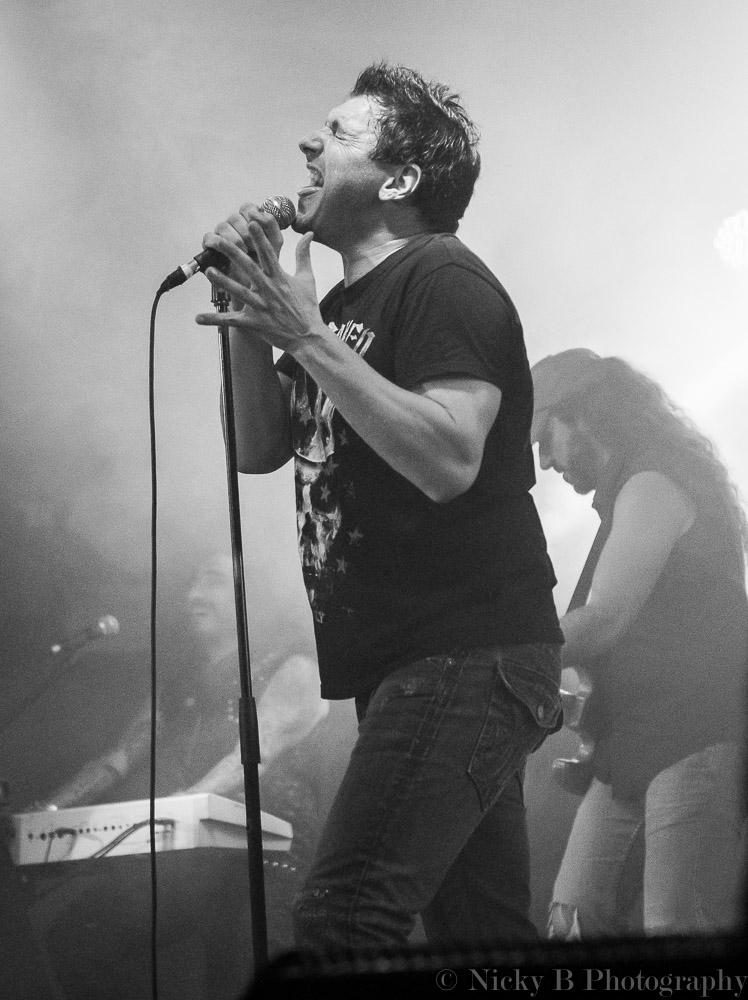 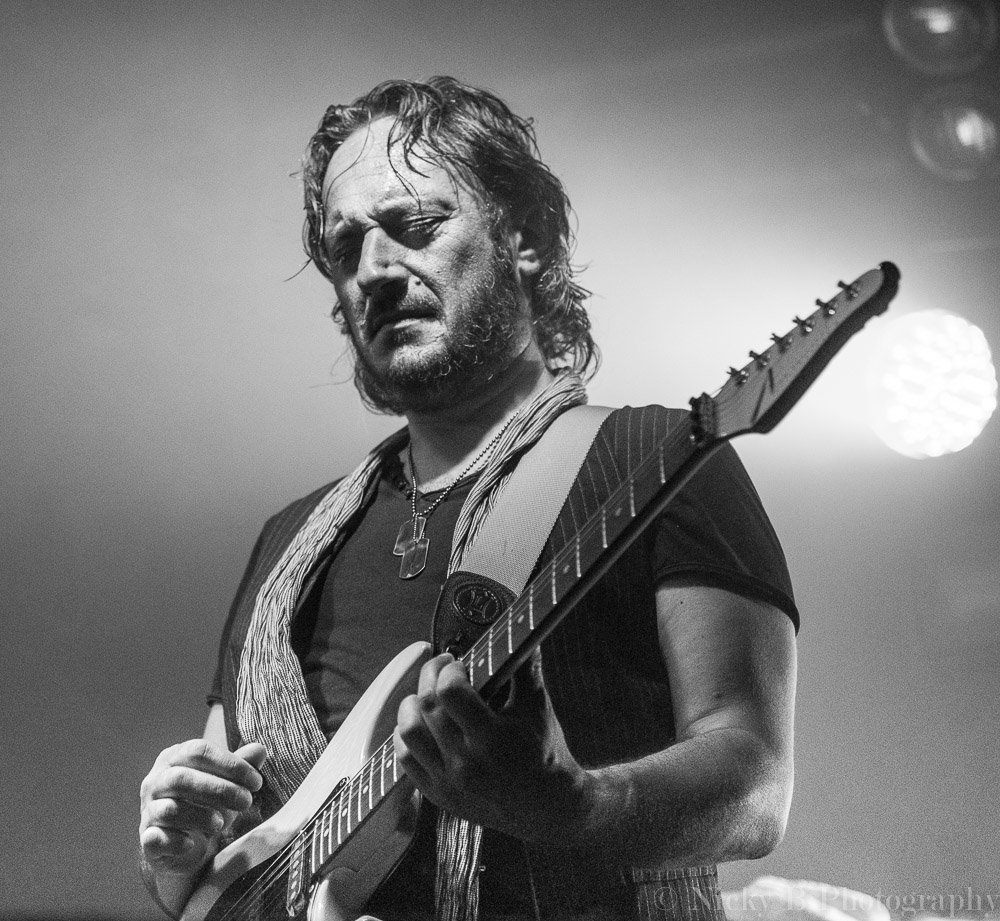 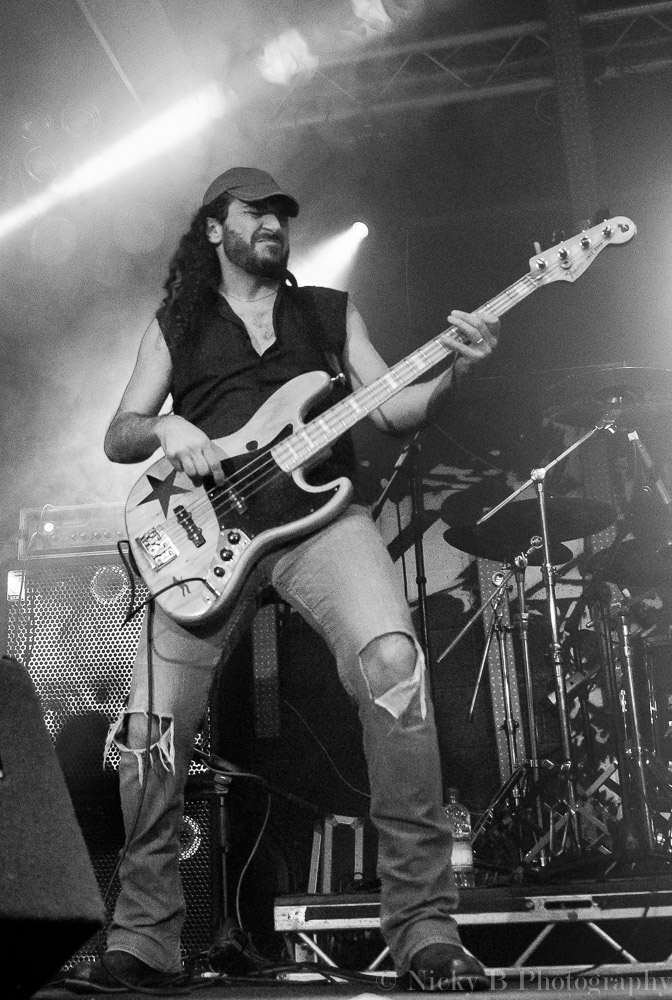 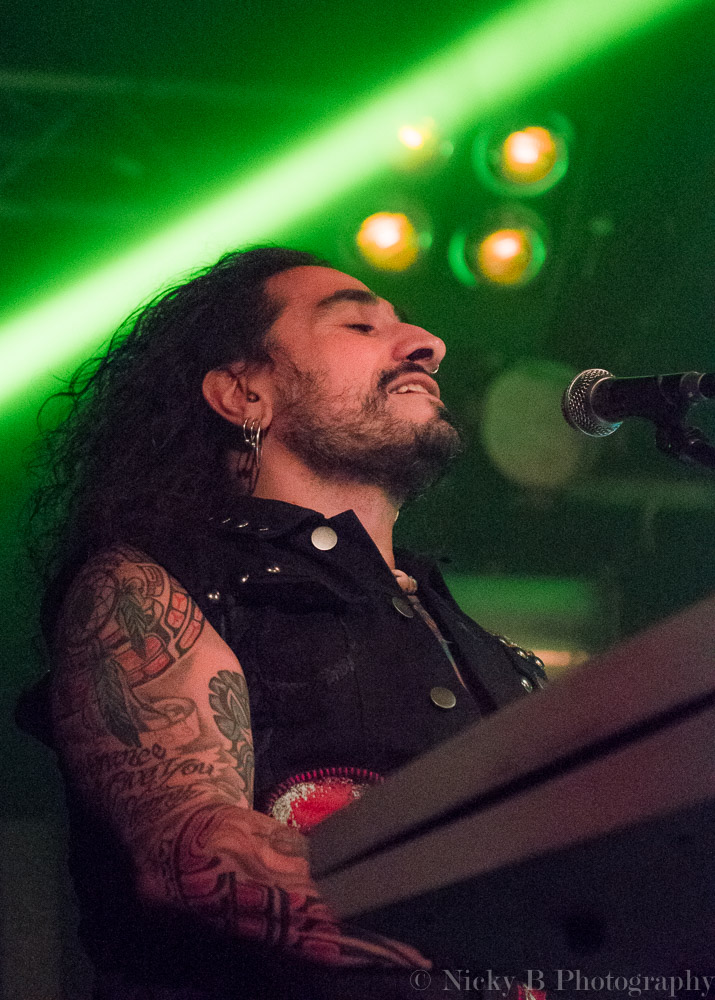 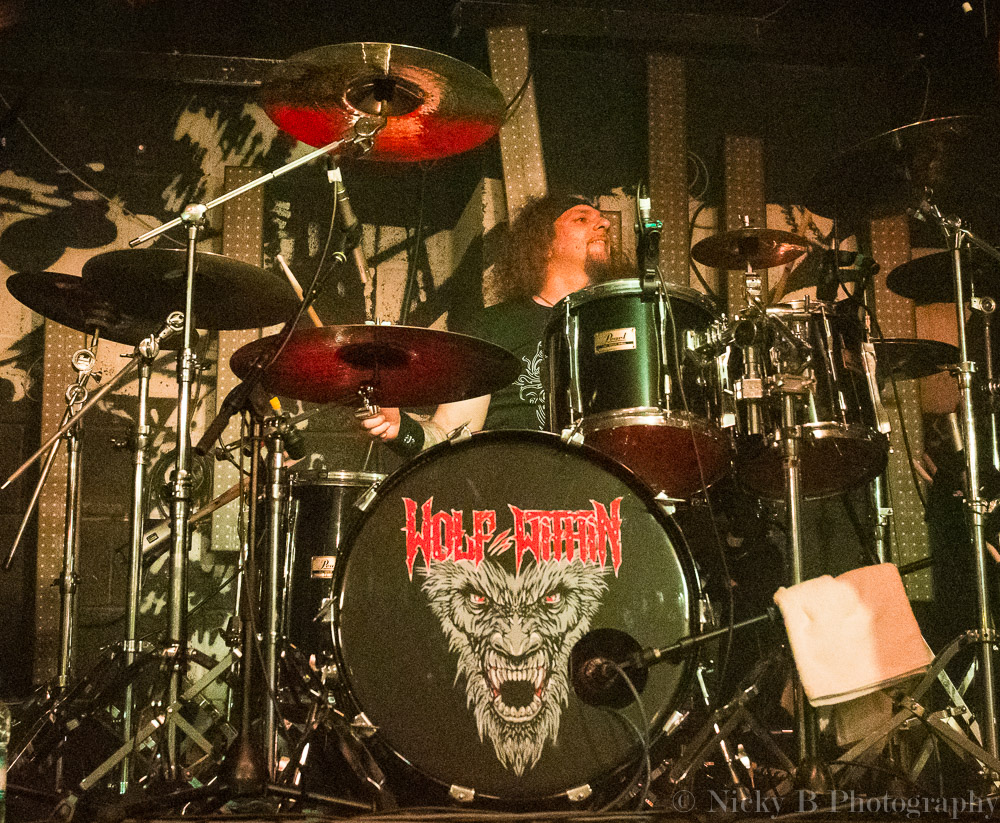 Hardline are currently on a European tour celebrating the 25th anniversary of their first album ‘Double Eclipse‘ It’s also been 25 years since Hardline have played in Sheffield and there were lots of loyal, excited fans in the room who have waited patiently since 1992 to see the band play their classic songs again.  One lady was pregnant in 1992 when she last saw Hardline and tonight she brought her daughter, now 25 to see them play. 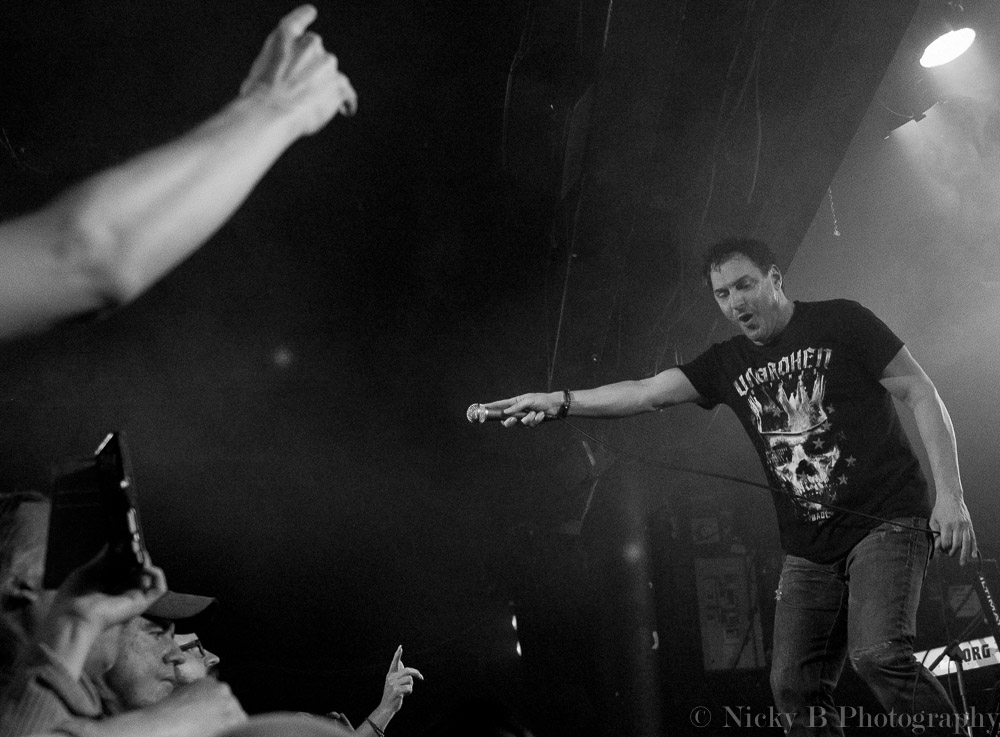 The Corporation is a small venue with a lovely intimate feel.  I don’t think this was a sell out show but the room was packed full of buzzing fans.  The band came out on stage to a rapturous reception and went rocking straight into their opening song ‘Where Will We Go From Here’ from their 2016 album ‘Human Nature‘.  Johnny Gioeli is a fantastic front man and began interacting with the crowd immediately; leaning over my head in the photo pit at one point to shake a fans hand.  Going straight into their second song of the evening, riff heavy ‘Takin’ Me Down’ all the while Johnny pointing and smiling at the crowd.   Mario did an amazing job shredding the guitar; he plays his instrument with incredible passion.  He had big shoes to fill with the very recent departure of Josh Ramos, but I think he did a brilliant job.

After a very poor attempt at a Yorkshire accent from Johnny telling us “he’d had Shepherd’s Pie”,  the nostalgic trip continued with ‘Dr Love‘ before the pace slowed slightly with ‘Human Nature‘.  Johnny’s voice is pure brilliance and extremely powerful. 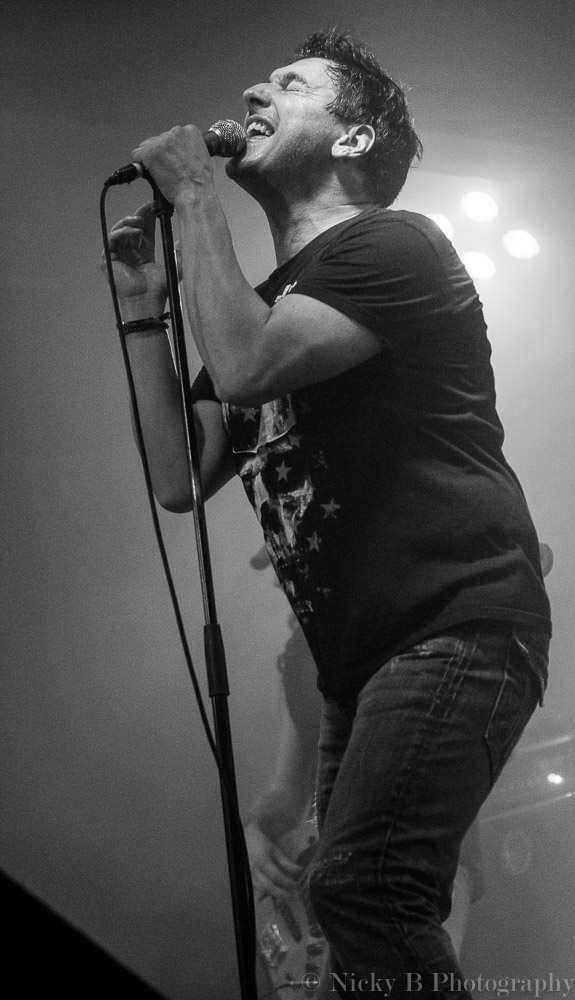 Anna Portalupi has been replaced on bass this evening by Nic Mazzuconni who took up his spot on the stage next to keyboard player Alessandro Del Vecchio;both delivering the deep melodic sounds to the songs in a impeccable manner.  Next up was another song from ‘Human Nature’, power ballad ‘Trapped in Muddy Waters‘.  A drum solo followed from the very talented Francesco Jovino.  Hardline do not have the use of a tour bus in Europe to transport their own equipment, so this evening Francesco’s thunderous beats came from the support band’s drum kit. 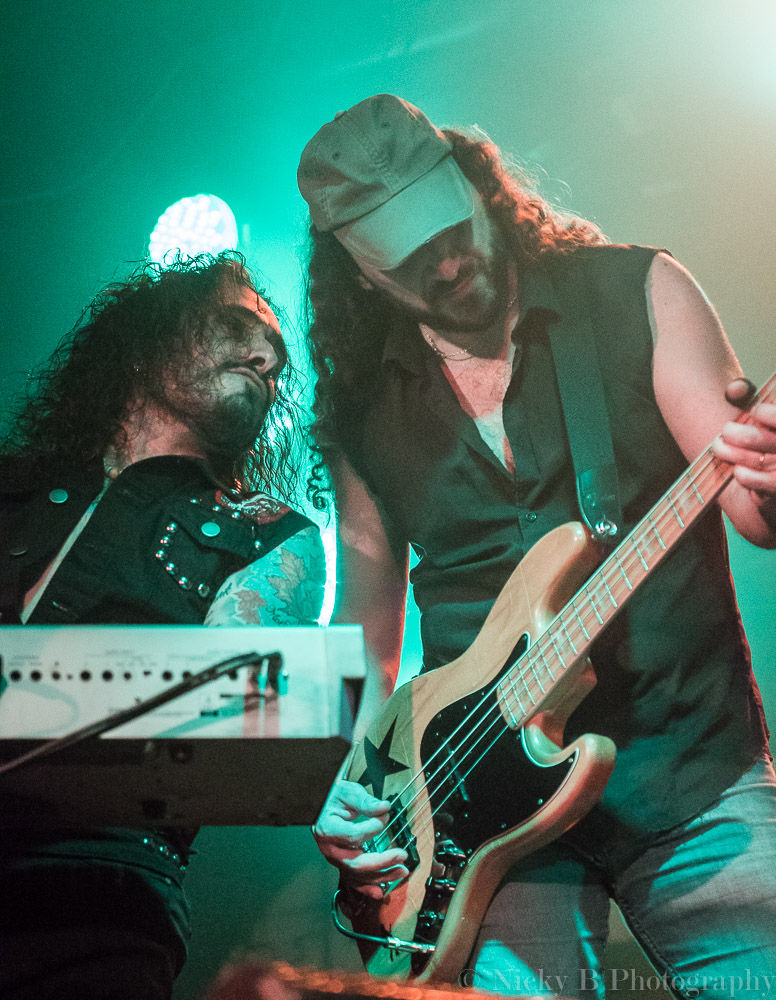 The musical joy continued with classic songs from Hardline’s catalogue, such as ‘Life’s a Bitch’ and ‘Fever Dreams’.  Johnny told the crowd how his dad gave him the inspiration for the next song ‘In The Hands of Time‘.  Johnny thanked the crowd as he joked “all 36 of you”.  There was of course far more than 36 people in the room.  He went on to say “without your air, we can’t sing”.  He then said “this is about the time we go off stage and you all shout for more, but we don’t have much time, and I would rather carry on singing”.  Blasting straight into the bands most famous song ‘Hot Cherie‘ the crowd singing their hearts out.  The show was closed out with my personal favourite ‘Rhythm From a Red Car“. 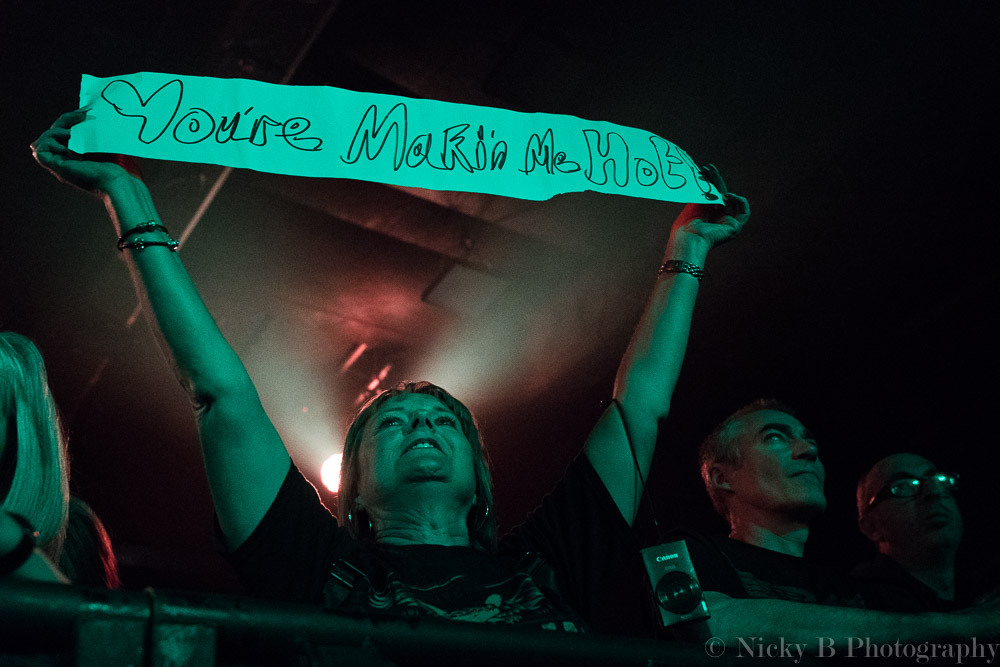 I don’t think anybody wanted this show to end. This gig definitely had a 90’s party vibe to it.  No sea of mobile phones held aloft,  just lots and lots of fun, dancing, head banging and singing.

Hardline are genuinely lovely guys, they all came out after the gig to meet and greet the fans left in the venue.  Chatting and taking selfies.  I got the impression with the reception they got from the fans and with a sixth studio album in the making, they will be back in the near future. 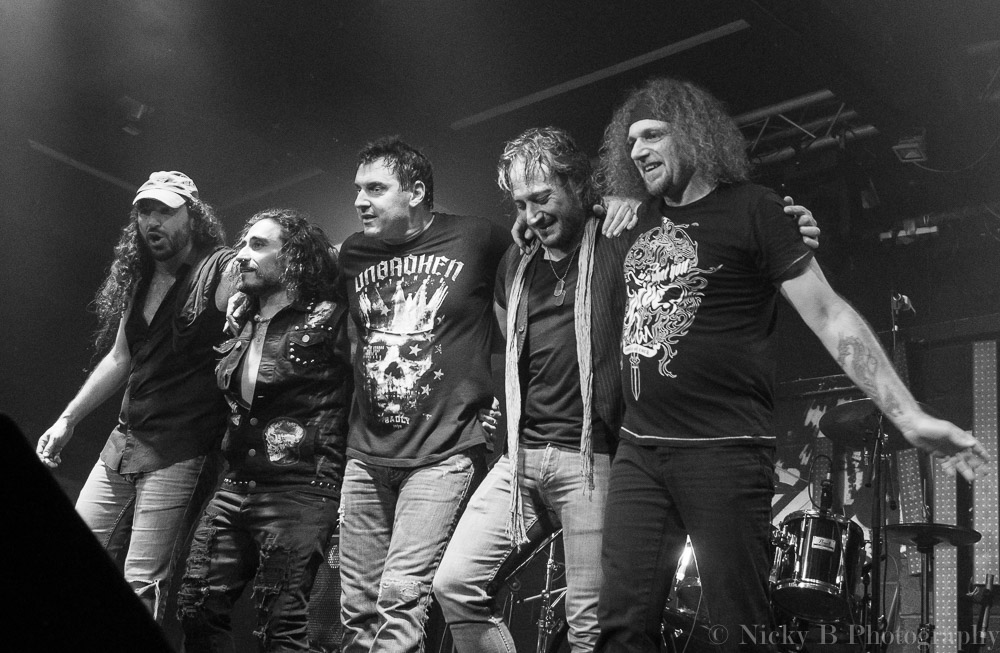