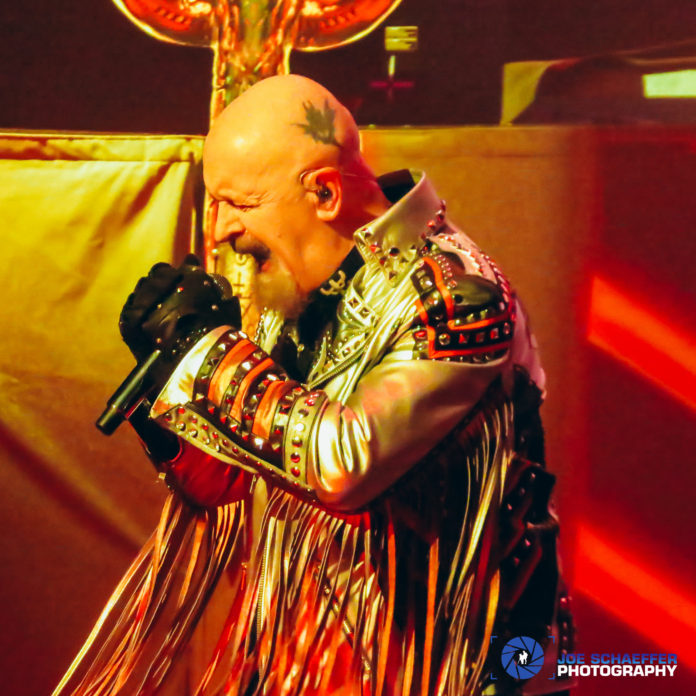 The combined forces of Judas Priest, Saxon and Black Star Riders brought their collective “Firepower”, “Thunderbolt” and “Heavy Fire” to the Microsoft Theater in Los Angeles on Sunday night.

Pure metal power was in display all evening.  Even the Black Star Riders have tailored their set to lean towards the harder side of the their catalog for this tour. It’s not often that the anticipation lives up to the expectations, but tonight, from start to finish, KICKED ASS! 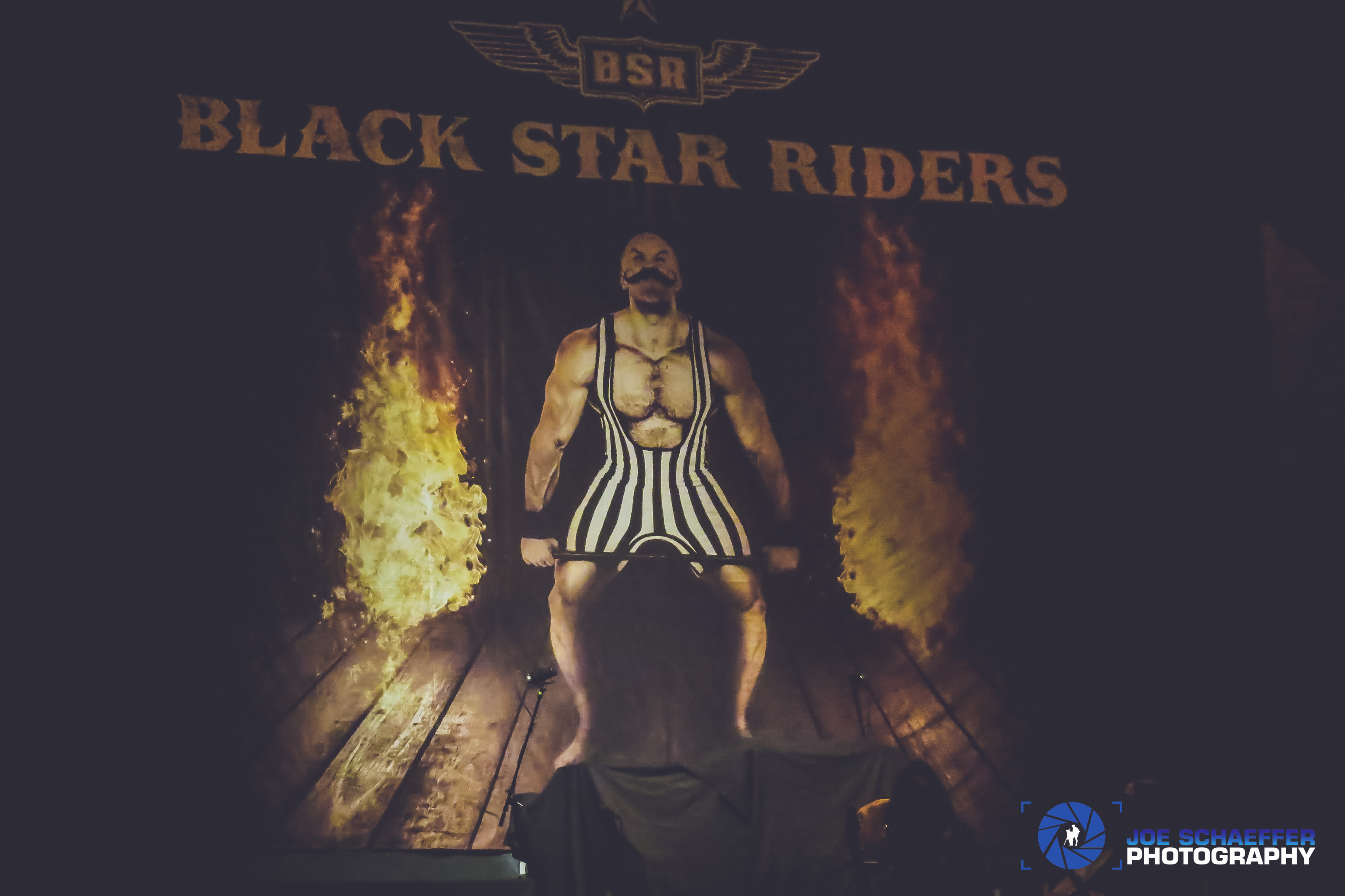 The band have well and truly stepped out of the Thin Lizzy shadow and created their own beast.  Black Star Riders kicked off the evening and made a usually tempered L.A. Crowd stand up at take notice. 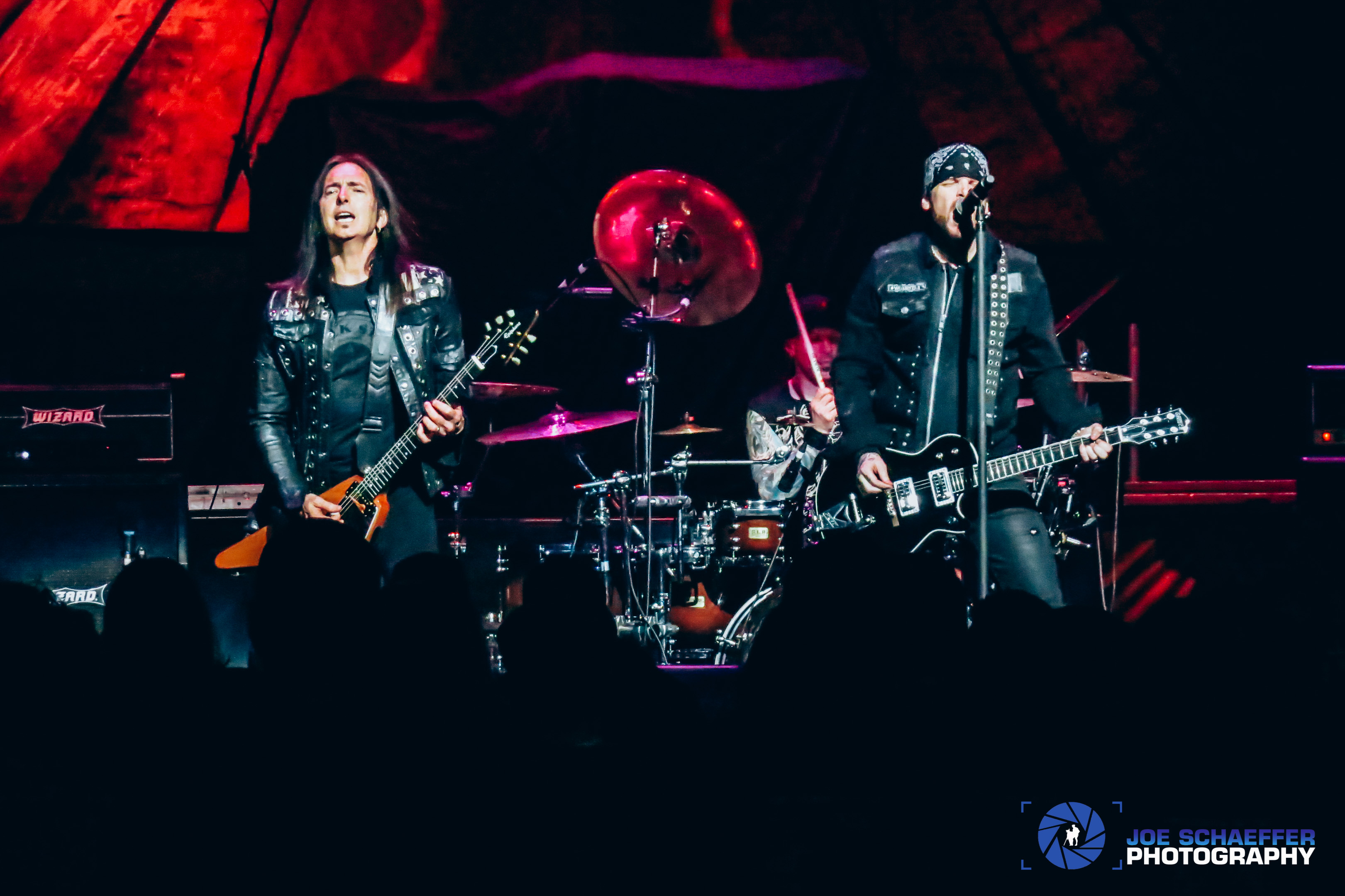 Tonight’s 40 minute set forced the lads into a tight, no time for talk, trip through some of the more popular songs from their 3 album catalog; only straying momentarily for a heavy rendition of Thin Lizzy’s, “Jailbreak”. BSR aptly started the evening off with “All Hell Breaks Loose” from their 2013 release of the same name and kept the engine revving through their entire set. “Heavy Fire” the title track from their latest release was followed by the “Irish, Folk Metal Song”, “Soldierstown” from 2015’s, “The Killer Instinct”. Most of the singles were represented which was able to give any newbies a good dose of what this band is all about. 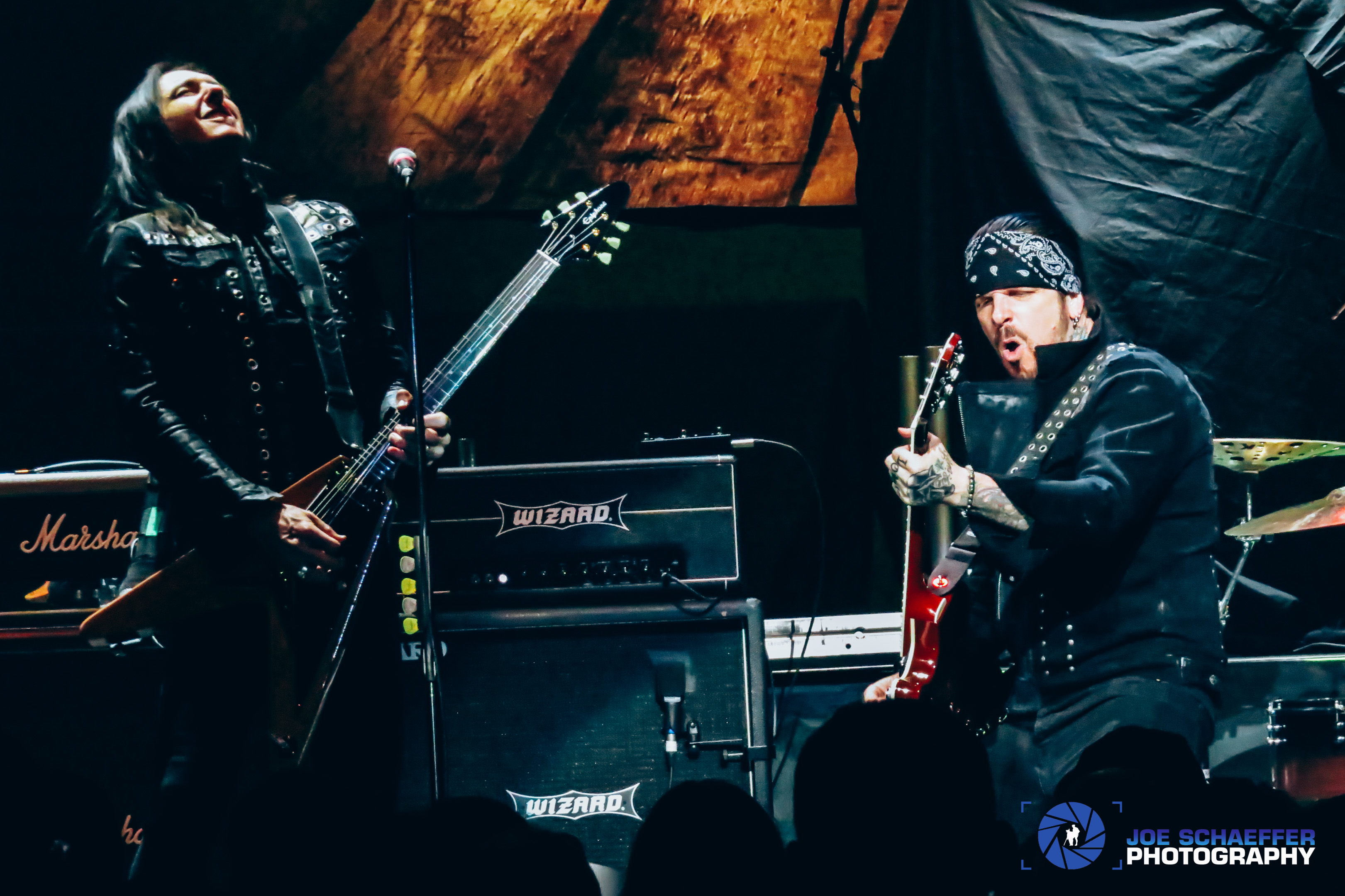 The man at the front from Belfast, Northern Ireland (Norn Iron), Ricky Warwick, brings all the Emerald Isle charisma to the stage when he performs. He does whatever he can in his power to get everyone ready for Saxon and Priest, urging the growing crowd to get to their feet: “All you have to do is stand up!”  Having seen the band a few years back, I feel like they’ve really hit a groove with this lineup. Newest member, Chad Szeliga (drums), is a great compliment to the thumping bass of Robbie Crane. The Thin Lizzy twin guitar sound is preserved perfectly by the team of Damon Johnson and Lizzy veteran, Scott Gorham. 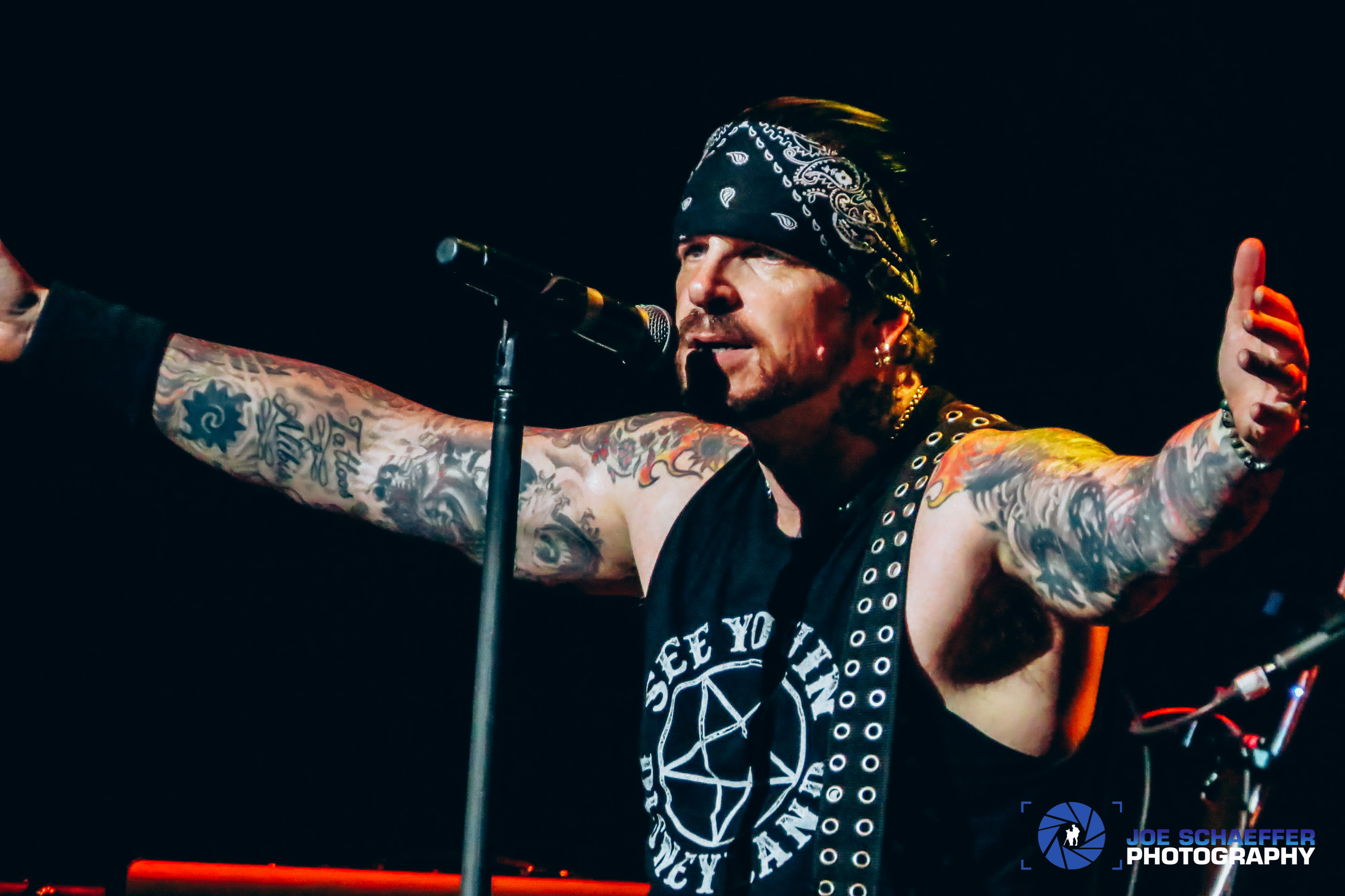 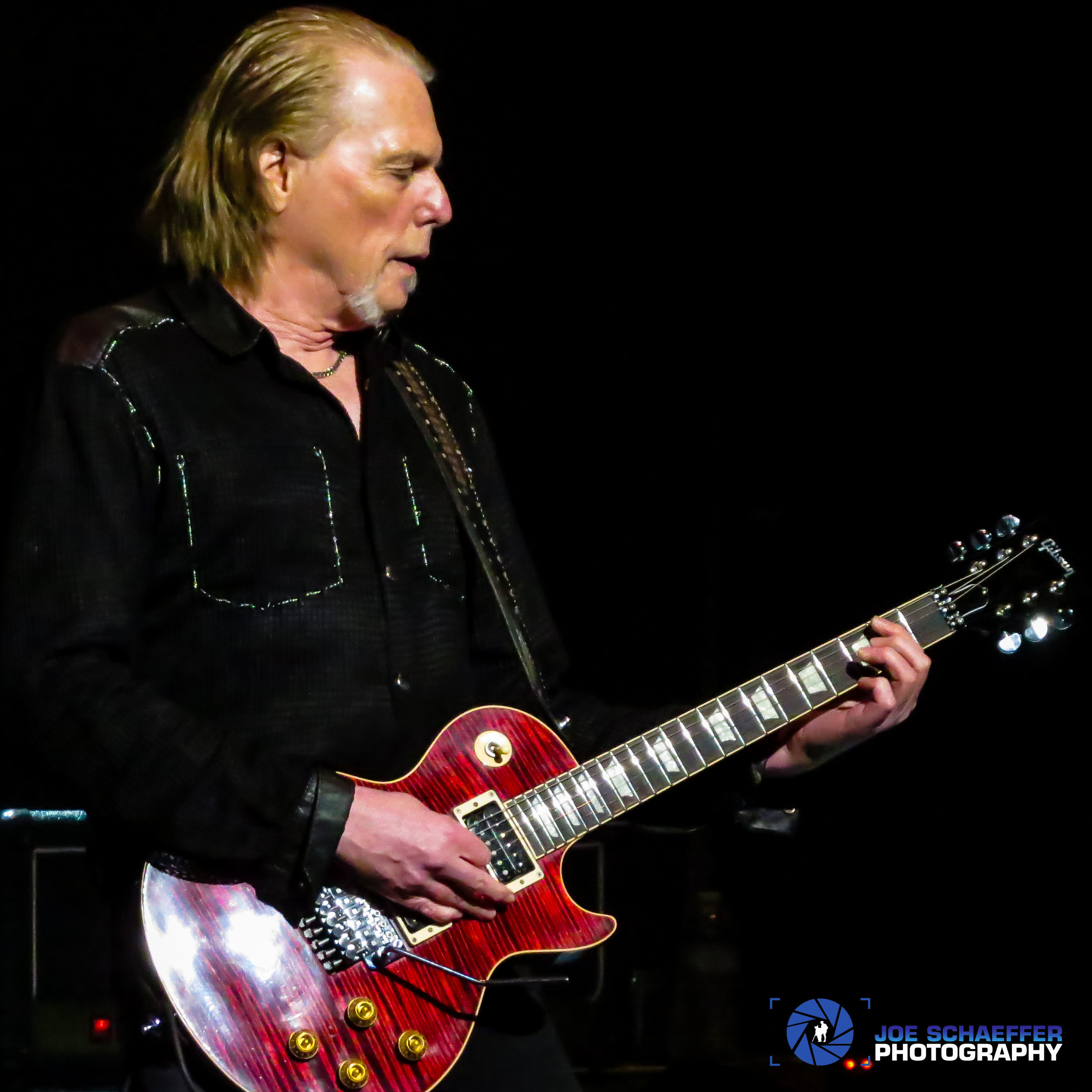 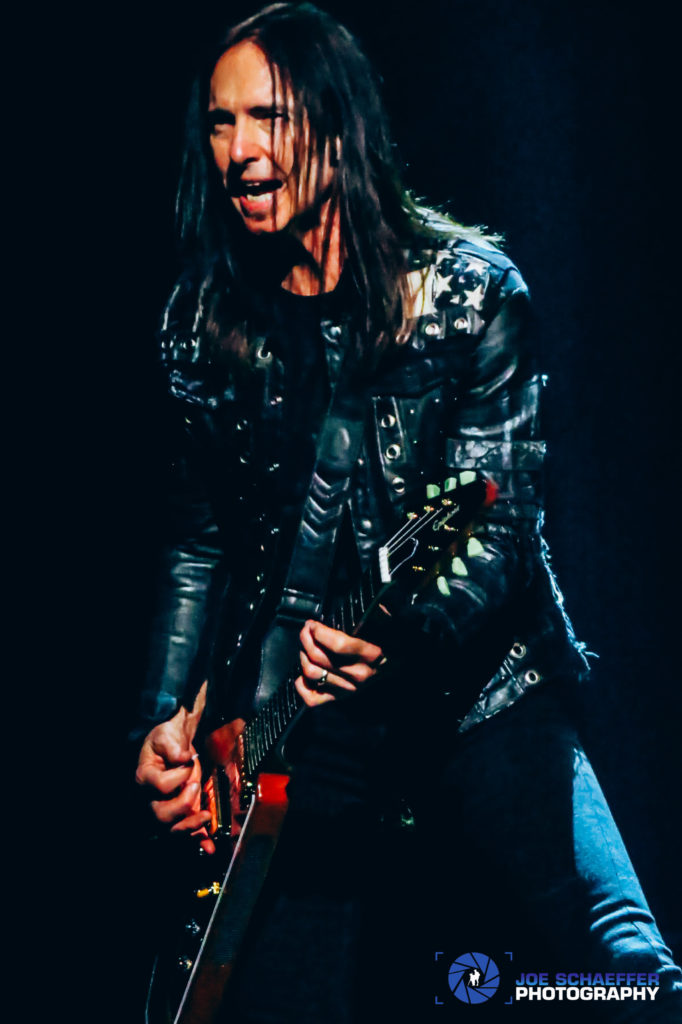 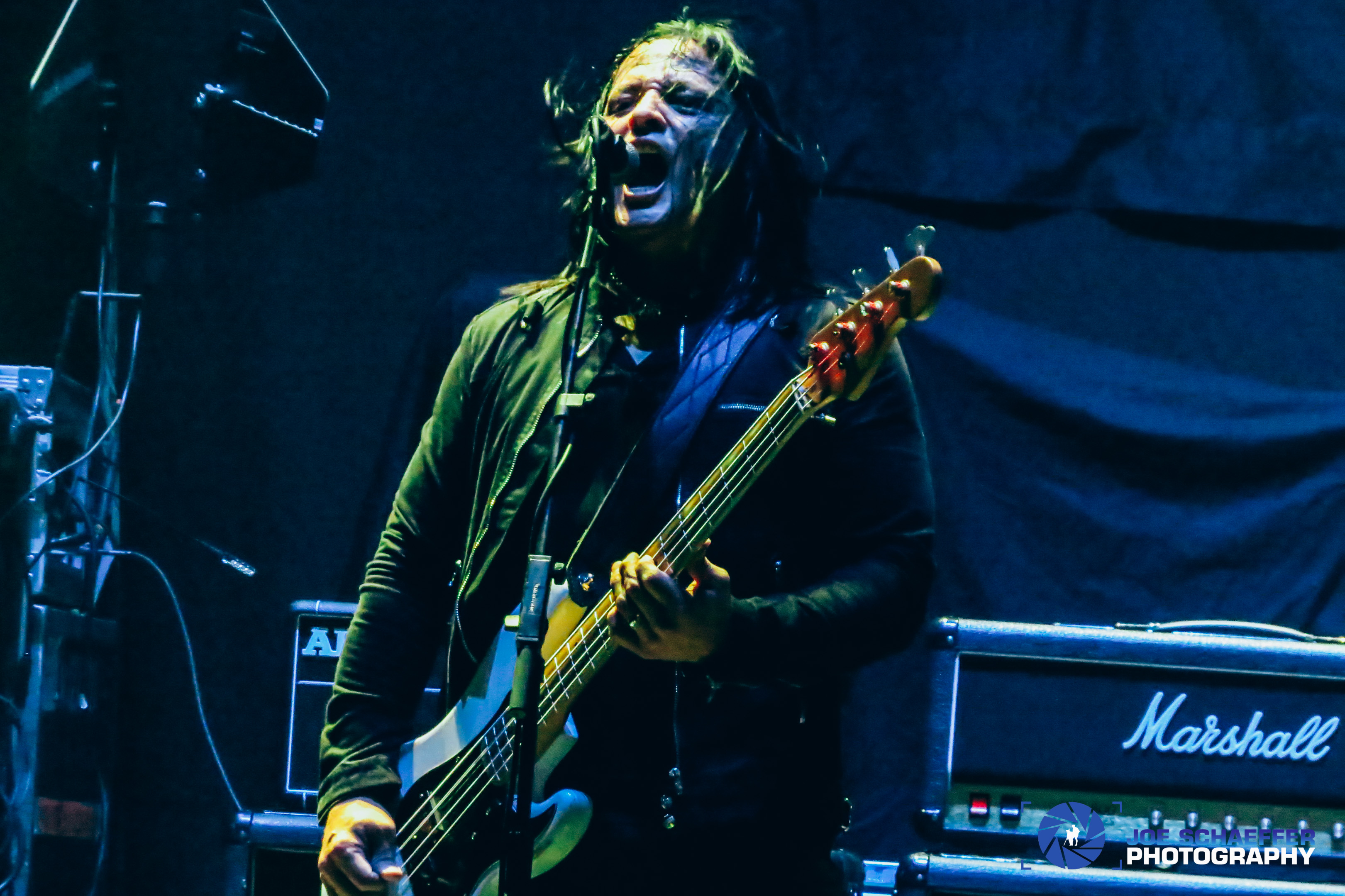 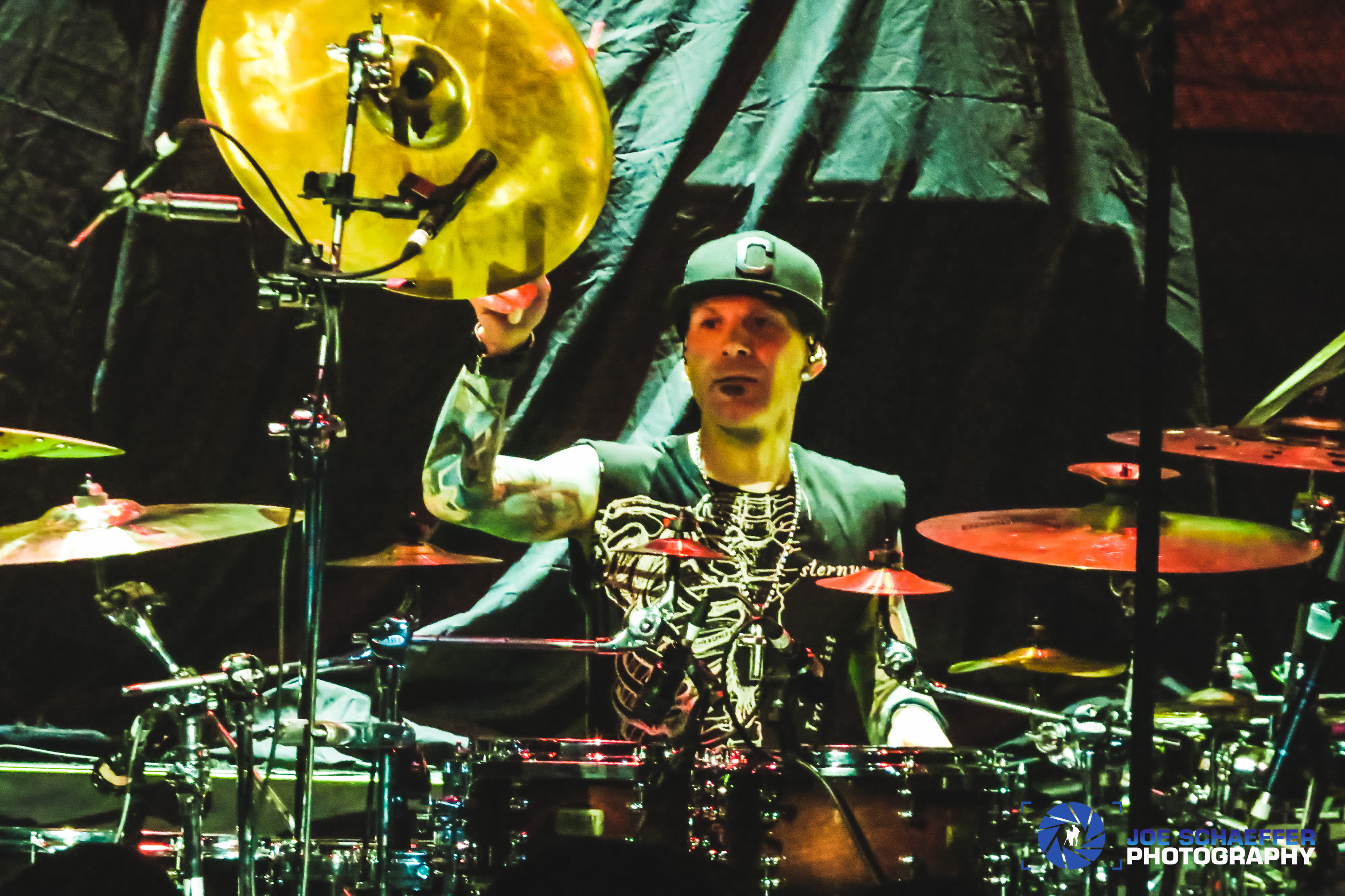 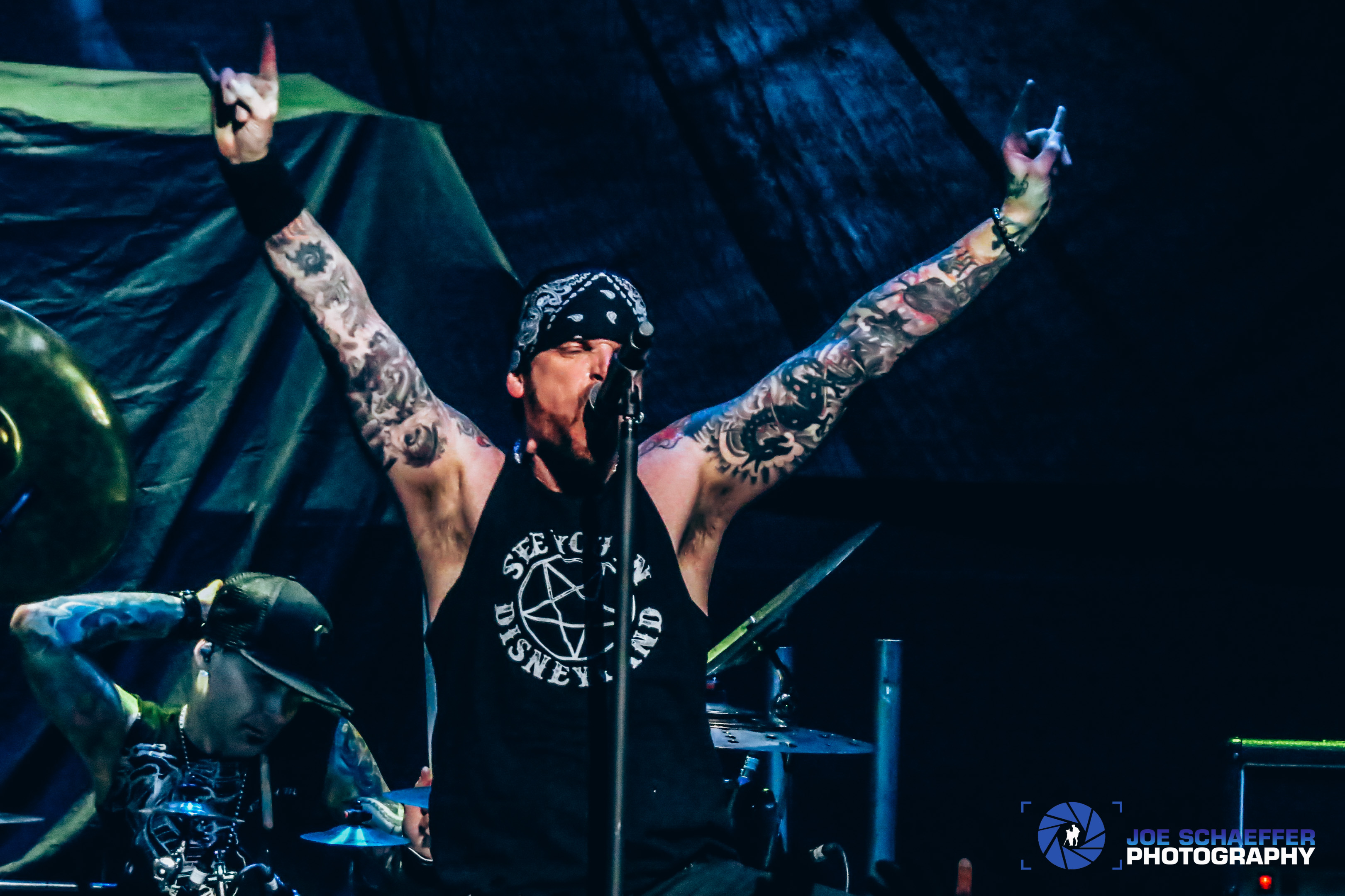 Here’s hoping that Black Star Riders take off on a headlining tour of their own… SOON! 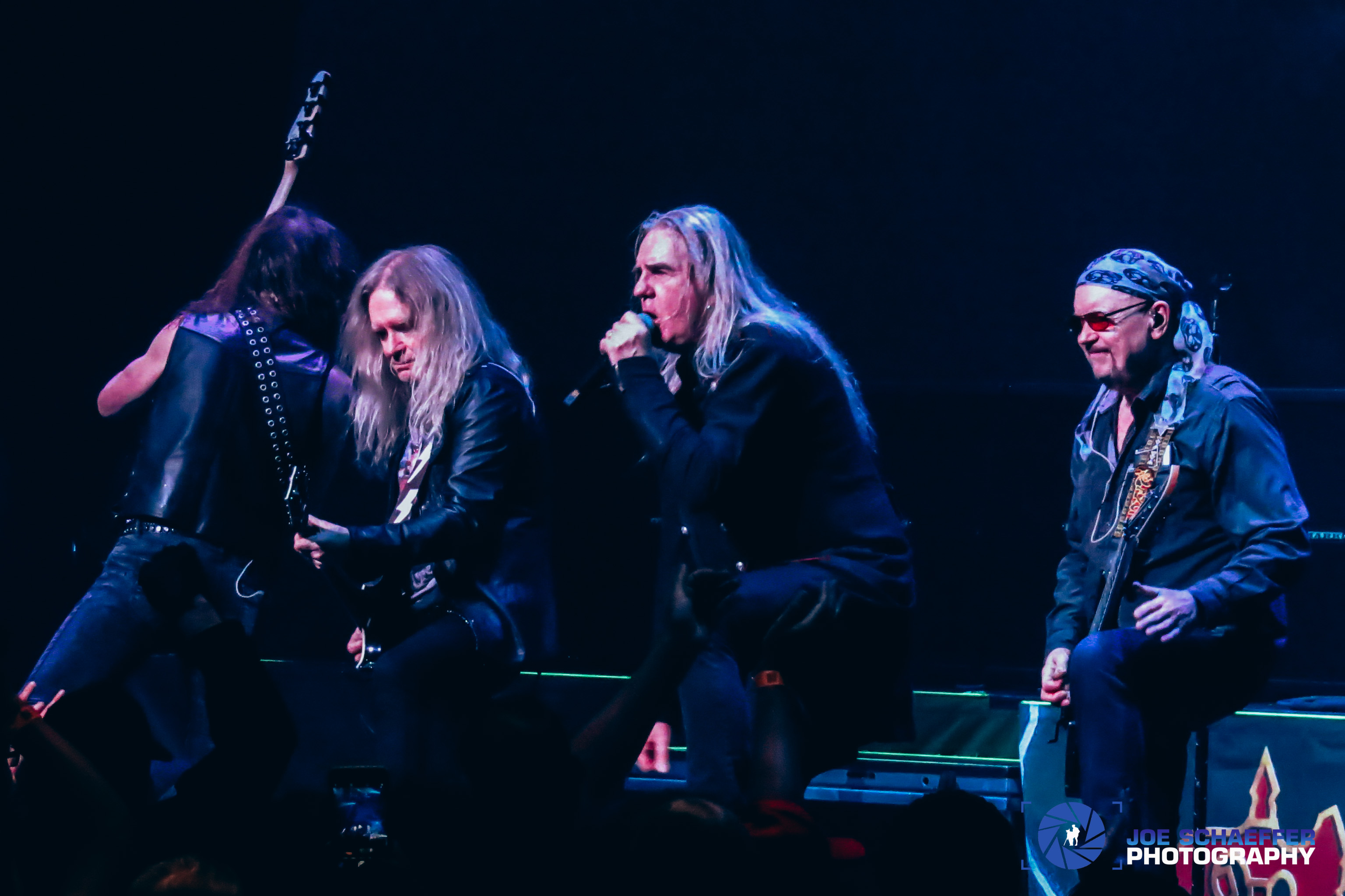 Saxon just get heavier and heavier and better with age.  They’ve strayed a bit on their past few albums from a heavy, melodic rock sound to a full on metal outfit.  Even recruiting Amon Amarth’s growling vocalist, Johan Hegg, to accompany Biff on the song”Predator” from their newest release, “Thunderbolt”.  Nowhere is this more apparent then when these guys are playing live.  Their sound hits you like a…  well…  Thunderbolt. 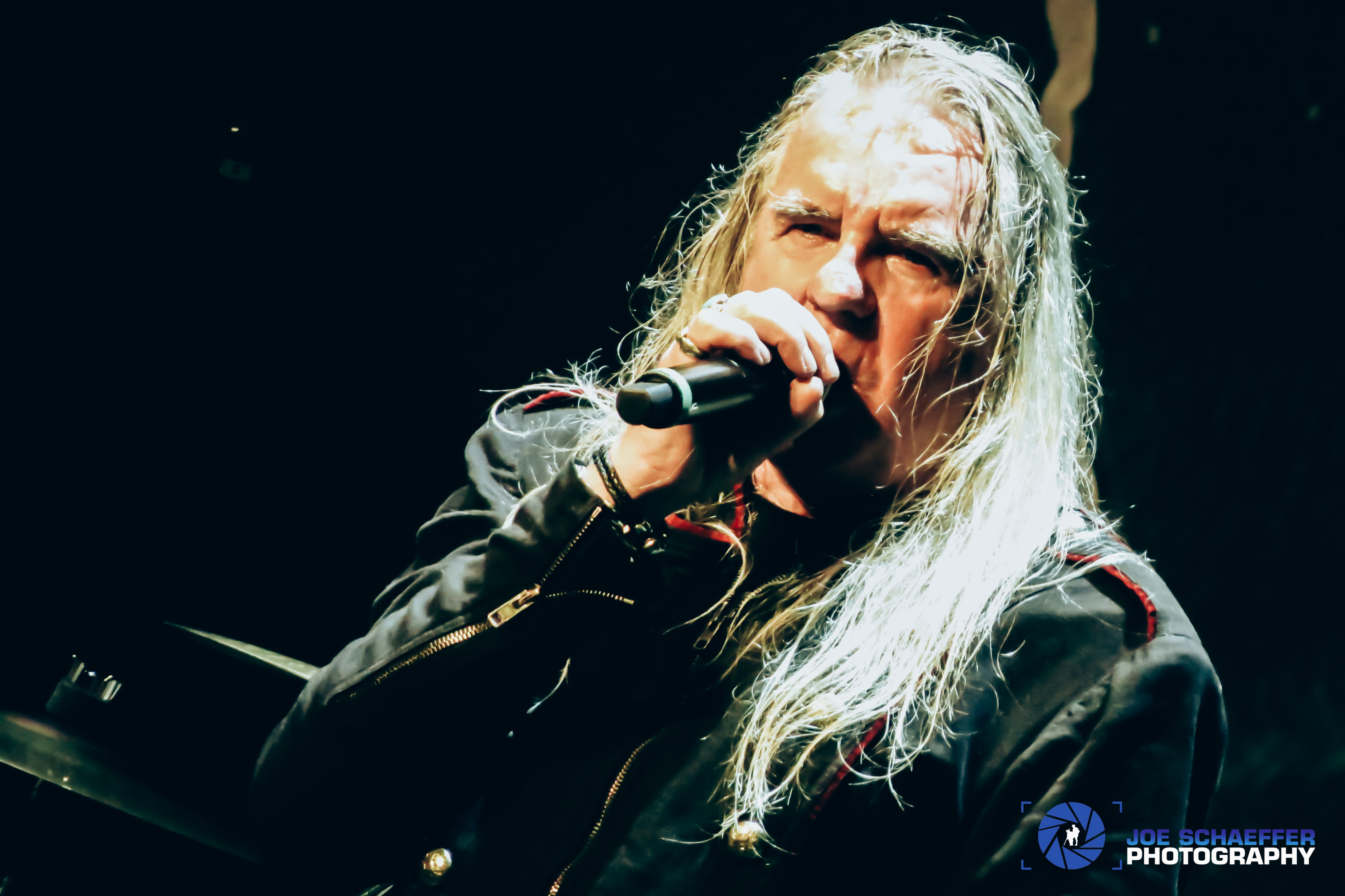 Thunderbolt is one hell of an album and the selection from it played tonight went down a treat. Kicking off with the title track and then straight into “Power and the Glory” was a great how do you do.  “The Secret of Flight” was followed by “Motorcycle Man” and led into “Nosferatu“.  I tried, but just can’t get into this song.  I would have loved to have heard one of a dozen other classics in its spot…but I guess you gotta push the new stuff. 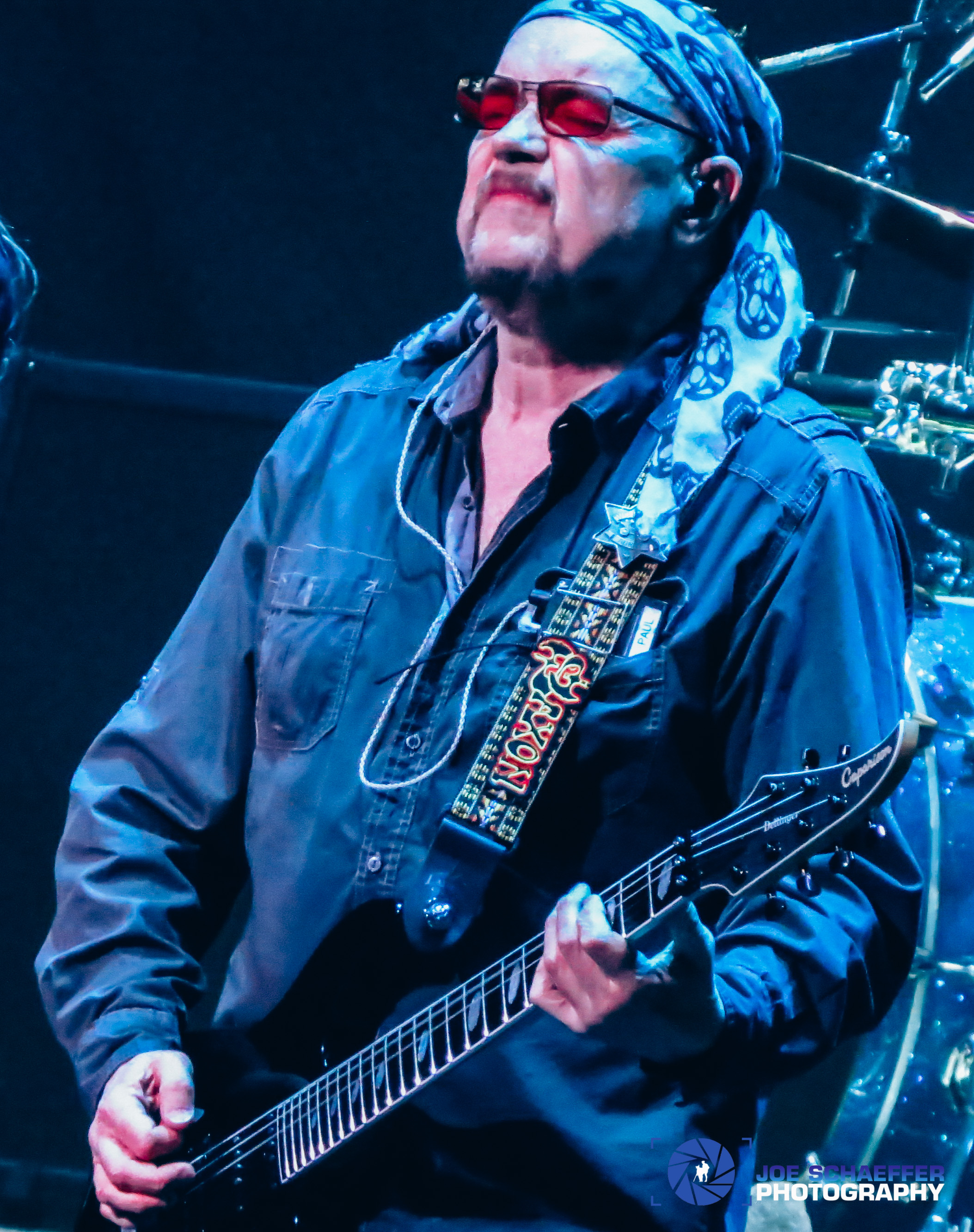 “Dallas 1pm” was followed by Saxon’s kick ass tribute to Lemmy and Motorhead, “They Played Rock N Roll” which led into a bunch of those classics that sent the crowd wild with each opening riff… “Denim & Leather”, “Princess Of The Night” “Wheels Of Steel“… They finished up their 50 minute set with “This Town Rocks“. 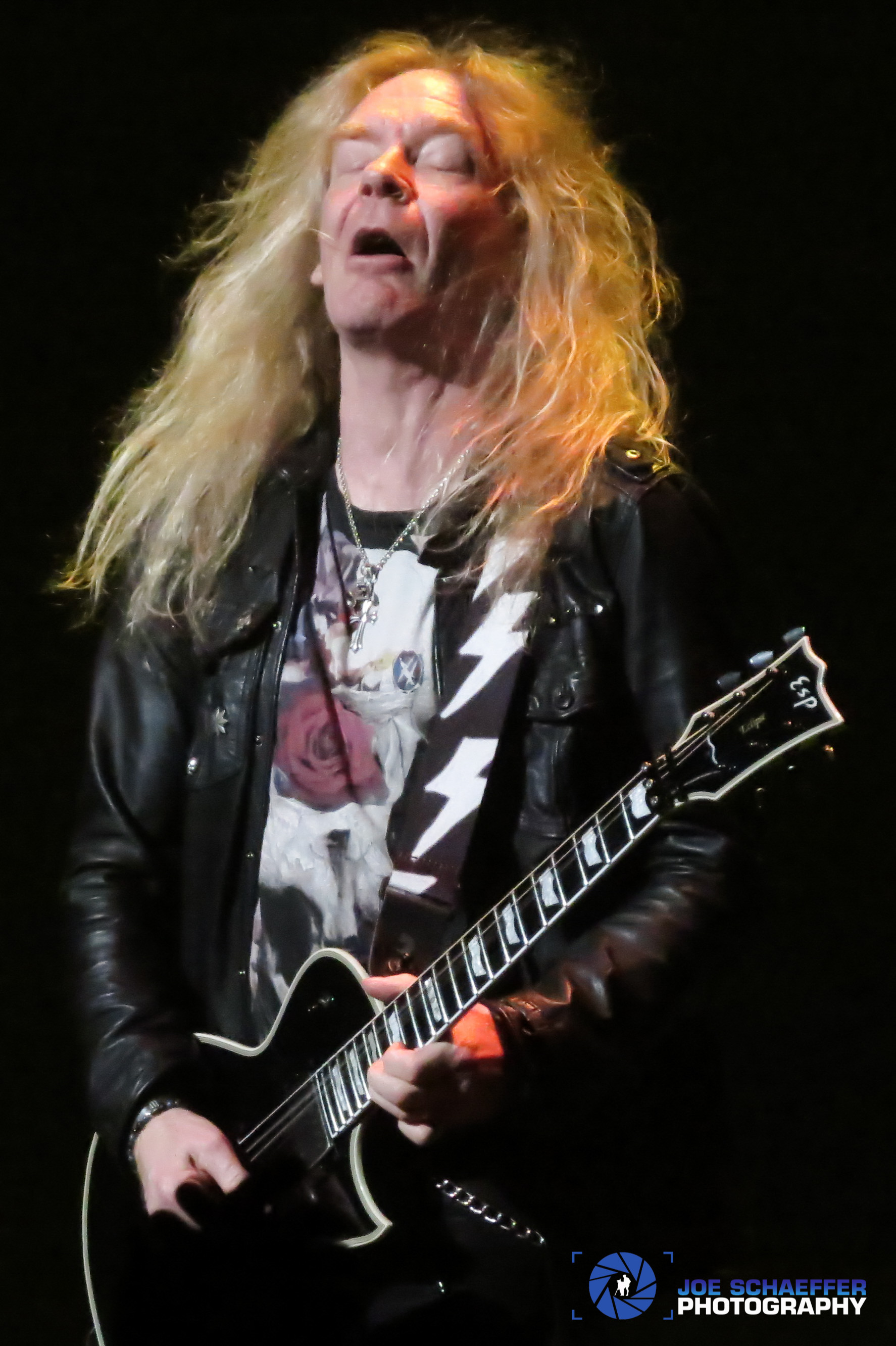 Biff Byford’s vocals are still impeccable.  The silver haired rocker paces around the stage and head bangs like a spring chicken metal head; putting some of the faithful in the pit (including myself) to shame.  Adorned in his stage uniform (military general coat), Biff has metal running through his veins.  Making fists at the crowd, grabbing, wearing and signing some of their cut off denim jackets, during the show, Biff shows no signs of slowing down. Paul Quinn (guitar), Doug Scarratt (guitar) and Nigel Glockler are a steady presence on stage. Nibbs Carter (bass) on the other hand…this dude is a whirlwind.  He was all over the stage, thrashing his head around like a maniac.  Another great performance from this classic band. 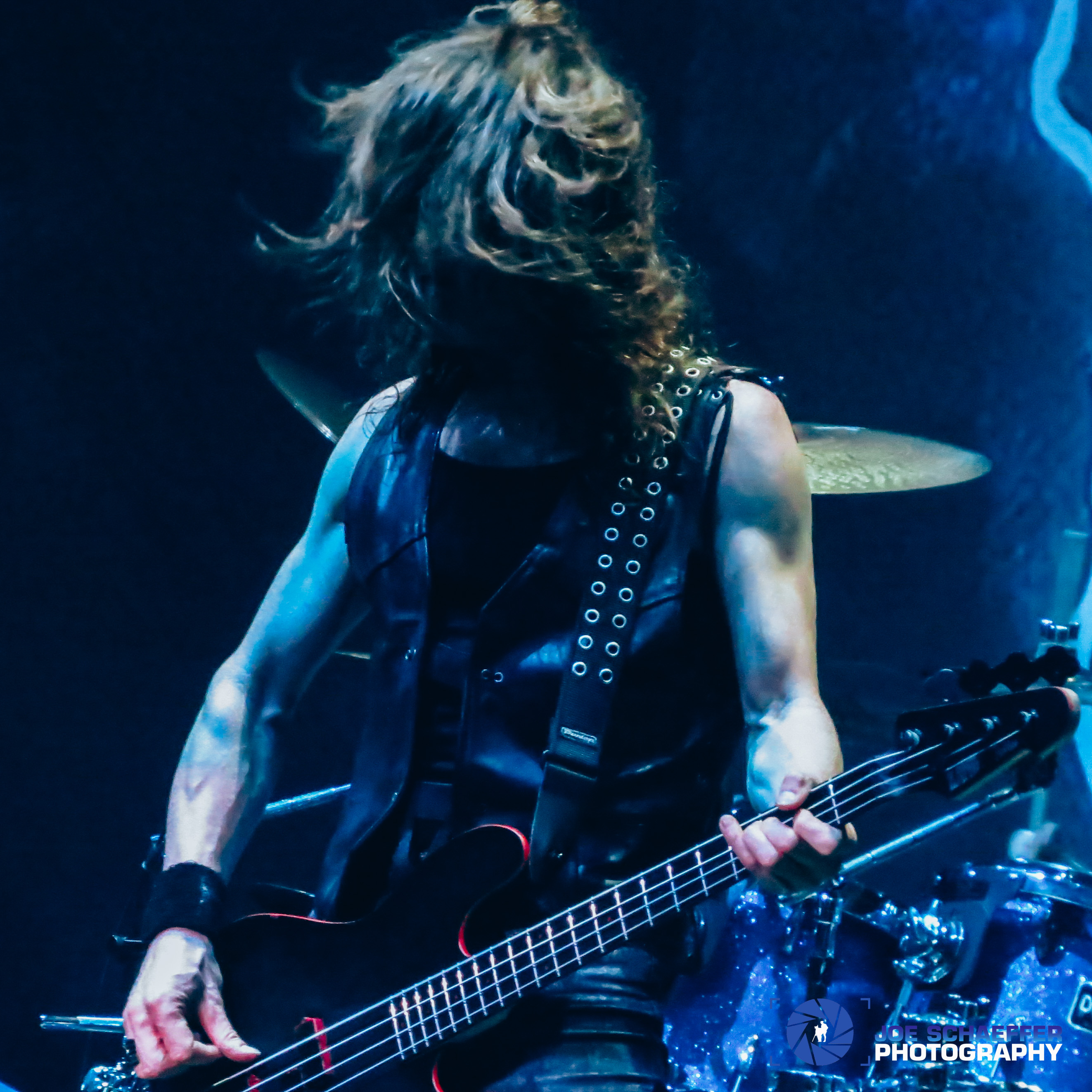 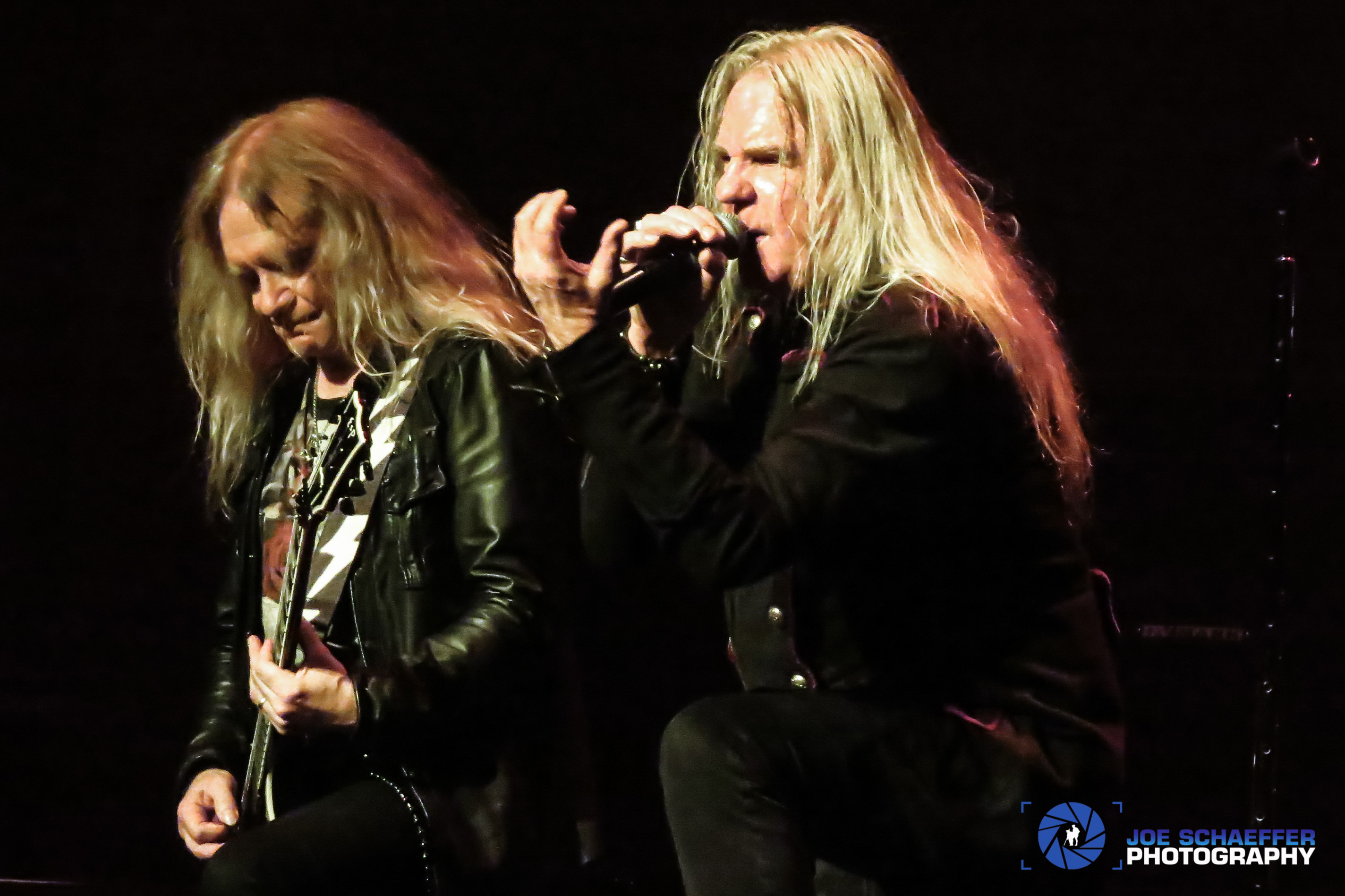 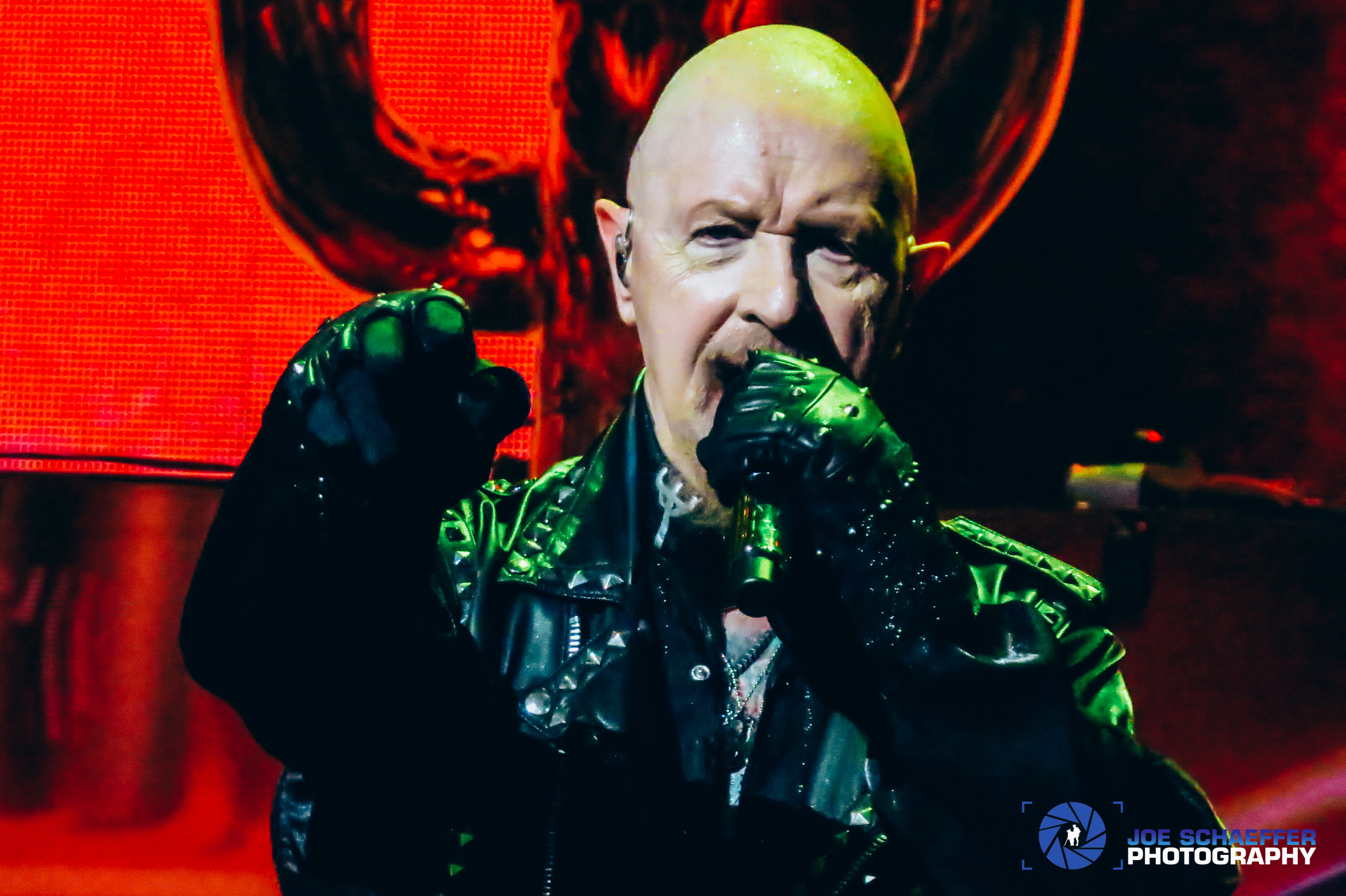 Just a few short years ago there was talk of Judas Priest heading quietly into the night. After 2008’s “Nostradamus” concept album, K.K. left the band and it seemed they were going to fulfill some obligations and call it a day.  Hell, they even released a video called, “Epitaph“. Well, then something happened… The band got a shot in the arm, from a blonde haired Fountain of Youth, called Richie Faulkner. They released 2014’s “Redeemer of Souls” and went out on the road with Richie fitting in seamlessly next to Glenn Tipton.  Fast forward to the release of instant classic, “Firepower” and you have a juggernaut, with (Almost *see below*) no signs of slowing down.  Just like a Judas Priest live show, this album grabs you by the proverbial balls, and demands your attention. 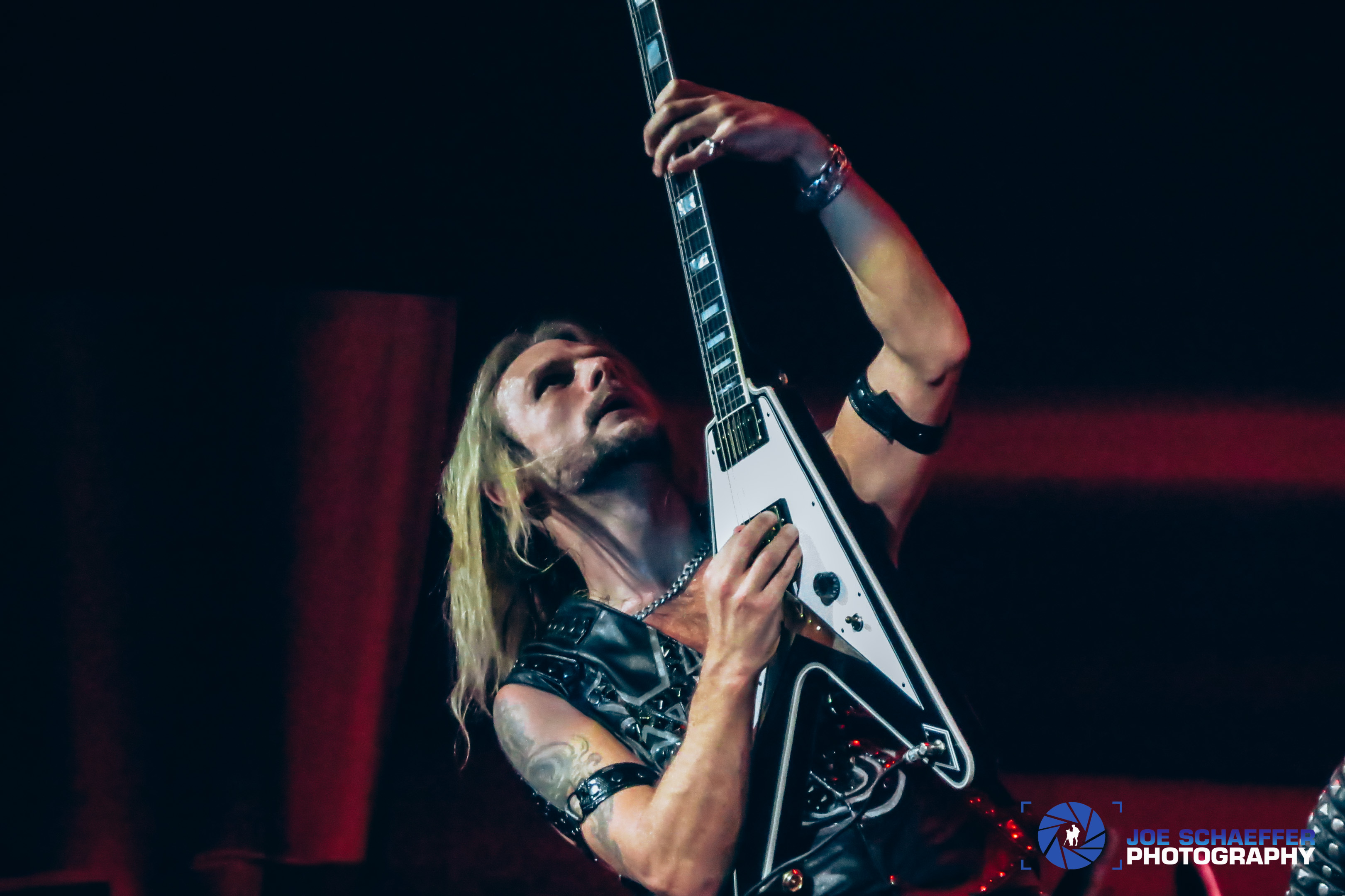 The familiar tones of Black Sabbath’s “War Pigs” filled the theater as the crowd found their voice…The lights dimmed and the taped “Guardians” intro led straight into “Firepower“.  And then Boom! Right into some of the evening’s surprises, “Running Wild” from 1978’s, “Killing Machine“, then after “Grinder” came “Sinner” from 1977’s “Sin After Sin” album. One dude in front of me lost his shit every time a deeper cut was played. Although also excited, the crowd around this guy could not match the intensity of his elation (Sure it had zero to do with the herb that he had fixed to his lips the entire evening).  The new songs are perfect additions to the Priest catalog.  “Lightning Strike” and “Evil Never Dies” are bound to become set staples for as long as this band is around. 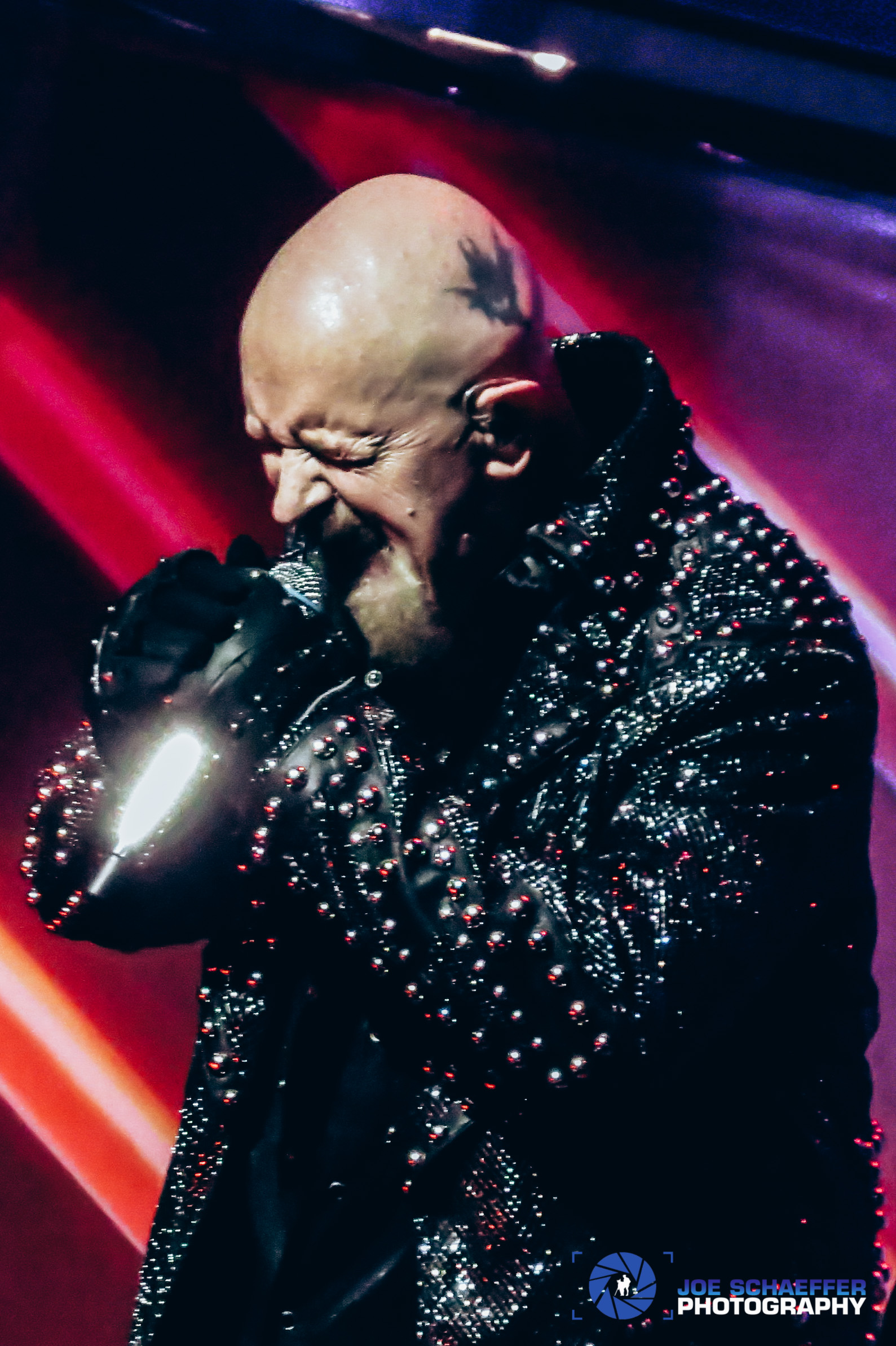 The Man, The Myth, The Legend, THE METAL GOD, Rob Halford still has those famous pipes.  Whatever deal he made with the Devil to keep that scream intact was worth it. Rob stalks around the stage, feeling every note played. Gloved fists pumping along to the music all night, costume changes and of course…that Bike entrance. Scott Travis (drums) makes what he does look effortless. I’ve seen drummers almost bust a vein when covering “Painkiller”.  Scott made it look like a light stretching routine before an exercise class.  Ian Hill anchors the bass, literally and figuratively.  If he moved more than 5 inches from his spot, it was an accident.  That’s not a knock. Ian is amazing, but certainly allows the rest of the band to take the spotlight. I read when the tour first started that “Firepower” Co-producer, Andy Sneap (Filling in for and hand picked as a replacement on this tour by Glenn Tipton) kind of held back while Richie did all the heavy lifting.  I’d say he and they have fallen into a nice groove on this tour.  Andy looked totally comfortable up there;  trading solos and falling right into rhythm with the traditional Priest moves made famous by Downing and Tipton. It’s clear Richie Faulkner has earned his way into the hearts of Priest Fans.  He’s a monster guitar player who has his own style while staying true to his predecessor. He interacts with the fans (on stage and off) and genuinely looks like he’s loving every minute of it.  I saw him more than a few times winking and nodding, making eye contact and pointing directly to fans, making sure that they got picks. He certainly has become a huge part of any Priest show. 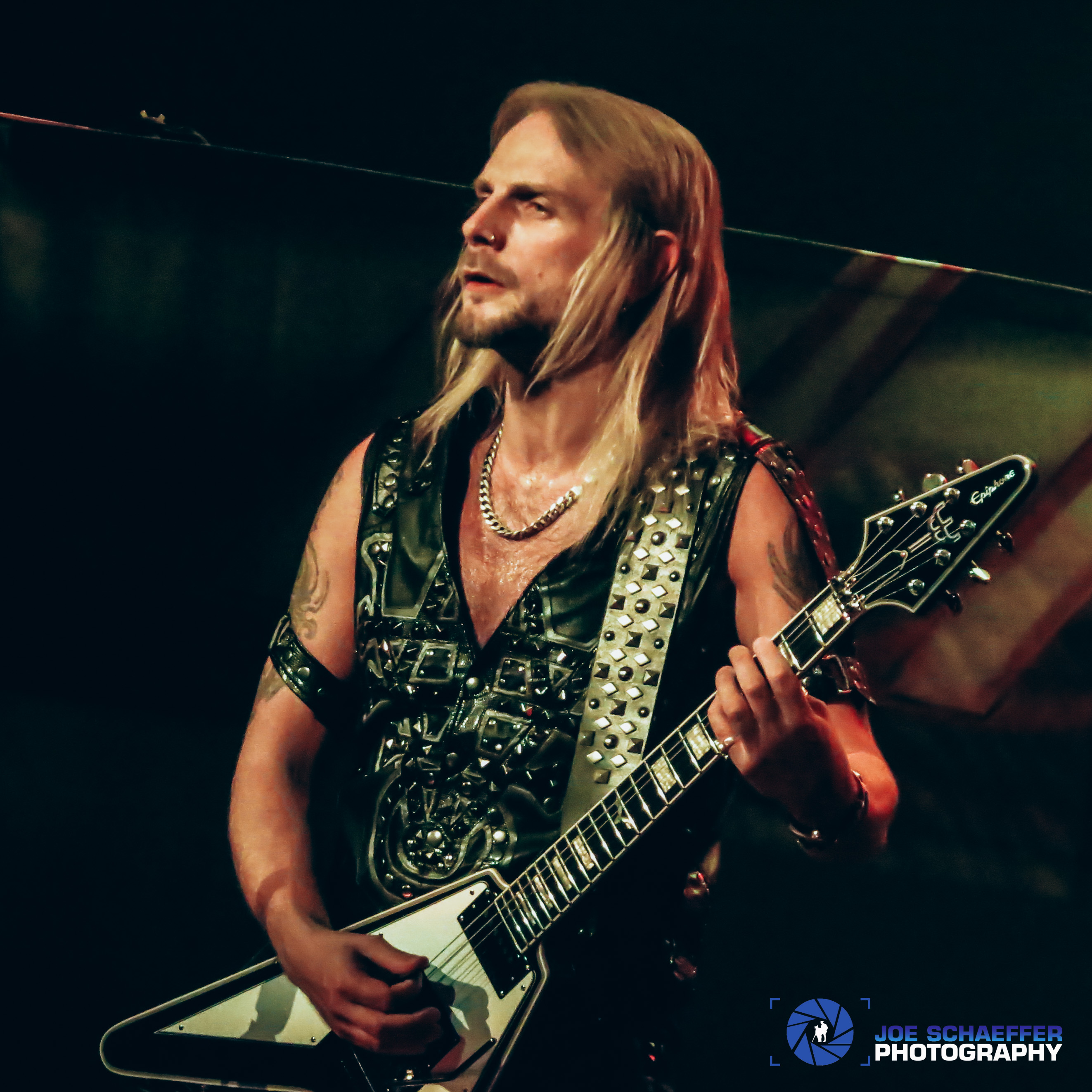 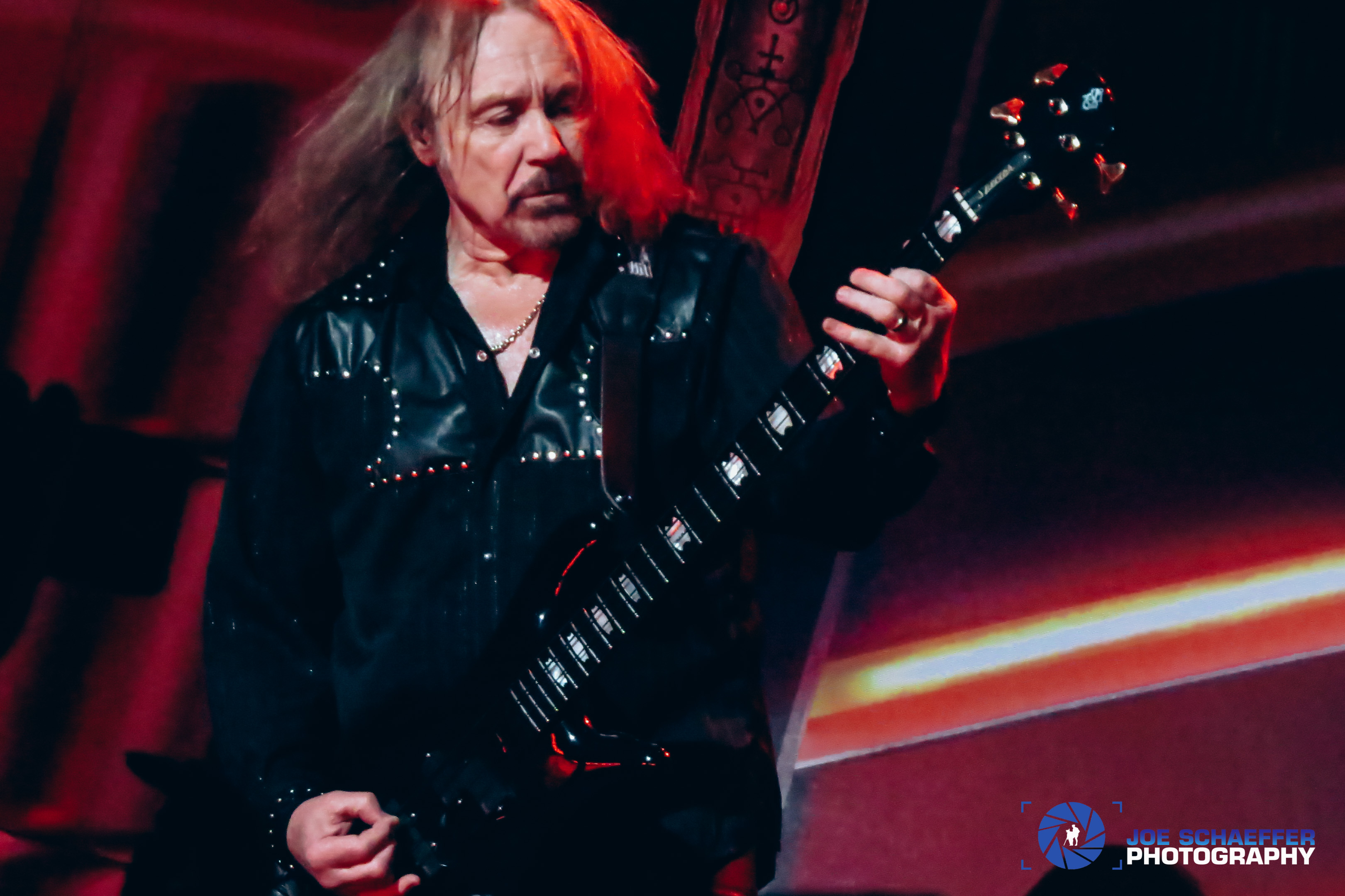 Along with the older songs thrown in, there were also the expected classics: “Some Heads Are Gonna Roll“, “You’ve Got Another Thing Comin’” an awesome version of “Turbo Lover“, “Hell Bent For Leather“, “Hellion/Electric Eye” and my favorite, “Painkiller“. After a short pause, the stage-left curtains opened and out walked Glenn Tipton to a huge roar from the Microsoft Theater crowd.  He’s been showing up at a few shows and I had hoped we’d get to see him.  It was great seeing him up there.  He stayed and played for the 3 encore songs; “Metal Gods“, “Breakin’ The Law” and finally, “Living After Midnight“. 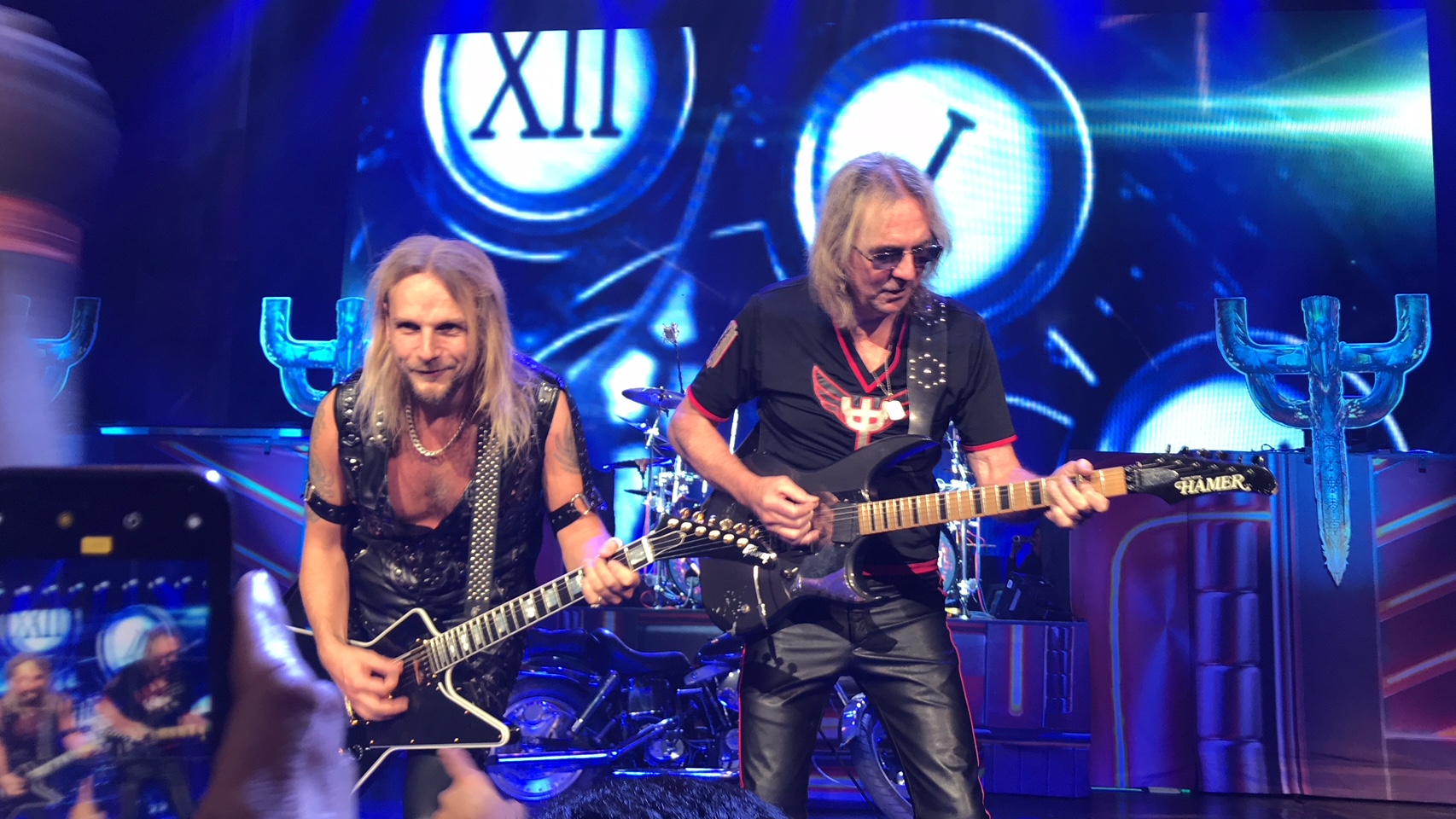 *On to the Almost no signs of slowing down part… A few people pondered about the future of the band without Glenn as a full time touring member. As the crowd filtered out to Queen’s “We Are The Champions” the question of what’s next may have been answered by the words “Priest Will Be Back” emblazoned across the screen. Whether that means they’ll be back this Summer on their just announced tour with Deep Purple, or if it means that they have bigger plans for the future at least gives a glimmer of hope that we haven’t heard the last of this leather clad clan.