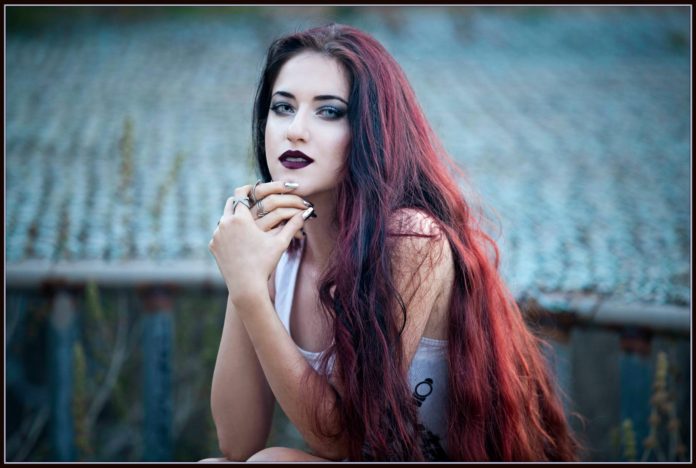 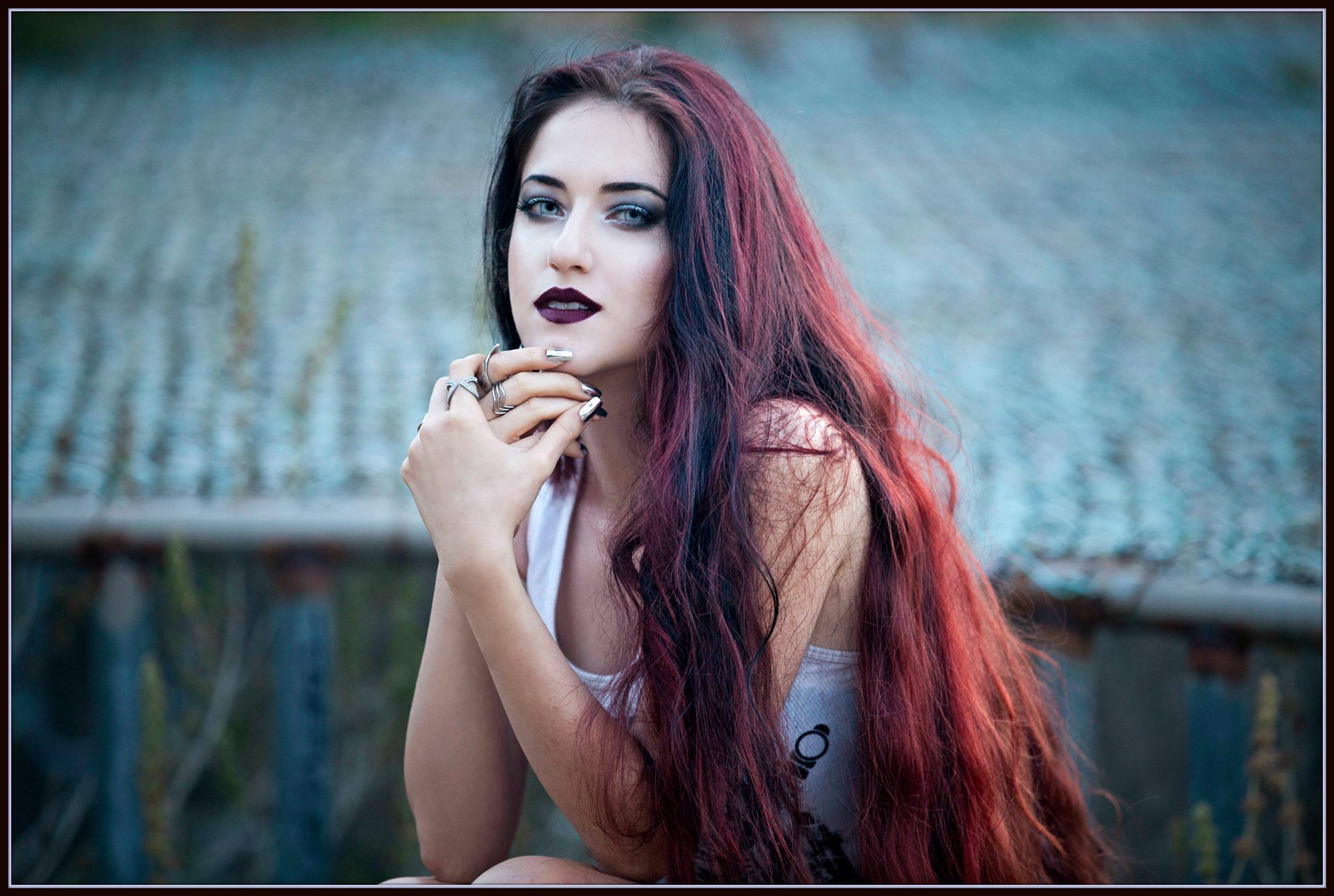 In 2012, Margarita Monet was featured in Metalholic’s “Top 25 Women in Hard Rock and Metal“, her voice described in print and online as “earth-shattering”… really, there is no other way to describe it. I have been very lucky and blessed to have seen Margarita perform live many times. The first mind-blowing thing about her performance is her attention to detail, her costumes, her pleasantry, her energy…and then when she sings… WOW! What you hear from her recordings is REAL, no fabrications.  She hits these incredible notes that just fill the room with AWE!  It’s really fun to watch someone that has never seen her perform live before. JAWS DROP and they turn to their friends and they just stare at each other. 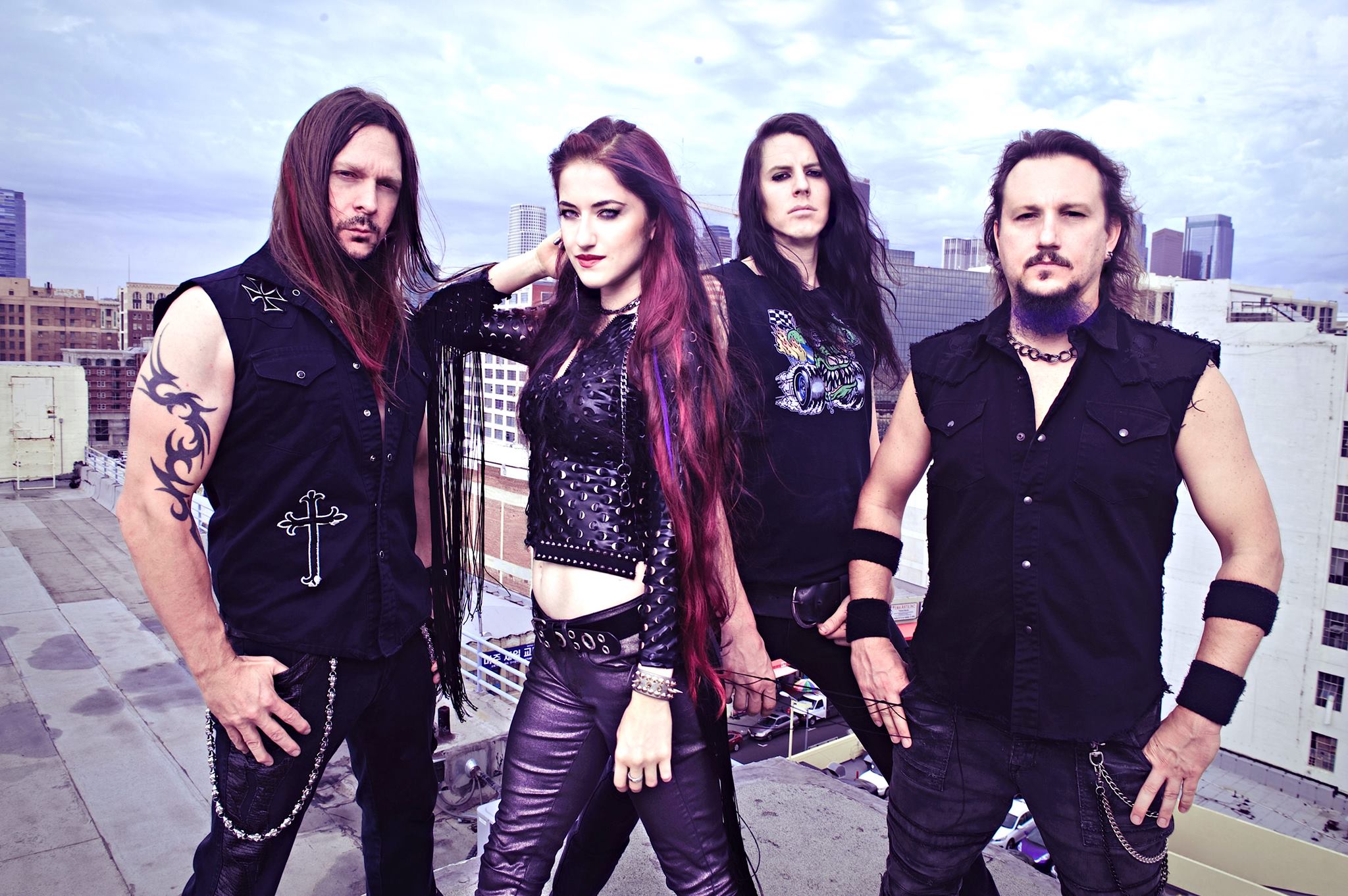 (Edge of Paradise is an American hard rock/heavy metal band that was formed in Los Angeles, California in 2011. The band currently consists of Margarita Monet (lead vocalist/pianist), Dave Bates (guitarist), John Chominsky (percussionist) and Nick Ericson (bassist). The band is known for its heavy guitars complemented by symphonic and classical influences, as well as Monet’s large vocal range).

Living in North Hollywood and spending the majority of my life in the music scene, there are certain artists I just ask myself, “How is this person still a secret?”… I have LOVED watching Margarita perform since the day we crossed paths at Paladino’s in Reseda (CA). For those that have not met her or her incredible band EDGE OF PARADISE, I am so pleased to introduce you to this AMAZING, and very classy lady of metal. 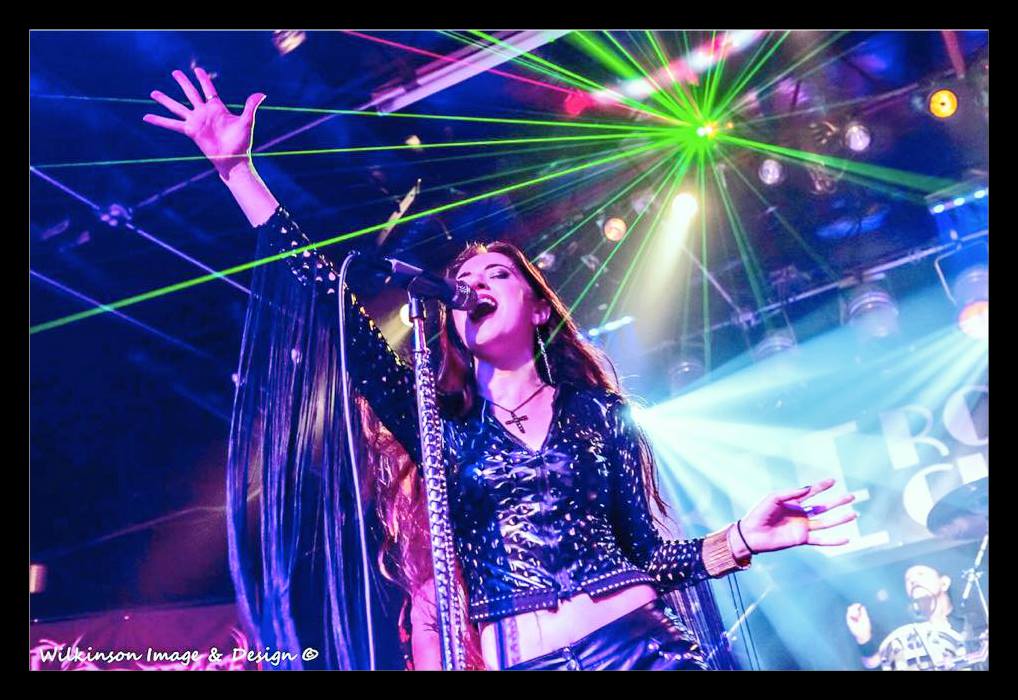 LISA: At what age did you start becoming trained professionally?

MARGARITA: I lived in Moscow until I was 11 and since I was about 4, I attended music school, ballet, theater and everything over there is very serious right away haha! I always knew I wanted to be a performer. And it was my life every day, i practiced piano, went to ballet classes, I used to come home at 11 at night after all the classes and just start doing my homework for school. But i’m very grateful to my family to exposing me to the arts and their support! When we moved to the US, i went to a Performing Arts Highschool then went to NYU for theater and music, so it’s always been my life!

LISA: Do you do anything special to take care of your voice?

MARGARITA: For my voice, I try to take care of it, I don’t drink, smoke, I try to eat healthy, exercise. Your voice is part of your body, so taking care of yourself is important!

LISA: How often do you rehearse?

MARGARITA: If we have a tour coming up we rehearse twice a week, just depends on what we’re doing.  Right now we’re adding songs from the new CD to our setlist, we’ll be rehearsing more, it’s very important to us that we sound great at the shows! Our songs are very layered so a lot goes into trying to figure out how we can sound like the album live, just amped up with the energy of a live show!

LISA: What was it like when RISE FOR THE FALLEN reached over 100K views? Do you remember what you were feeling?

MARGARITA: We’re always trying to move forward as a band, whether it’s by making new content, promoting, playing shows, we’re always thinking ahead so even when we reached 100K we’re like, ok now we gotta reach a million!  But it’s always great to see hard work paying off and people getting exposed to our music. It’s an incredible feeling, especially when you hear from fans saying that our music is significant to them, we love it when others join our world!

LISA: Describe your metamorphis as not only a vocalist, but as a performer since your first video as Edge of Paradise, “Mask”?

MARGARITA: It’s night and day! We were a different band back then haha! I never fronted a band before, and on Mask I was just starting to figure out what i could do with my voice. It was the first year that Dave and I started the band, we had different members, the songs were written before i came into the picture, so it didn’t reflect us at all. But it was a great start for us to build from. I feel that we now have really found our sound, I found my style as a singer, my voice evolved tremendously! Also touring, working with people like Michael Wagener, Chuck Johnson, Mike Plotnikoff, Jay Ruston…the new music is a whole new level for us. I feel like we really have become a solid band. I’m very proud of how far we’ve come!

*Released on September 15, 2011by Melrose Music Studios. It features a rhythm section consisting of Gregg Bissonette on drums and Tony Franklin on bass.

LISA: How did you initially come together with Tony Franklin (Blue Murder, The Firm) and drummer Greg Bissonette (David Lee Roth)?

MARGARITA: I had never actually worked with them. It was Dave, our guitarist, who had a band with Robin McCauley singing and Tony Franklin and Greg Bissonette as the rhythm section. They recorded a bunch of songs that Dave never released. Robin got a gig touring with Survivor and the band kind of drifted apart. So when I met Dave he was looking for a singer and we a had similar vision so we took those songs and put out our first CD Mask.  I didn’t write any of the songs which is why it sounds so different.  It was a stepping stone for us. But Tony and Greg are phenomenal musicians and we’re very lucky to have had them on our debut CD! 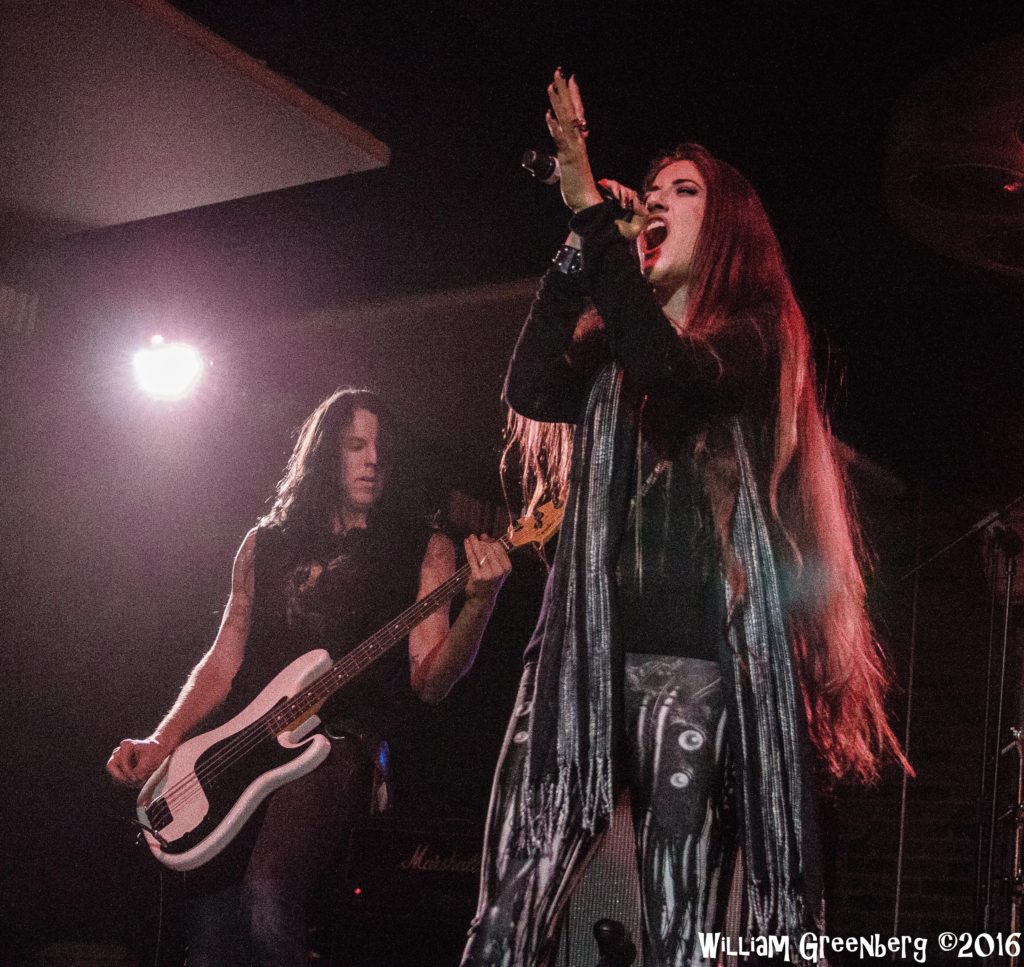 LISA: “In a Dream” is just an INCREDIBLE power-ballad that just.. to me is MINDBLOWING! Who wrote it, put it together? How did this inescapably powerful and magical song come to be?

MARGARITA: “In A Dream” was actually the first song that Dave and I wrote together! We were at a weird place, we were struggling to find our sound and just didn’t know which direction to take the band. Dave came up with that first guitar melody and chords for the chorus, I remember he left for the day and I finished the whole song by the time he came back, it was one of those songs that just wrote itself, we immediately knew it was something special and we wanted to get someone great to mix it, that’s how we started working with Michael Wagener!
I really love that song as it kind of signifies the birth of Edge Of Paradise! But wait till you hear the ballad on this upcoming CD ALIVE, coming out March 10, the song is called ‘Mystery!”

LISA: When did you meet Michael Wagener? What is it like having that amazing support? What have you learned the most from him that you would like to share with fellow musicians?

MARGARITA:We started working with him when he mixed In A Dream in 2013. He was so inspirational and such an awesome person, he produced all the biggest bands that we grew up listening to. He’s really an idol and we wanted to do the whole CD with him! First time we met him we were on tour and stopped by his incredible studio in Nashville, and after that we did everything we could to be able to come and record Immortal Waltz! It’s all about the music with Michael, and he really understood our sound and it was just really inspiring to be able to work with him.  He is so down to earth! One thing we learned is that whatever you do, you do it for the song. It doesn’t matter how simple the part is, you gotta do what the song needs! 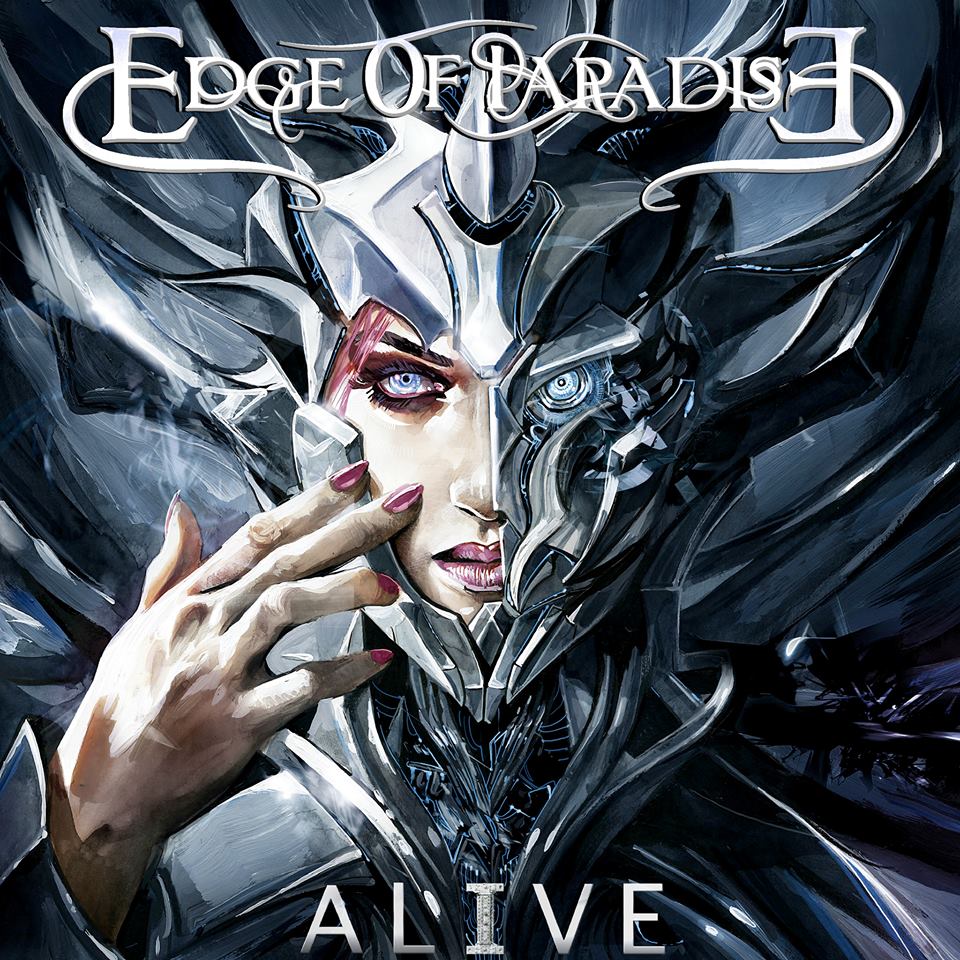 LISA: Where did you film your new video for ALIVE and what was your favorite part of recording and filming this video?

MARGARITA: In the dark alleys of downtown Los Angeles. And in a garage haha! We financed this ourselves so we needed to be as creative as we could on a small budget. We also didn’t want to have another video in an open space or a warehouse.  We wanted something different and something that could reflect the underlying meaning of the song. I went to home depot and bought a bunch of metal sheets and pipes, ordered some lab supplies and and we tried to make it look like some creepy lab! I love being creative and making my own outfits and becoming another character or just embracing my many personalities haha! In this case it was fun to be an android created in a lab who desires to be alive and i think the rest of the guys enjoyed being mad scientists.

LISA: What advice would you give those just starting out in music, what is the best use of your time when trying to get your foot in the door?

MARGARITA: Your music has to speak for itself, invest in your content, in the quality of your sound, if you have a great product you will get your foot in the door! Of course it’s important to promote, and that takes a lot of money too. If you’re an independent band you gotta hire your own publicit, but if you don’t have great content to promote you won’t go very far, so I would say make the music that’s authentic and you’re really proud of and you’ll find your way! 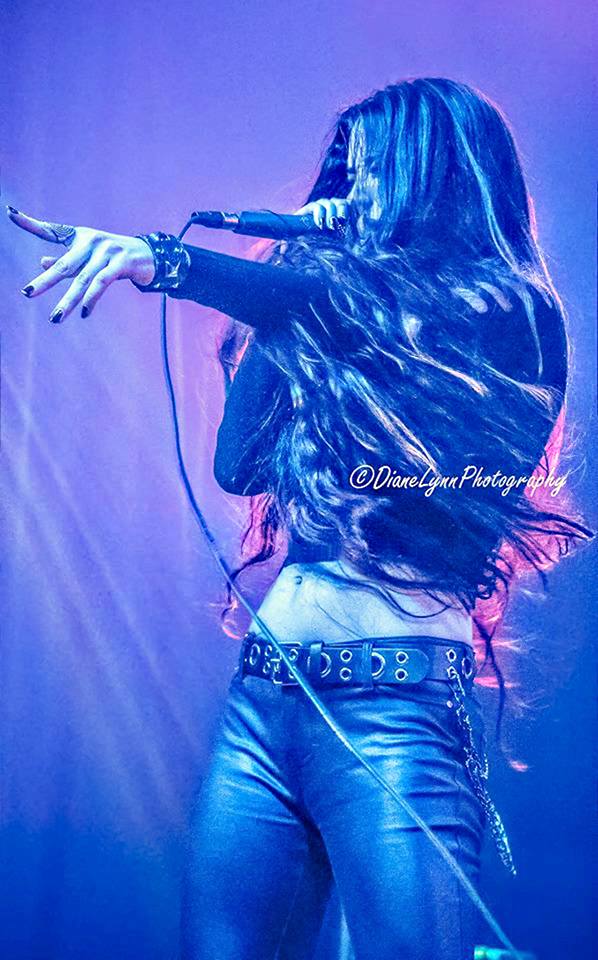 LISA: Where can we see you next? Any tour dates?

* Edge of Paradise are part of Rockers Against Trafficking, a foundation created by Kevin Estrada to raise awareness about human trafficking.