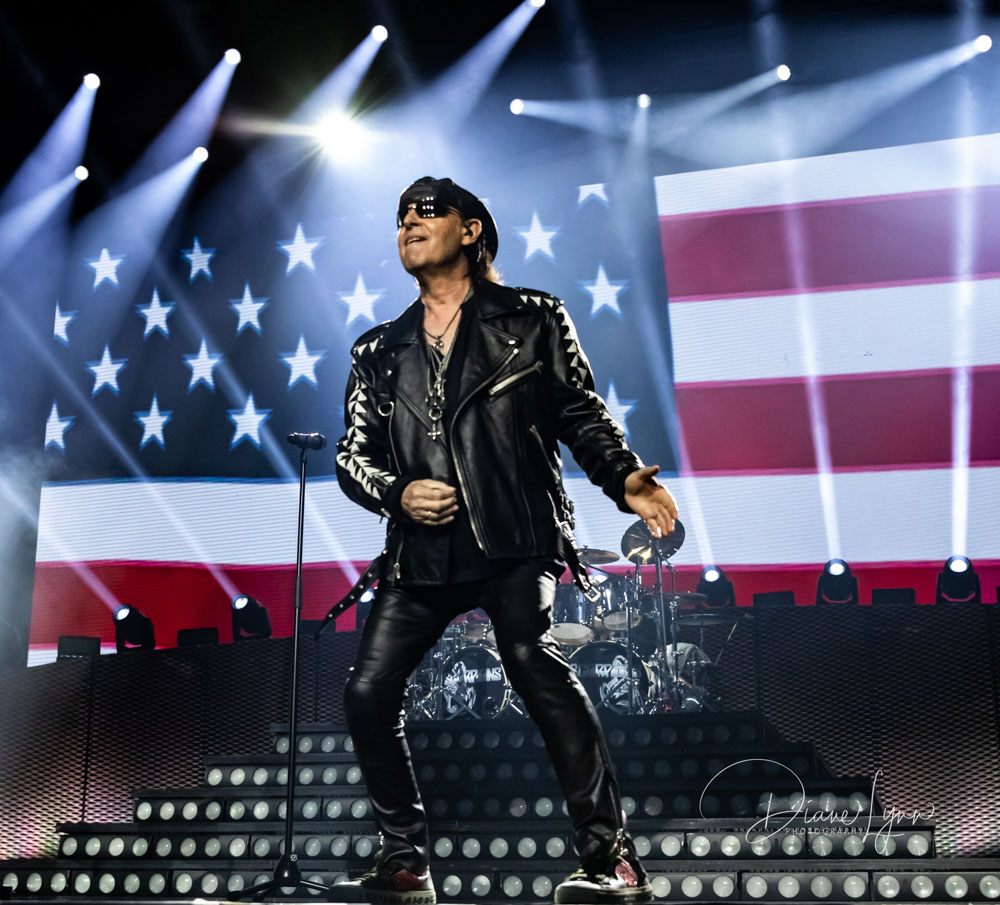 So. Cal. Rock Believers came together by the thousands to see one of the most iconic heavy metal rock bands, the Scorpions.

Even with it being a “school night” the loyal and eager fans couldn’t be stopped from attending this show, it’s been a few years since the Scorpions were in the L.A. area and the fans were ready!

The Kia Forum parking lot was filling up quickly when I arrived. In the distance you could hear the sounds of classic and newly released Scorps songs being blasted by the fans as they tailgated before going in for the show. I always love this happy pre-show, feel-good atmosphere. 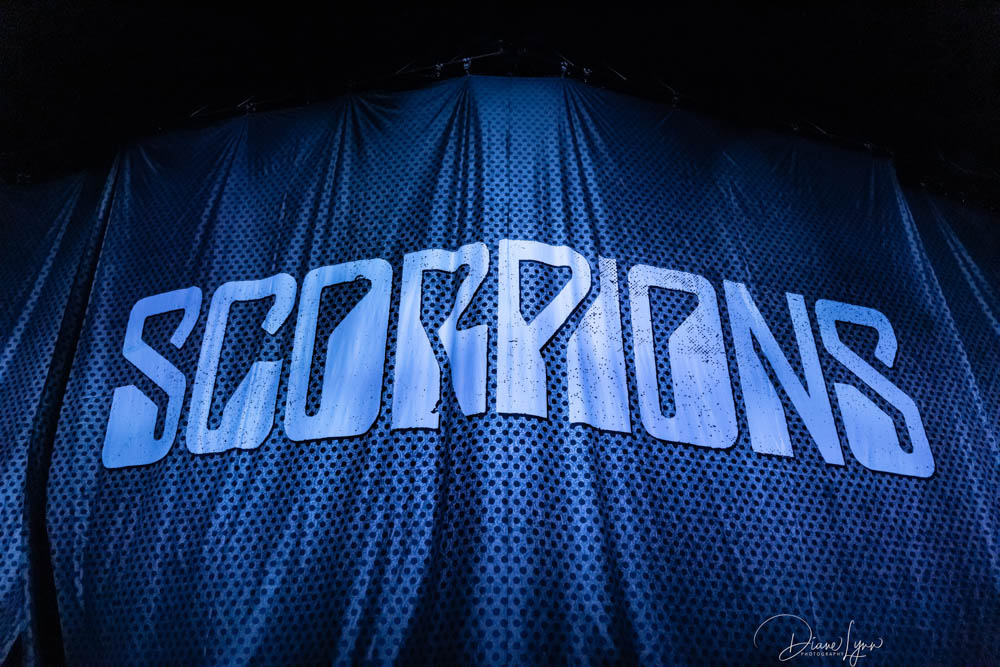 I last saw the Scorpions in 2004 with Tesla opening. I scored front row seats and I can’t forget how amazing that show was, now almost twenty years later with a slight change in the lineup the Scorpions still put on an incredible show! Just a tidbit, this band formed in 1965! Let that sink in for a moment!

As show time approached, the photo crew was given their instructions and brought into the pit, the excitement level was high for me as I’ve been a big fan of the Scorpions since the early eighties. I positioned myself at the tip of the catwalk. As I looked around the arena, I could only see smiles on the faces of the dedicated fans. Then the lights when out and the giant “Scorpions” curtain was illuminated, and the sound of the cheers became almost deafening. Once that curtain dropped it revealed another one with “Are You Ready To Rock” on it along with a silhouette of the band. The energy went through the roof!

The band went straight into the fast-paced “Gas in the Tank“ from their newly released (2022) album Rock Believer. Then reaching way back to their Animal Magnetism album they slowed it down a bit with “Make It Real” then immediately into the mega popular “The Zoo” from the same album. 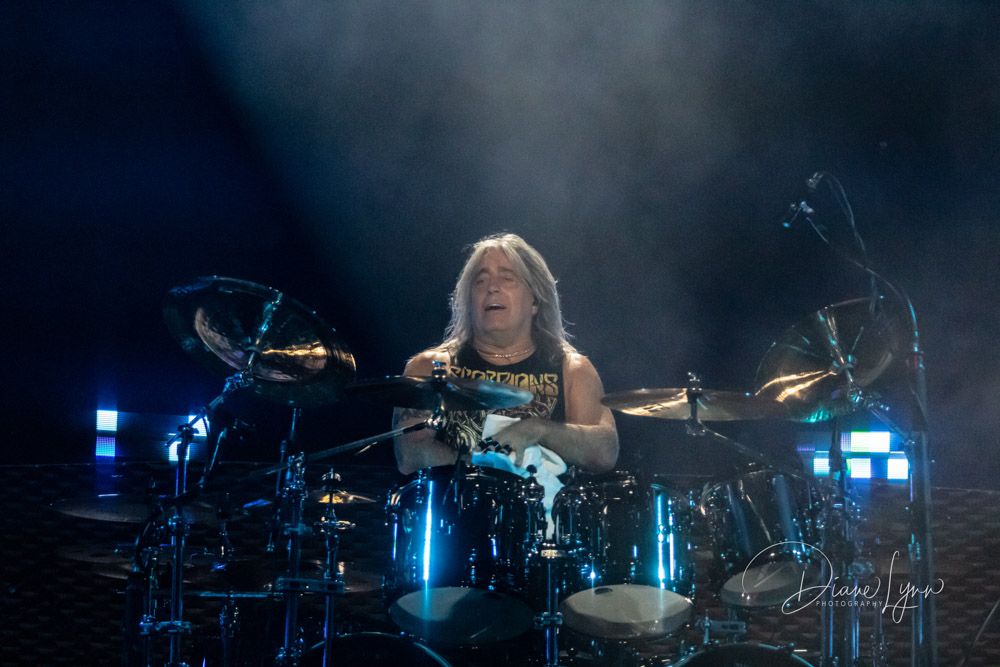 My time in the pit was nothing short of a workout but chasing rock stars is what I love! These guys were movin’ and rockin’ and having fun! The band made use of every bit of the stage, and they were very photog and fan friendly. Klaus, Rudy, Matthias and Pawel made sure to give us photographers a nod, a point, a smile and a pose when they could, it sure was a nice change of pace! 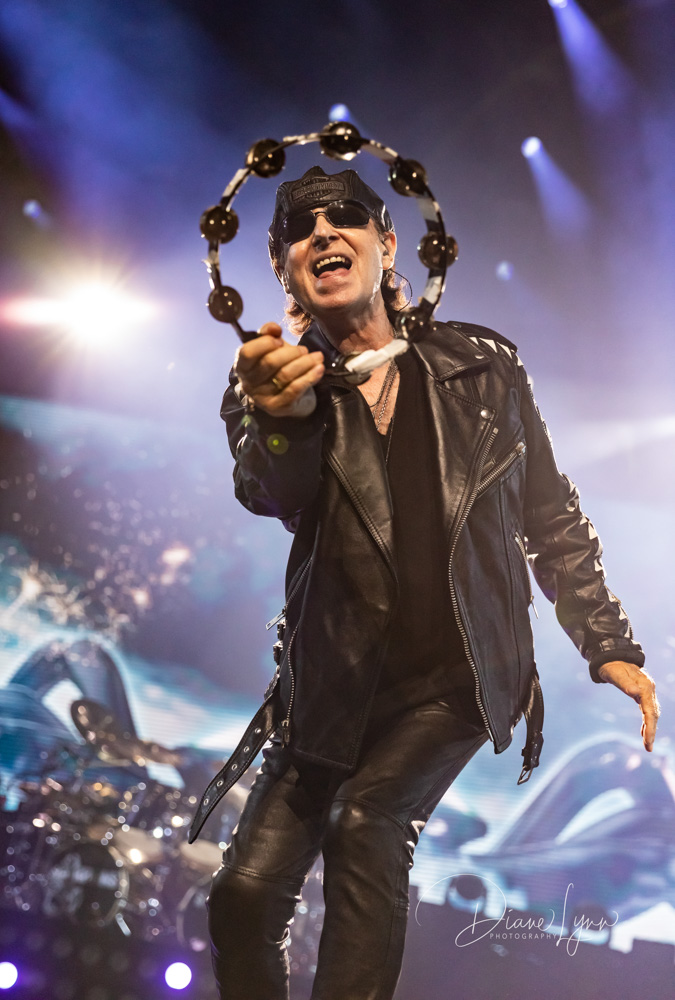 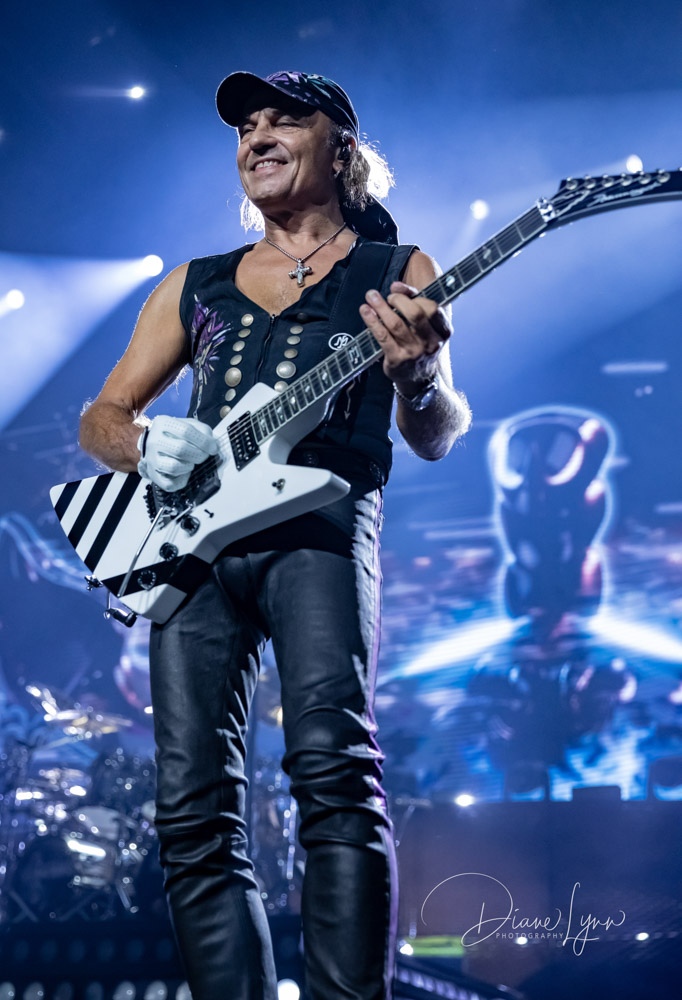 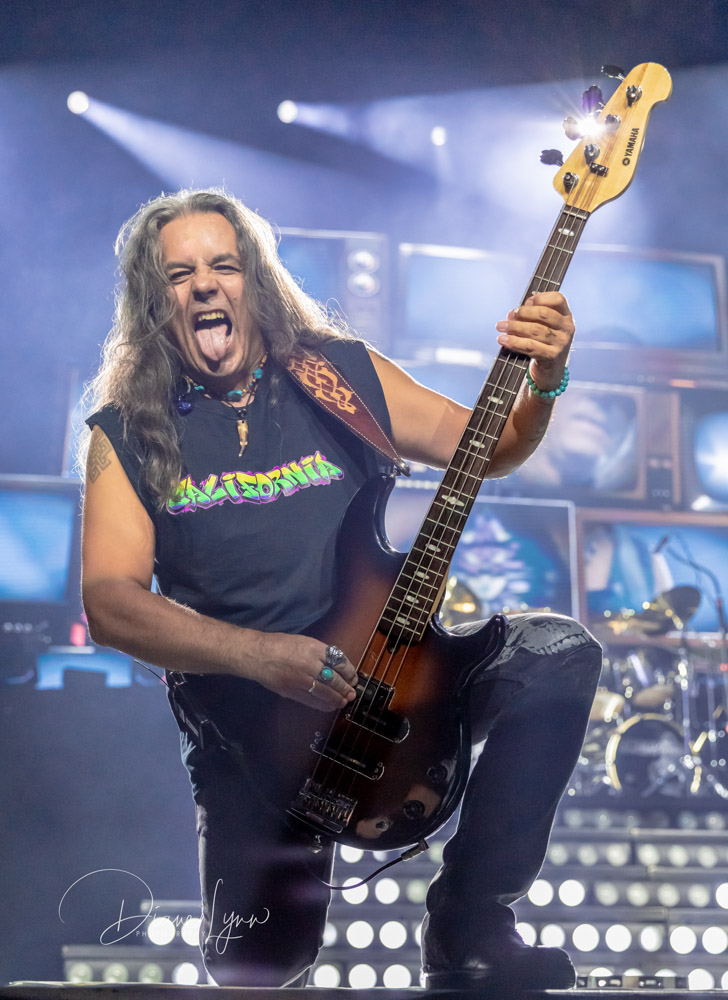 The stage was incredibly set, the visuals were off the hook and the lighting sealed the deal. Among some of the sights was an animated city skyline, a giant American flag, a wall of TV’s showing clips of the various Scorpions music videos that were played on MTV (back when they actually played music videos) and a giant digital slot machine called the Rock Believer Jackpot. While Mikkey Dee did his amazing drum solo the slot machine would spin, once landing on three hand drawn pictures of Lemmy, a guitar pic and cherries. It was nice acknowledgment to his former band Motorhead and his good mate.

The drums sat back and high on the stage (not good for a 5 foot shorty like me) and Mikkey was buried deep in the kit.  The opportunity for me to get a good shot of him was looking pretty dim, but something I don’t recall seeing before this show was a drum camera positioned just to his right giving an up close and personal view to the crowd as it was shown on the giant screen. We need to see this set up more often because drummers need more love!

During my photo op, I found myself back at the tip of the catwalk just as Klaus grabbed a handful of drumsticks from a bucket on the stage and started tossing them out into the crowd. I was eager to get a shot of a stick in the air, so I pointed my lens at him just as he tossed a stick my way and here it came – directly at me. With one hand on my camera I reached out and caught it with the other. A treasure that’s going on my wall, for sure!

One of the highlights of the night for me (aside from catching the drumstick) was when they played their classic rock ballad “Send me an Angel“. Cell phone lights and several lighters lit up the arena like stars in the sky, it was such a beautiful sight to go with a beautiful song! 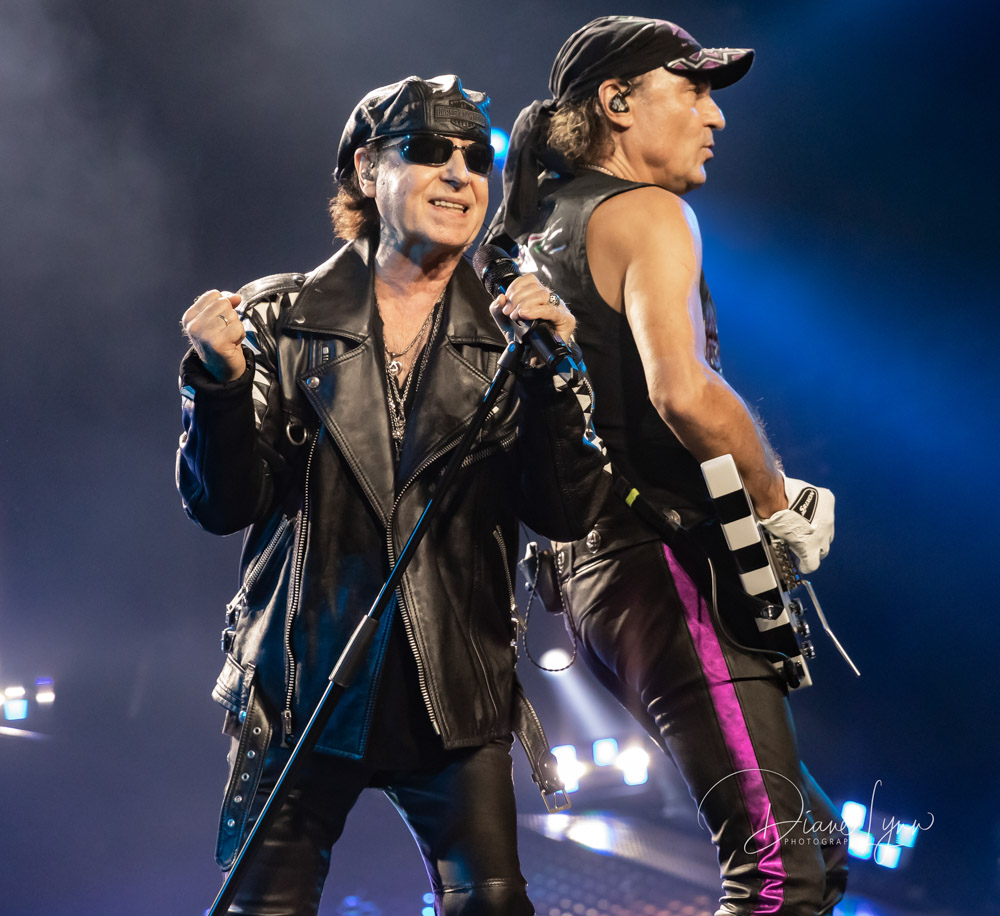 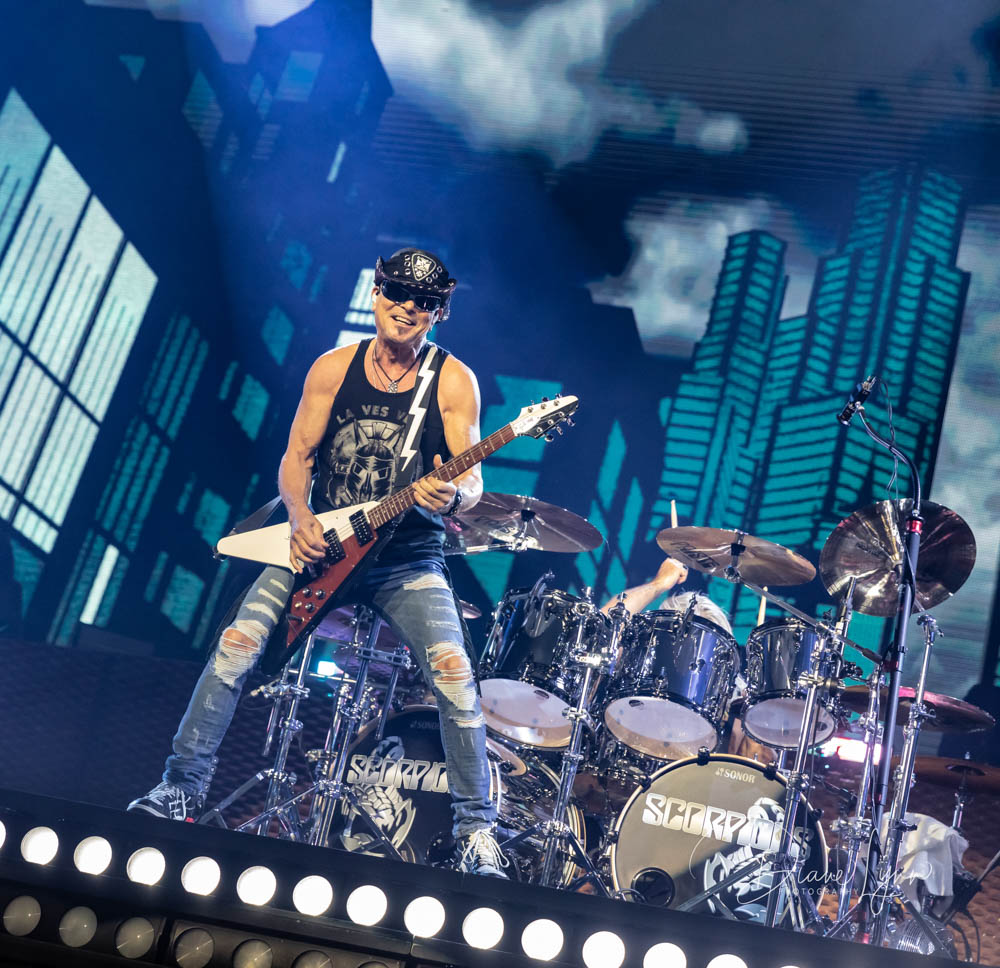 One thing I kept thinking throughout the show was “Man They Still sound amazing!” Nothing has slowed them down, Klaus Meine with his instantly recognizable voice is still hitting all the right notes. The amazing talent of guitarist Rudy Schenker is undeniable, fingers as fast a lightening! And the talented seasoned veterans – Matthias Jabs and Pawel Mąciwoda bring the band together for one sweet line up! 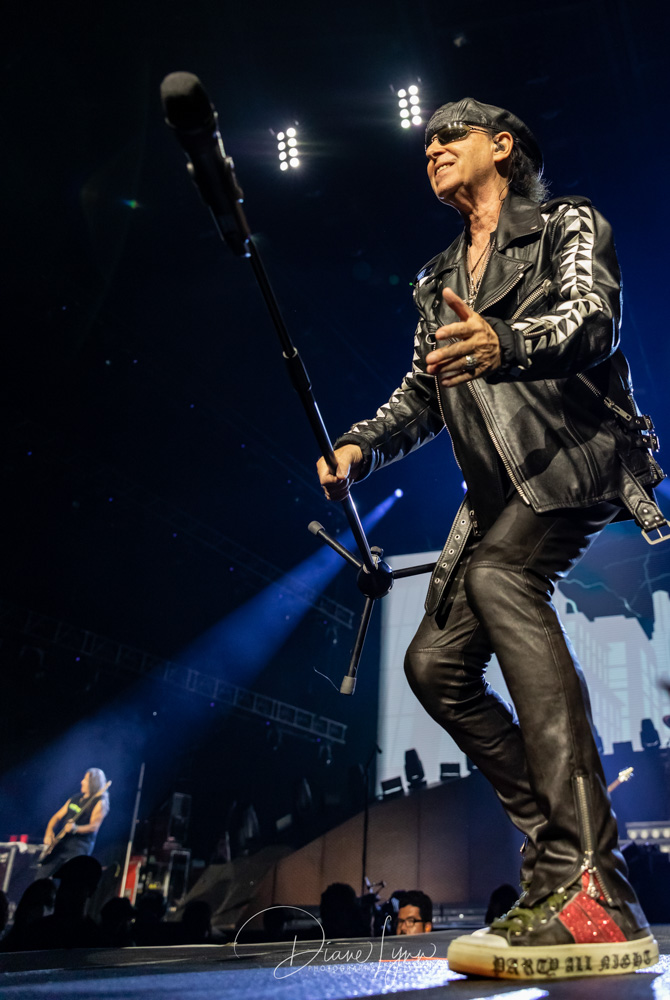 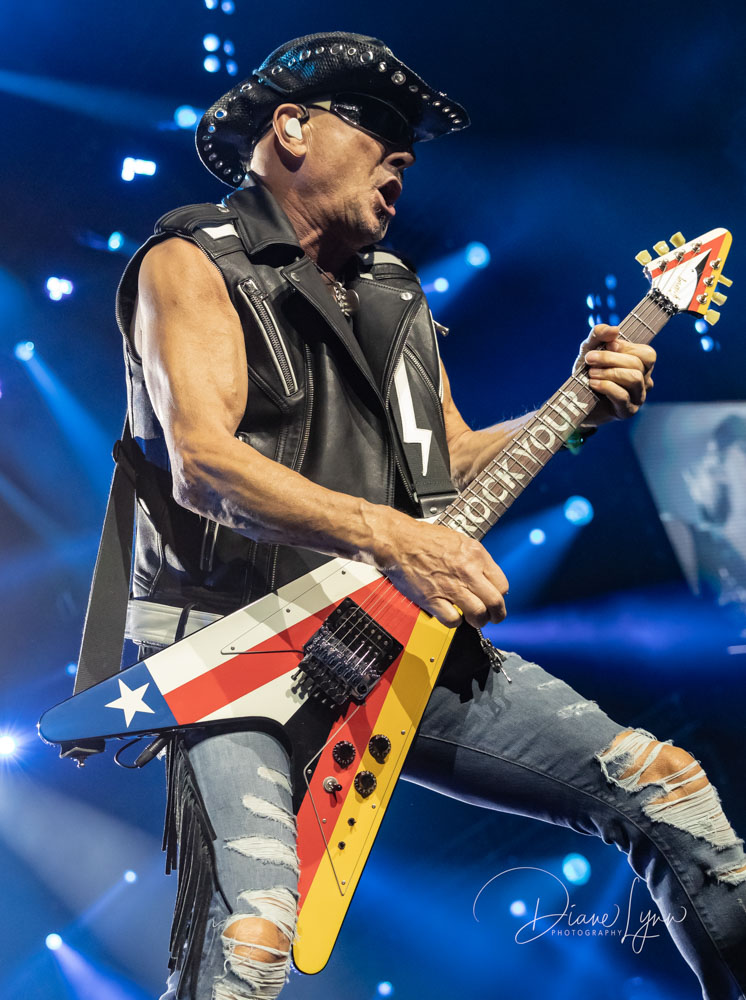 After several solos, guitar, bass and the drums the show was coming to a close.

The band took two bows to the crowd, once after the main set of fifteen songs, then a final just after the encore. The encore lit up the crowd to close it out on a rock n roll high with “No One Like You“ and “Rock You Like A Hurricane“. 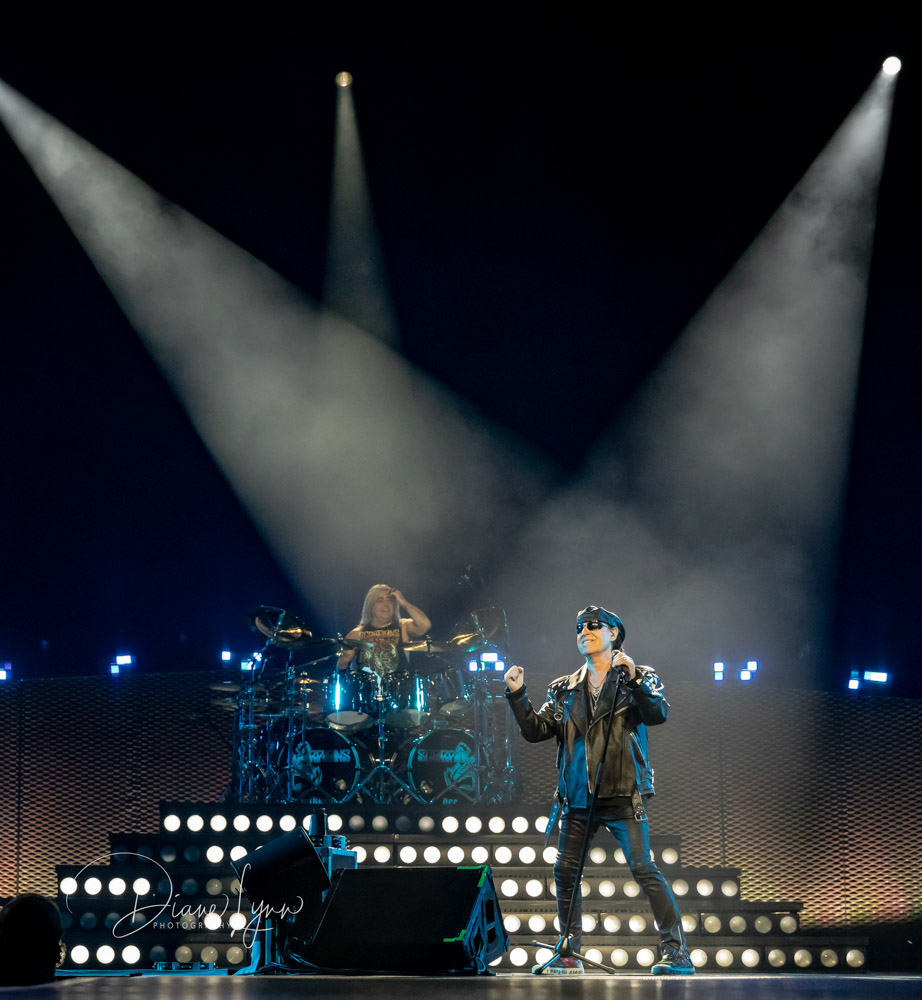 After the final bow the guys stayed at the tip of the catwalk tossing out guitar pics and more drumsticks – giving everyone one last opportunity to cheer them and throw horns with this iconic rock band.

Until next time, Scorpions… Thank you for another memorable night of music!

Opening for the Scorpions was an incredible all female group from Sweden called Thundermother . 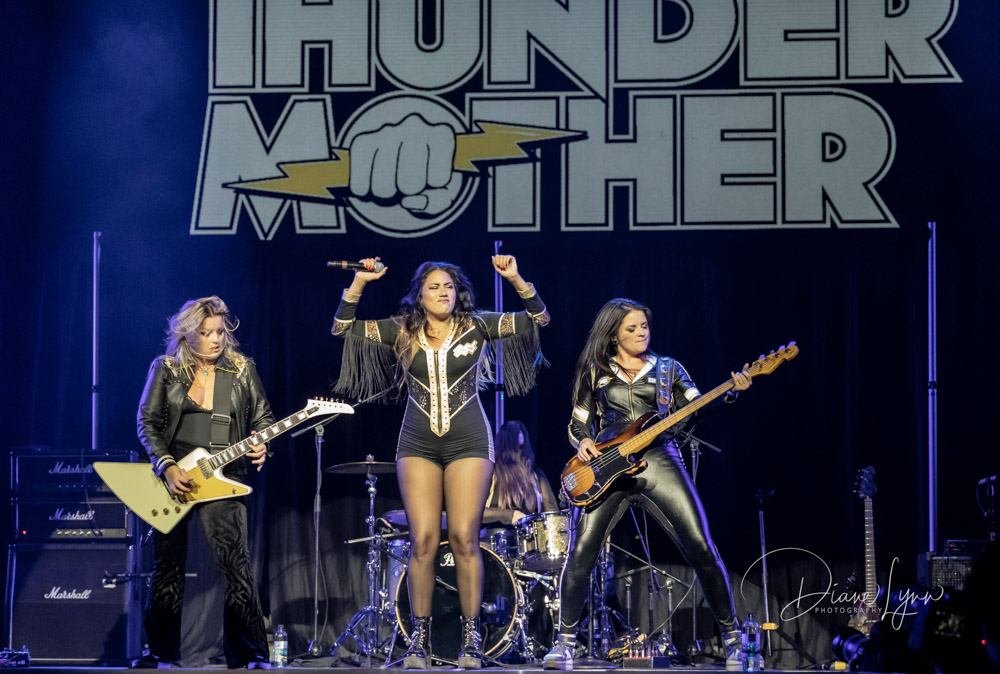 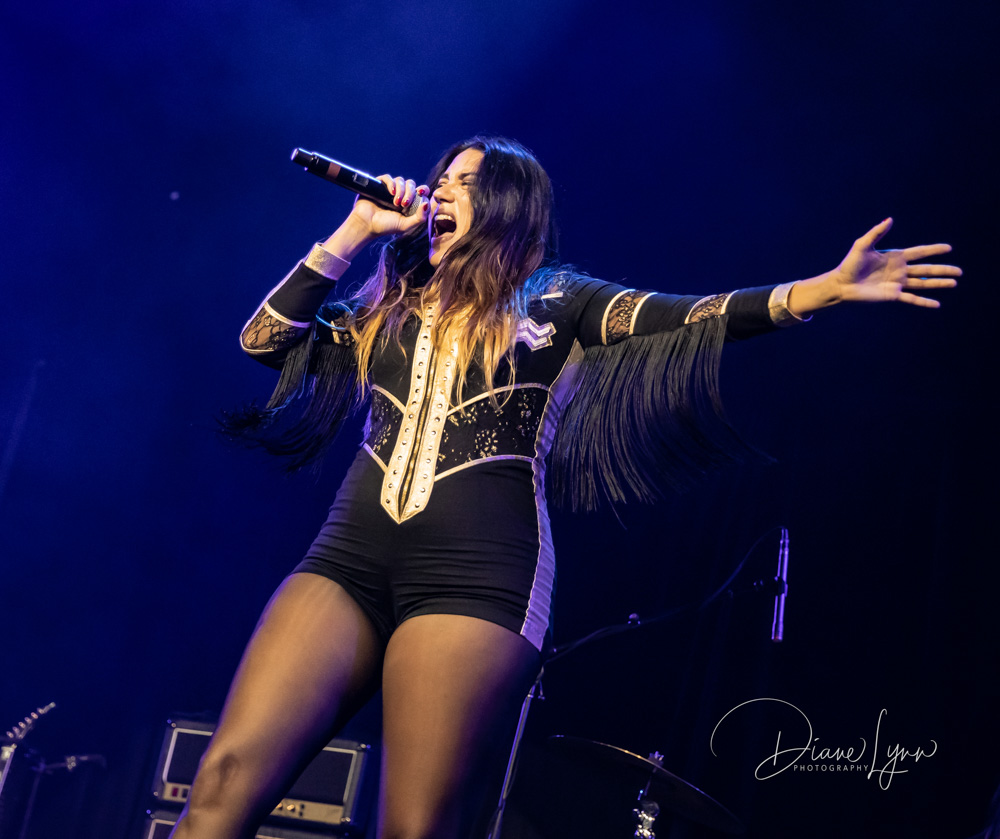 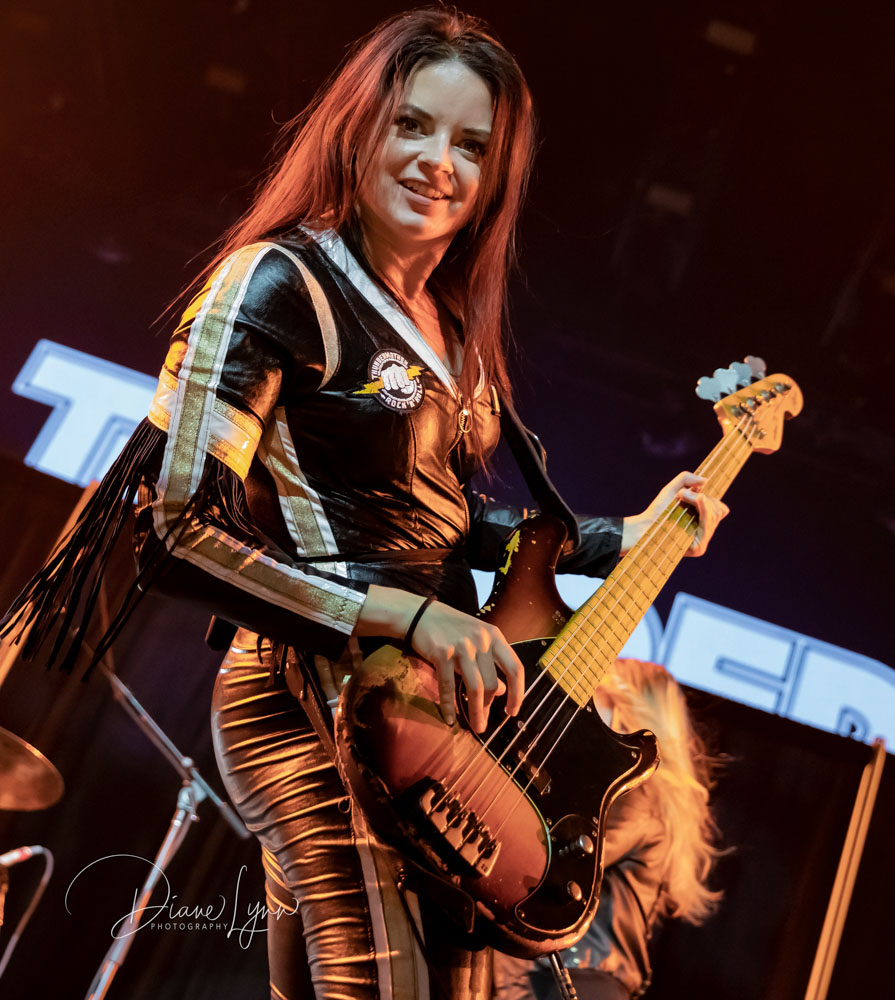 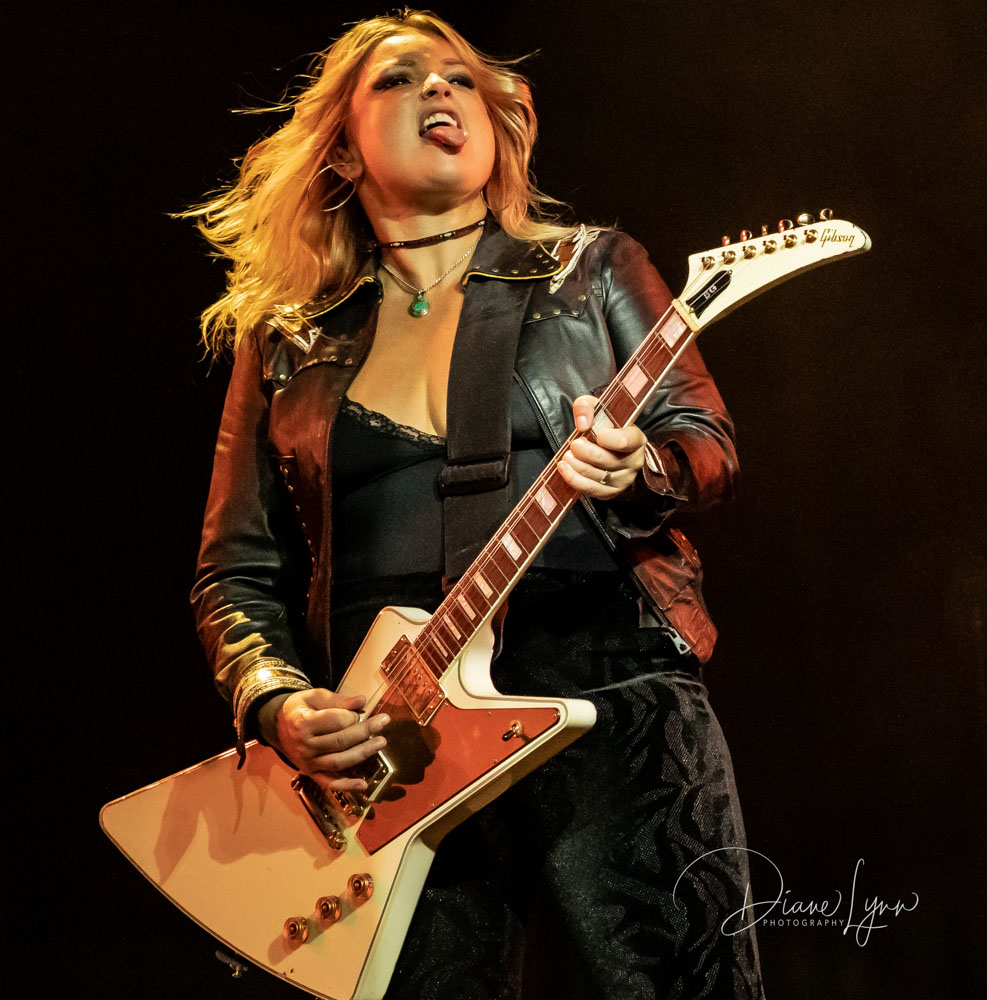 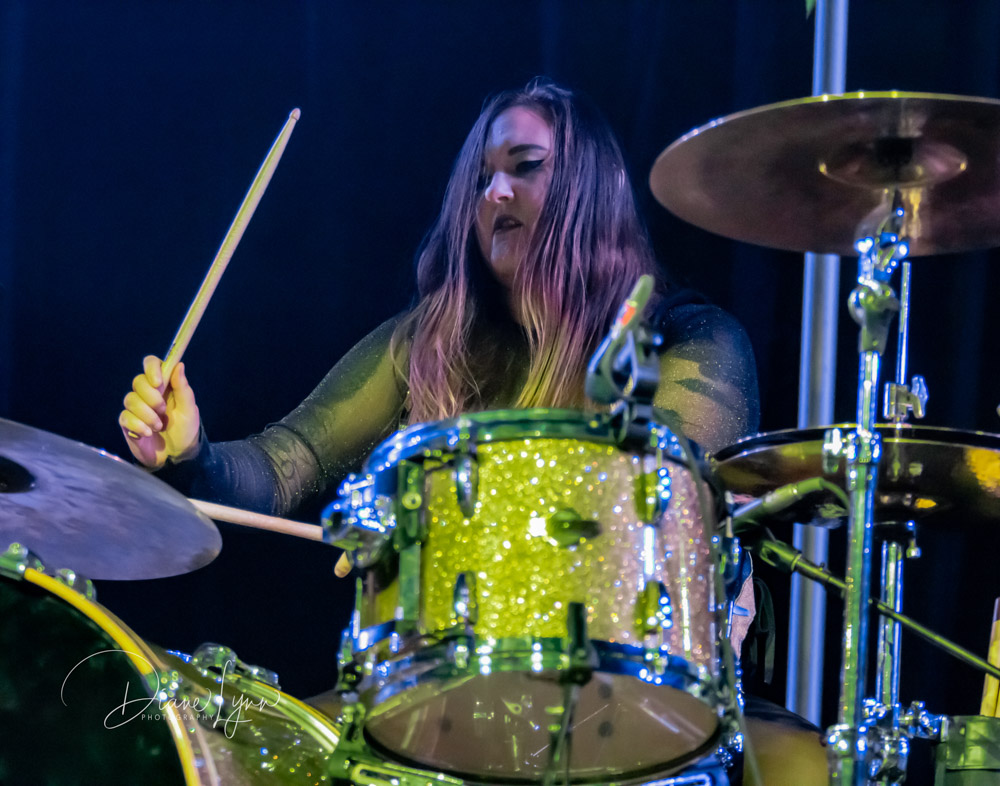 I kept hearing comparisons to AC/DC and after seeing them play live I’d say that was a definitely an accurate comparison. They grabbed the attention of the audience and held them captive until the end of their set and the crowd loved it! 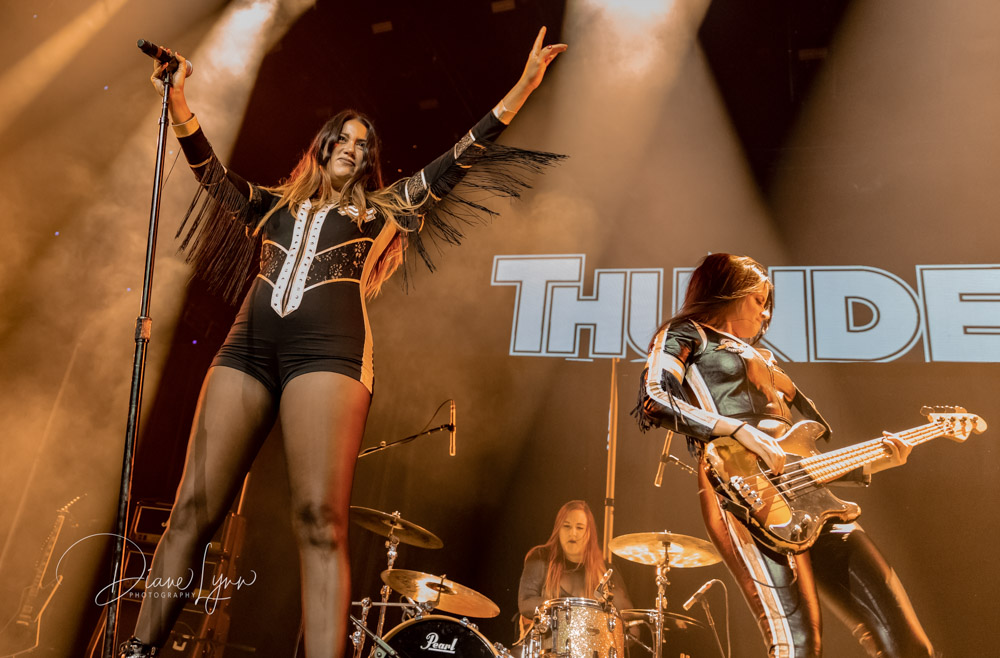 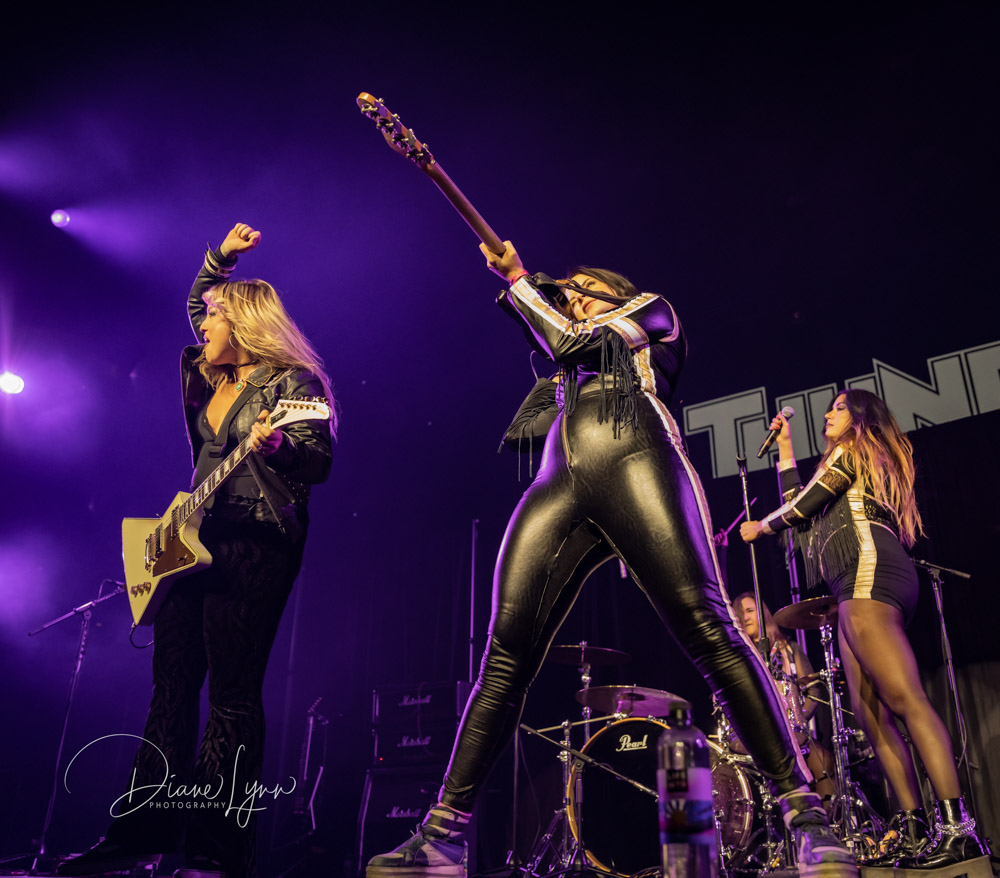 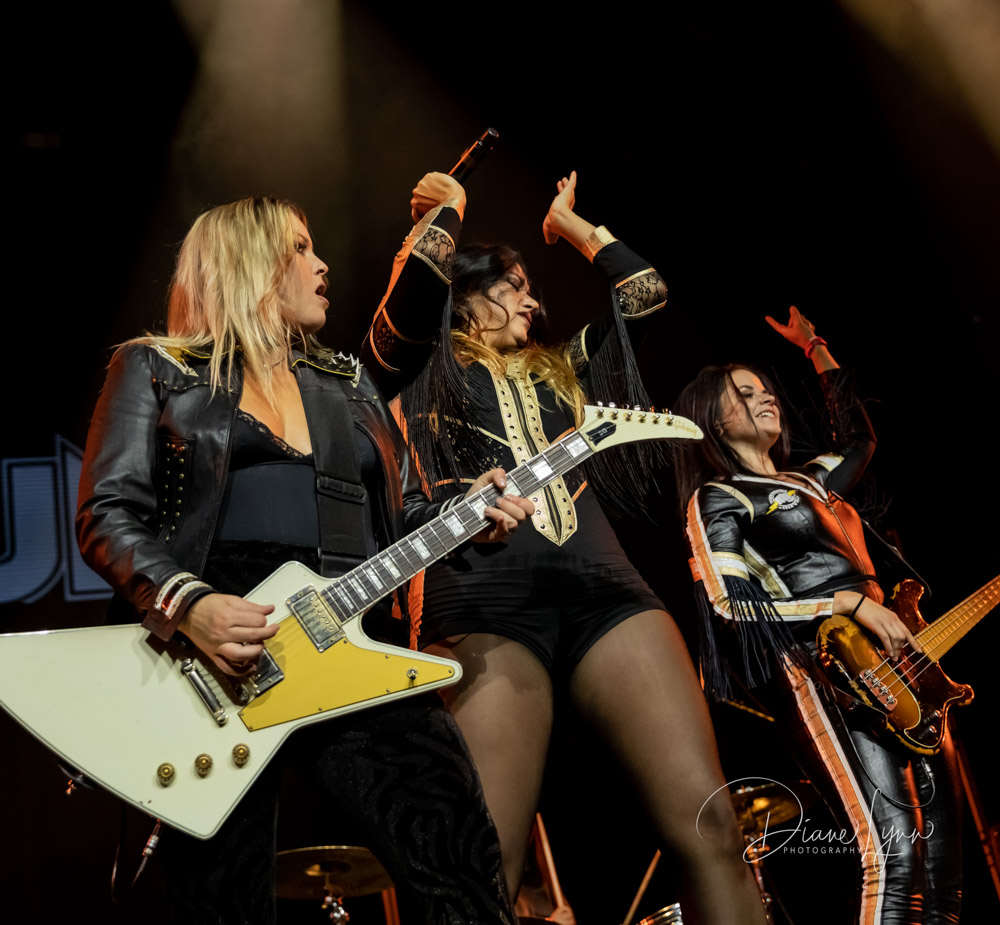 These lady rockers sure did us female metal heads proud! Bringing their original music and metal style; the word Thunder in their band name fits them perfectly.