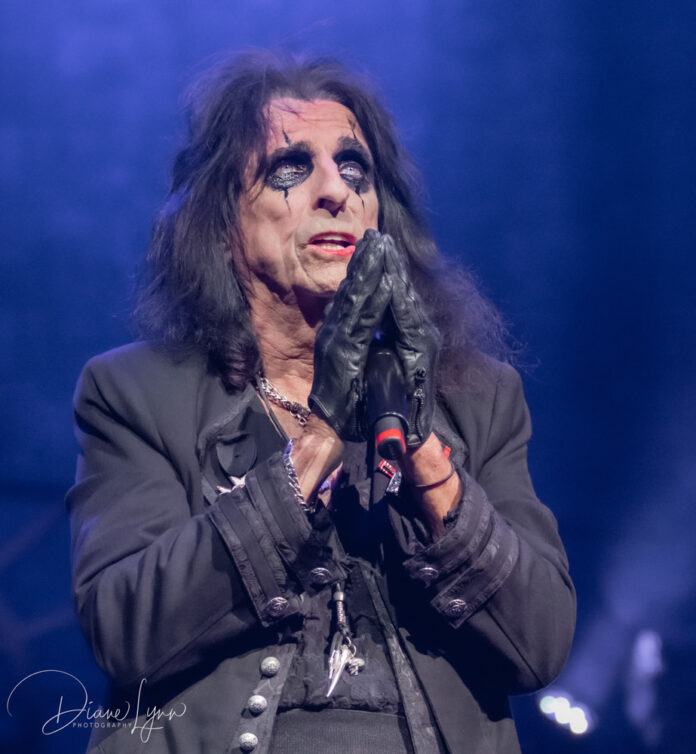 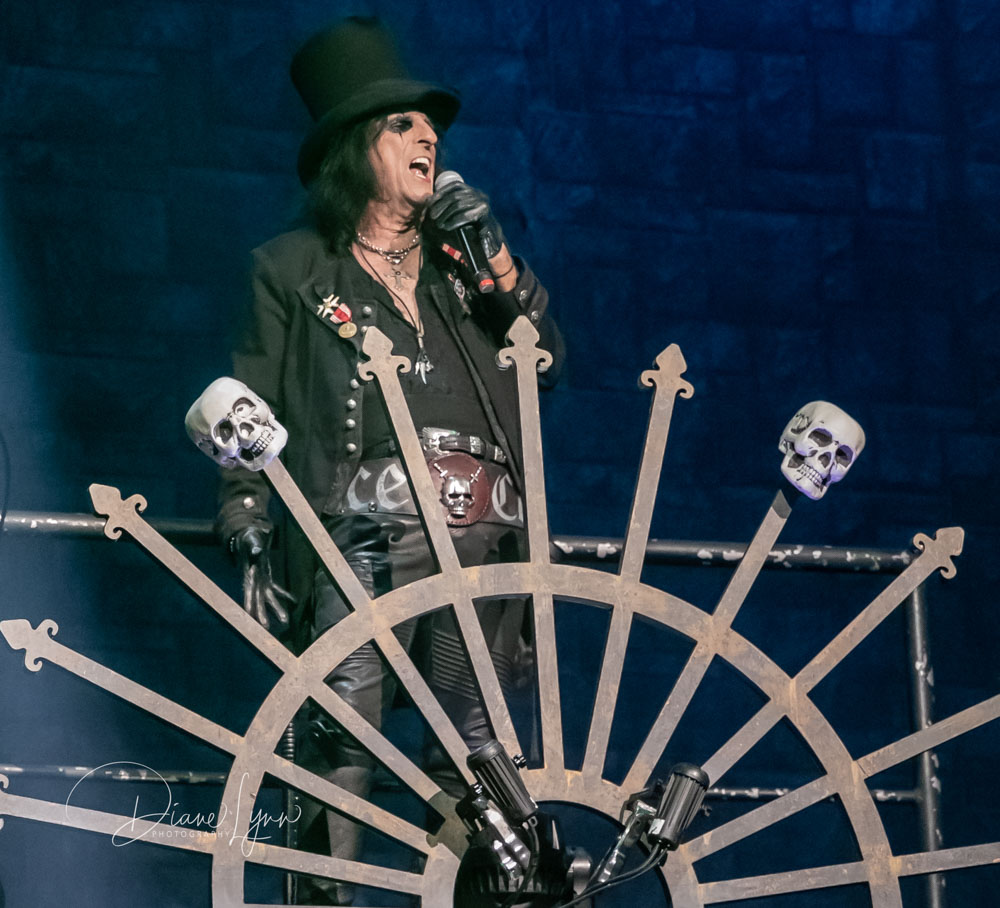 Shock rocker Alice Cooper is nothing short of an iconic figure in the rock n roll world. So, when I heard that he would be performing relatively close to home I immediately bought a ticket. Getting to cover the show was an added bonus!

Mr. Cooper and the band added a stop on his tour at the beautiful Yaamava Resort and Casino, the show was on Friday, so I headed out right after work. After a casual dinner and a small jackpot win (YAY) I headed over to the Yaamava Theater to check in. With over and hour to go before showtime the theater was filling up quickly. Every seat in the house is a good one and by show time every seat was filled. Sold Out! 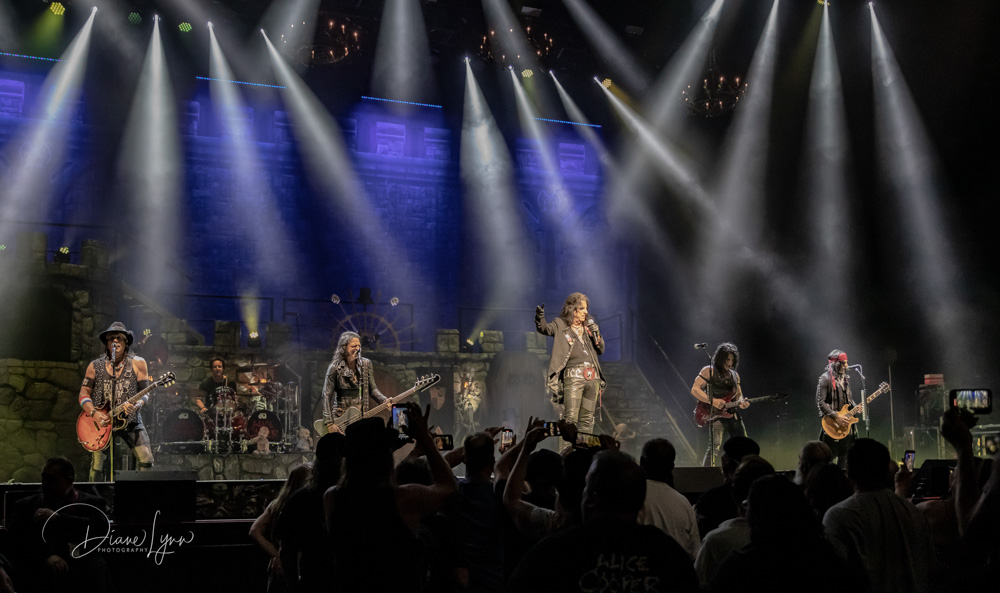 It’s always fun to people watch at “classic rock” concerts, it’s fun to see who will still dress the part as they did “back in the day”, and this show was not the exception. Gals with their thigh high platform boots and heavy on the black lipstick and eyeliner! I even saw a few guys with their spike mohawks; some tipped in red or purple. 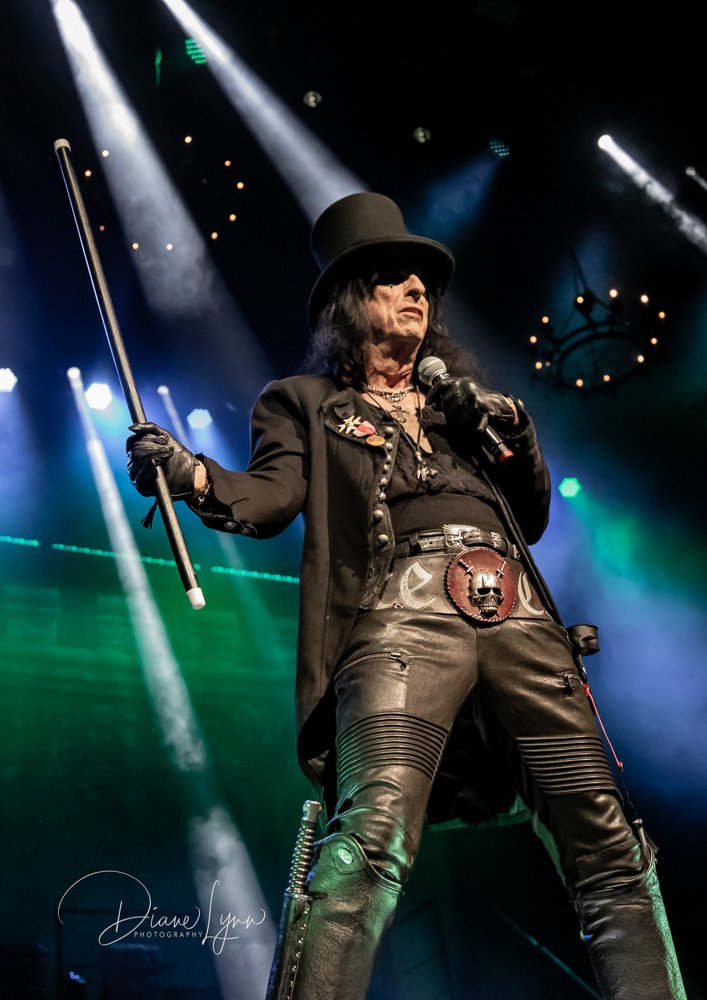 The house lights went out and the curtain lit up with the trademark Cooper glowing eyes! A ghoulish announcer welcomed everyone to Alice Cooper’s Nightmare Castle. Once the curtain dropped, the band went immediately went into the mega hit “Feed My Frankenstein”, with Alice stepping out in his leather-ized tux along with his top hat and cane. The stage was set as a medieval castle looking as if it was built of large stones, with flickering chandeliers hanging from above and flame burning sconces on the walls. On one side of the set there were stairs leading up to a catwalk that Alice and others used several times during the show. The fog was heavy, but the lighting was perfect, the effects were nicely done. 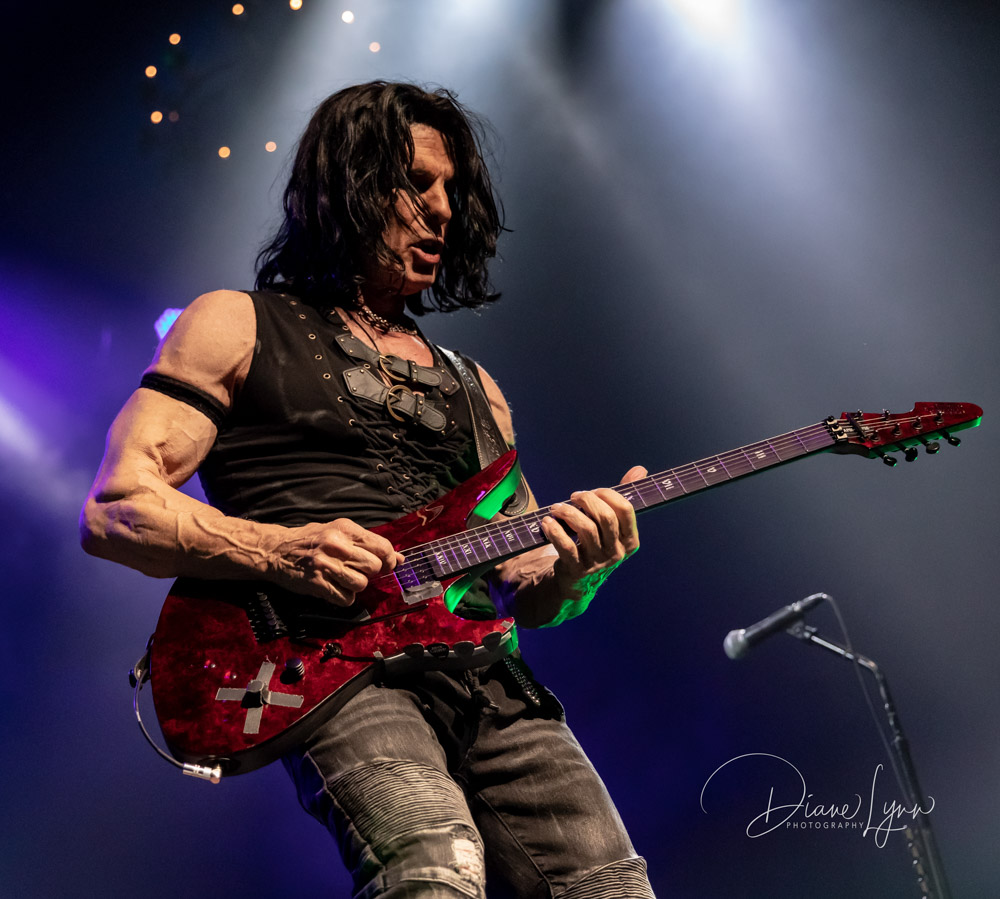 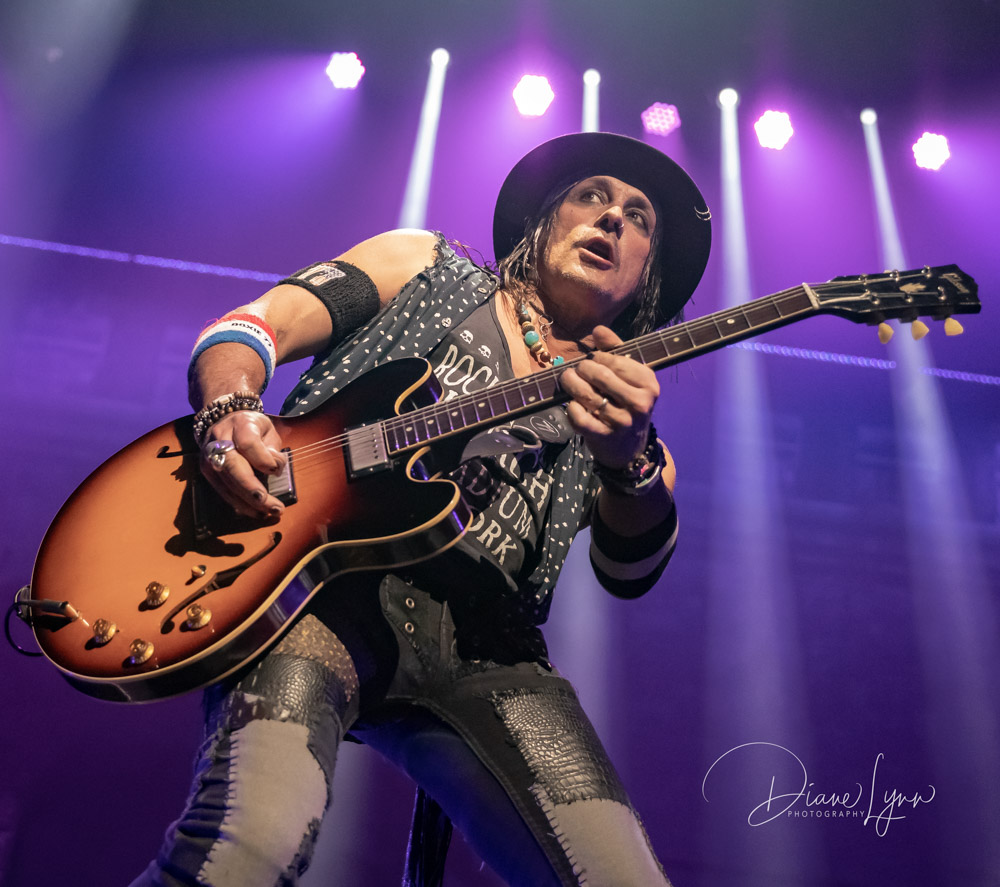 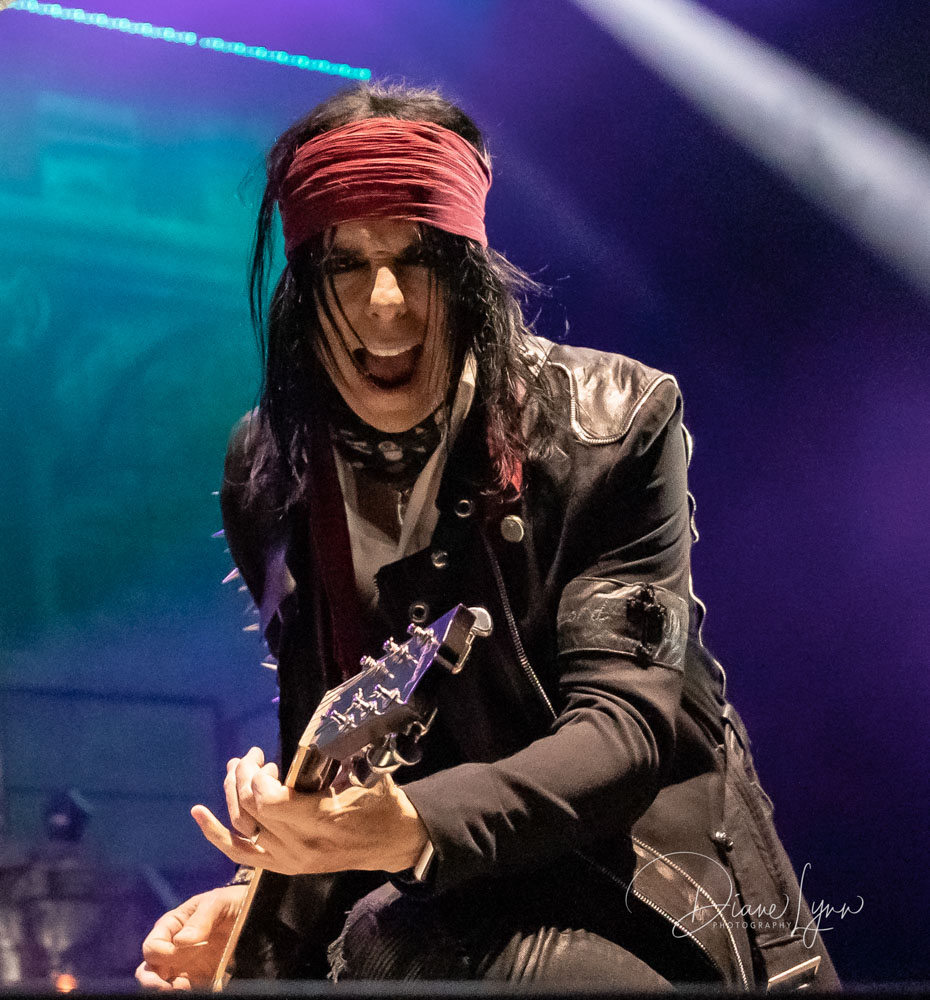 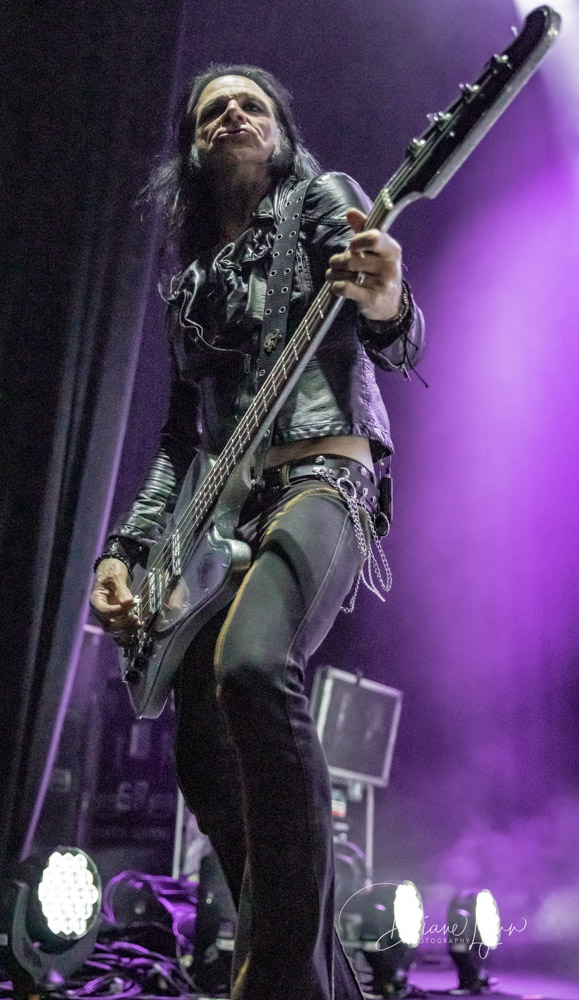 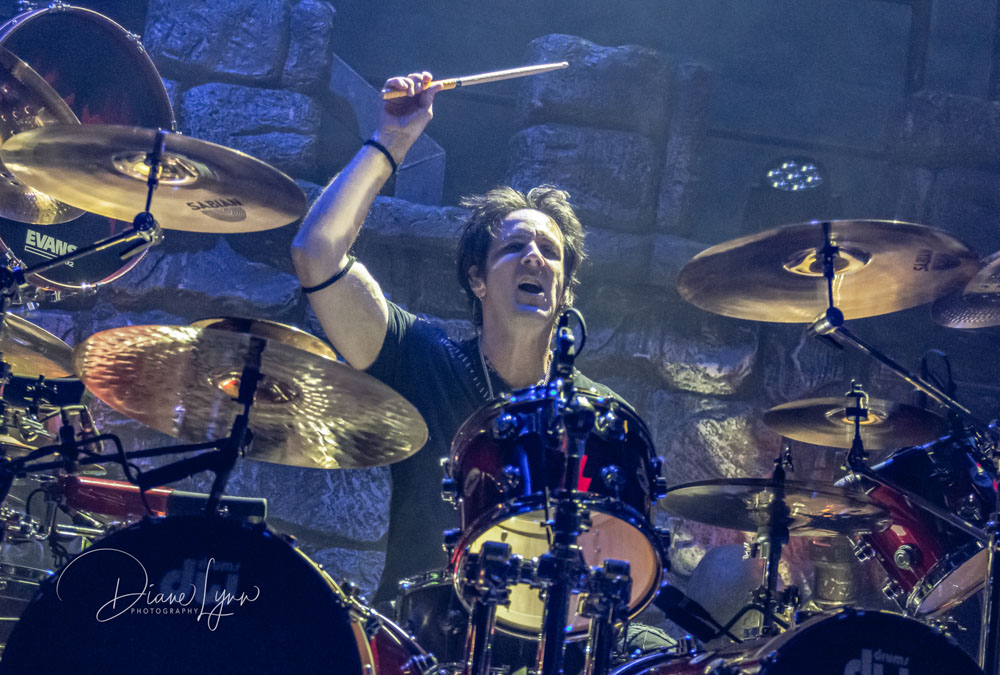 During “Feed My Frankenstein“ there was a giant Alice-Frankenstein that appears on stage and a Hunchback trying to corral him back in to where he got loose. The show was a well-choreographed theatrical production that includes Alice’s beautiful wife Sheryl Cooper who plays a role during the show alongside her husband. Usually dressed as the evil nurse ,this time she was dressed more gothic in a black and red accented laced gown with an eye patch over one eye and a large black rose and skull tiara. Sheryl leads the way with torturing then beheading Alice with the famous guillotine. Even Jason from Friday The 13th movie fame made an appearance to slash the throats of an unsuspecting victim. 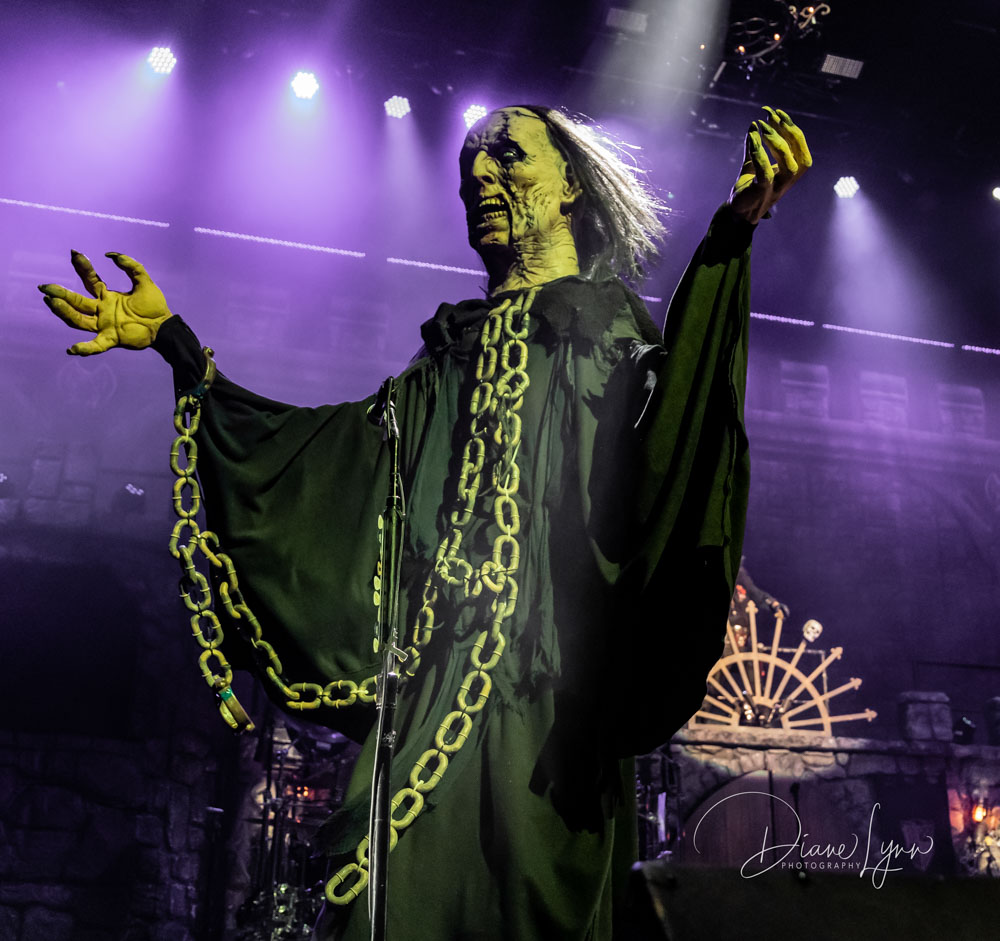 The set list touched on some the most recognizable rock songs of all time, “No More Mister Nice Guy”, “Hey Stoopid” and “Billion Dollar Babies” – pulling from at least twelve different albums spanning over his fifty plus years.

The supporting band is made up of an all-star cast that includes, 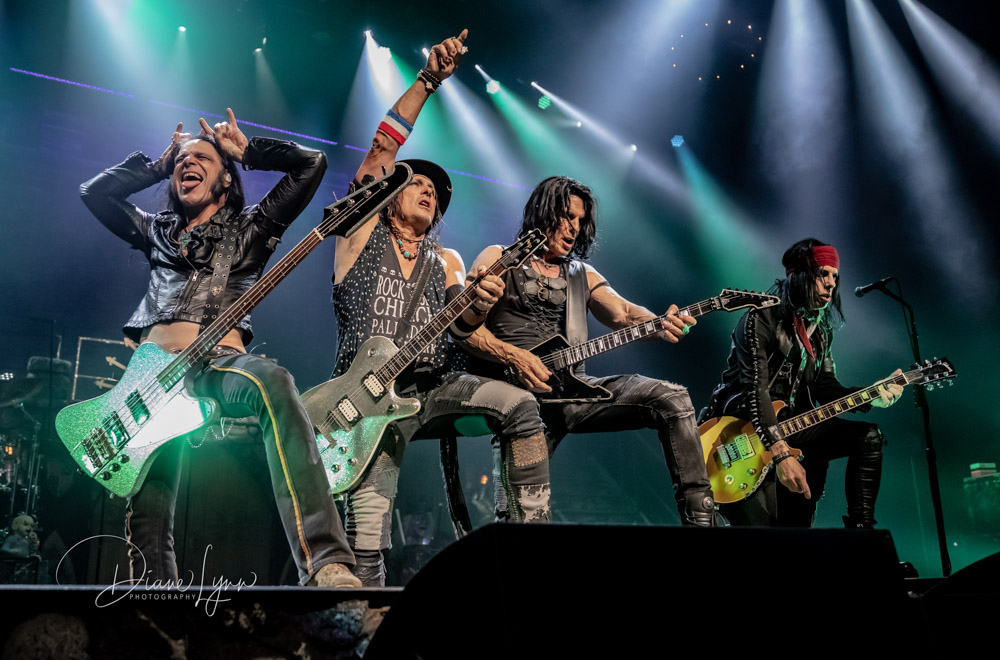 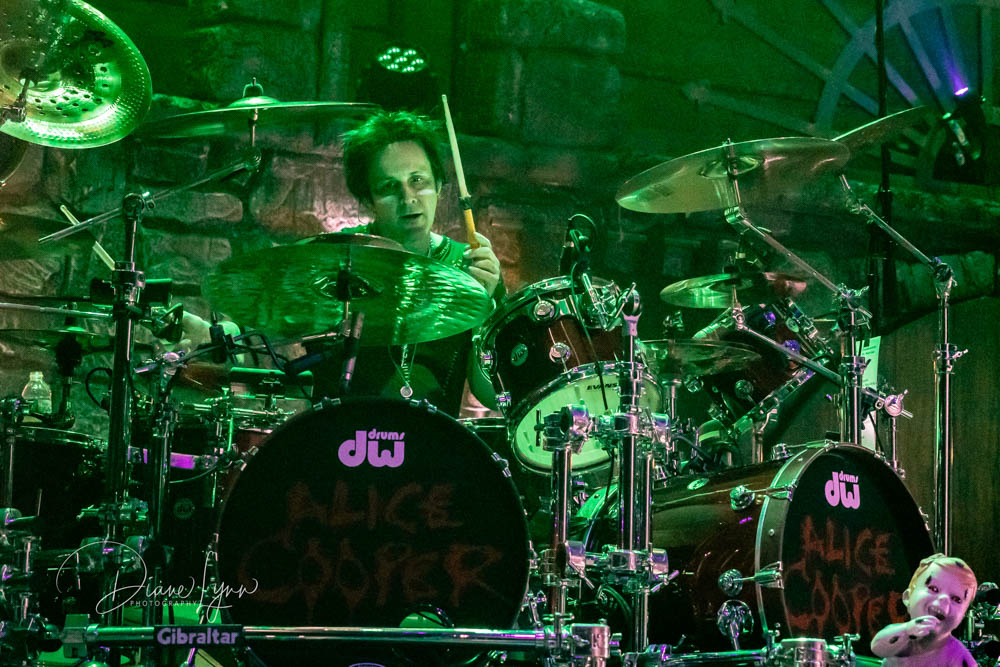 All of the guys were playing to the crowd while masterfully navigating their way around. There was so much movement happening on stage, with various ghouls and goblins making appearances while Alice made his way to every corner of the stage. Everything flows flawlessly. It is a VERY well put together show. 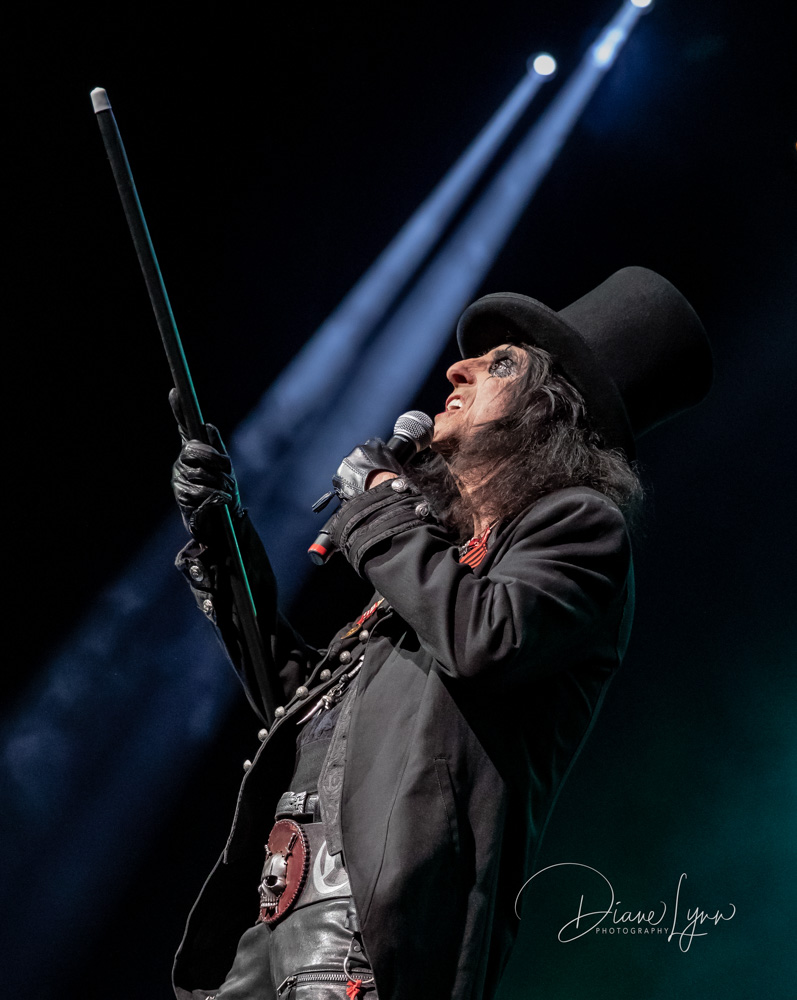 Each band member also had their time in the spotlight: Glen Sobel performed a killer drum solo; Kane Roberts, Ryan Roxie, Chuck Garric and Tommy Henriksen each stepping up on the riser for their opportunity to shine in the spotlight. At times doubling up and playing off of each other to the delight of the crowd. When all four came together for a quick jam and a bit of clowning around the fans couldn’t get enough! Throwing picks out into the crowd and pointing to the fans in the audience. This just heightened the energy and really added to this killer concert experience. 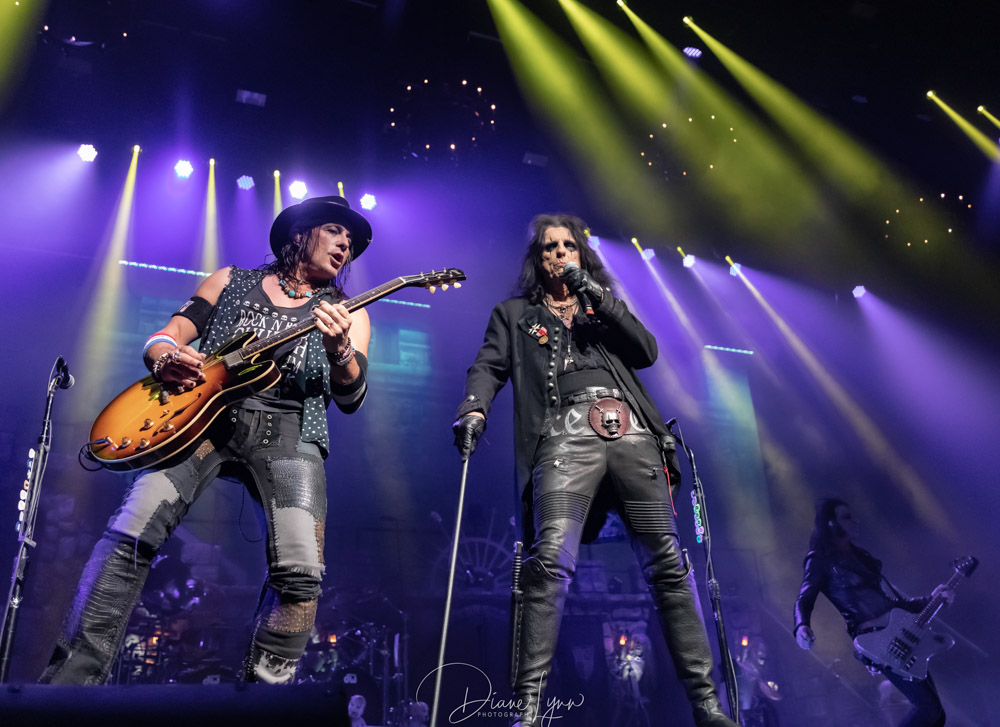 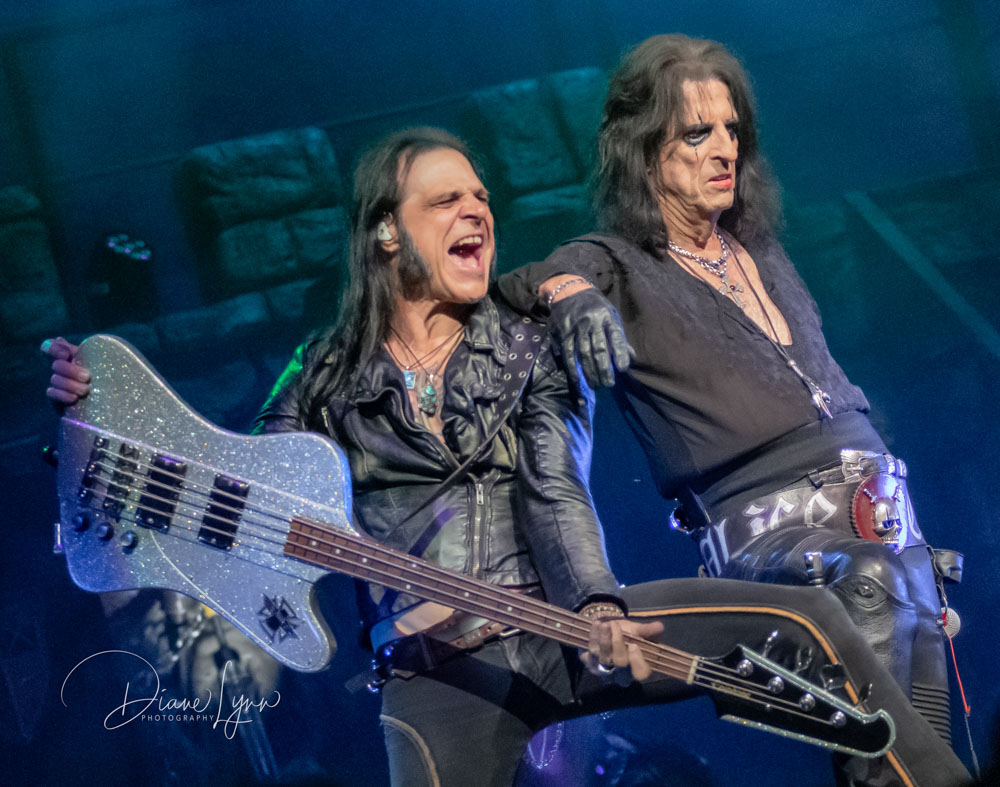 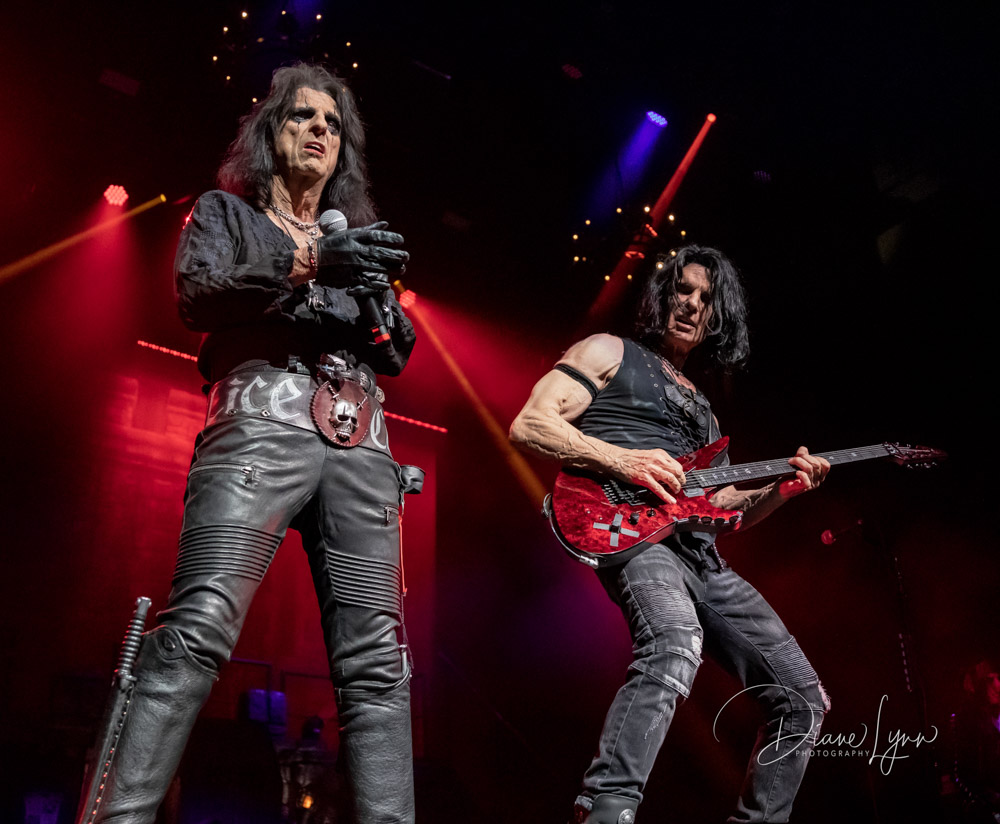 For the encore, Alice stepped out in another signature outfit, his all-white tux, top hat and cane to perform one of my favorites, “Schools Out”. The fog was on blast and confetti filled the air over the stage along with giant balloons for the fans to hit back and forth while singing along to the song. Alice introduced each band member and with that and a final bow the show was over.

It was a perfect end to such an amazing show!