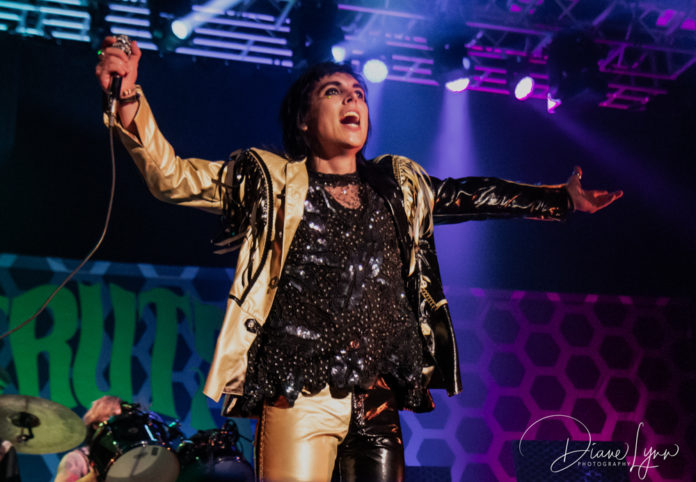 I can’t think of a better way to spend my Saturday night than with The Struts!

The house of Blues in Anaheim was rockin’ last Saturday night and it was all because The Struts blessed their Orange County fans with a stop on their Tour de California! 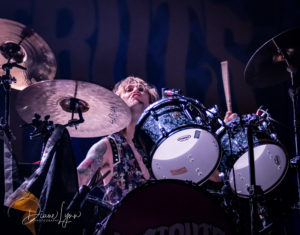 I first saw The Struts back in 2015 when they opened for Motley Crue and I knew then they’d become a regular on the rock circuit. They’ve come my way a few times since but unlucky me was never able to make it. But this time the stars aligned in my favor, so with camera in hand I arrived early with anticipation because I just knew this was going to be FUN! The line for the door wrapped around like a snake outside and the fans were a bit antsy for the doors to open. But once inside the fans were in high spirits, drinks were flowing, and the main hall of the House of Blues Anaheim quickly filled up to a sold-out status. 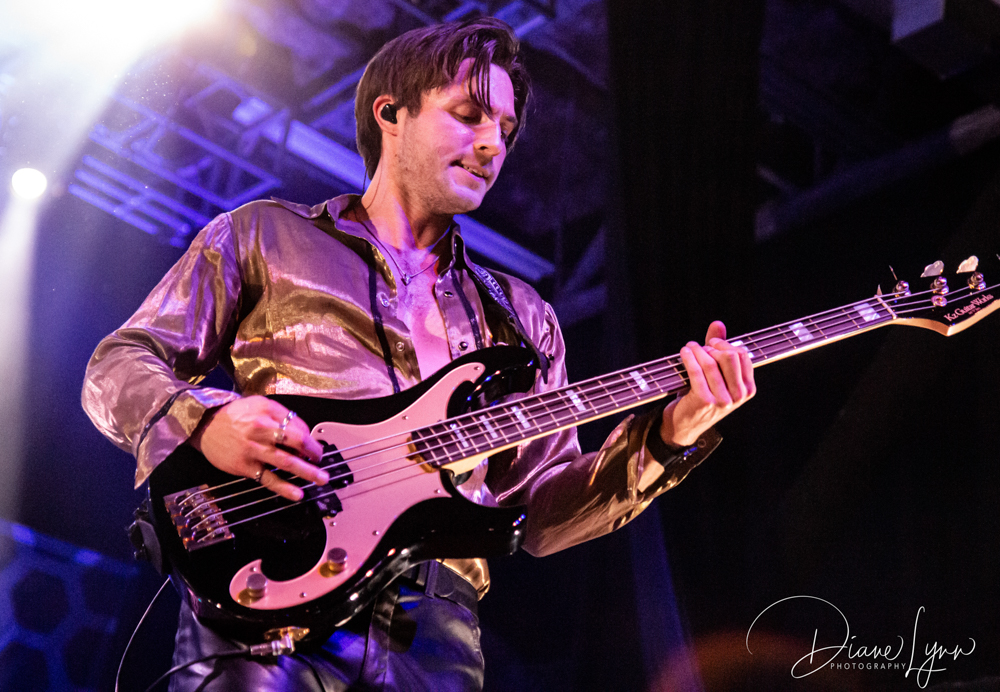 I can’t recall the last time I went to a rock concert with this much energy. It was truly over the top! From the time The Struts came out on stage to the second the show ended the band was pumped and the crowd seemed to be floating on air from it! 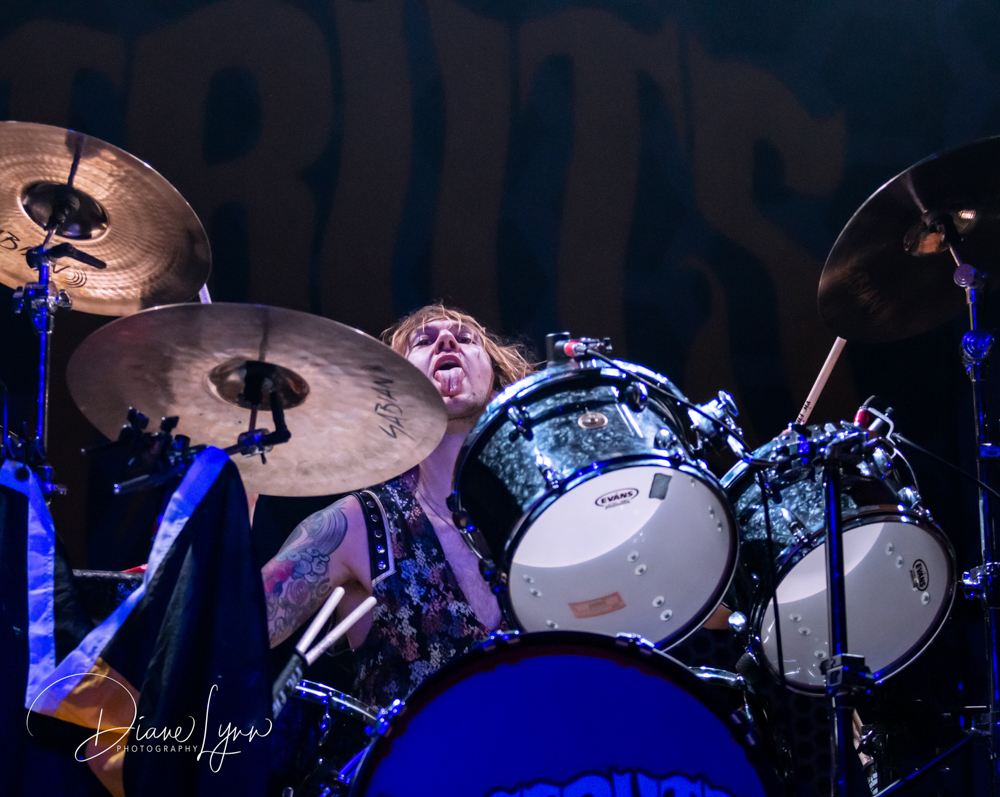 Front man and co-founder Luke Spiller is an amazing singer and performer. He’s been likened to the Late-Great Freddie Mercury, Mick Jagger and early Rod Stewart and a few have added in a dash of Dr. Frank-N-Furter. Whatever the comparisons may-be he’s definitely a sight to be seen and once he steps out on the stage you can barely take your eyes off of him. 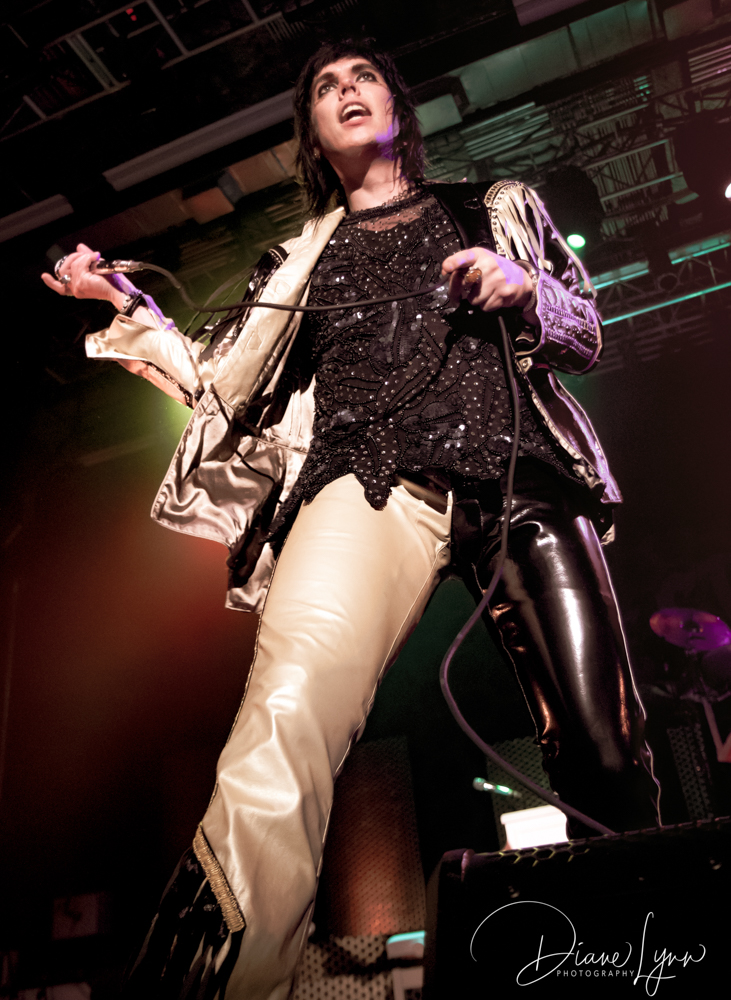 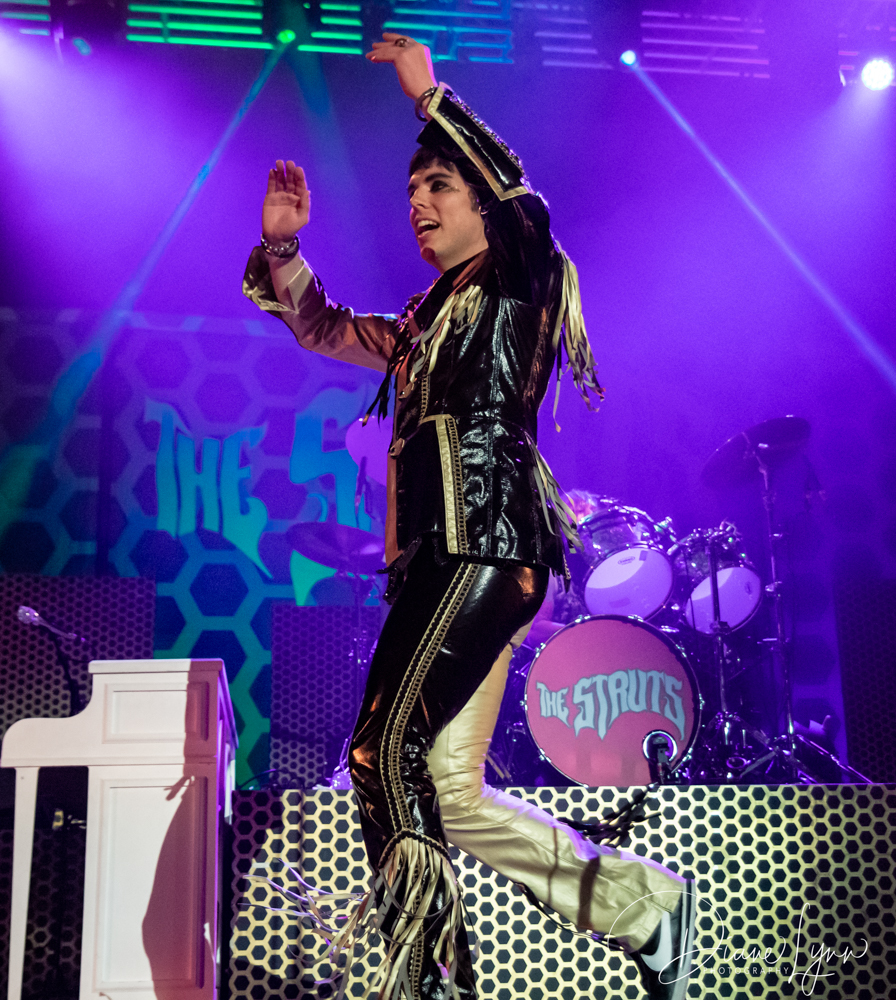 Guitarist and co-founder Adam Slack is a wizard on guitar, rightfully shining in his own spotlight. Drummer Gethin Davies was a challenge to shoot as he was a bit hidden behind his kit however his presence was very known with his heavy booms on the drums. Usually the bass player is the cool, calm guy who stays a step back on stage but not Bassist Jed Elliott. Jed was awesome to watch. He was jumping with the crowd and rocking out to every song all while serving up the killer bass licks. 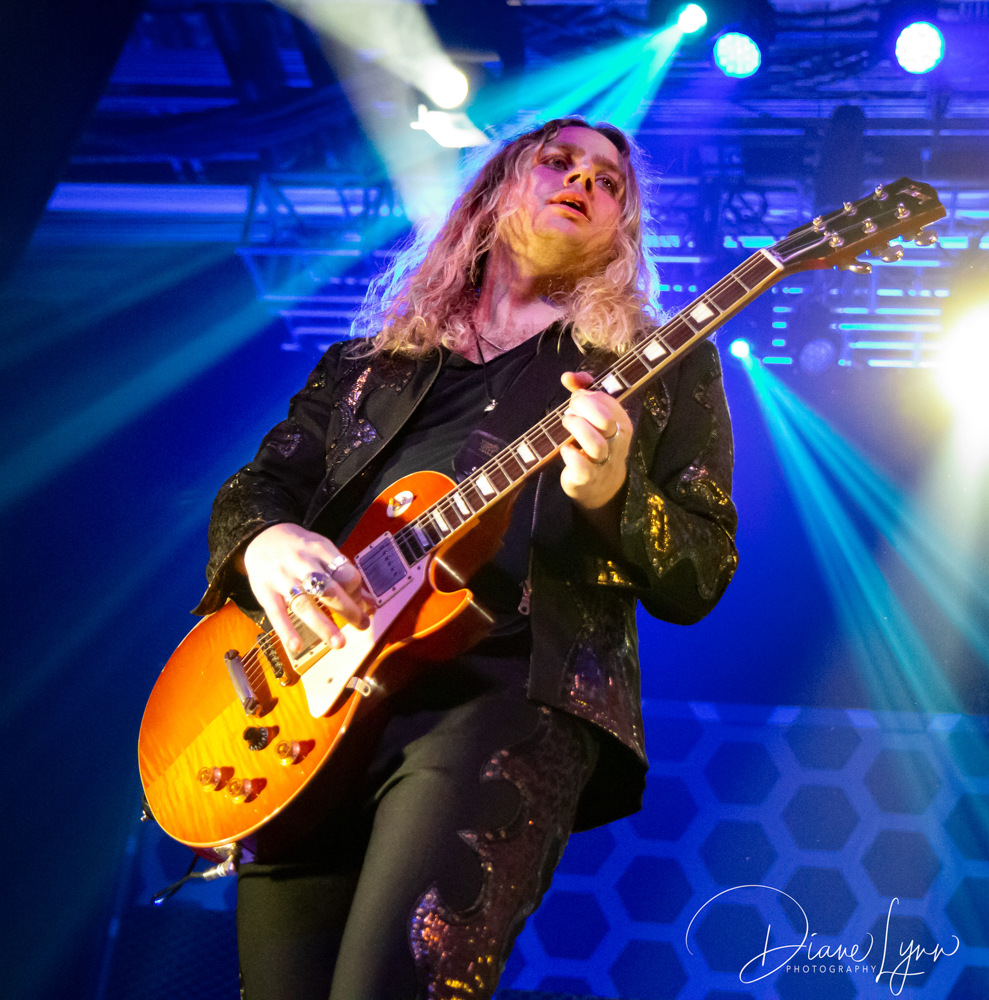 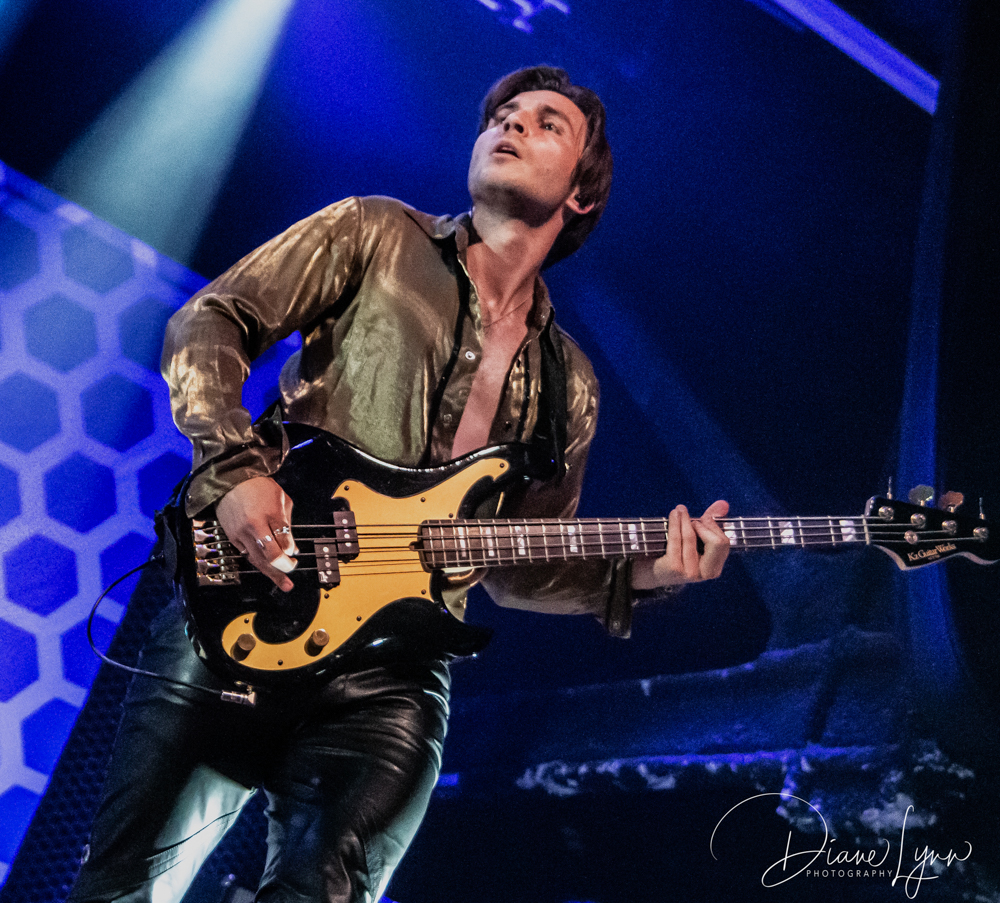 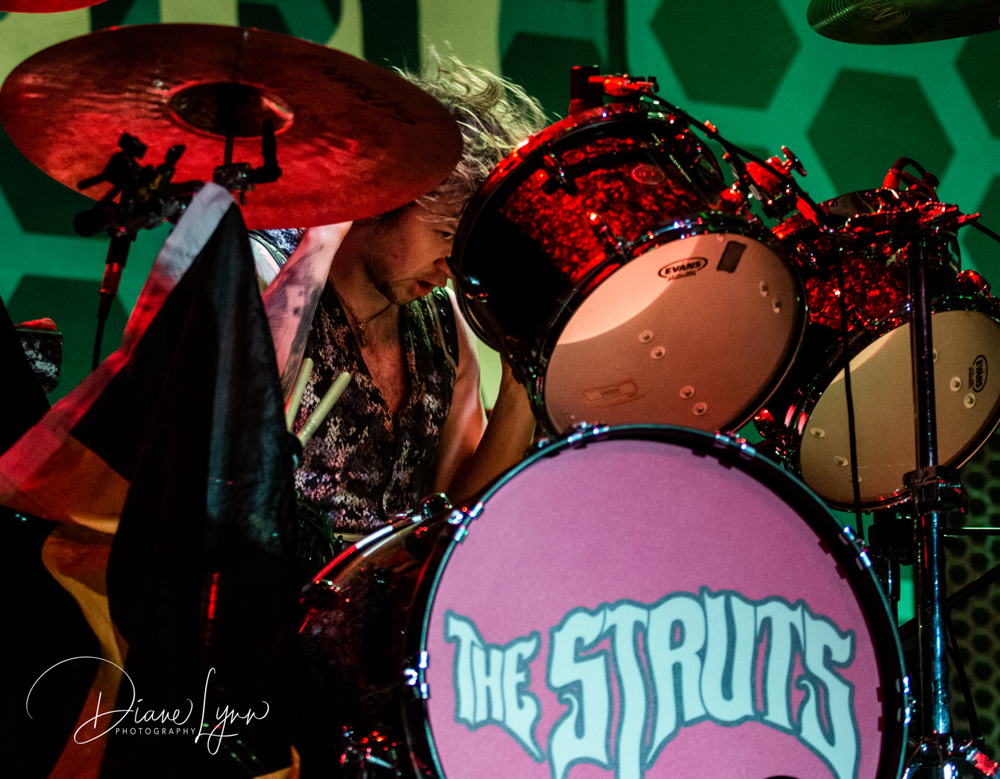 The band as a whole are fantastic together, the interaction with each other as well as with the crowd makes you feel as if you’re part of the show and holy smokes – it’s one hell of a show! This is what a rock show should sound, look and feel like. What The Struts bring to the stage is an experience not just an event. 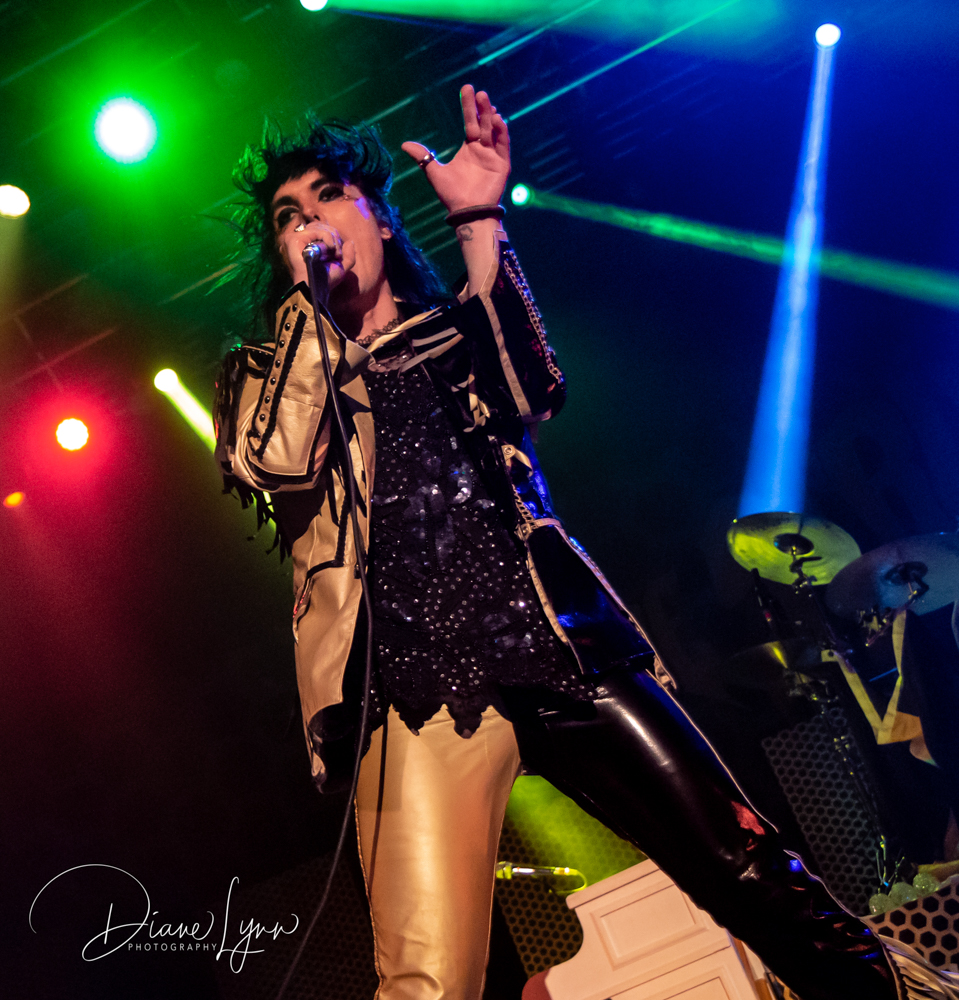 They played a wide range of their hit songs. Pulling heavy from their “Young and Dangerous” album they started us off with “Primadonna Like Me” and straight into my personal favorite “Body Talks”. 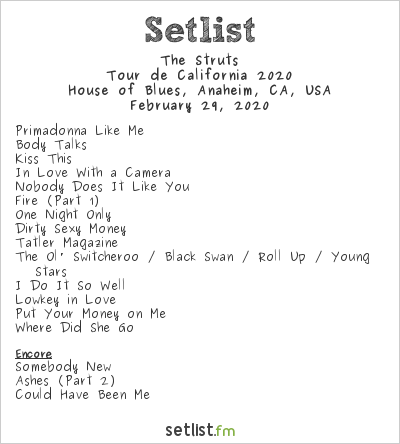 The Struts – the English band that rocked Anaheim and we definitely needed what they were giving out!

The band is gearing up for several dates in Japan and then a few stops back here in the States before heading out to far off places. I believe they may be coming back around So Cal in September -ish.
To stay up to date on tour info check back with WillToRock.com Opening for The Struts was a band out of Los Angeles called Starcrawler. A female led band that will leave you both shocked and amazed, and more curious to see them again. 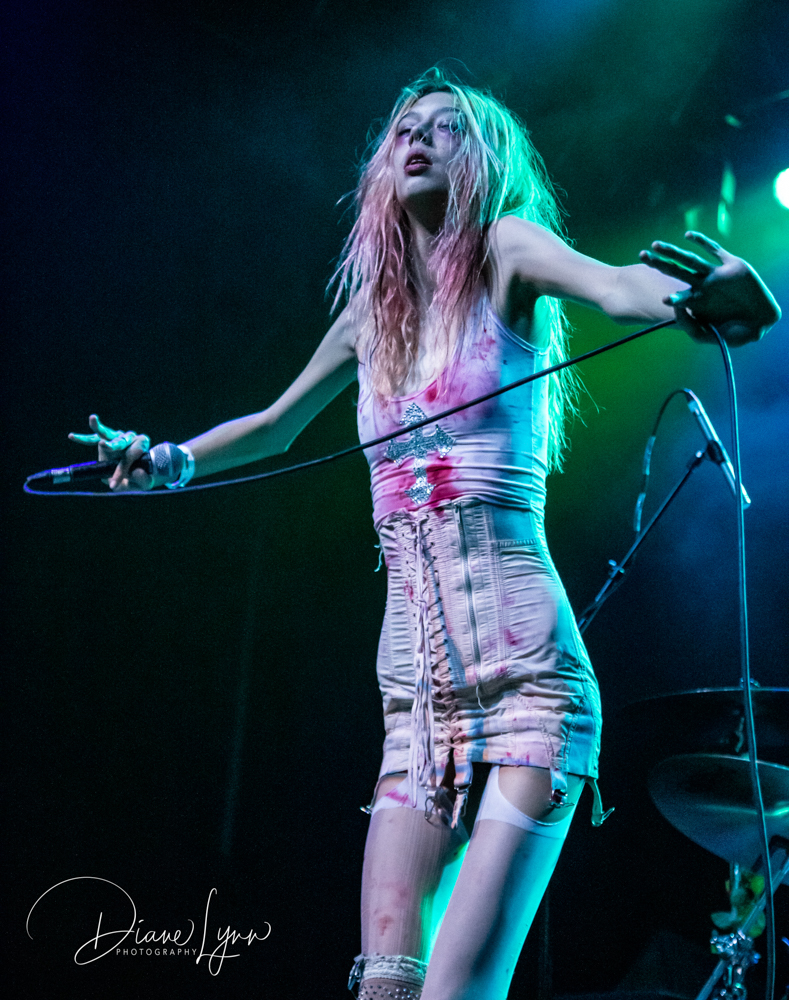 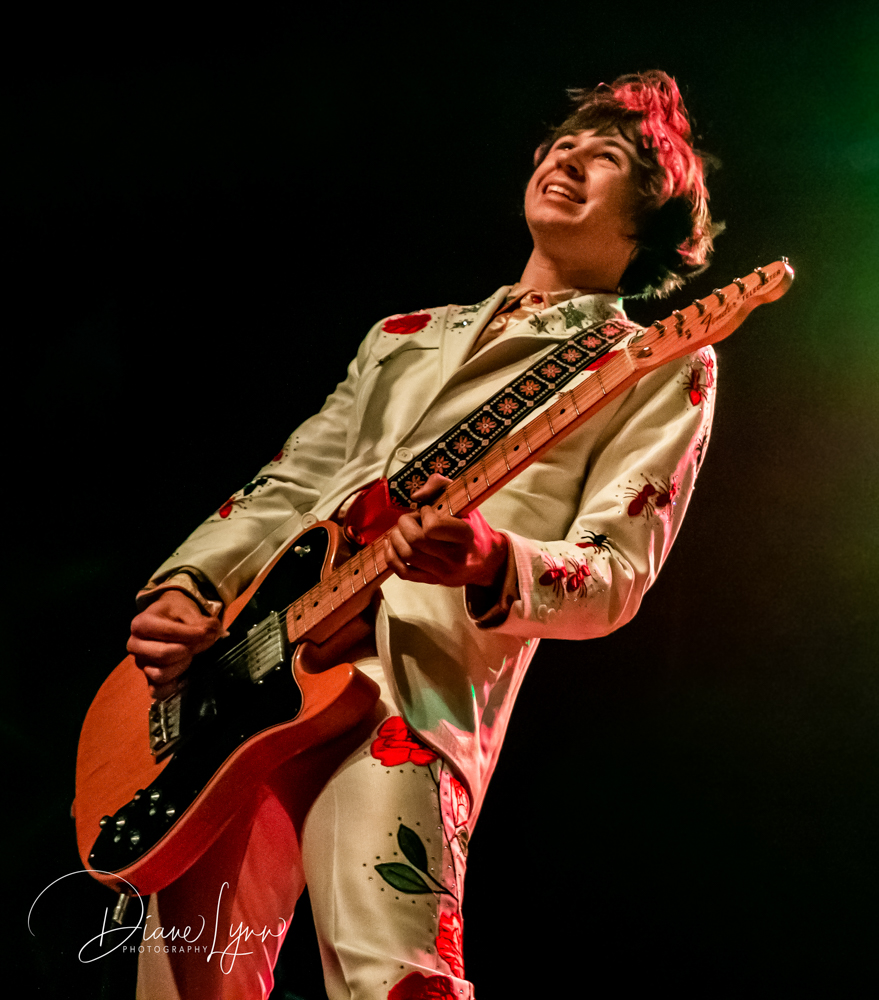 Great performance from Frontwoman Arrow De Wilde. Small hints of Cortney Love of the band Hole come to mind however, she has a unique look and performance style that makes her easily recognizable. The band’s Guitarist is Henri Cash and he’s a blast to watch. He looked to be a very young lad with the talents of a seasoned player. Drummer Austin Smith and Bassist Tim Franco round out this punk-pop quartet. 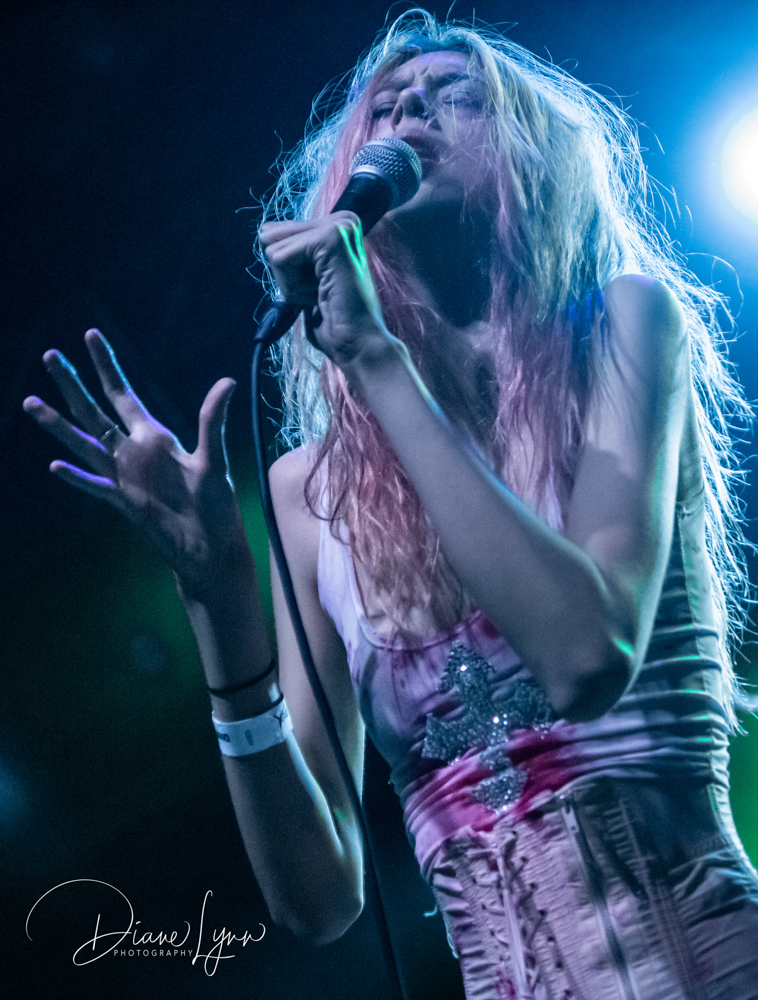 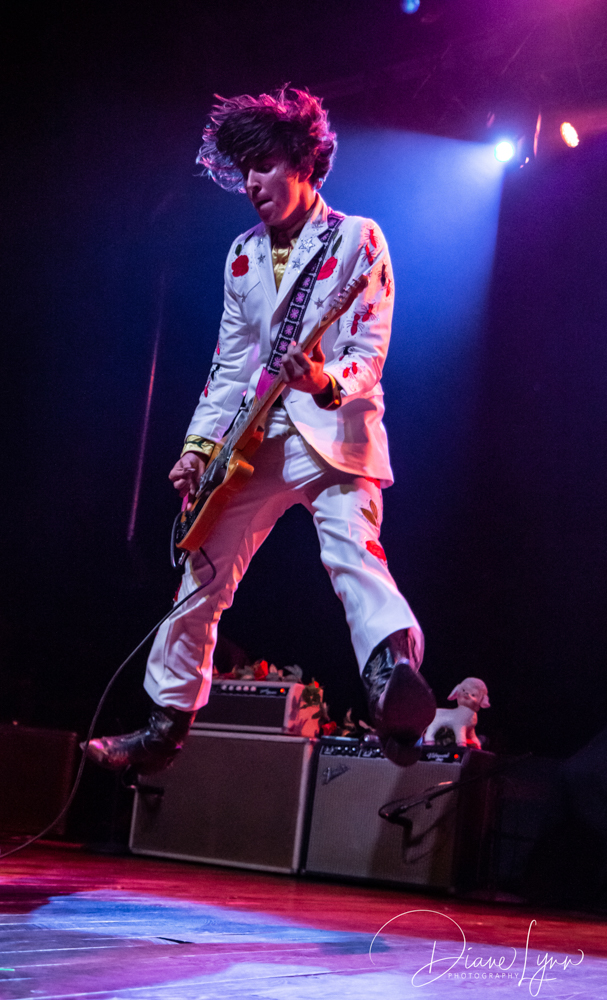 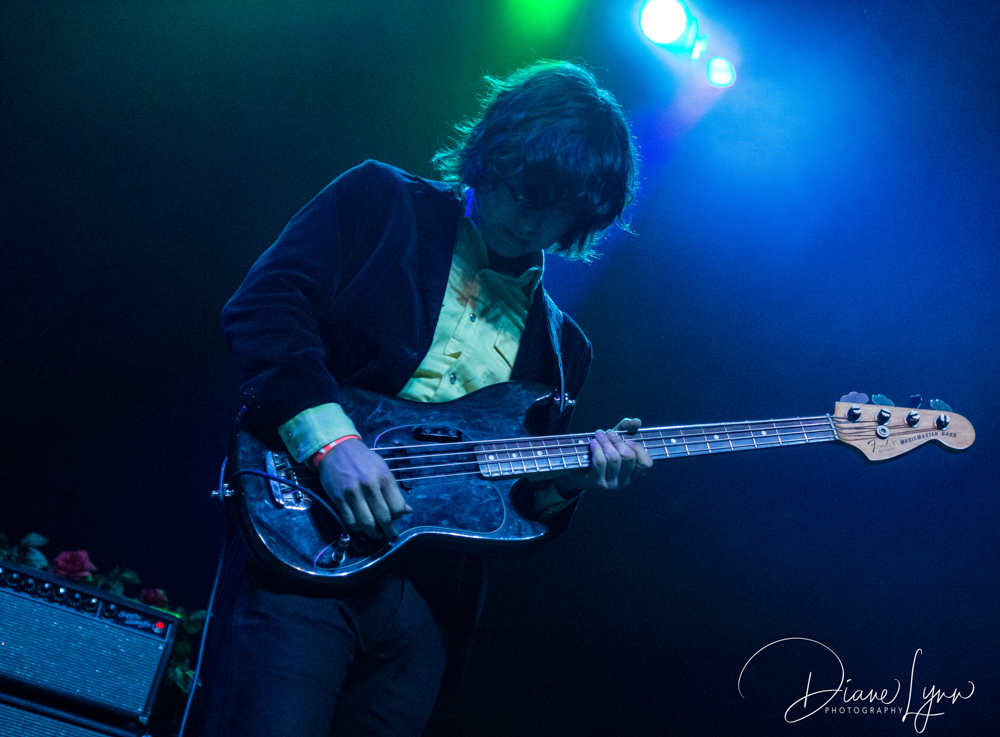 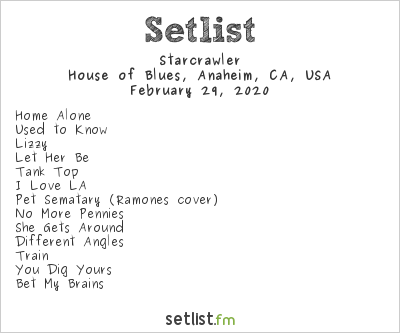 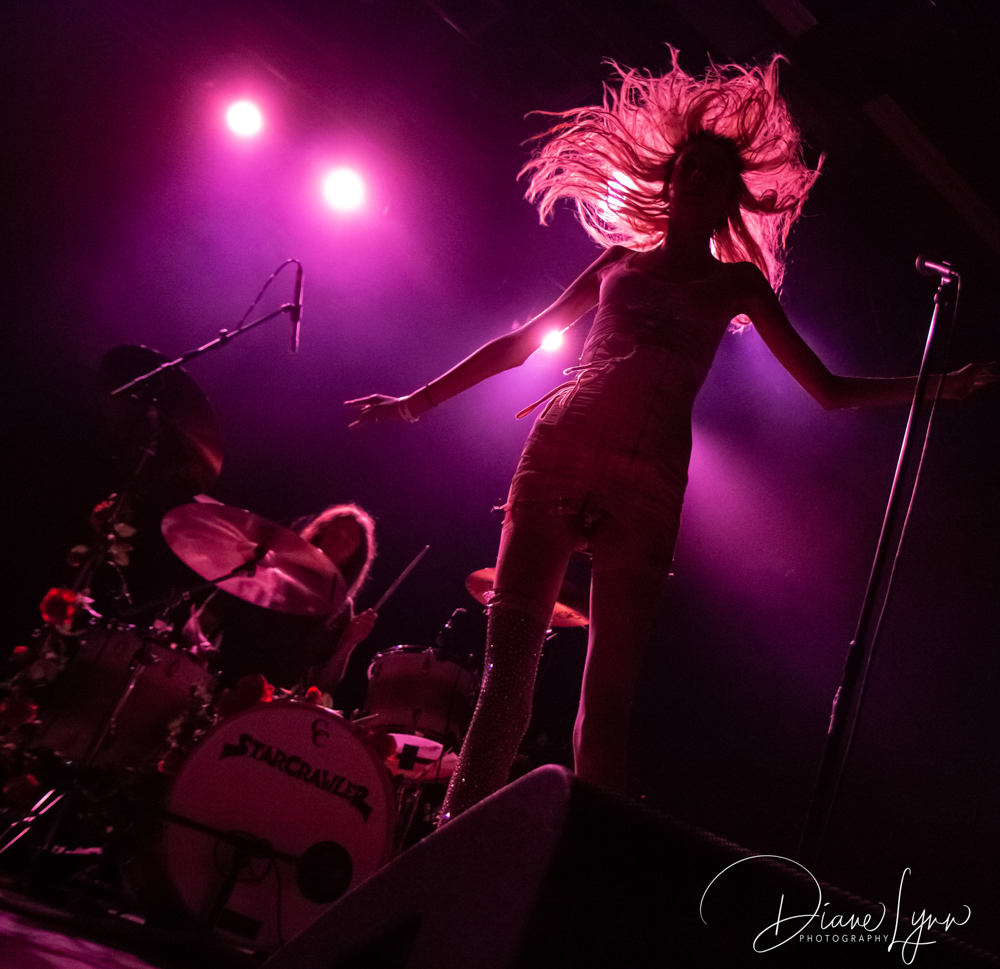