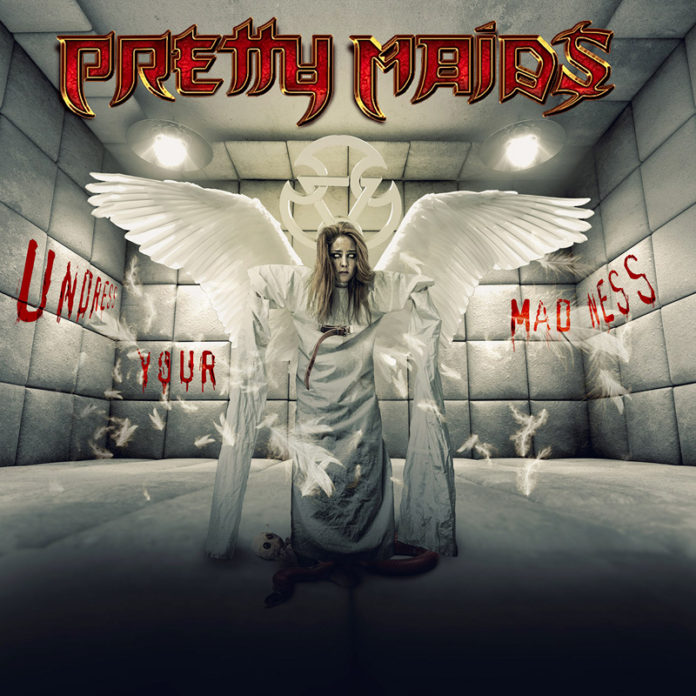 With their sixteenth album, “Undress Your Madness“, Pretty Maids continue their purple patch of blending the old skool metal influences with a more commercial approach to produce a mature sounding accessible album that has something for everyone.

Opener and first single, ‘Serpentine’, has the same driving energy as ‘Hypocrisy’ (the Nordic Union single that Ronnie Atkins collaborated on with Erik Martensson from Eclipse) and is super strong full of impact and power. ‘Undress Your Madness’ continues to harness this Bezerker energy and strength.  ‘Firesoul Fly’ and ‘Shadowlands’ are still catchy, but more in an aor vein.  ‘Will You Still Kiss Me (If I See You in Heaven)” which has an added poignancy in the light of Ronnie’s recently publicized battle with cancer, has a lovely lyrical guitar solo and along with ‘Strength of a Rose’ show the softer side of Pretty Maids. ‘Runaway World’ has the trade mark Pretty Maids sound and remains firmly in hard rock territory, but is also highly melodic. ‘Slavedriver’ is more hardbittenly metal and is Ronnie in pissed off mode delivering a passionate message. ‘Black Thunder’ digs deep into the roots of the band for a straightforward delivery of a short, sharp, shot of rock.

When he found out he was seriously ill Ronnie believed in this record enough to continue doing the PR for it despite impending chemo. Such passion and commitment is reflected in the contents of this album which is a fine continuation of the Pretty Maids legacy.