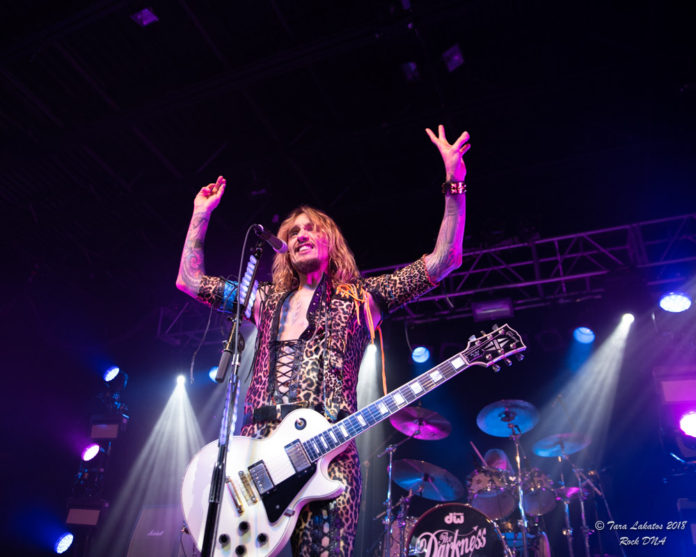 The Darkness’ Tour de Prance danced its way into the Starland Ballroom in Sayreville, NJ on April 21, 2018. 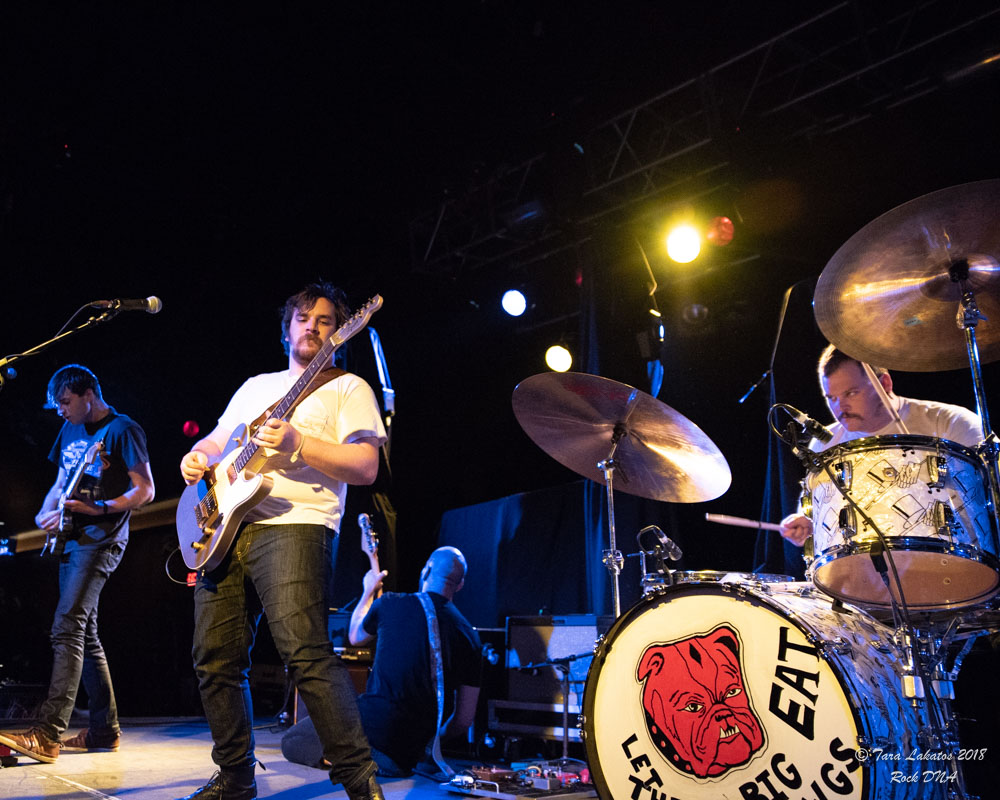 With a name like Diarrhea Planet I wasn’t exactly sure what to expect.  They were born out of a college dorm room at Belmont University, releasing their debut album in 2009 named “Aloha”.  The lights went down and out walked a lot of musicians; four guitarists, a bassist and a drummer.  Jordan Smith (guitar, vocals), Emmett Miller (guitar, vocals), Brent Toler (guitar, vocals), Evan Bird (guitar), Mike Boyle (bass) and Ian Bush (drums).  At this point I was thinking how this all going to work; is it a jam band or a train wreck waiting to happen.  The answer was neither; it was a refreshing melodic punk sound.  Their songs relied on strong harmonies both vocally and musically.  The guitar parts intertwined but never got lost in each other. 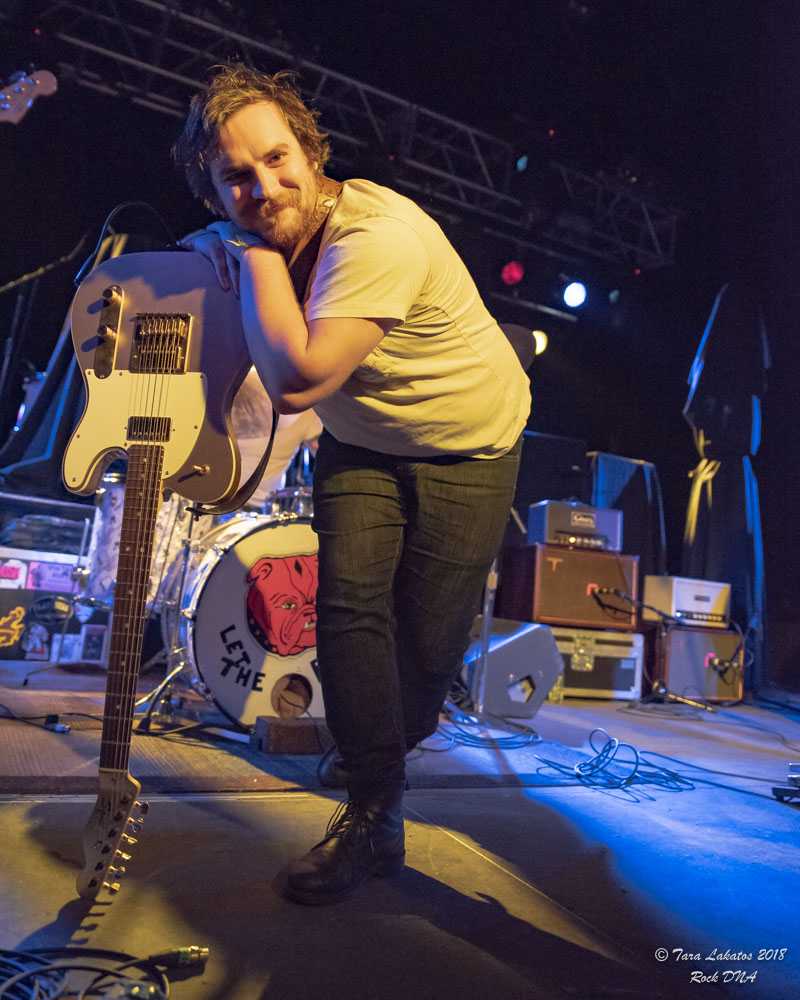 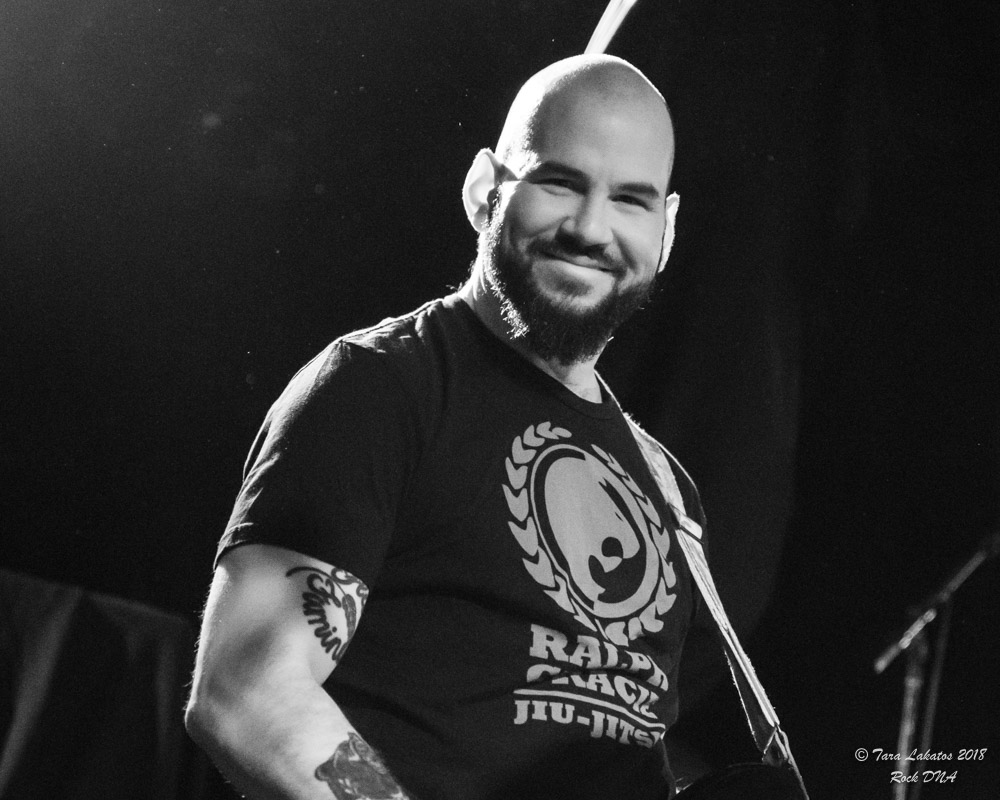 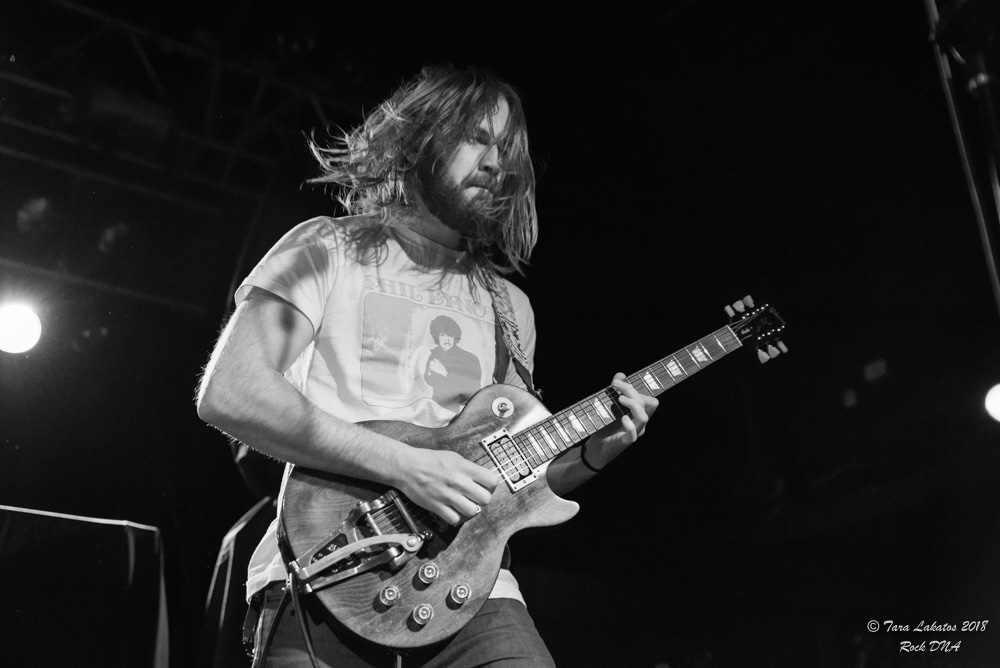 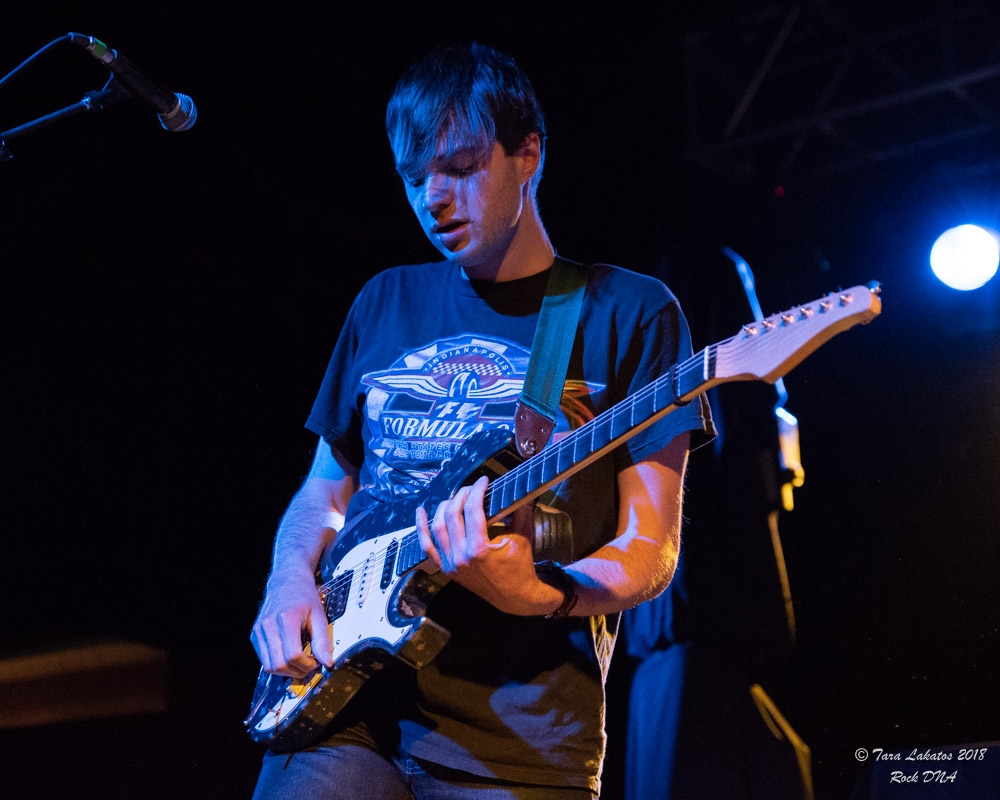 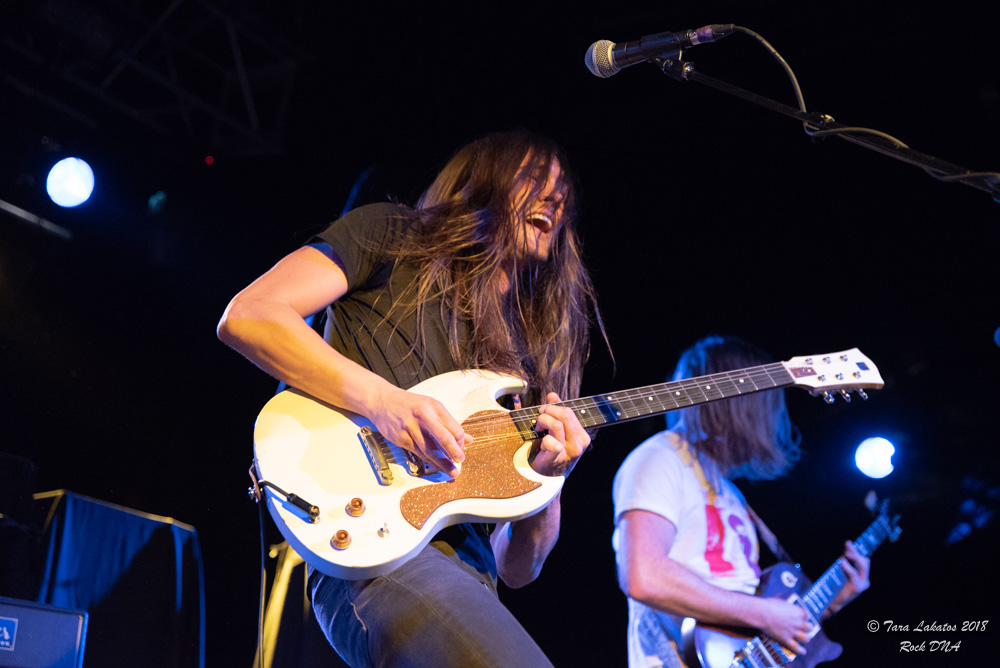 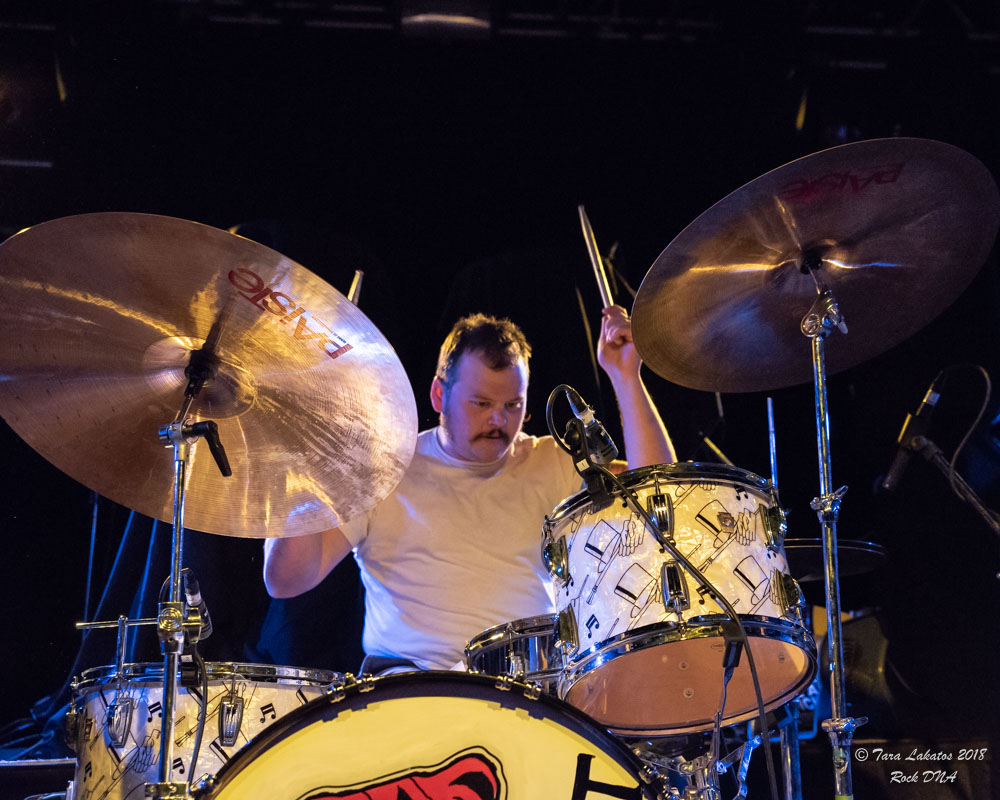 Diarrhea Planet hammered out 9 fast paced songs in their short opening set.  They played 3 tracks off of their 2013 release “I’m Rich Beyond Your Wildest Dreams”.  They started their set with “Lite Dream” and “Separations” and ended with “Emmett’s Vison”.  They also played “Raft Nasty” off their critically acclaimed album “Loose Jewels” released in 2011.  The only song they played from their most recent album was Bob Dylan’s “Grandma”; this song has a thumping bass line and a bunch of fun riffs. 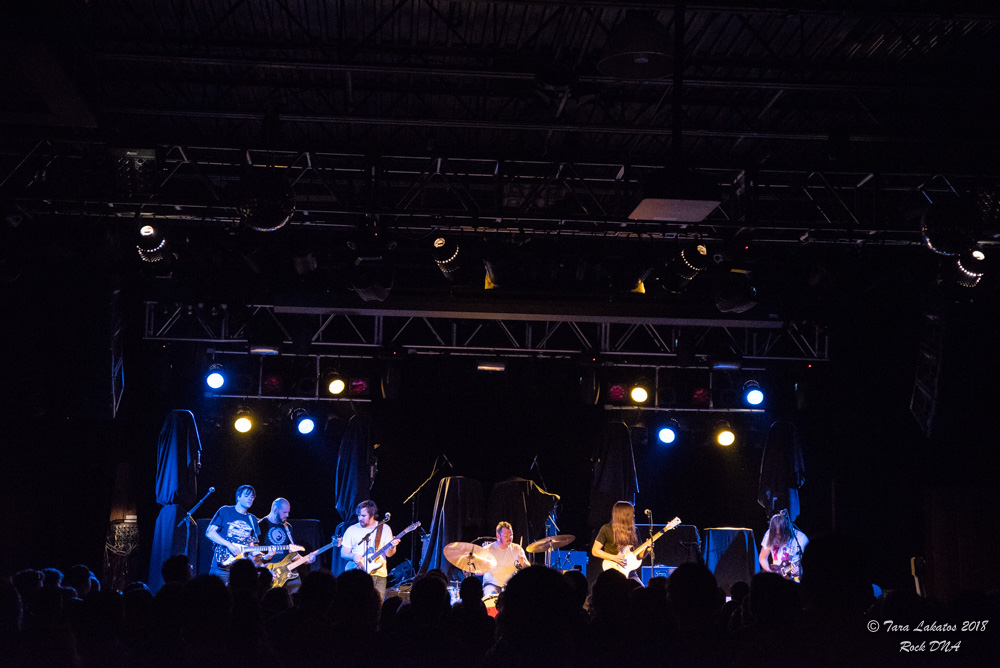 The advantage of having four guitarists is having the ability to create layers of sound without having to use tracks.  The sounds have an amount of depth that your normal rhythm and lead guitarist combo cannot create.  They put on an entertaining set and I would definitely see them again. 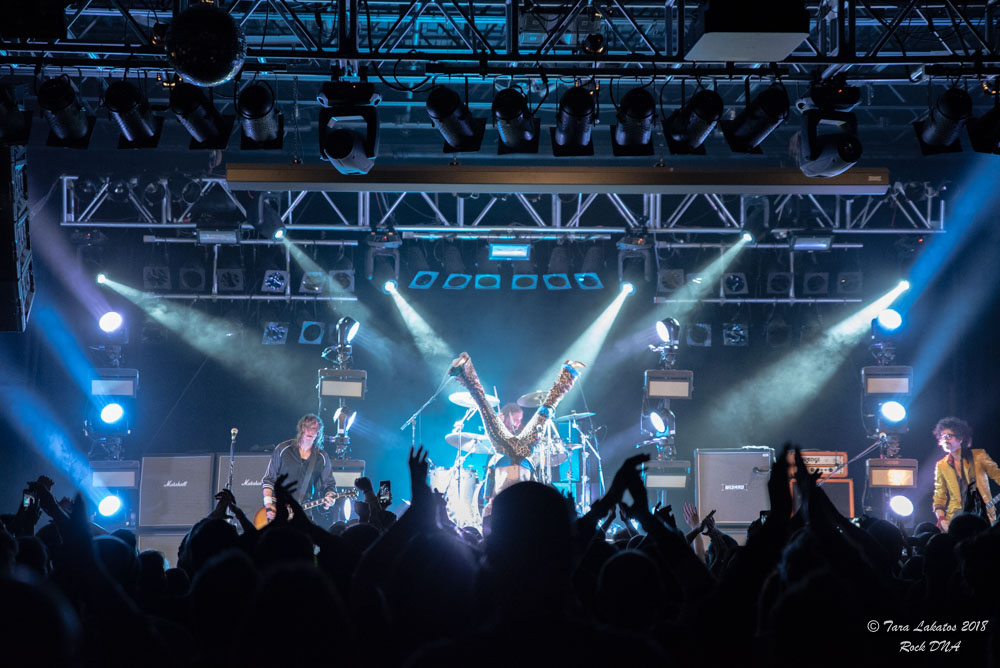 The Darkness is a British rock band consisting of Justin Hawkins (vocals, guitar), Dan Hawkins (guitar, vocals), Frankie Poullain (bass, vocals) and Rufus Tiger Taylor (drums).  They blew onto the rock scene in 2003 with a little song named “I Believe in a Thing Called Love”, from their debut album “Permission to Land”.  I was blown away back then by their unique sound.  Despite their name they are anything but dark.  The Darkness is a lighthearted, fun rock band that has a lot of flair and pzazz especially from Justin and Frankie.  Justin mixes smooth rock vocals and a crazy falsetto to create his one of a kind vocal style.  He hit the stage clad in a leopard print jumpsuit and gold boots while Frankie was dressed in a leisure suit straight out of “Saturday Night Fever”.  These two were balanced by their counterparts, Dan and Rufus, who were dressed in regular rock star stage attire. 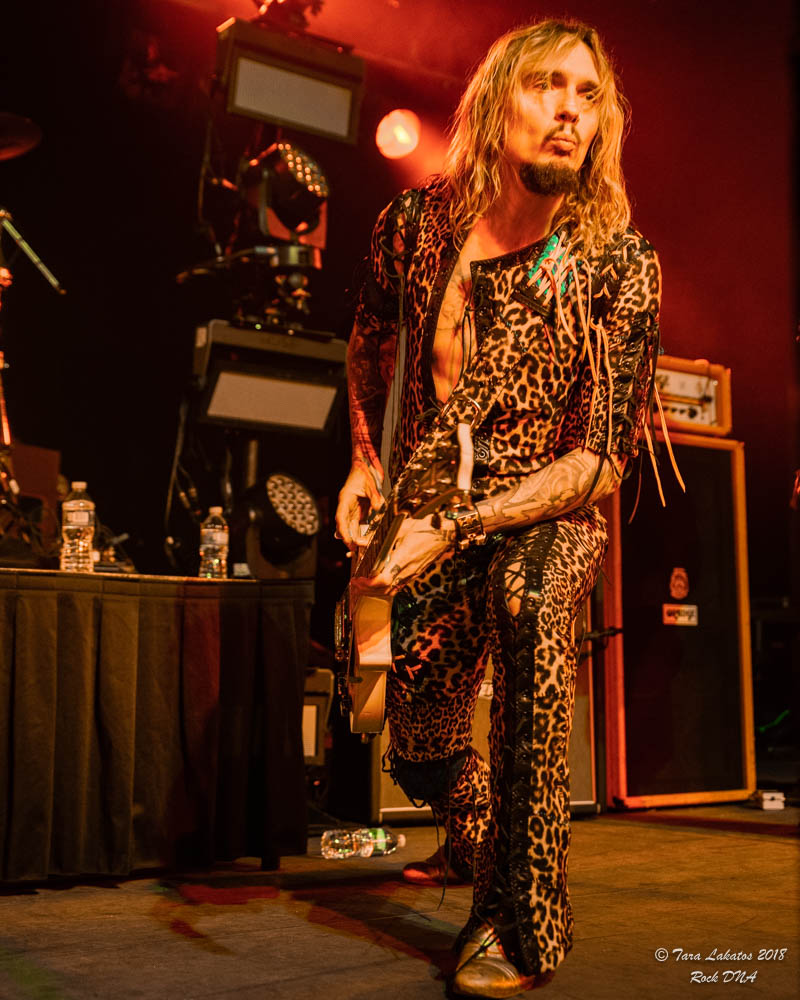 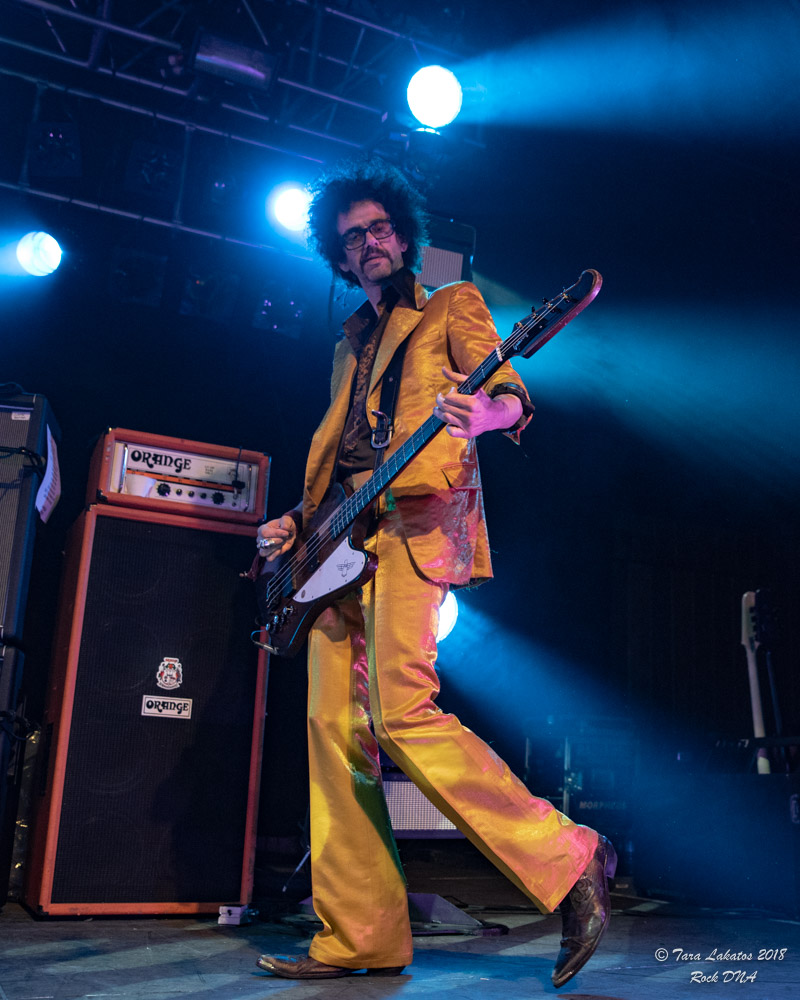 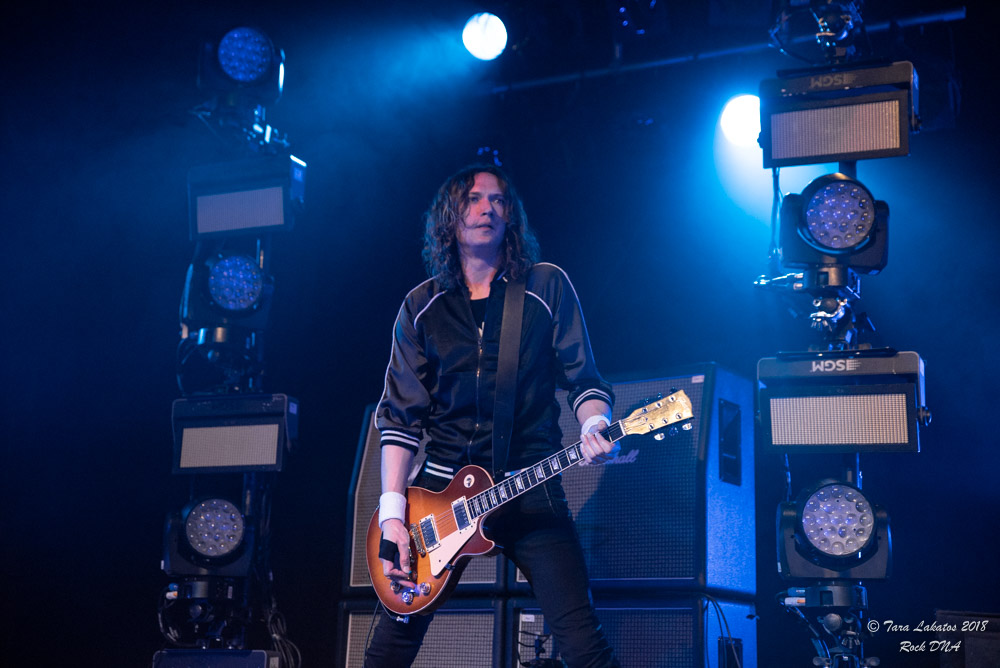 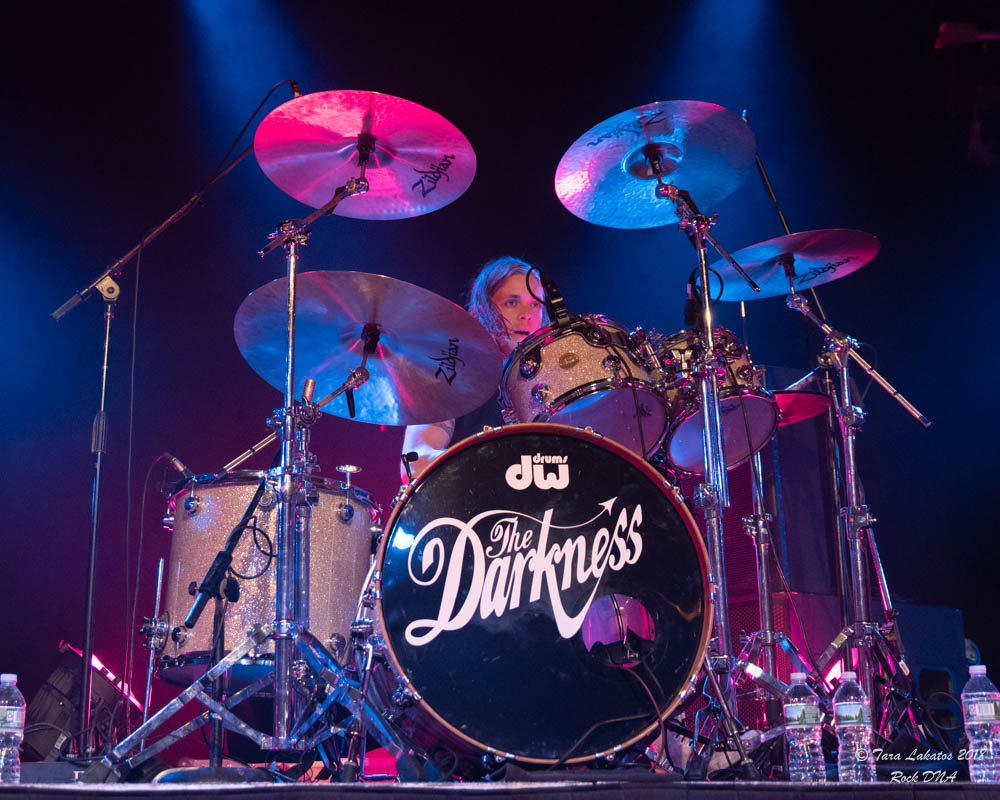 The Darkness opened their set with “Open Fire” from their 2015 release “Last of Our Kind”.  The opening bars of the guitar riff followed by Justin’s vocals sound much like Van Halen in their hay day.  The guitars during the vocal breaks take on the sound of a synthesizer, making this song very much have a vintage 1980’s metal sound.  This drew the crowd in and had them bouncing to the beat, some with metal horns in the air.  They then moved onto “Love is Only a Feeling” off their debut album. This track is more of a power ballad showcasing Justin’s vocals.  Without having to say, Justin is very entertaining to watch because of his massive stage presence however, with this song you just wanted to close your eyes and hold onto the moment. 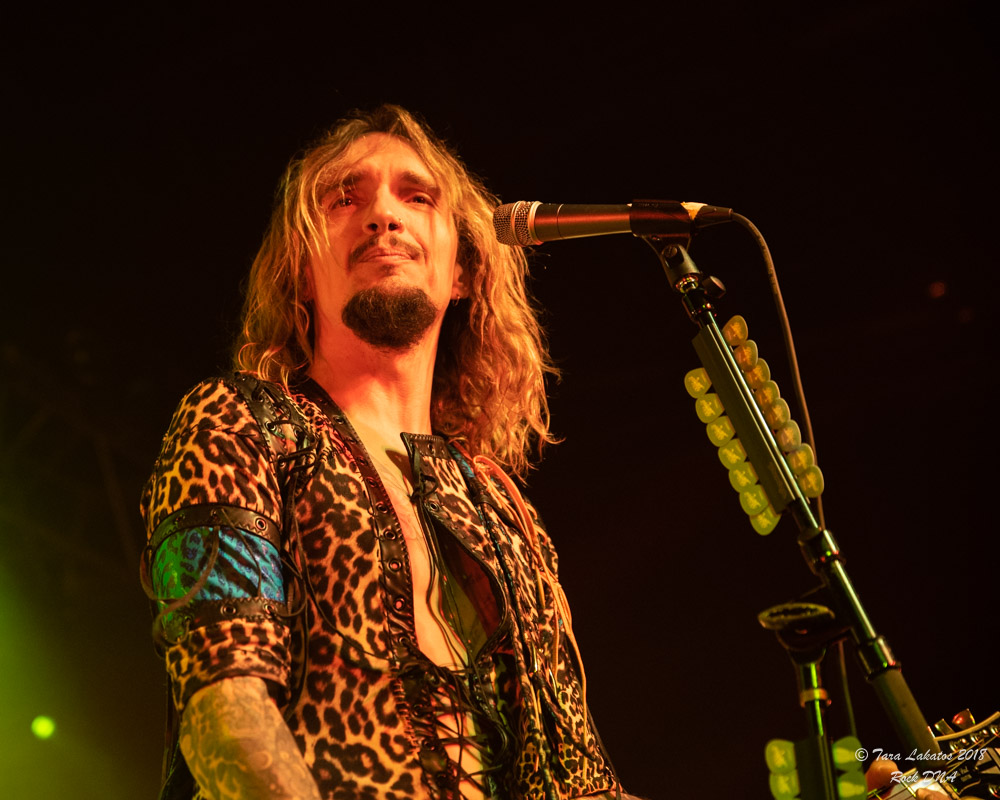 Normally the photographers are given three songs to capture a lifetimes worth of moments but Justin stopped us from leaving and asked us to stay for one more song because he was going to do an epic jump off of the drum riser at the end. 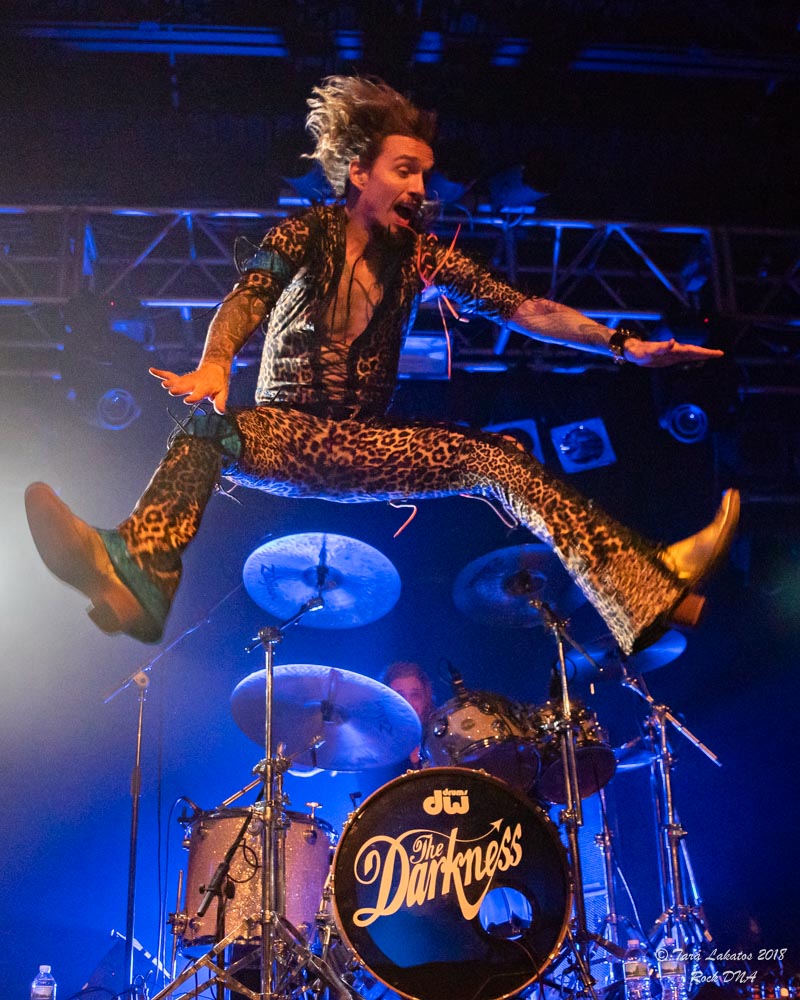 The 4th song was “Black Shuck”, a song that has a bluesier, southern rock vibe to it.  While Justin tends to steal the spotlight, Frankie, spent most of this song chugging his bass in a larger than life wide stance.  He seamed to take up half of the stage, commanding attention to be drawn to him.  As promised, Justin hopped onto the riser at the end of the song and probably jumped close to 10 feet off of the ground, thankfully I was in a position to catch him mid air.  I’m grateful that The Darkness were very cordial to the photographers, it was quite refreshing. 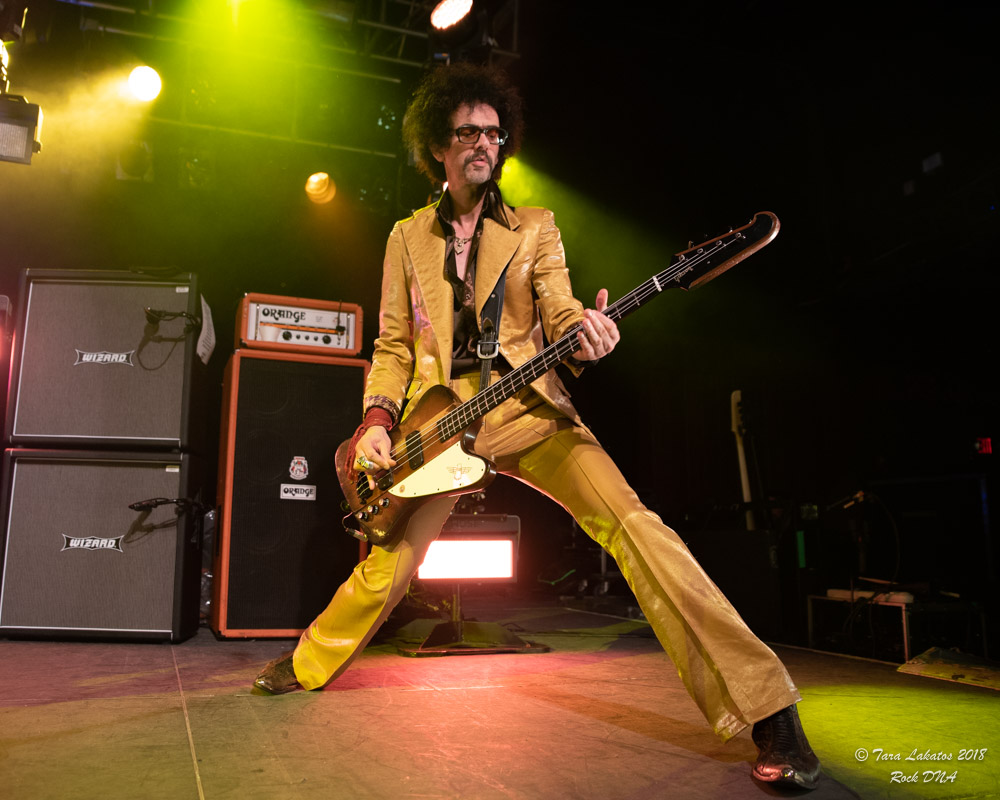 The Darkness touched upon several tracks from their newest album “Pinewood Smile” including “Southern Trains”, “Buccaneers of Hispaniola” and a personal favorite “All the Pretty Girls”.  This song features Rufus pounding out a swing beat.  While hidden mostly behind his kit this guy is a monster drummer. 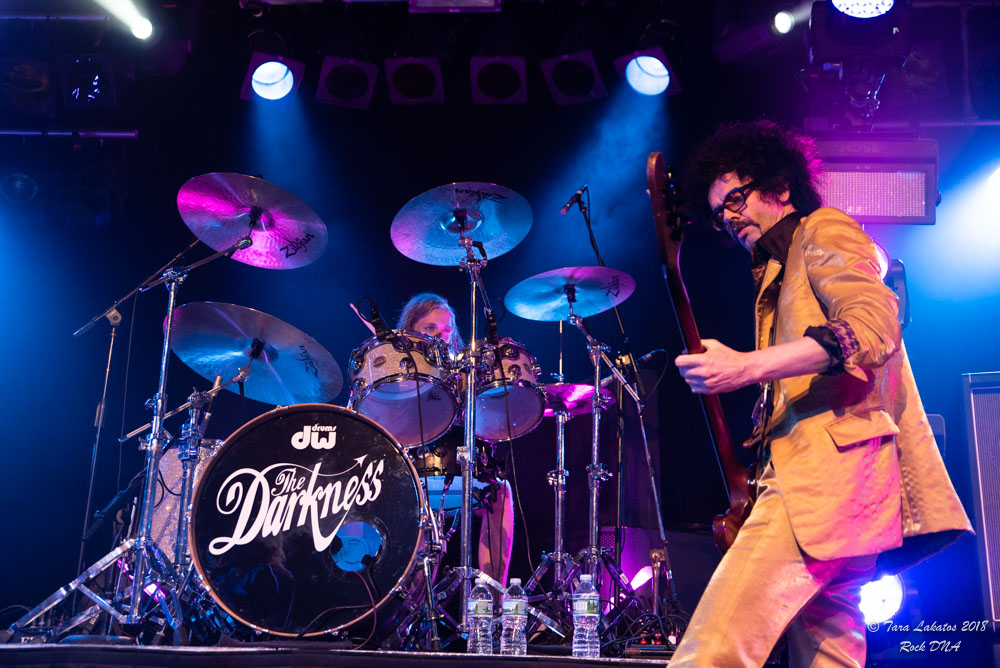 They ended the night with a couple of encores.  The Darkness walked out and Justin lost most of his clothes; wearing just shorty shorts with socks and shoes.  I believe if there weren’t laws against it he would have proudly taken the stage in the buff.  First was “Japanese Prisoner of Love”, this song has cool harmonies over Justin’s falsetto.  Justin and Dan blend a masterful riff and rhythm during this song giving it a heavier feel.  They ended the night with their original smash hit, “I Believe in a Thing Called Love”: The moment everyone had been waiting for all night. The audience on this night was small but mighty.  From the first note the crowd erupted into a frenzy of dancing, falsetto singing and fists in the air.  What a way to end an insanely entertaining and energetic night. 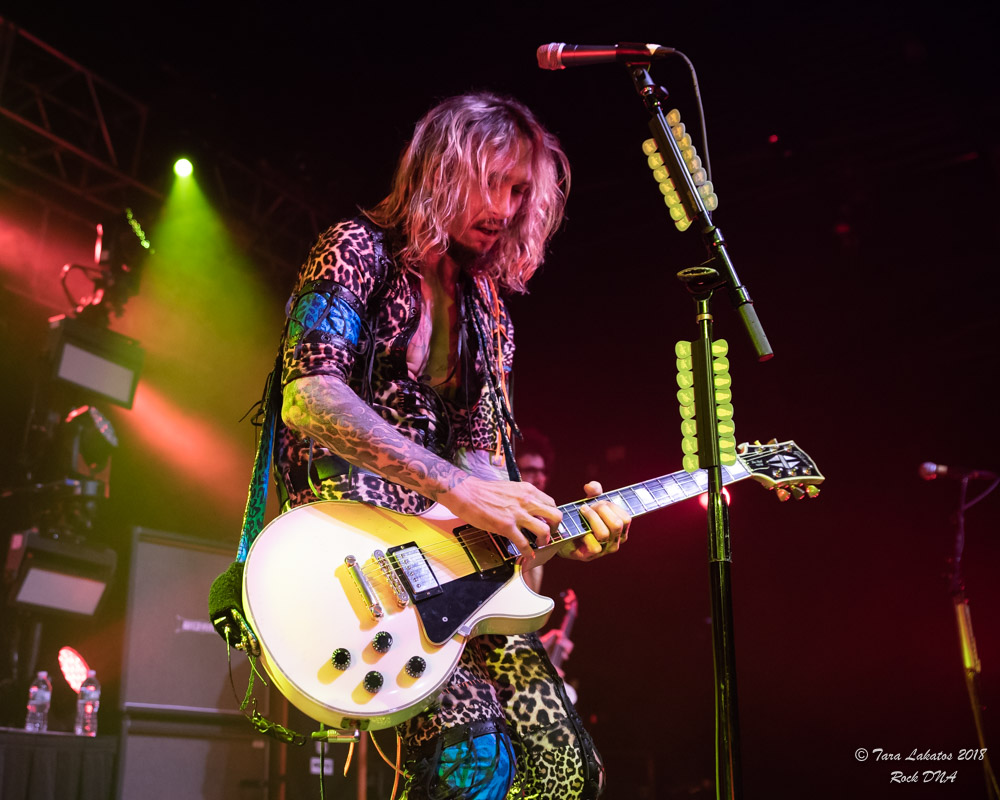 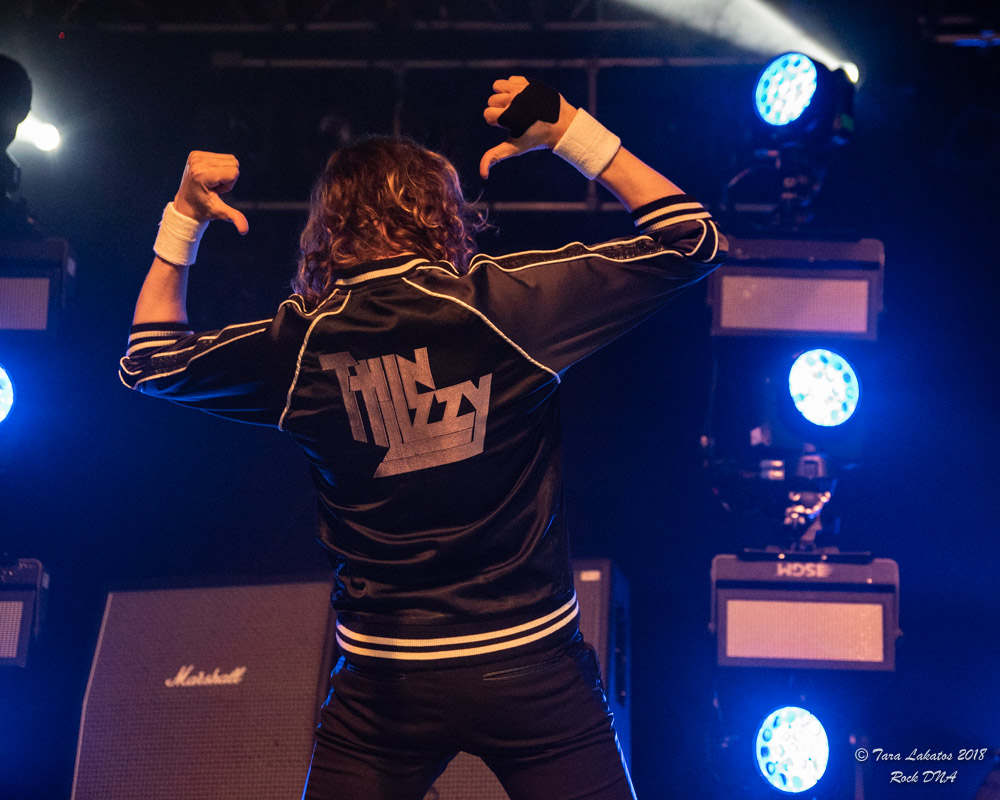 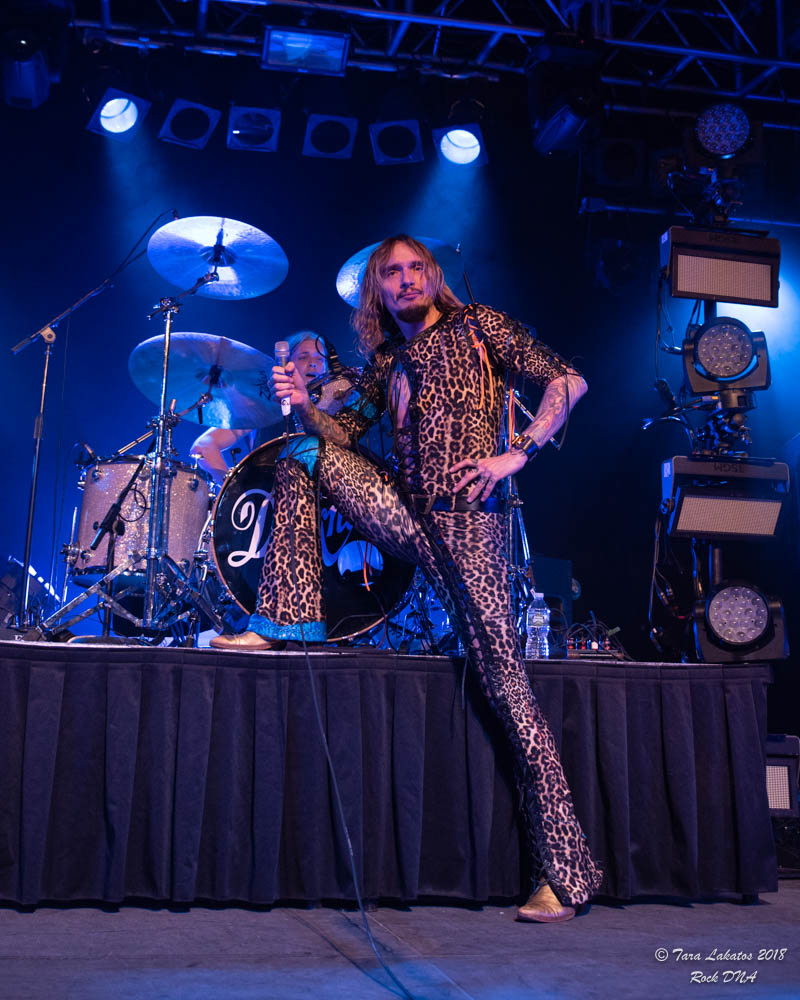 The band threw out guitar picks and drumsticks and proceeded to walk off stage.  The crowd chanted for one more song and they willingly obliged.  Justin grabbed a fans cellphone to pull up the lyrics to the Proclaimers “500 Miles”.  This was now a group concert as the crowd was fully involved in a sing along.  They played most of the song before changing over to their own song “Love on the Rocks With No Ice”. This song was a perfect way to end the night; it has a straightforward rock riff that could fill the hallows of the biggest arena.  Justin hopped onto a crew members shoulders and rode through the crowd while singing and playing his guitar.  It’s rare to see a guitar solo in the back of a venue, what a treat for the crowd.

While this show was in a smaller venue the music could have easily torn down Madison Square Garden.  Diarrhea Planet was a solid opener with a lot to offer.  They definitely approach rock and roll from their own angle and do not stick to the prescribed formula.  The Darkness has a lot of loyal followers that have stuck with them through the years.  This band has broken up, reformed, and wound up mostly where they started.  They performed for nearly two hours and gave a stellar performance.  They only have a handful of dates left on this tour so hopefully they come back state side very soon. 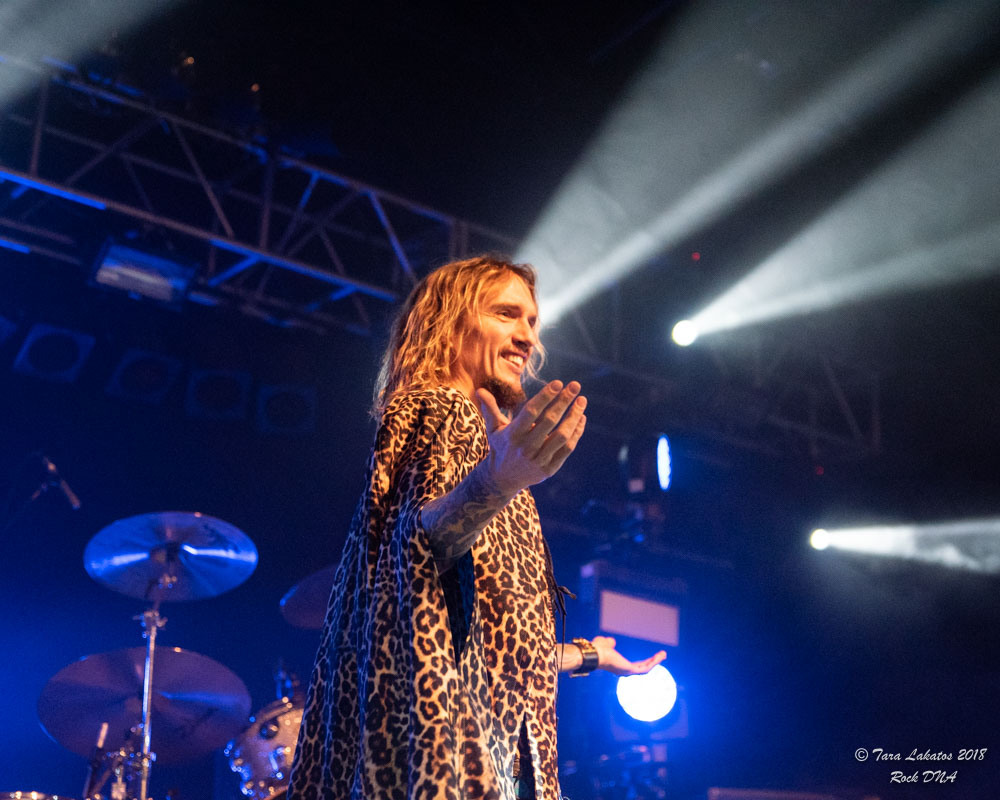