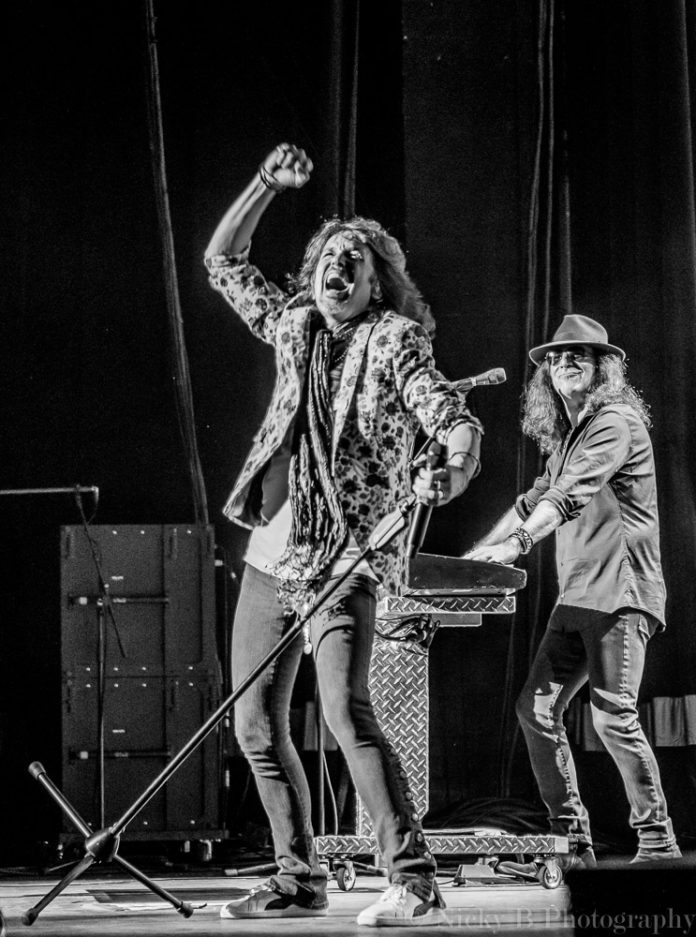 Foreigner have been hailed as one of the most popular rock acts in the world.  With an impressive music arsenal, they continually sell out  tours, and their albums sales are now exceeding 75 million.  Foreigner were originally formed in 1976 by English musician Mick Jones.  Mick is still at the core of the band but is now the only original remaining member.  The line up of the band has changed over the years and in 2005 former 80’s metal band Hurricane lead singer Kelly Hansen replaced Lou Gramm as lead vocalist for the band. The rest of the band are – Tom Gimbel (rhythm guitar/sax), Jeff Pilson, formally of Dokken (bass), Michael Bluestein (keyboard), Bruce Watson (guitar), and Chris Frazier (drums). 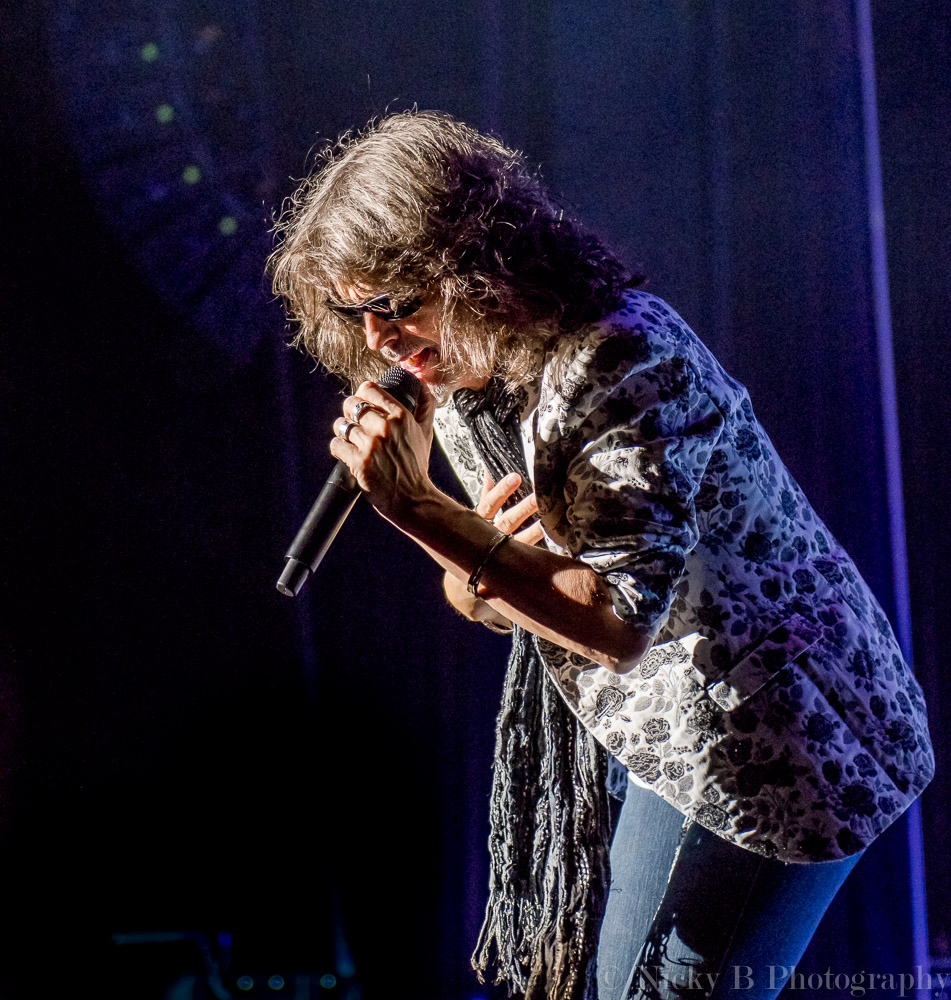 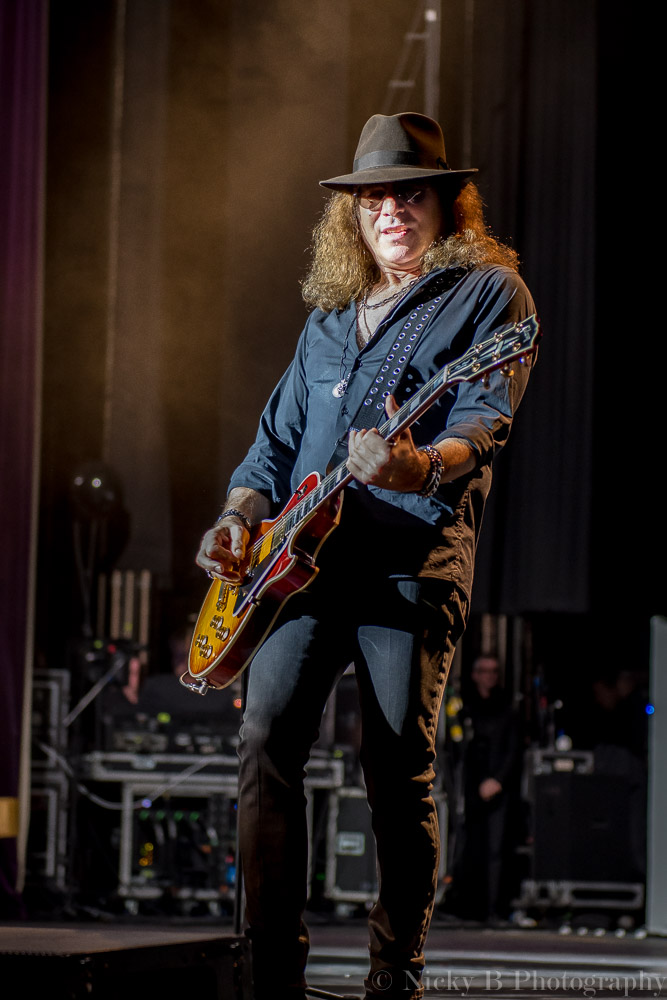 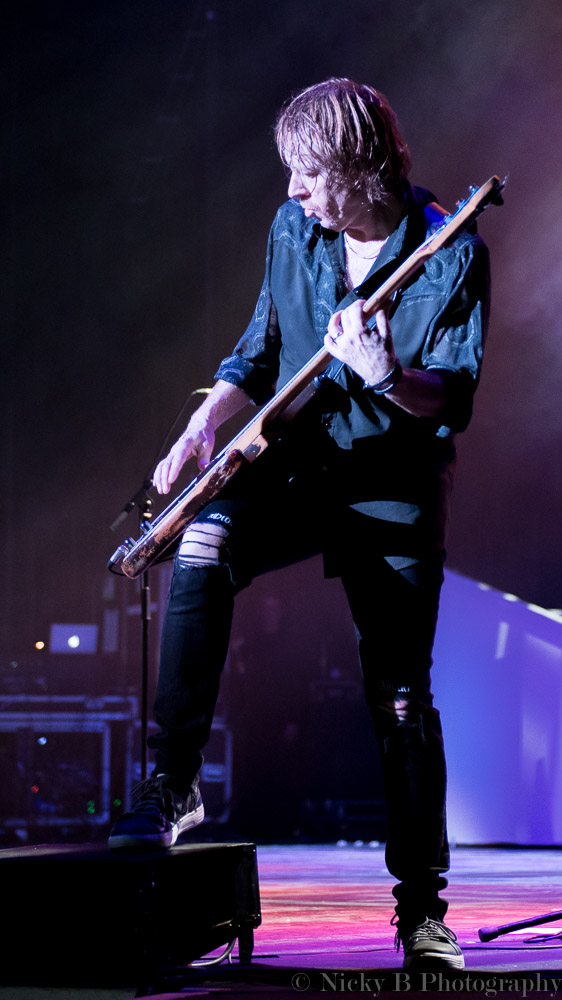 Foreigner are at the back end of their 40th year anniversary celebrations world tour.  The last few dates of the tour are rescheduled shows from November 2017 when the tour was postponed due to “reasons beyond their control”. 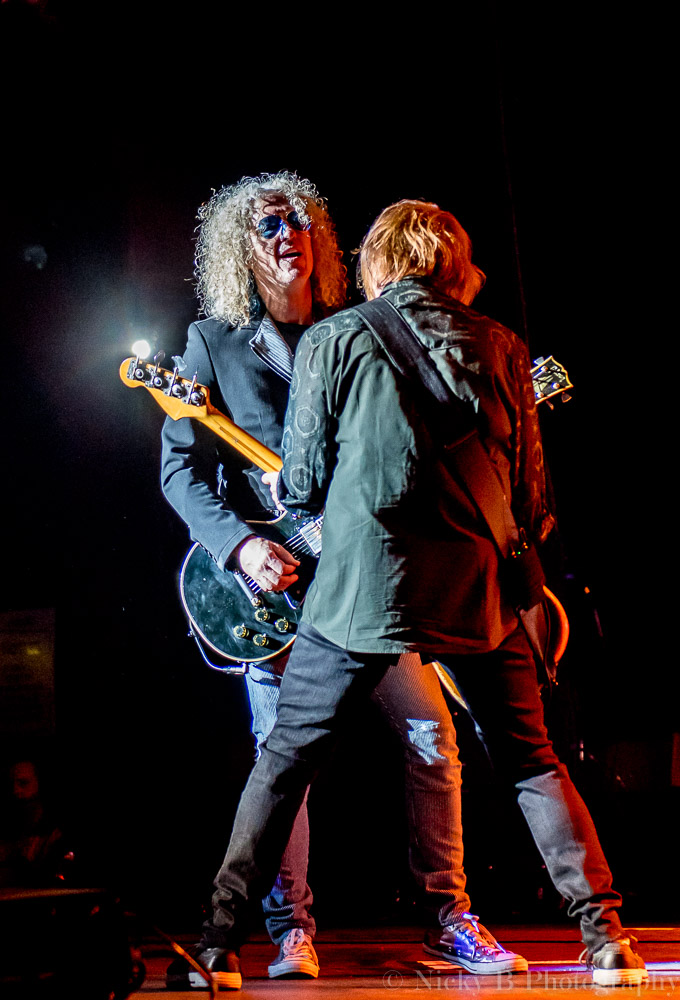 Foreigner began their set with ‘Double Vision‘ then straight into ‘Head Games‘, it was clear this was going to be a high energy set.  Kelly dressed in a floral jacket and studded flared jeans has a superb live voice and seems to possess unlimited energy as he bounces around the stage like a man half his age.  Half way through ‘Cold as Ice‘ he jumped off the staged and made his way around the audience much to the delight of his fans, especially the ladies. 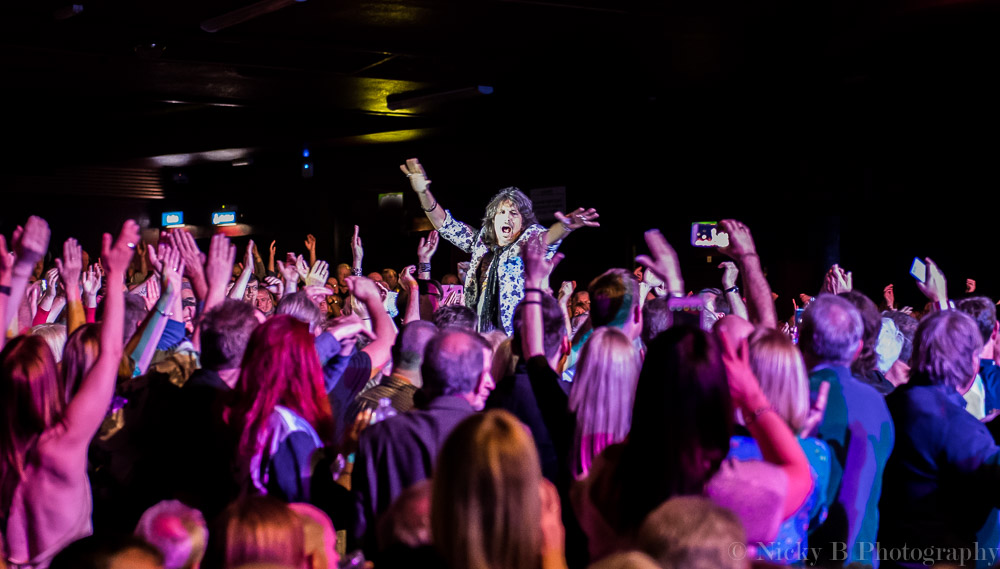 The absence of Mick Jones on stage did not go unnoticed, but then after Kelly had introduced the rest of the band Mick was introduced and walked out to the stage to a huge roar and applause from the crowd.  The band then continued with hit after hit.  One of the highlights for me was the sax solo from multi-talented, Tom Gimbel during ‘Urgent‘ …pure genius.  Not only does he play guitar, he plays flute, keyboards and the saxophone superbly. 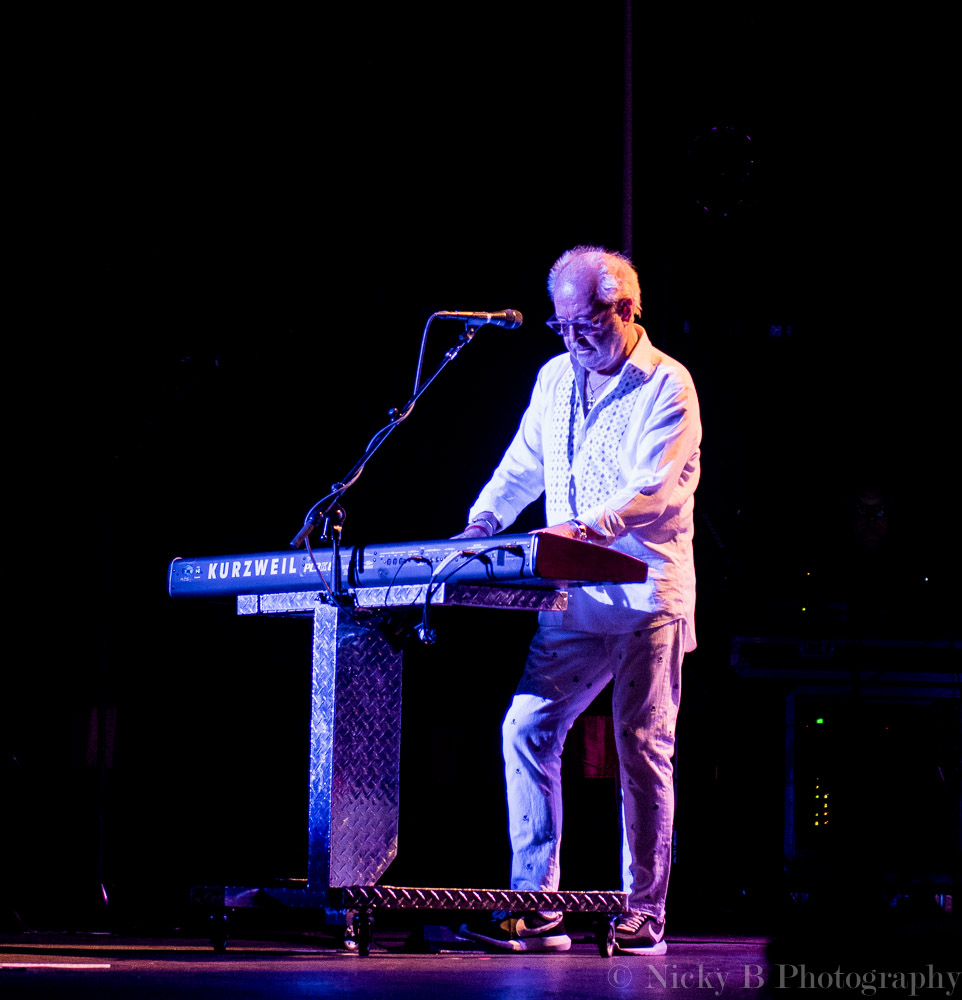 Kelly Hansen talked about the age of the crowd and suggested that people over 40 (which 90% were) should get in touch, reach down into the grey matter and find the inner rock and roller you used to be.  The band then broke out into a very high energy ‘Feels Like The First Time‘ one of the hits from some 40 years ago.

The encore brought ‘Long, Long Way From Home‘ and the mega hit ‘I Want To Know What Love Is‘ where the band were joined on stage by a local school choir.  Each show has invited a local school choir to join them.  The scheme raises money for music in school programs.   The show was closed out with ‘Hot Blooded‘. 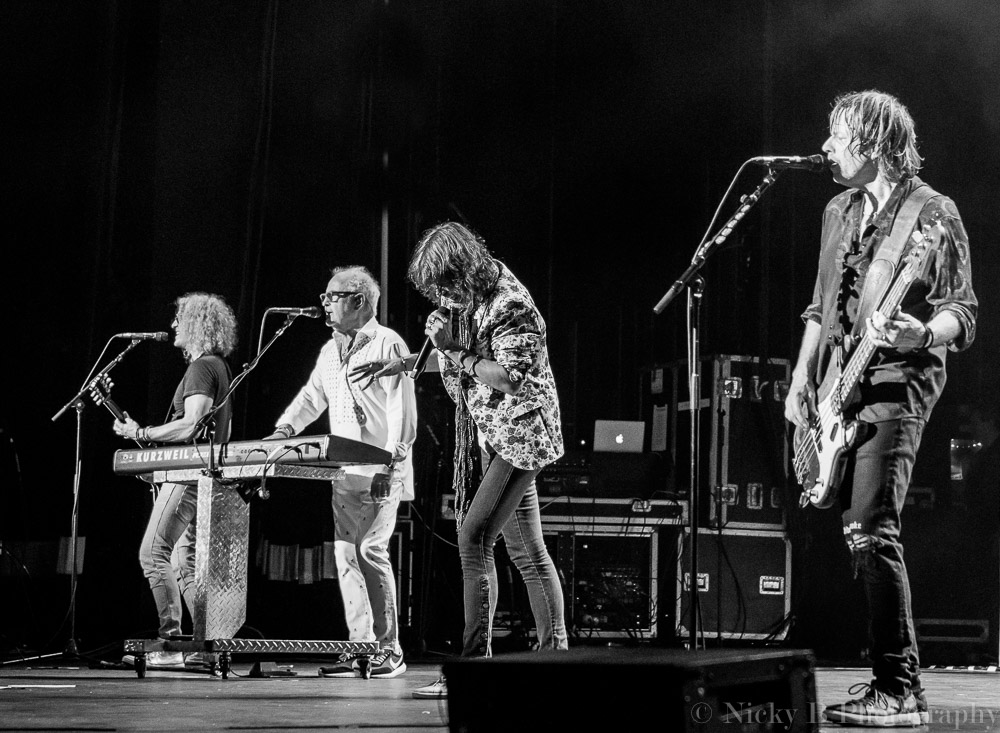 Foreigner left the crowd feeling fully satisfied they had heard all the hits they were hoping to hear and every single song was done with high energy and passion.  A truly feel good show! 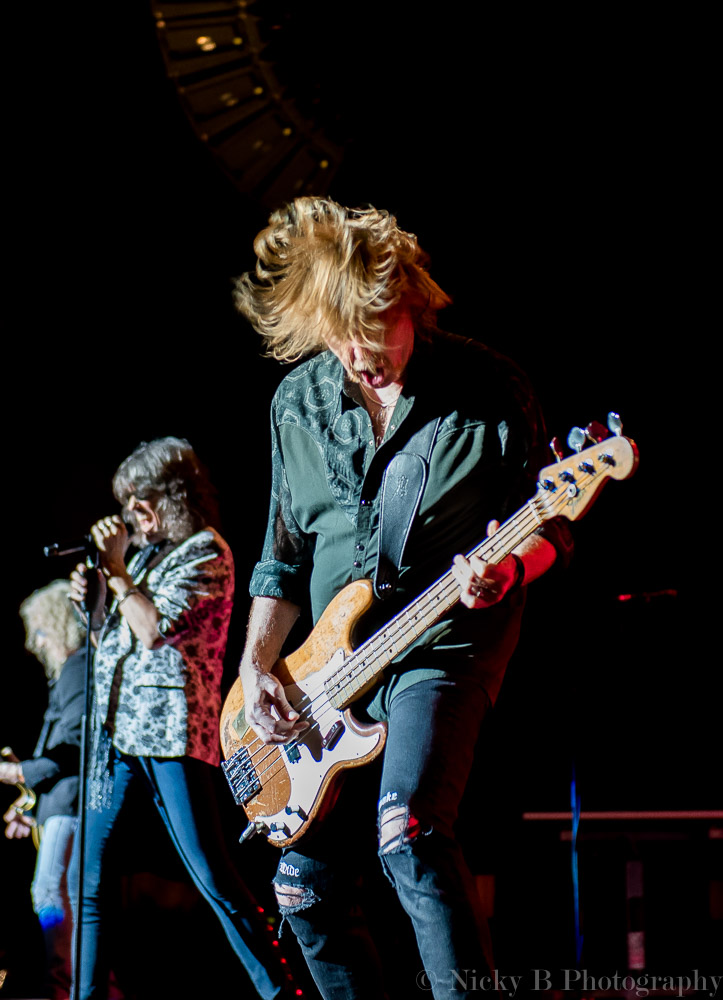 Foreigner start a new ‘Juke Box Heroes‘ tour in June 2018.  Joining them on the tour are Whitesnake and Jason Bonham’s “Led Zeppelin Evening“.

The support acts for tonight’s show were singer John Parr, most famous for the track “St Elmo’s Fire”, who did a short acoustic set.  Parr was followed by British, blues rock, guitarist and singer Joanne Shaw Taylor.  Unfortunately, due to photo pass issues I missed John Parr and half of Joanne Shaw Taylor’s set.  However, the part of her set I did see was impressive.  Shaw with her very casual look and deep bluesy voice captivated her audience and she was clearly enjoying herself too.