Yngwie J. (Just Where Are You?!) Malmsteen

with support from Sunlord and Images of Eden

In the day and age of Cancel Culture, Yngwie didn’t disappoint by ACTUALLY canceling his show at the very last minute after we sat through a mandatory meal and two opening acts.  More on that in a moment…

Was the night a total bust?!  No, No it wasn’t.  Sat at the front with a cool table of Metal Heads.  We did what metal heads do.  We talked music and let everyone know how many guitars we had. (James (Live From The Pit) won with 32) 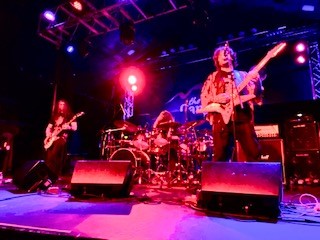 The whole night I thought the singer was calling the band “Slum Lord”. But they are actually called Sunlord.  I’m going to call them Motorhead-Lite, because that’s what they were… and I mean that as a total compliment.  If you’re going to emulate a metal band, make it Motorhead.

The band from NYC, consisting of singer/guitarist Alfonso Ferrazza, a bassist who’s name I can’t find anywhere, and fill-in drummer, Dr Jones (Who could have fit in nicely in the Blues Brother’s band) were a killer opening act and should have been the headliner this evening.

Alfonso is one funny mofo performing what amounted to a mini stand up act between songs.  Although he wasn’t a fan of everybody eating during their set, he handled the seated, dinner theater crowd with ease. The crowd definitely dug these guys.

Songs included “Turn Me Loose“, “Vigilante“, “Forbidden Witch“, “Like a Champion” and my favorite “Do Your Push Up“.

Even if Yngwie doesn’t show up to YOUR gig, go check these dudes out.

Images of Eden are a prog. band from Arizona.  The singer had Bruce Dickinson stage moves, a voice similar to Geoff Tate and the message of “Stryper” if Stryper had spent their formative years in AA.

Don’t get me wrong, the band were just fine.  They preached a very positive message and even ended with Triumph’s “Fight The Good Fight” (which will get my toe tapping anytime)

It seems they’ve all gone through their struggles with demons and kept reminding everyone to focus on the positive and know that you can come through whatever it is you’re going through. Who doesn’t like a little bity of positivity these days…

Little did we know we were all about to go through our own struggle coming to grips with an Yngwie Malmsteen show with no Yngwie.

Yngwie J.(okes on YOU) Malmsteen
Well the Joke was on us.  For those paying attention there were clues.  No drum kit set up, the opening acts (who were meant to start at 6pm) didn’t go on until 8pm, and apparently Yngwie was also a no show the previous evening in Reno?!
Look, I’m sure it was unavoidable.  Reports said he was “puking in his tour bus” although one person allegedly saw him standing side stage at one point during one of the opening acts.  Will we ever know?! Probably not. Do we give that much of a shit, really? Again, Probably not.
Quotes of the evening included: “What the Fuck“, “That’s some Bullshit“, “I flew here from Seattle to see this show” and from Chip Smith from California Rock News, “I spent $20 on 7Up!!!”
Someone even tried a mini “Fuck Yngwie” chant that went nowhere.
I was lucky enough to be gifted my ticket (was that foresight?!) so I literally got what I paid for.
The Canyon Club were very generous in offering patrons the opportunity to attend one of Yngwie’s upcoming shows this weekend (do so at your own risk) as well as free tickets to everyone who wanted them for upcoming shows at the venue.  After all, not their fault.
You have to find your silver lining right?
Here was mine: Got to meet some new people, hang with some friends and have a very nice dinner.
This was my dinner: 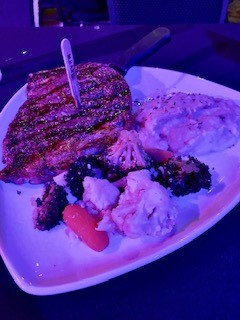 These were my friends:
Yngwie’s Full Setlist:

If YOU still give a shit about Yngwie, check out this past review and pics from a show I covered in 2017  He actually showed up for this one!